Rockstar has left the busy streets of Liberty City and has headed for the dying Wild West for the spiritual successor to Red Dead Revolver. The game takes place in 1911 in a fictitious area somewhere along the U.S./Mexican border and follows the story of former outlaw turned rancher, John Marston. But Marston can't seem to escape his past as he's forced by government agents to hunt down 3 surviving members of his old gang after the agents abducted his wife and son. Unfortunately for John, his former friends each lead a gang of their own and now Marston must try to make allies who will aid him in fighting the gangs. This pretty much describes the drive behind most of the missions, a simple ‘I’ll scratch your back if you scratch mine,’ which leads Marston into meeting a wide array of characters.

The game world is quite large and in between missions, you are free to explore and do various challenges and play mini-games such as horse racing. One of the most noticeable features in the game is the Honour and Fame system which is similar to the Karma system from Sucker Punch's InFamous series: if you do good deeds such as taking a criminal alive, your honour will increase but if you do act cruelly, such as killing innocent NPCs, your honour will decrease. As you progress through the game, your fame will increase; as you become more famous, people will react differently to you depending on your honour. If your honour is positive, people will act friendly towards you and even offer store discounts. If your honour is negative, civilians will scream obscenities at you but outlaws will generally like you more. However, by equipping a bandana, the Honour and fame system can be disabled.

In an attempt to make the world feel alive, Rockstar added random events such as a person being attacked by wild animals or stage coach robberies. You can then choose to get involved either by saving the victims or helping the outlaws. There are a variety of guns available, ranging from the average six-shooter to sniper rifles and as with some shooters; you start with the weakest and later gain stronger weapons. Gun battle is enjoyable with the array of weaponry and a feature called “Dead-eye” which allows you to slow down gameplay to fire difficult shots or to mow down multiple enemies before they can even react. Even though you will find yourself in multiple gun fights, it’s pretty obvious that Rockstar didn’t design the game to be a Halo or Gears of War killer.

Strong Points: World is large; beautiful and “alive” with random events; Lots to do outside of the story.
Weak Points: A few glitches; frame rate suffers at times; the horses can become annoying.
Moral Warnings: Bad language; high amounts of blood and violence; sexual themes and nudity; minor amount of gore; gambling; racism.

The main mode of transportation in the game is by horse, which can be acquired by 3 different methods. Firstly, you can steal one; the second is to buy one from a general store and the third is to break a wild horse. Even though your horse can be as loyal as a dog (I was able to get my horse to follow me for miles while I drove a stagecoach) it sometimes has a mind of its own; this includes the horse refusing to stand still or refusing to follow a certain path.

The most noticeable glitch, yet rare, is the game confusing animal behaviour with humans, resulting in people running on all fours and attacking you like an animal. The most common glitch happens when a cart hits a bump in the road at high speed which results in the cart launching into the air.

Multiplayer is pretty similar to the free roam of single player as it drops you into the game world and you are free to kill players, npcs and animals alike or simply just explore. Multiplayer works on an experience system and if you enter multiplayer for the first time, you will start at level one with a limited selection of character models, mounts and  some of the weakest guns. As you progress in levels either by attacking gang hideouts or killing legendary animals, you will receive stronger weapons and faster mounts. While you might find high end weaponry while exploring, it will disappear once you leave multiplayer. Besides free roam, there are game modes such as free for all and land grab but I’ve found that very few players play in game modes as the majority seems content just with shooting each other in free roam. I feel that multiplayer doesn’t have the charm of single player, especially if you log on when no one else is playing. 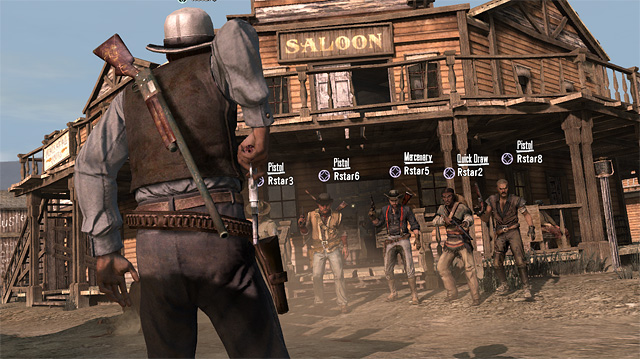 As for morality, there are prostitutes in the game, but Marston can’t interact with them as he remains loyal to his wife. There is one notable sex and nudity scene where Marston accidentally walks in on one of the mission givers and a random woman. The violence, blood and gore are a little on the extreme side, with the ability to go on the classic Rockstar rampage including killing and skinning animals. Blood spray is very visible under the desert sun. Puddles of blood form under corpses and bloody footprints are also visible. The bodies also remain visible for long periods including after you have skinned animals. Racism is mostly of stereotypical Caucasian Americans who believe that the Native Americans and Mexicans are savages, but the game doesn’t portray Native Americans or the Mexicans as such. Many of the mini games portray gambling, from playing horseshoes to poker, one of the suits in the game allows you to cheat at the latter. The language leaves a lot to be desired, but it is an improvement compared to other Rockstar game; most of the more “civilised” characters don’t drop f-bombs at all but there are still multiple characters that can’t go more than 5 words without uttering a swearword; but nearly all the characters use the Lord’s name in vain.

Rockstar veterans like me will find that RDR is very close to Grand Theft Auto but I feel that they have changed and added enough content to make RDR feel fresh. One of the main issues I have with the gameplay is the horses, especially if they keep running after you have called it.

All in all, Red Dead Redemption is a good game besides its darker sides. The game sucks you in and you might find that hours have gone by to what felt like minutes. John Marston is definitely one of the most likable protagonists created by Rockstar and the story has one or two heart wrenching twists, but gamers concerned about content in search of their next purchase may want to look elsewhere.