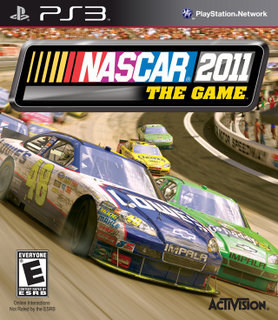 After years of underwhelming results, the Nascar license has been taken out of the hands of EA, and put into the hands of Eutechnyx and Activision with Nascar The Game 2011. Nascar gamers were excited about this breath of fresh air, and the many big promises made by Eutechnyx. So, has the game left its predecessors in the dust, or did it crash and burn? Buckle up and let's find out.

Nascar The Game 2011 has a lot going for it, but also has problems that show the infancy of this soon to be annual franchise. Customization, graphics, sound, and controls are all fantastic, but there are some issues that put the brakes on this title from being a total success.

The game’s main game play revolves around the career mode. Here you are able to get behind the wheel as your favorite driver for the entire 36-race season. Career mode will take you from the Daytona 500 all the way through the Chase for the Sprint Cup. The game originally only offered the 2010 season, but updates have added the option of playing though the 2011 season as well, now with updated tracks and paint schemes. This download did not update everything about the new season. Minor issues such as the point system are still under the 2010 structure.

Where this title really shines is in its customization. Race after race you have tons of options such as: race length, turning caution flags on or off, adding in tire wear, qualifying, and using the default car setup or making it completely your own. These options help you make the experience exactly what you want it to be. If you want the game to be as lifelike as possible you can race every single lap of every single race, or for the arcade feel, you can tailor it down to just 2% of the laps the Sprint Cup drivers do week in and week out. Choosing to qualify can put you right in the front of the pack, or opting out will put you dead last, where you can claw your way up to the lead for the win. Pit stops are optional as well, and add yet another level of realism to the game. Not only can you decide if your crew changes the tires and adds Sunoco race fuel, but you can make track bar, wedge, and grill tape adjustments too. If you are looking for the fast paced arcade game play, or for the more realistic experience, there are options to help make that possible.

The other game modes offered in this title are helpful to give you a break from classic career mode, but do not stand alone very long on their own.

To change things up in your single player experience, you can play Eliminator. In an Eliminator match you start at the back of the pack and have to inch your way forward to survive. After one full lap is complete, whomever is in last place will be eliminated every 10 seconds. The trick to these races is to drive as cleanly as possible because any slip up may cost you the race, but if you make it to the end, it can be very rewarding.

For multiplayer the game offers both split screen and online. Online multiplayer can be fun, as long as you do not take it too seriously. Just like in the single player modes, you can simply jump right into a race or set it up to your liking. Join in a public quick race, or send out invites to your friends for a private race. In public races, most multiplayer rounds will be straight up racing, but occasionally you will run into the player who likes to drive backwards, smash his car into anything (and everything), and quit in the middle of a race. These players can put a damper on the game, but thankfully, they are few and far between. 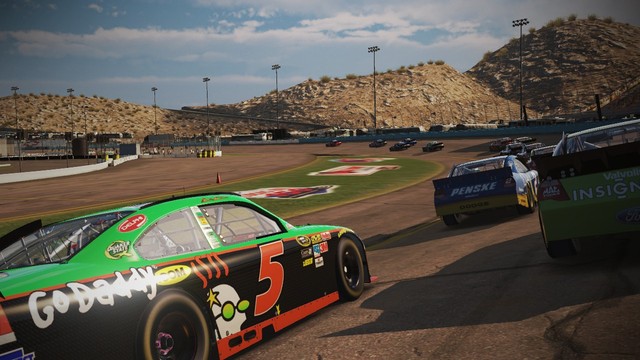 Before going further, I must say that any Nascar game will have a near impossible task in balancing fun and realism. If the game is too realistic, it will often be far too frustrating, since the average driver wins one race per season and almost never recovers for a great finish after scraping the wall. On the flip side, games that focus too much on pure fun will become more of a “kart” style and lose what it is to be a Nascar game. So did Eutechnyx find that near impossible balance with Nascar The Game 2011? They did in many ways, but not quite all. The fact that a player can have a run in with the car next to him, but still recover, helps keep the game play fun and engaging. At the same time, the player has to have a bit more strategy than just holding down the gas button which keeps things strategic.

Some worthwhile additions to the game play include the rewind feature, NXP, and gaining sponsors through achievements.  The rewind feature will allow you to redo the past few seconds, in case things did not go as planned. You will only get a limited number of rewinds per race, so you have to use them wisely. These come in handy, especially when you play a 50% or even 100% length race, and have that one little error with only a few laps to go. While you cannot use this in multiplayer, it can be a lifesaver in your career mode. NXP stands for Nascar experience points. You will earn NXP for things as simple as drafting, and as silly as donuts after a win. The higher your NXP is, the higher your driver ranking will be. It doesn’t earn you any more points for the championship, but it can still be a reason to brag. Sponsors will help you care about aspects of the game you may have not paid attention to otherwise. Each sponsor wants something different from you, and you will have to keep an eye on these expectations, if you are a 100% completion type gamer. To get all of your sponsors, you will need to not only win races, but also shoot for the fastest lap time and qualify on the pole.

Controlling your car can feel quite natural once you get accustomed to the amount of gas and brake a particular track will need. This game will take a fine touch, especially at short tracks and road courses. The standard PS3 controller lets you finesse your way around the track. You are able to lightly let off the gas on the corners, and go full throttle when you get to those straightaways. For the diehard racing fans, the game also supports the use of a wheel controller. Using the wheel, and the cockpit view, can put you right into the racing experience, but many gamers have complained of not having the same finesse capabilities as with the standard controller. 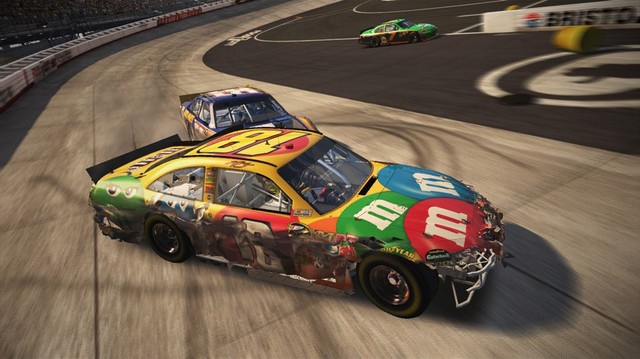 Both the graphics and the sound in Nascar The Game 2011 are spot on. Time after time the game looks as realistic as a game possibly can. While minor issues, such as the crowd, may not be true to life, the cars are near perfect. Not only does it look good, but it also looks fast. A huge challenge in a Nascar game is to give the gamer the experience of driving the length of a football field every second. Great graphics and exhilarating speeds; what more could you ask for?

During a race, the audio compliments the surroundings. The rock music blaring during most racing games is kept out of the race, and left to the menu screens. During the race you will hear the car, and more importantly, your spotter. The spotter may repeat some phrases over and over, but can also be a great asset when he lets you know about the guy right on your bumper. The game does have announcers, but wisely they have been put in to the pre-race video and not the race itself. Altogether, the graphics and sound keep this game as true to the Nascar experience as I have seen in any Nascar game.

The areas where the game misses the mark are small, but can really frustrate you from time to time. Each race you are given a rival. Unlike actual rivals in Nascar, you will have a different rival each race, instead of one for the entire season. This rival will be extra aggressive to you throughout the race. You get extra NXP for beating the rival, but at times this aspect of game play gets annoying. There have been several times I was racing for the win, with a driver right on my bumper, when my spotter decided to tell me how my rival is doing in the back of the pack. Next, load times are a bit longer than I would like, but to help make up for it, they have put Nascar trivia in to help distract you. Those issues are minor, but one that can ruin the race you are in is a mistaken pit road violation. If you are in a wreck and have caution flags turned off, or the caution doesn’t fly soon enough, you will get black flagged if you are bumped into pit road. The game thinks you entered pit road illegally, and in a situation like this, you cannot use your rewind button. You can go from first place to down a lap in a matter of moments when this happens.  It does not happen a lot, but when it does, you may want to throw your controller at the TV.

This game ranks very high on a moral grading scale. In several ways this game is more wholesome than an actual Nascar race. You will never see the racers fight, no driver gets hurts from a wreck, and most importantly, all alcohol sponsors have been taken out. Keeping the alcohol logos off of the cars may upset you if you are a Matt Kenseth fan, but it is a smart move in my opinion. You will see your driver spray champagne everywhere after a win, but he does not drink it, and no brand name is on the bottle. Online interaction is not 100% safe since bluetooth and custom paint schemes are allowed. Single player will be a family friendly experience with the exception of the seldom use of the “d” word.

In the end, there is so much going for this title that I would strongly recommend it for any Nascar fan. It truly is amazing how detailed certain aspects of this game are. You will have moments of frustration, but seeing your favorite driver win the Sprint Cup will make it well worth it in the end. There are details that still need to be worked out, but I believe we can expect great things from Eutechnyx in the future. If Nascar is in your blood, go pick up a copy, and as Darrell Walltrip would say “boogity boogity boogity, let’s go racin’ boys!”