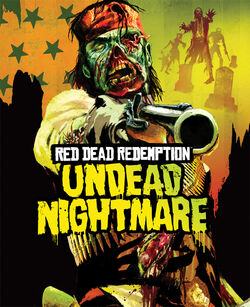 John Marston has returned to fight a horde of zombies and discover the cause of the dead rising from the grave. Undead Nightmare was originally released as DLC for the original Red Dead Redemption but was soon released as a standalone game at retail. The events of Undead Nightmare take place near the end of the story of the original Red Dead Redemption. While Marston is spending an evening with his family, Uncle (who has turned into a zombie) returns home and attacks Abigail and Jack. After Marston 'kills' Uncle, he finds that Abigail and Jack have become zombies after being bitten by Uncle. Having restrained his family, Marston now sets out to find a cure for his family and the cause for the undead. This leads Marston into reuniting with characters from the original game, both alive and undead.

Unlike the zombies in recent titles such as Left 4 Dead, the zombies of Undead Nightmare are really the dead raised from the grave, though the common theme of being bitten by one turning you into a zombie is still in the story. The zombies are also more difficult to 'kill' compared to games like Left 4 Dead; they will shrug off and absorb shots from most firearms if you hit them in the body, but headshots are one of the sure fire ways to kill one. Fire and explosions are the other ways to stop them. Since most of the original weapons are essentially rendered weak against zombies, new weapons have been added, most noticeably the blunderbuss, which uses undead parts for ammo and fires an explosive shot, and Holy Water, which is used like Molotov cocktails and will engulf any undead with blue fire.

The game sometimes feels like it is borrowing from the Left 4 Dead series with 3 types of special zombies; firstly, bruisers (akin to L4D2's charger) who charge at you at high speeds; bolters (akin to L4D2's jockey and hunter) who chase after you and will maul you if you are rendered immobile and finally retchers (akin to L4D2's spitter and boomer) who spit toxic missiles at you and will explode when killed. Though they are special compared to the normal zombies based on their tactics, they are just as easy to kill. The zombies can mostly be outrun but their blows easily break Marston's stride. Their tactics are easy to figure out; they'll mostly try to distract you while you are slowly absorbed by an army of the undead.

Weak Points: Horses are as annoying as ever; much of the original game has been removed; story missions have no guidance.

Lots of content from the original game is removed, such as the honor and fame system, all mini games and all merchants. Ammo is very sparse and difficult to find and you could find yourself trying to fight of the horde with a torch. Some of the new activities include saving and protecting towns from zombie attacks and clearing out graveyards, but they can get quite tiresome. A lot of the sound effects were reused from the original RDR, but that is to be expected as Undead Nightmare is just a expansion over the original. I find these zombies more realistic and indimitating compared to other zombie games due to their sound effects. The background music has been remixed to give it a spooky feeling which adds a lot more atmosphere to the game and it's "horror in the Wild West" backdrop.

Story missions don't have as much drive or guidance compared to the original game, reducing it to mere "If you happen to find some". I found myself countless times just running around a spooky landscape with no idea what to do. You can be forgiven for thinking that the game is basically about killing zombies and that the story is just an afterthought.

To fit the supernatural setting, Rockstar has added creatures such as Bigfoot, the chupacabra, the unicorn and the four horses of the apocalypse to the game as wildlife. The unicorn and the apocalypse horses can be ridden as normal mounts and the apocalypse horses have special abilities, such as War, a fiery horse that will set any undead that collides with it ablaze. Speaking of the apocalypse, Revelation talks about the four horsemen, so to see them portrayed as fictional creatures like unicorns is slightly sacrilegious.At times, you might find your normal horse has turned undead but they are not hostile; if your horse is undead, it will have unlimited stamina (a trait shared with the mythical horses) but it will turn left or right while moving. The gore level has increased from the original: from zombies' heads blowing up from a headshot, blowing up completely by being shot by the blunderbuss to using body parts from the zombies to make ammo for the above mentioned weapon. Even though the zombies are 'dead', bloodsprays are still seen if they get shot. Even the animals have become undead and are more aggressive than their living counterparts. Though 'living' prostitutes have been removed, they are still visible as undead. Minor racism is still around with the average NPC's guess as to what is going on, some claiming that the Mexicans caused the undead. The zombies are raised by a supernatural curse and some of the NPCs say either that God has forsaken them or that they will survive because of faith. A new animal added is goats along with a very rare variant with larger than average horns that are a supposed satanic reference. From a Christian perspective, we know that zombies are completely fictional and we will never have to actually battle the undead - they are just like ogres or orcs represented in many fictional works. The Bible does mention Christ raising his followers' bodies from the ground, but it will not be the zombie apocalypse that the media has been portraying lately (it will be much more glorious!)  The gore is equal to other zombie games, so if it bothered you before, you'll want to avoid this one, too. Definitely for mature gamers only. I feel that the story portrays greed as a negative aspect, as it is through one man's greed and craving for power that the undead start to rise and that it was his greed that ultimately kills him in the end.