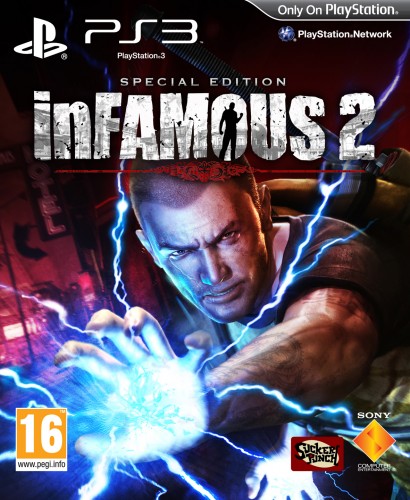 "Morality, conscience and freedom of choice are central to this game," so read the head of the press release that announced Infamous 2. A game that gives moral choices would be well suited for a review on a Christian review site.

The main character, Cole, is a super hero or an antihero with special electric powers. He can buzz someone to death or zap them back to health, depending on your choice. Cole's disposition (or morality) depends on how you play Infamous 2. Your purpose is to gain strength to finally defeat the great beast that is advancing towards your town of New Marais. You can choose the missions of secret agent Kuo (good order and justice) or rebel Nix (chaos and destruction). If you choose one, the other mission expires. The choices are: "We take down as much lives as possible" according to Nix, Whereas, Kuo says "You cannot do this, man." 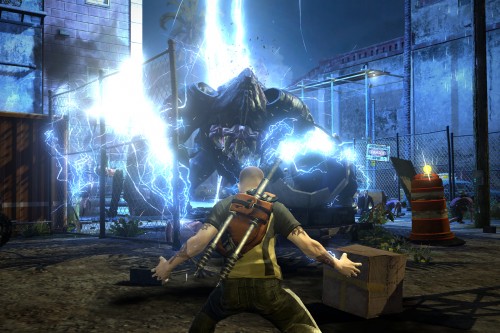 Strong Points: Multiple endings depending on the choices you make in the game.
Weak Points: The challenges are a nice addition but they seem under developed.
Moral Warnings:You can choose to be good or evil in this game.

Along with fighting your conscience, you struggle against the local ruler Bertrand and his tough militiamen and monsters. The game often gives you a choice between good and evil. You can tie wounded militiamen with electricity or suck extra energy from their life to become stronger and kill them (doing this shows you their skeleton lighting up). When stopping a hostage, you can do it cleanly and only shoot and tie the militiamen, or you can also just shoot around and also kill other people in your reach. Both actions will affect your karma to a good or a bad side. Karma is a real-life religious concept, in religions like Buddhism & Hinduism, but is only used here in the game as a reference to Cole's sway towards good or evil. Karma allows you unlock additional powers such as group healing if you choose to do things nicely. It is therefore useful to continue on your good or bad way. What would you decide to do if you needed energy to survive and a wounded militia soldier lies ahead of you?

If you die in the game, most of the time, you can restart just before the last challenge. While you can wander around all you want in New Marais, you can play a lot of side-missions and build your own side missions or gather side missions from others. The game is mainly about the excitement, whether you win or lose the shooting obstacles. There are some other challenges, like sliding over electric wires and connecting two power stations by shooting an arrow with a wire attached. These are simple challenges, not totally developed.

You can expect around thirty hours of game play in Infamous 2.  It all depends on on many side-missions you accept.  The side-missions make the city safer, while the lead missions guide you through the story.  If get stuck in the mission you can restart the mission again and choose the other mission. If you choose a good karma-mission and end it, the story continues in the same way as the story continues after ending the bad karmamission. For example, one mission asks you to release prisoners from a camp. You can choose to drive over there with a train filled with explosives and kill as many as you can, or you sneak in and try to free them with minimal casualties.  Depending on your choices, you'll see one of two endings when you beat the game. 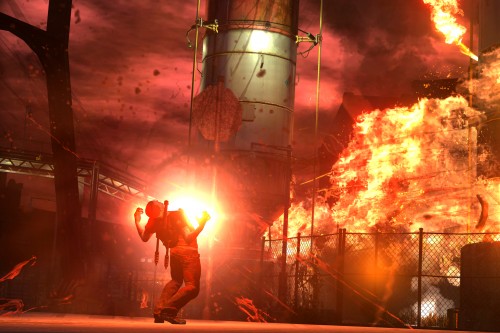 For the most part, the controls for maneuvering Cole are very good. Sometimes I struggled with the camera view. though. Climbing and grinding make a huge difference in the fighting scenes. Veterans of the Infamous series may notice that Cole has a different actor this time around.  All the voice acting is well done.  The background music is nothing special, but it's not annoying either. The city background noises and sound effects add to the feel of the game. The graphics are also top notch. New Marais really has noticeably different parts of the city including rich and poor areas. The poor areas are where you have to bring electricity, while the rich areas have the big buildings for climbing and grinding.  The cut scenes are well made, perfectly timed, and  not long and drawn out.

What adds the potential moral problems of Infamous 2? The Teen rating is there for a reason, it's not a game for children. The images are not very shocking, but there is some verbal abuse. The moral choices available vary in how much force you use without compromising your progress in the game. It's nice that you can play this exciting game in your own way. While you are not forced into unnecessary violence, I myself am not a fan of games where you (with extra powers) play the great destroyer. The good, righteous superhero is more fun to play in my opinion. In the end, Sony and Sucker Punch Productions presents a life lesson of how your choices in the use of force will develop your character. This game delivers parents a good conversation starter with their teenagers about the use of violence; How do you use your extra powers/talents? Do you use it in the military way to support a society or in the destructive way? And it shows how small choices have influence on your personal development. This game provides a good opportunity for Christians to discuss Karma and how it relates to their faith and the world.