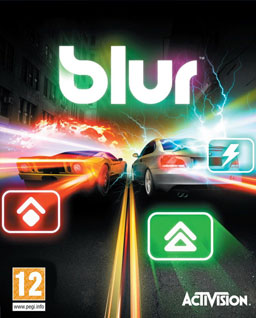 While some titles like Gran Turismo focus on a real life driving experience, Blur does the opposite, offering a chaotic and somewhat ridiculous driving game. But that's what makes it fun. As stated above, Bizarre Creations didn’t make this game to challenge Shift or Gran Turismo; instead they've made something completely different, and how many people can say that they have seen a 1950’s Ford pickup truck in a racing game? (Let alone one that can go 100 miles an hour.) Cars range from Dodge Vipers and Hummers to vans and Volkswagen Beetles, but don’t let them fool you, because in Blur they can go just as fast as sport cars.

Unfortunately, in the effort to make Blur stand out in the genre, driving physics are not as great as they could be, making the car feel very unresponsive while cornering. I’ve even seen most (if not all) players, including the most experienced ones, slam into the outer wall on most turns. While I’m disappointed about the “normal” driving, the physics of the vehicular combat are good. Although Blur might be a little bit over the edge, physics of the vehicular combat feel closer to the real world than some of the more realistic games. Obviously a small car like the Lotus will not be able to make a monster like the Hummer H2 move in real life and it’s the same thing in Blur with little cars getting body slammed by SUVs.

Power-ups and mods are two of the biggest features in the game. There is a wide array of power-ups, ranging from ball shaped homing missiles to the ability to send out a shock wave to push other cars out of your way. It’s no secret; the power-ups and mods are what make Blur fun and adds to the chaos. Mods can be used to make your car more resistant to damage, gain more fans or to make your power-ups more powerful. You always have to be aware of your surroundings in order to avoid incoming attacks as being hit by a hostile power-up can slow you down considerably. 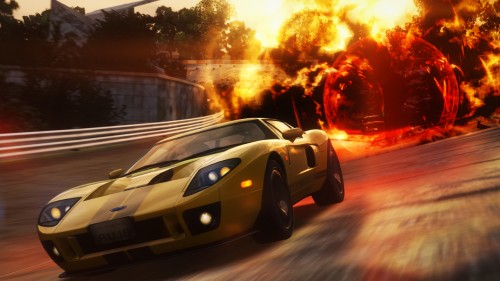 The career mode is pretty simple; you’ll race through several bosses in one-on-one races until you become king of Blur. But, before you can get to them, you must meet their challenges. Besides challenges, lights and fans are the means of progression through both career and multiplayer. Lights are very straight forward and act as racing points; if you are first in a race, you will score five lights and two bonus lights for achieving the fan goal or performing a fan run. Even though they have a large role to play in career, lights are non-existent in multiplayer. As with most games nowadays, Blur works on experience levels which in turn unlock faster cars and more mods which make the game more enjoyable for me. Fans are the experience points and you’ll get fans for skilful driving and use of power-ups.

Graphics are pretty standard for current generation racing games. In my opinion, the game is very flashy and colorful which seems to make “lights” a good name for racing points. Damage does appear on the cars and sometimes, smoke will start to come from the engine or sparks will shoot from the sides of the car. A disappointing aspect is the lack of visual customization options on the cars; only about half of the cars can be sprayed a different color and you can’t fit new parts such as a spoiler.

In my eyes (or ears), the sound is not all that good. Background music is just played in the menus and before the start of the race. While the music fits the Blur atmosphere, it is just generic music. While you are racing, the only sounds are that of the engines and impacts from attacks. Just relying on the sound of the engines makes it feel a bit boring. Power-up attacks have some sort of space laser feel to their sound effects; though the mines and barges (a shock wave) have very good sound effects. 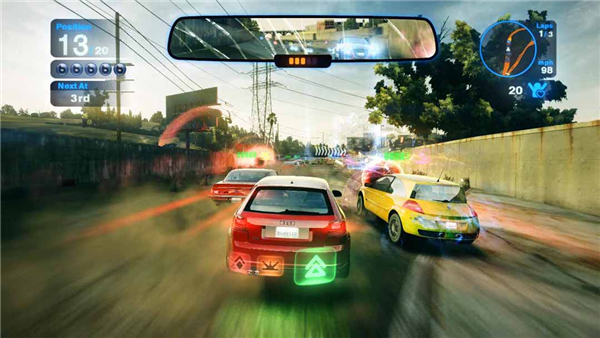 Unlike other racing games, you don’t buy any of the cars. I like to compare the car selection of Blur to the character selection of fighting games; basically, you pick which car from the ones that you have previously unlocked. I’m rather happy with this, especially with the lack of customization.

Maps are quite varied ranging from city streets to rural dirt tracks and each track favors a different car type. Obviously, the SUVs are going to be slow and clumsy compared to smaller cars on city streets; but the smaller cars are at a disadvantage on the dirt tracks. I have seen that the small cars lose a little bit of their speed and handling points when they hit off-road terrain but the SUVs just plow on without any trouble. After playing the game for a while, I became familiar with the maps which made choosing a car easier because I knew what to expect.

Multiplayer is almost addicting; you’ll begin at level 1 and gain levels as you compete in races and gain fans, unlocking more cars and mods along the way. There are different race modes to select from, but most of them are pretty much deserted and empty, with most of the players playing either ten man or twenty man races. The online experience is a lot more competitive than single player as the players are a whole lot more aggressive than the CPU. Lag exists at times but it’s not game breaking as most of it happens when the race starts and the other cars jump around you. Sometimes, you’ll see lag with power-up hits, especially with shunts (the homing missiles) as they sometimes disappear before hitting an opponent, giving the illusion that the player has destroyed it before the hit. But about 2 seconds later, the car will react to the impact from the power-up. The most game breaking experience I had was all the cars besides mine got stuck in mid-air and I had to leave the session to rectify this glitch; but this has only happened in multiplayer once in 5 hours of total online race time.

The game is, generally, quite age friendly. I think the only reason it has such a “high” age-rating is because of the power-ups and difficulty. The only people you’ll see are the drivers who all wear long-sleeved shirts. You can see photos of the bosses as well, each wearing clothes fitting to their style but it’s all pretty much clothes that can be worn every day, but some of the girl bosses do wear some revealing clothing, such as tank tops. The only spoken dialogue is by a woman who coaches you through the game. People are never hurt, but I can’t say the same about the cars. The most graphic scenes in Blur are just burning wrecks of the cars that got destroyed but they disappear after a few seconds.

My verdict: Blur is a really fun game. It has become my favorite racing game. Even though I am disappointed with some features such as not being able to customize the look of your cars, it makes up for all of it with its difference to other racers. Some people have called it Mario Kart with cars and I’m inclined to agree; but Bizarre Creations was able to tone down the cartoonish and made the game more “serious.” For players looking for a driving simulator such as as Gran Turismo, I advise you to look elsewhere.