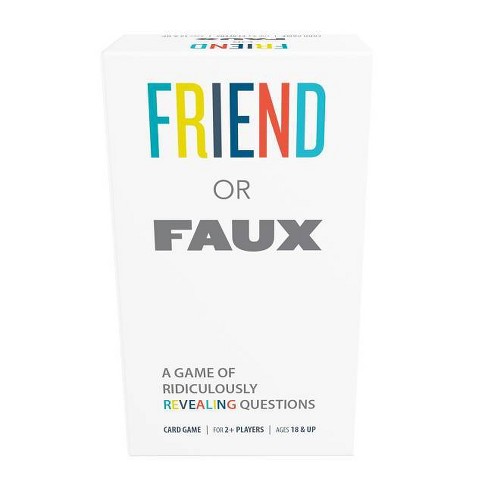 Thank you Goliath Games for sending us a review copy!

Friend or Faux was successfully Kickstarted in 2017 and surpassed their goal of $25,000. This game features five levels of increasingly personal questions that the players get to guess the answers on to see how well they know one another. Because of the sexual questions asked in levels four and five, this game is recommend for players eighteen and older. Alternatively, you can safely play this game with anyone using the levels one-three decks. At least two players are needed, but like many games, the more players you have, the more fun the game will be. Depending on the number of players, you can expect a game to last between thirty and ninety minutes. 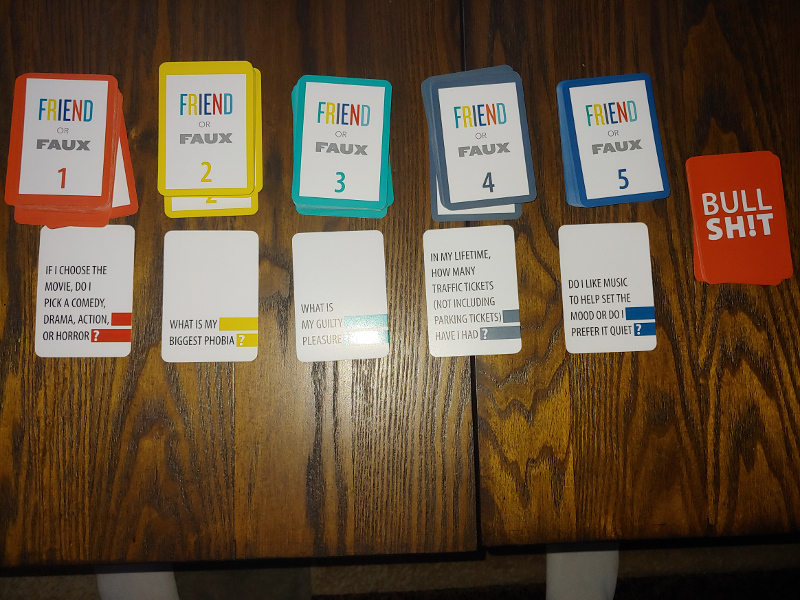 Strong Points: 250 question cards
Weak Points: May be hard to find people willing to answer questions about their sex lives
Moral Warnings: Many of the questions are inappropriate and talk about sex or drugs

To play the game you need to split cards up into their color-coded numbered piles. The first player picks the top card from the level one deck and reads it aloud and pauses for the rest of the players to guess the answer. They then reveal the answer and players who got it right earn a point. If anyone objects, they can put down their Bullsh!t card (which has unlimited uses) and explain their reasoning as to why they are right. If the other player concedes, they will get their point. After every player does the first level of questions, the process begins again with level two, and so on. After the final level, the points are tallied up and the player with the most points wins. 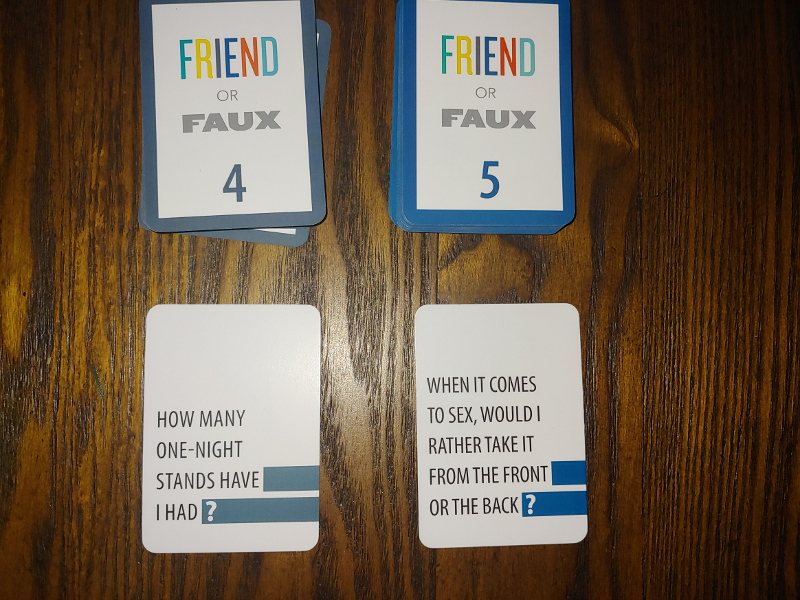 The first level of questions are pretty tame like “When I was a kid, what did I say I wanted to be when I grew up?” The questions in the second category get a little more interesting with this one as an example: “How would I react if I discovered the house I wanted to move into had been the scene of a murder? Level three is as far as I’m willing to play this game with anyone as I don’t mind answering questions like “Am I a rule breaker, rule maker, or rule follower?” The cards in level four will ask many drug and sex related questions with an example being “Where is the craziest place I have had sex?” If that’s not personal enough you can continue on to the fifth round and answer a question like “If I could have a one-night fling with someone other than my partner and never get caught, would I do it?”

By playing Friend or Faux, you can learn a lot about your friends and family.  The question is, do you really want to learn that much?  With the Bullsh!t cards, it’s hard to avoid crude language. Given the cursing (including f-bombs), sexual and drug related questions, this game not a good match for conservative Christians.  Playing levels 1-3 could be fun with people of all ages, but there’s no way I’m going to play levels 4 and 5 with strangers or people I see on a daily basis!