Thank you Bible Games Central for sending us a review copy of this game!

My teenagers constantly reference memes and use emojis in their text conversations. Out of all of the games sent to us by Bible Games Central, Emoji Bible Stories was their first pick to play together. At first, it was my son, daughter, and I playing and then my husband went from a talkative bystander to an active player during the next round. We all had and enjoyed our time together guessing various Bible verses with the emojis shown to us.

Strong Points: Four different ways to play
Weak Points: It took us longer than fifteen minutes to finish a game
Moral Warnings: None!

All of the components are colorful, easy to read, and of high quality. The foldable instruction booklet explains how to play the four different modes:

Tell an Emoji Bible Study –The green story cards and emoji cards are used in this mode with players having two story cards and four emoji cards in their hand. On a player's turn they can draw two story or emoji cards, or one of each. Your goal is to tell a Bible story using three emoji cards. If the players think you did a good enough job, you’ll earn one point. The first player to three points, wins.

Guess the Bible Story – This is the competitive mode that my family played. We each had six emoji cards in our hand at all times and one green story card we were trying to convey to the others. The orange cards are used for reference as needed. On a player's turn, they can attempt to guess another player’s story and exchange their story and emoji cards as desired. When a story is correctly guessed, both parties earn one point. The first player to five points, wins.

Match and Guess – Each player gets one purple story card that they keep to themselves. On their turn a player draws an emoji card and if it’s on their story card they place it face up by them. If not, the emoji card gets discarded if it’s not claimed by another player in need. Both players get a point when a story is correctly guessed and the first player to five points, wins. 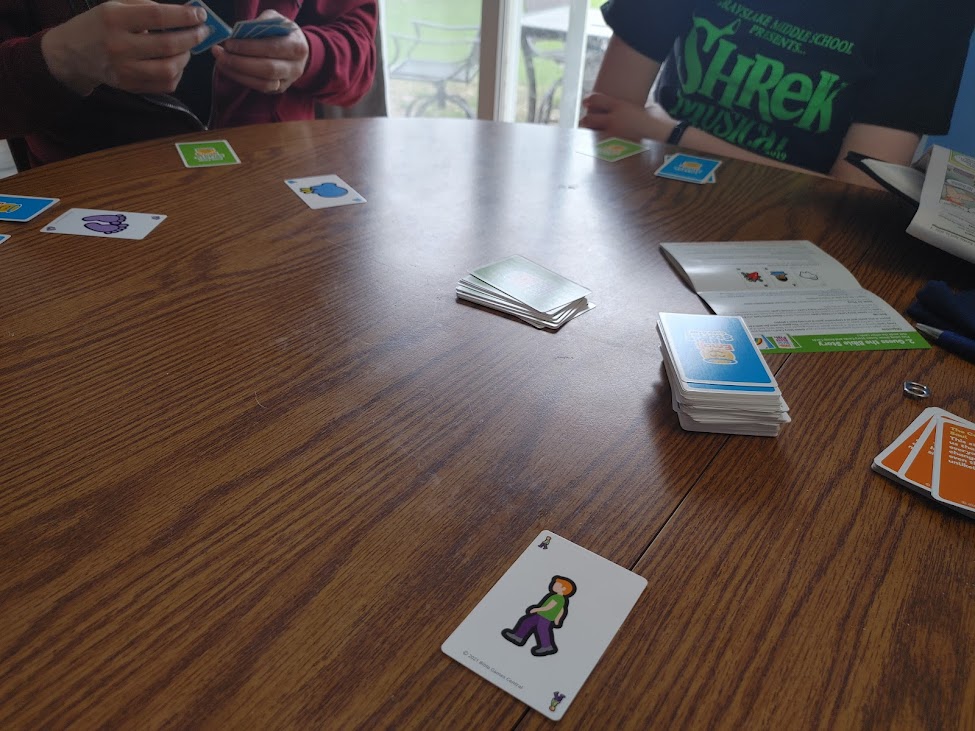 I like how the orange story cards provide a quick overview and shows the Bible references and suggested emojis. Our family tended to deviate a bit from the recommendations but still managed to convey our stories successfully. Some of the emoji cards are specific to a particular story and may be found useless in most scenarios or as an instant giveaway for veterans of this game. For example, the 7 and horn emoji cards only apply to the battle of Jericho (Joshua 5:13-6:20).

Overall, Emoji Bible Stories is a versatile and fun Biblical card game that can be enjoyed by people of all ages. With so many different ways to play, it can actively engage younger players and teach them Biblical stories in the process.