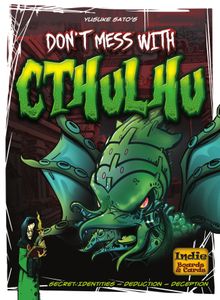 Don’t Mess With Cthulhu is a social deduction game by Yusuke Sato that is sure to be a hit with a lot of groups. Social deduction has become a major board gaming genre in the last decade and for good reason. People love playing Sherlock as they try and figure out the bad guys, or playing the evil mastermind as they sow chaos and confusion through the slowly dying village populace. Both sides of this dynamic are interesting but they are not without a flaw – some players just can’t follow the web of lies and deception and thus can’t get into the game. It is here that Cthulhu steps in to save the evening.

The first thing that sets Don’t Mess With Cthulhu apart is that it tells players nothing about their allegiances at the start. The good Investigators are looking for Elder Signs, and don’t know their allies as usual. The evil Cultists are trying to summon Cthulhu, and also don’t know who their allies are. All players are equally oblivious at the start of the game, and nobody feels like they’re missing anything. Games only take 10 minutes, rather than the typical 30-45 minutes, and this short cycle is very conducive to teaching new players.

The second major deviation is that players are each given a hand of five cards, drawn from a deck made up of a small number of Elder Sign cards, a single Cthulhu card, and a large number of blanks. Everyone is searching for their respective symbols from these cards, rather than trying to guess everyone’s role per se. Players make a claim to the contents of their hand, indicating any number of Elder Signs, and whether they have the lone Cthulhu card. The key here is that anybody and everybody is allowed to lie or speak truthfully, no matter which team they are on. Once everyone has made a claim, players start flipping over cards. The good Investigators are looking for Elder Signs to stop the summoning of Cthulhu, while the Cultists are looking for the Cthulhu card or to keep the Elder Signs hidden. After a number of cards are revealed, all unrevealed cards are collected, shuffled, and dealt out again, and players repeat this cycle of claiming what’s in hand and flipping cards. 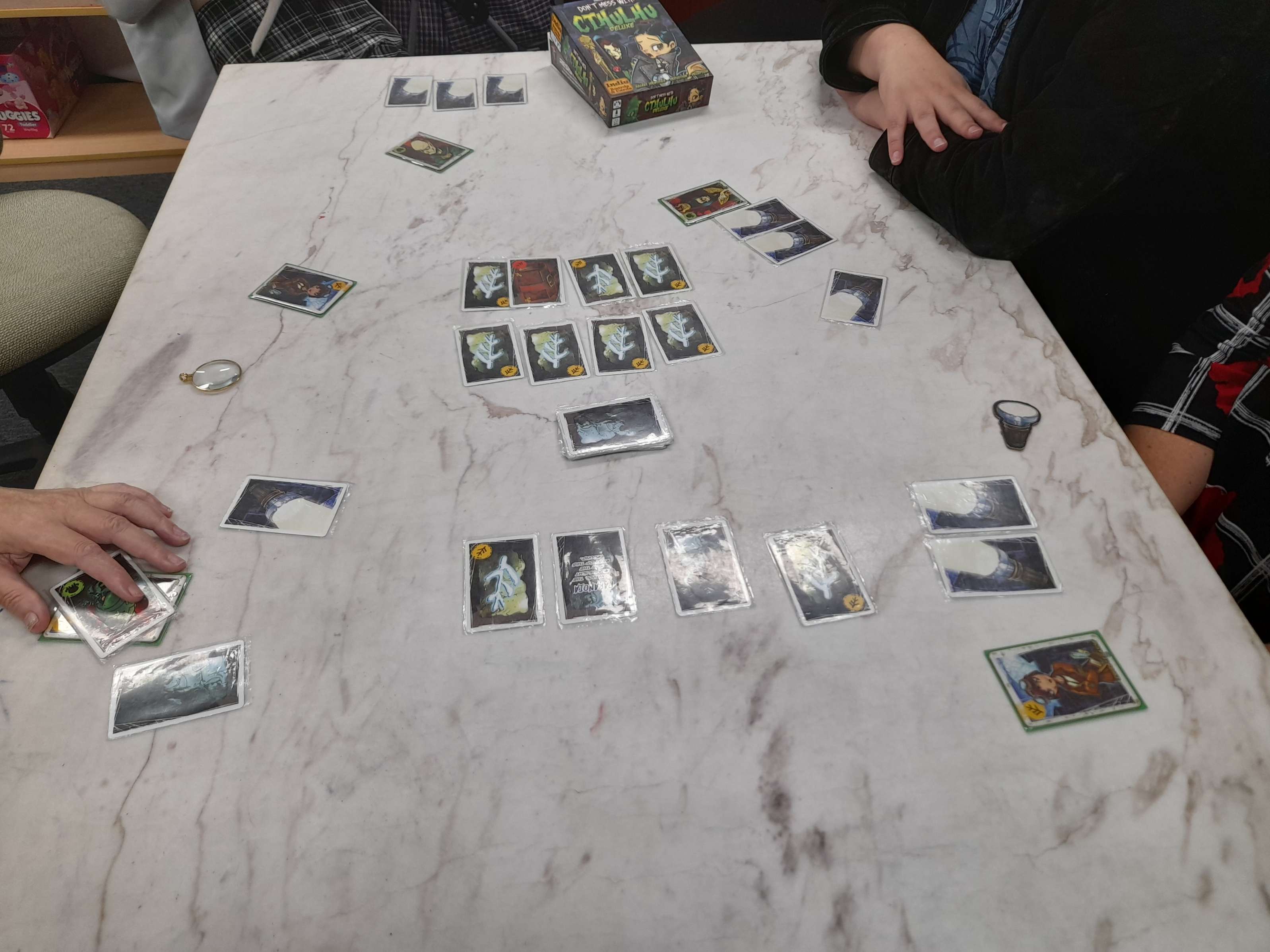 This periodic reshuffling creates a predictable structure to the deception, and also turns every player into a de facto Mafioso. Sometimes you have a whopping three Elder Signs in hand – but also the deadly Cthulhu, forcing you to claim zero Signs to hide the Cthulhu card from the Cultists. It also turns every player into a de facto Detective. By cross-referencing claims with your hand and across rounds, most players can make a reasonable judgement of player allegiances. Another interesting consequence is that exposed Cultists can still play the deception game, and framed Investigators can still help their team.

The net result of these mechanics, I’ve discovered, is that many more players are somehow able to follow the game. On the surface, players have less direct information on player roles, so it seems like unattuned players should struggle more. My board gaming group has a regular flow of new faces that just can’t keep track of the web of lies and feints in other social deductions, whether it be Secret Hitler or Avalon or One Night Ultimate Werewolf. And yet when Don’t Mess With Cthulhu comes out, I have never seen these players struggle to follow the action. After the first learning game, everything is clear to these players, everything makes sense, and they become highly adept bluffers and liars from the second game onwards. There is something magical happening in this game that allows these players to keep up, something that can’t just be attributed to the game’s mechanical simplicity. I don’t know what this secret sauce is, but I’m very appreciative of it, as it allows everyone to join in.

The game can be played with just three players, but it does feel dull and unexciting at such a low player count. With a second copy of the game, up to twelve players or more can play in theory (per the Kickstarter version of rules), but the ability to reveal all cards from several players in the first round warps some of the game’s dynamics. If you go above eight players, I suggest a house rule to prevent revealing all of a player’s cards in the first round. 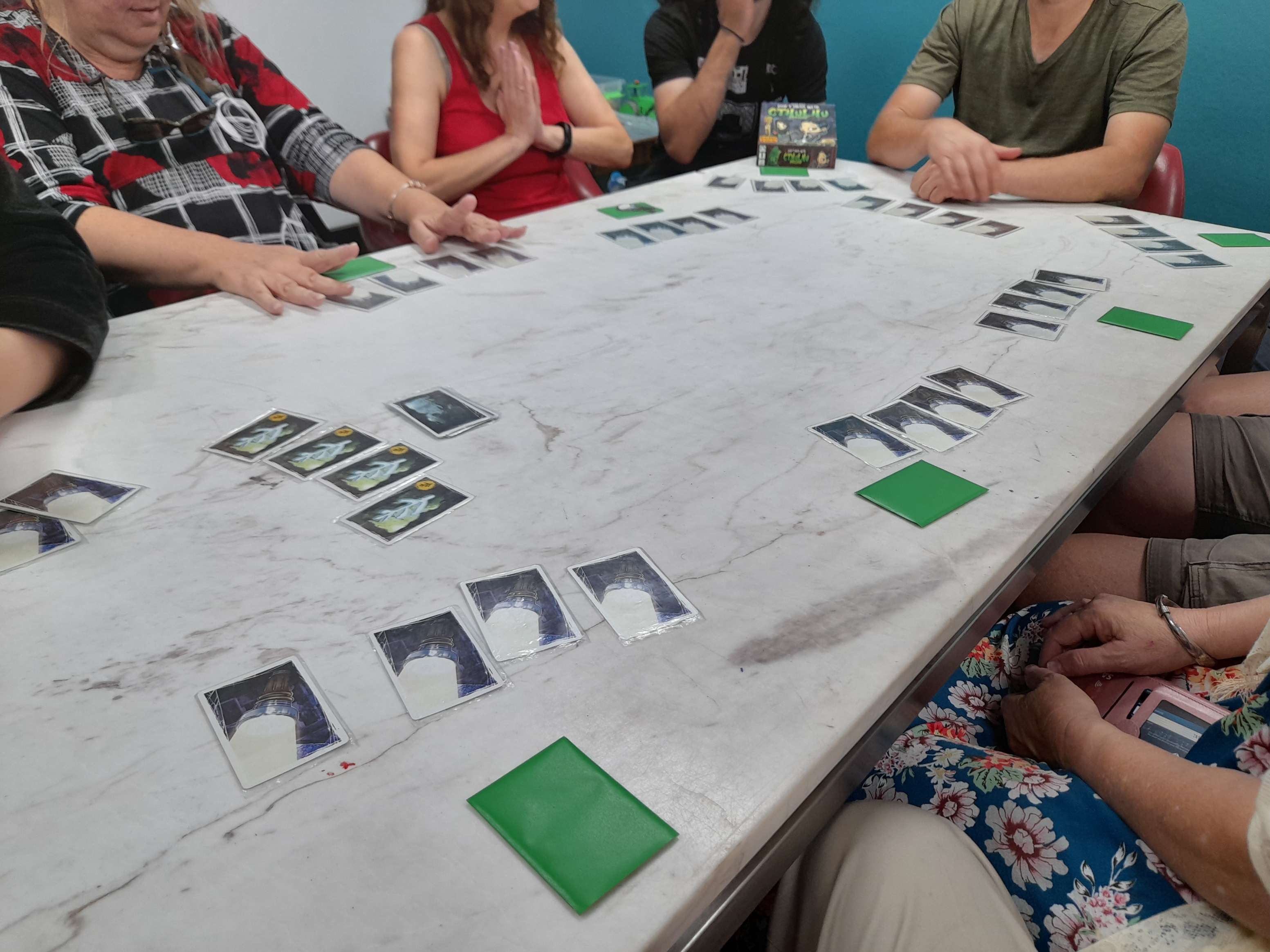 The Deluxe edition seems to have replaced the original version in most stores. I highly recommend getting this version, as it comes with extra roles to play up to eight players, and the Necronomicon and Words of Power expansions that were originally Kickstarter exclusives. The Necronomicon cards are a Schrodinger’s Cat of sorts, acting like a Cthulhu card until an Elder Sign is flipped over. The Words of Power replace some blank cards and spice up the game. The cards from both expansions are never claimed directly - your claims are still restricted to how many Elder Signs and whether you have the Cthulhu card. However, they also add a significant wrinkle to the game dynamics in the same way the lone Cthulhu card does. The expansions barely increase the complexity, but add a lot of extra depth to the deception.

On the moral side of things, the primary concern is its supernatural themes. The game’s thematic draws inspiration from H.P. Lovecraft’s Cthulhu mythos, although this is technically cosmic horror (alien monsters) rather than supernaturalism proper. There’s also a smaller concern in that the game encourages deception and bluffing, but this really shouldn’t be a problem since most kids should be able to understand that games are not reality.

Overall, Don’t Mess With Cthulhu is a simple but deceptively deep social deduction game that is sure to please many players. It might not have the intense long-term deception of its heavier-weighted cousins, but more than makes up for it by being extremely accessible. If you have players that just can’t click with the deception, Cthulhu is a perfect game for these players.