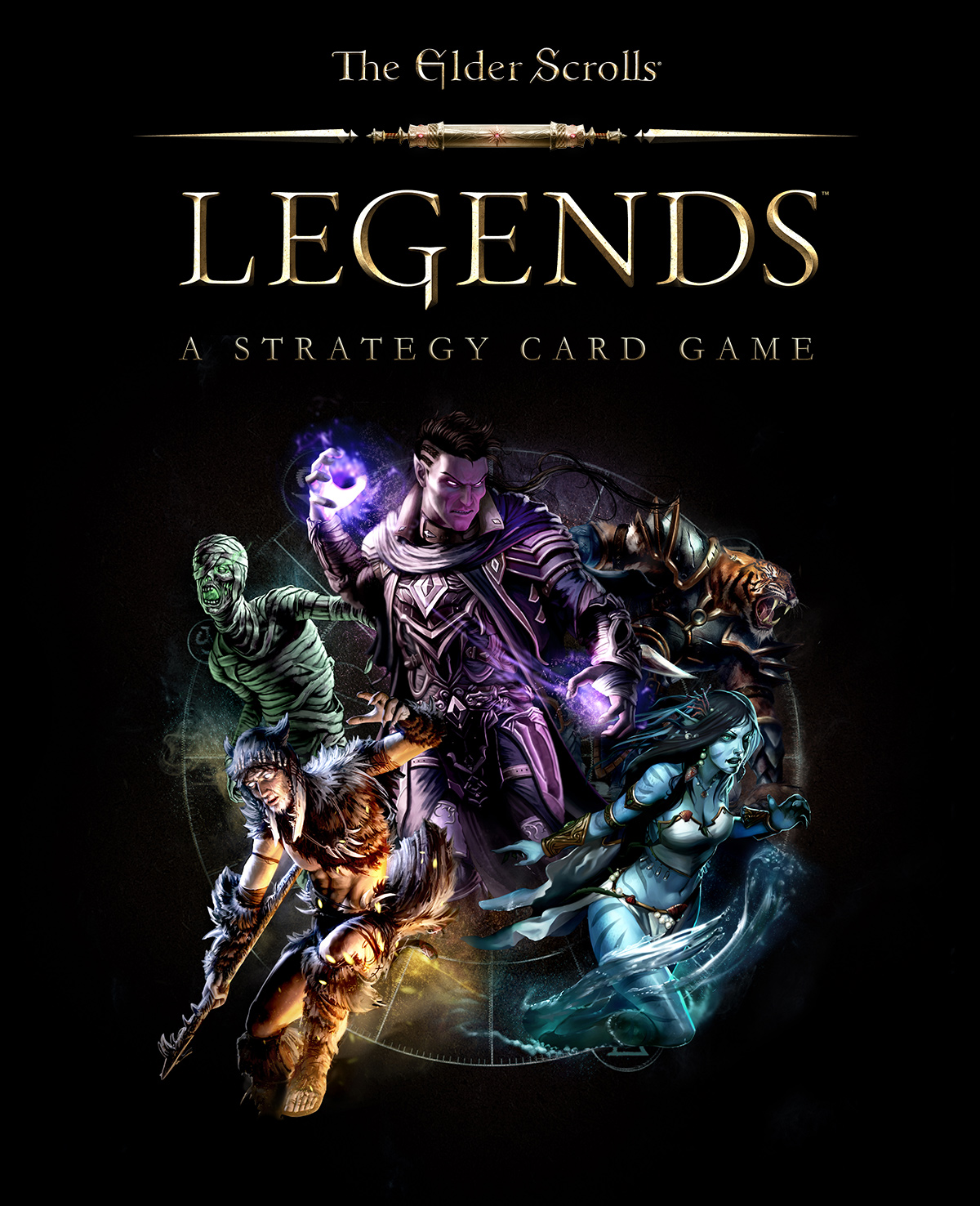 Whether you love the Elder Scrolls series or hate it, a lot of people didn't expect it to get a card game anytime soon. So Elder Scrolls: Legends isn't exactly being talked about in mainstream gaming media, yet it sees a steady feed of curious new players and it has a pretty well sized community. While I would be willing to bet Elder Scrolls: Legends' existence is due to the popularity of Hearthstone, it is rather foolish to say that Blizzard is the only one that should hold a card game. Let's see how Elder Scrolls stacks up.

In Elder Scrolls: Legends you have a story mode that acts as your tutorial to teach you of the various mechanics in the game. Once you reach a certain point in the story mode you can either go play against other players, enter a solo or multiplayer Arena, continue the first story to earn more gold and cards or you can enter ranked mode against players. Arena is a draft mode in which you pick from sets of random cards until you have 30 cards. In the solo arena your AI opponents may have slightly different rules in each match. In a match, you have two lanes that can fit four cards each for a total of 8. Cards in the left lane usually have no additional effect. While cards in the right lane become “hidden” which means they can't be attacked by creatures on the turn they are summoned in the right lane. Every five HP you lose, you get a free card as marked by runes surrounding your HP bar. Some cards can even be played immediately if you get them this way; these are called prophecy cards. Keep in mind that once you get your free cards you cant heal up to get more free cards, Runes are a one and done sort of deal. First to reduce their opponent's HP to 0 wins. 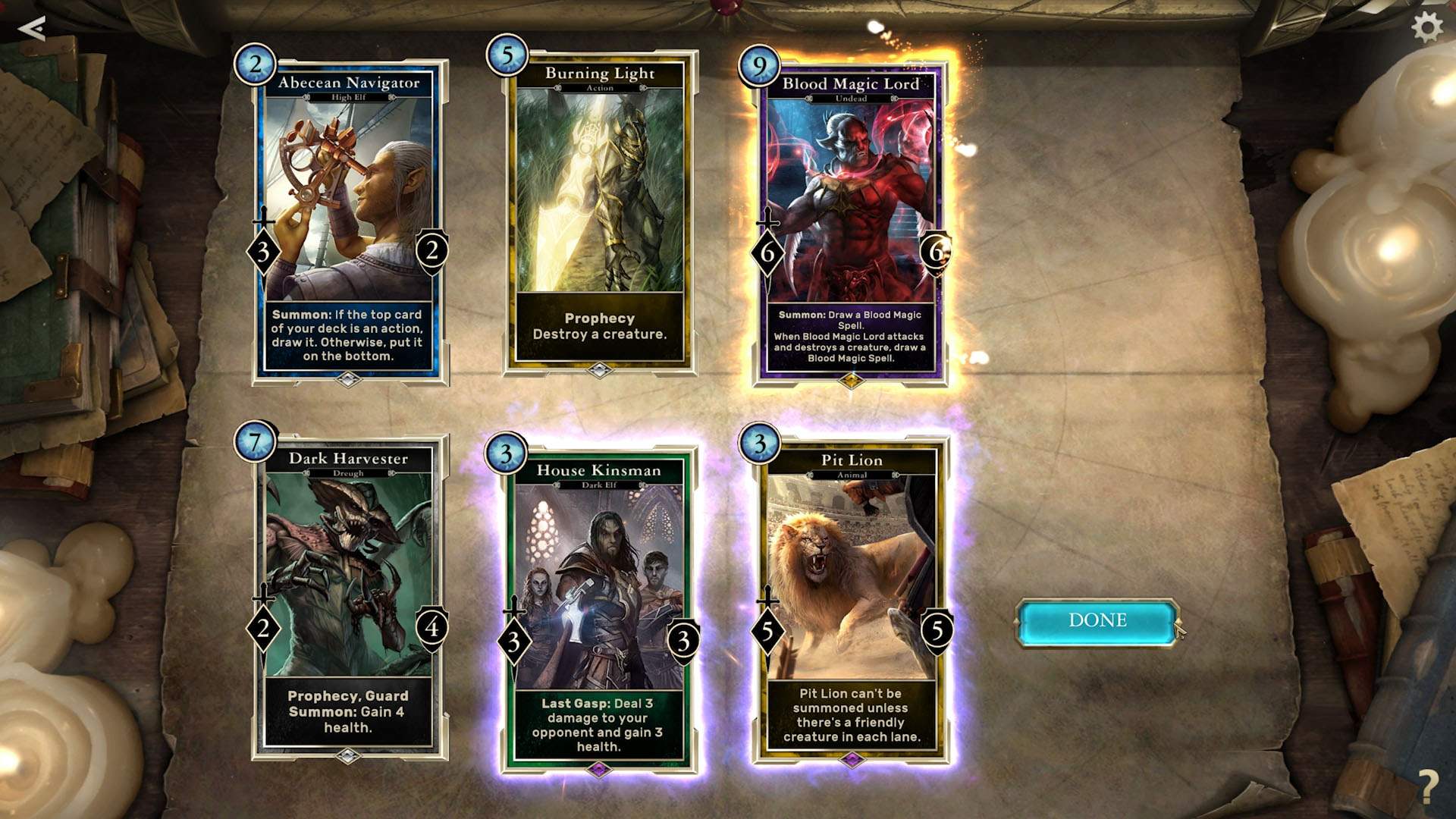 Strong Points: The game definitely has a reasonable price range for new players. Out of all the competition this one has the best ease of access.
Weak Points: This game has no strong unique point other than being based off the Elder Scrolls world. The community interaction is nearly non existent between the developers and the players.
Moral Warnings: You have the usual magic to expect with these card games, arcane necromancy and firebolts.

Graphics are ok; the board you play on is rather boring and the music doesn't have any real variation. The card art is ok and voice acting is lovely and it will surely please any Elder Scrolls fan. Each card is separated into different attribute colors such as strength, intelligence, agility, endurance, and willpower. You also have multi attribute cards and neutral cards to choose from. Any deck can have two different attributes, multi attribute cards that match the two main attributes you have in your deck and neutral cards. With no set class in Elder Scrolls you have the options to make many different deck variations compared to a class restricted game.

Elder Scrolls doesn't have that unique point to really set itself apart from the competition. Sure, there are two card lanes, yet that isn't a extremely unique thing in gaming. While mana builds up on its on instead of having to play mana cards, Hearthstone already beat them to that. The foil cards are just cards with a shining gold border. As of right now I have no idea what the future of Elder Scrolls: Legends will be. Bethesda does not have the close contact with its community that some of its competitors do with this game. Just because they are busy with the Creation Club or Quake Champions doesn't mean they should just ignore what they started. Players are left in the dark on any potential for a tournament scene or future expansions. 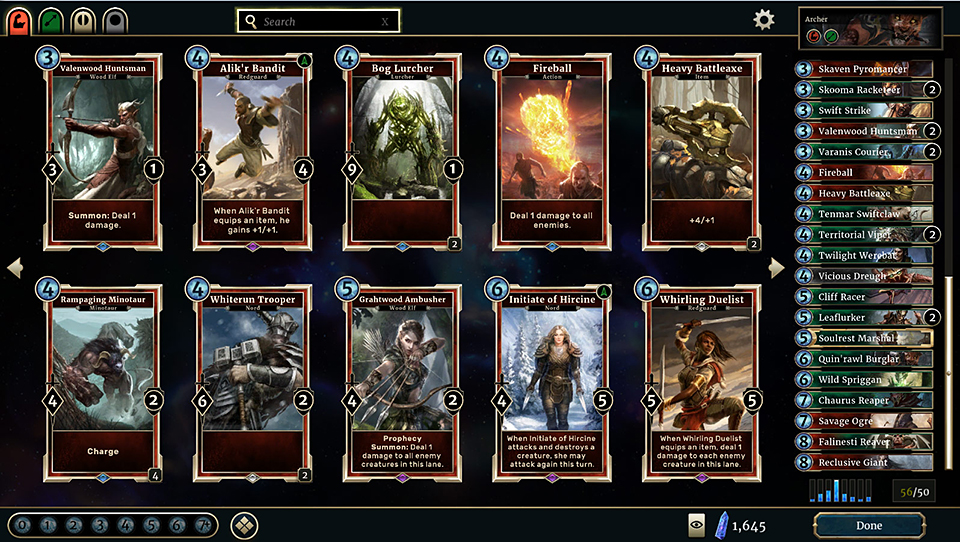 As far as pricing goes, they offer multiple bundles as well as decent complete decks you can purchase for in game gold. On average forty packs will cost you $49.99 and the extra story expansion, The Dark Brotherhood, will cost you $20. You can also purchase event tickets for arena entrances or limited time events so you don't have to pay 150 in game gold. Event tickets can also come in a bundle for $6.99. As of right now I'd estimate I've played about 20 hours at least. During this time, from free packs and in game gold as well as arena runs purchased with both in game gold and free event tickets I have been able to build several decent decks. I have a decent amount of wins under my belt and I have yet to spend money on the game. The game also tells you how much of each set you own. As of now I own 50 percent of the classic set and 30 percent of the Skyrim expansion without spending a penny.

A strange but generous thing they do every six hours is also give Twitch drops: by logging into twitch.tv with your Bethesda account, you can randomly get 600 in game gold added to your Elder Scrolls: Legends account. This makes it easier to get into the game without spending money.

On morality, with the Elder Scrolls series of games you expect a lot of witchcraft and magic so that's no different with this card game. Other than that though there is no gore or violence to really worry about.

While this game was definitely unexpected it is not without its merit. It is a well put together game with a team that has a great depth of knowledge in how to make a card game. Nothing wrong with playing more than one card game.