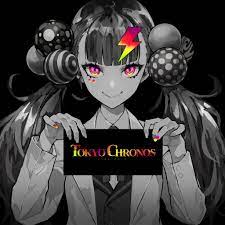 Thank you Sekai Project for sending us this game to review!

Relative to other storytelling mediums, virtual reality (VR) is one of the youngest. As a result, it’s always interesting to see new takes on existing genres, and TOKYO CHRONOS is one of the best takes on the VR visual novel yet – in large part because the characters and story are quite interesting in their own right, and VR just enhances the experience.

Kyousuke Sakurai awakens alone in an empty building. It doesn’t take long before a mysterious man named ‘Lowe’ shows up, taunts you, and then disappears. Once you get your wits about you, you realize that you're seemingly alone in one of the busiest places in the world – Shibuya, Toyko. After a little while, seven other of your childhood friends arrive, and that’s it – you eight are alone, but are happy to be together again after drifting apart during high school. No one seems to remember Lowe, oddly enough...

It doesn’t take long before you and your friends discover that you are all trapped in a huge mirror dome, with impenetrable walls. This mystery – how you got here, why, and how to escape – plays a central part in the story of TOKYO CHRONOS.

The cast is made up of all memorable characters, starting with Kyousuke Sakurai, the main protagonist. When the children were younger, he was their de-facto leader, and he was always gentle and kind. That aspect of his character certainly comes through now, as well. The vast majority of the game is played from his perspective – you can look down and see his school uniform below you, but you don’t usually otherwise see his body.

There are four other girls and four other guys. Each plays an important part in the plot, and all were close to Sakurai when he was younger. His earliest friend was Yu Momono, a girl he grew up next to, who is always positive and looking out for him. The other girls include the brilliant Yuria Togoku, who has even won awards for her work in physics. The other two girls are the quiet Karen Nikaido, and Ai Morozumi, who has a very deep relationship with one of the guys, Sai Kamiya. Sai is the son of a politician, and quite brilliant and resourceful. The other guys are Tetsu Kageyama, who is shy and observant, and the boisterous and friendly Sota Machikoji. Lowe’s presence is a mystery, as he claims he was part of the group, but no one remembers him. He has a rather abrasive personality, another stark contrast to the others.

Once everyone starts to settle in and figure out what is going on (to an extent), a wrench is thrown into everything as someone discovers that the world they are in – called a 'Chronos World' is there for a purpose. The world itself then asks them a question: 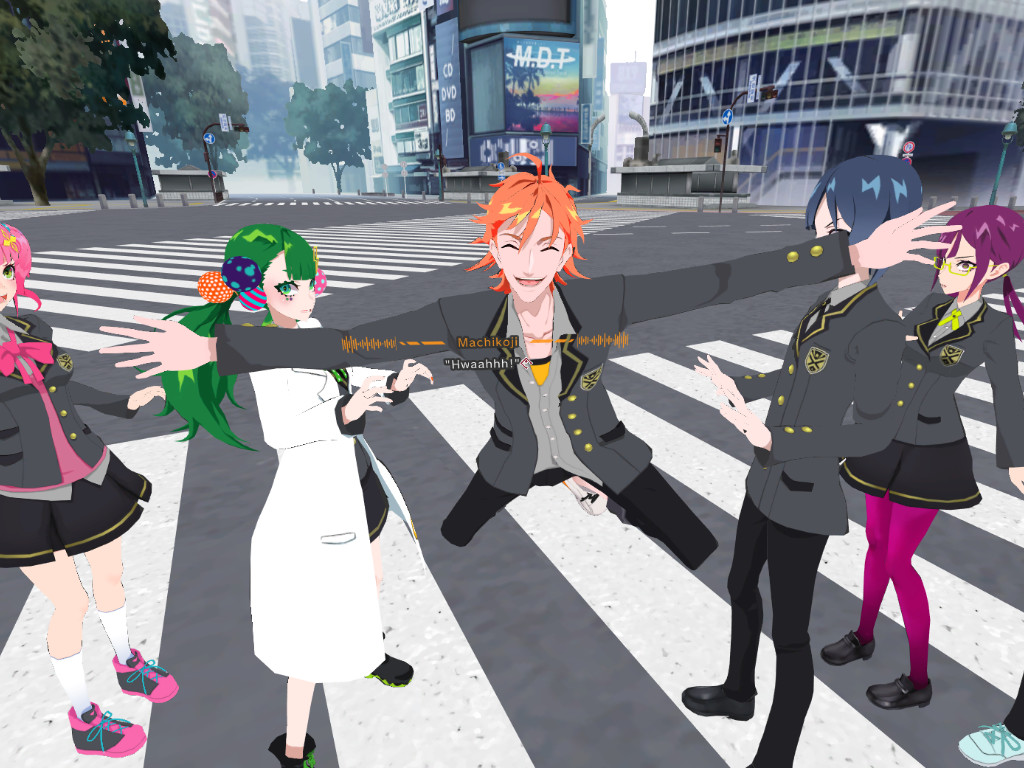 Strong Points: Likable characters; interesting central mystery; mostly excellent writing and localization; great looking set pieces in Virtual Reality (VR); excellent Japanese voice acting
Weak Points: VR could have been utilized better, as it’s pretty much a 3D visual novel with very little interaction for most of it; there is one short scene that was clearly machine translated and makes no sense
Moral Warnings: Strong language, including ‘d*mn’, ‘sh*t’, ‘b*tch’, ‘p*ss’, ‘f*ck’, and God’s name is used; blood and violence is present, including people getting stabbed and bleeding on the ground, or blood on someone’s head from an injury;  {spoiler}one character’s family forced a female to pretend to be a man{/spoiler}

Once they start investigating what is going on, they soon realize that they are all missing key memories – those necessary to solve the puzzle, certainly. This then starts the story in earnest, with each character choosing who to trust, as they work out the secrets of the world, and the reason for its existence.

The story is told primarily through text and (Japanese) voice acting, like many visual novels do. The text follows your gaze, so you are free to look at as much of the environment as you like, though whoever you are talking to does move their mouth to talk, and occasionally will change their positions, like looking at others or pointing. In general, you can tell that the graphics and animations have systems with lower graphics power than the PC VR experience in mind, as most movement, outside of simple mouth movements, are more of a shift from one position to another - PC GPUs can handle much more, but this game is also sold on Oculus Quest and PlayStation VR, which have much lower available resources. Nevertheless, while more detailed animations would be nice, what is happening is plenty clear, and it has very interesting art.

The art style is really neat, though somewhat divisive among players. The anime-style art itself is great - each character has a very expressive body and face that clearly represents their personality. What is more divisive is the size of everyone. When you stand, you are floating a good 10+ feet off of the ground, and all of the characters are equally larger than life. To put it in perspective, I found that the ground approximately matches most of the character's waists, with the legs (and floor) being much farther down. The side effects of this are several.

For one thing, 'peeking' is impossible - you can lay on the floor if you wish, and being a dirty peeping Tom is impossible. While I know some were upset by this, I have no issues with that - and kinda like it, since it's one less thing to mark off for. Another interesting result is that everyone's head and expressions are quite large and in charge - not unlike many anime characters in other mediums. It also makes the scale of the world, and everything in it, just a bit bigger. Buildings loom over you, and are quite intimidating. Inside of a room everything is all around you and big and easy to see. Distant characters and other objects, being larger, are easier to see. I found the resolution and clarity of the Oculus Rift S to be generally a good match for the game, as text was easy to read, and so on. Unfortunately, my original HTC Vive died not long before starting this game to review, so I wasn't able to check it out on a first generation headset.

While most of the game takes place in the 3D rendered world of Shibuya and surrounding buildings, there are several scenes that are memories, or take place in a mental canvas. These use a different approach; some have a montage look to them, while others, especially the flashbacks, have an interesting over the shoulder view, where you see the past in an interesting, iconic way where there is a pitch black room, and little icons or dolls that represent each character. Some of these scenes are quite moving, and do a wonderful job of filling in the backgrounds of each character. Sadly, on one of Machikoji's final scenes, the localizers missed it - and it uses basically unintelligible language, almost certainly machine translated. This is especially noticeable because, outside of some typos here and there, the script is quite excellent.

I found the game otherwise stable and generally technically fine, though once during an extended play session, the world started to 'shimmer' - but this went away after saving, quitting out, and reloading. That was the only notable issue from a technical perspective I found. One small thing to note: loading a save brings you to the beginning of the scene you loaded, not to the very word, like you might find in some visual novels. So, you may have to replay a few minutes worth, but nothing major. 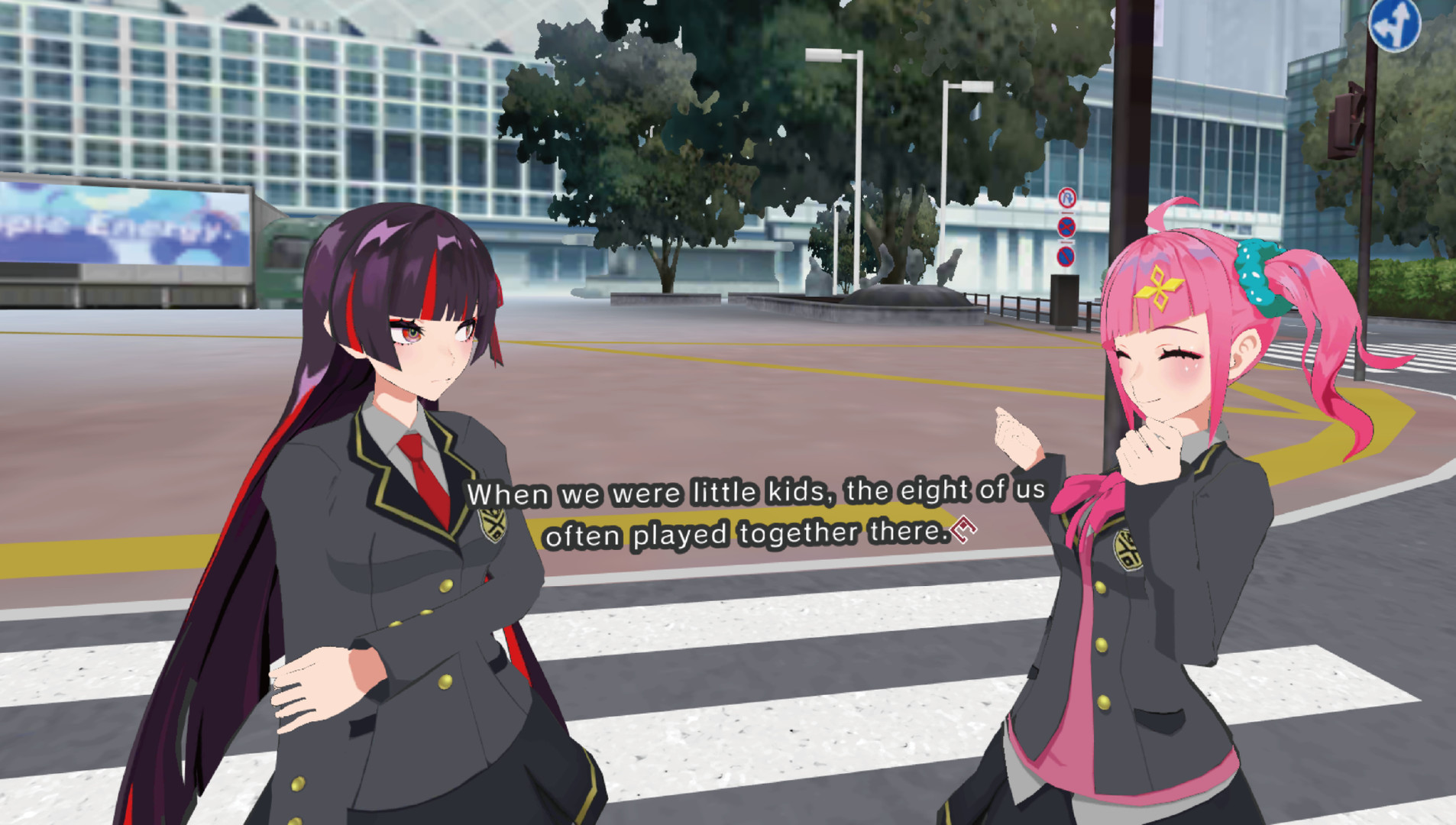 The music and sound effects are well done but not exceptional. They set the mood, and bring out the appropriate emotions, but I won't be rushing out to buy the soundtrack. The voice acting, despite not being able to understand it all, is exceptional. It also helps that each character has not only a distinct voice, but their text has a color, so at a glance you always know who's talking. The voices are good enough that one of the major points of the plot is actually given away through the choice of voice actor - if you are paying attention.

For much of the game, there aren't many choices. The story unfolds before you, and you ingest it. However, after quite a while, they start to appear. As such, they are fairly simple to choose - simply point left, or right. In almost every case, the left choice leads to a character (bad) ending - but you really should see every ending, for several reasons. For one thing, aspects of each character's background and history are only revealed in their (bad) ending. Also, once beaten, you can resume the story almost right where you left off, and make the other choice. There is also a skip scene option that unlocks after a few of the endings, if you've already seen it. It's quite useful! In order to see the true ending, you need to have seen all other character endings, so it's always worth it - and trust me, you want to see that true ending!

From an appropriateness standpoint, there are several things to note, though I would say it's fairly decent compared to other visual novels. There is blood and violence, where you get to see someone get stabbed - or you may choose to do it yourself (one of the few interactive scenes in the game lets you do this), and you need to do this at least once to see the true ending. There is also talk of murder, death and {spoiler}suicide{/spoiler}, and various motivations for these things. Most of the first half of the game is curse word free, but as things ramp up, so do the curse words - little is spared, as ‘d*mn’, ‘sh*t’, ‘b*tch’, ‘p*ss’, and ‘f*ck’ are present, and God’s name is used as well.

From a sexual standpoint it's relatively clean, though while some of the females are well endowed, nothing is beyond realistic, and everyone is fully clothed, while wearing high school uniforms (these include shorter skirts, which again, cannot be looked under). You do get to see one possible outcome of excessive {spoiler}jealousy{/spoiler}, however. Perhaps the biggest issue is also a huge spoiler: {spoiler}One character was forced by their family to become their dead older brother - despite being female. It is not really shown in a positive way, but more like a long-term secret that is revealed. No one rejects her after the reveal, including the girl who seems to have feelings for the (now) her.{/spoiler} There is one scene where you enter the floor where a girl is taking a bath and she asks you to leave; neither you or your character see anything, and he is a perfect gentleman.

TOKYO CHRONOS is honestly a game that surprised me with how much I enjoyed it. After investing a few hours into this story, I quickly found myself grabbing that VR headset every chance I had in order to spend some more time in this mysterious, empty version of Shibuya. I found it just as addicting as many of my favorite visual novels; even if I don't find VR quite as comfortable as reading a story on my monitor, it was certainly worth the extra effort. If the blood, foul language, and other appropriateness issues don't keep you away, and you are looking at trying a different kind of VR experience, then I highly recommend TOKYO CHRONOS - even if you aren't likely going to get much exercise with this VR title (I played most of it in a chair with just my headset on).