Thank you First Contact Entertainment for sending us this game to review!

The early VR games market is, in many ways, at a point in time where developers are doing their best to figure out what is fun within the limitations of current VR, and one of the early discoveries is that wave shooters are fun.

What is a wave shooter?  Well, usually you have a weapon or two, and waves upon waves of enemies come by, and it's your job to eliminate them.  Some have weapon variety, enemy variety, or (rarely) level variety, but they all have you shooting at various still or moving targets.  Gunplay is very well suited to the Vive's controller, so it's not totally surprising that this would happen.

ROM: Extraction is, despite marketing material saying otherwise, a simple variation on the wave shooter.  However, rather than endless waves of enemies that only stop when you are killed, each level has a time limit, during which you have to take out as many alien invaders as possible, while surviving in time for your extraction.  Based on your success and difficulty level, you tally up a score, which is submitted to online leaderboards, so you can see how well you do compared to everyone else.  It's a classic system that works well. 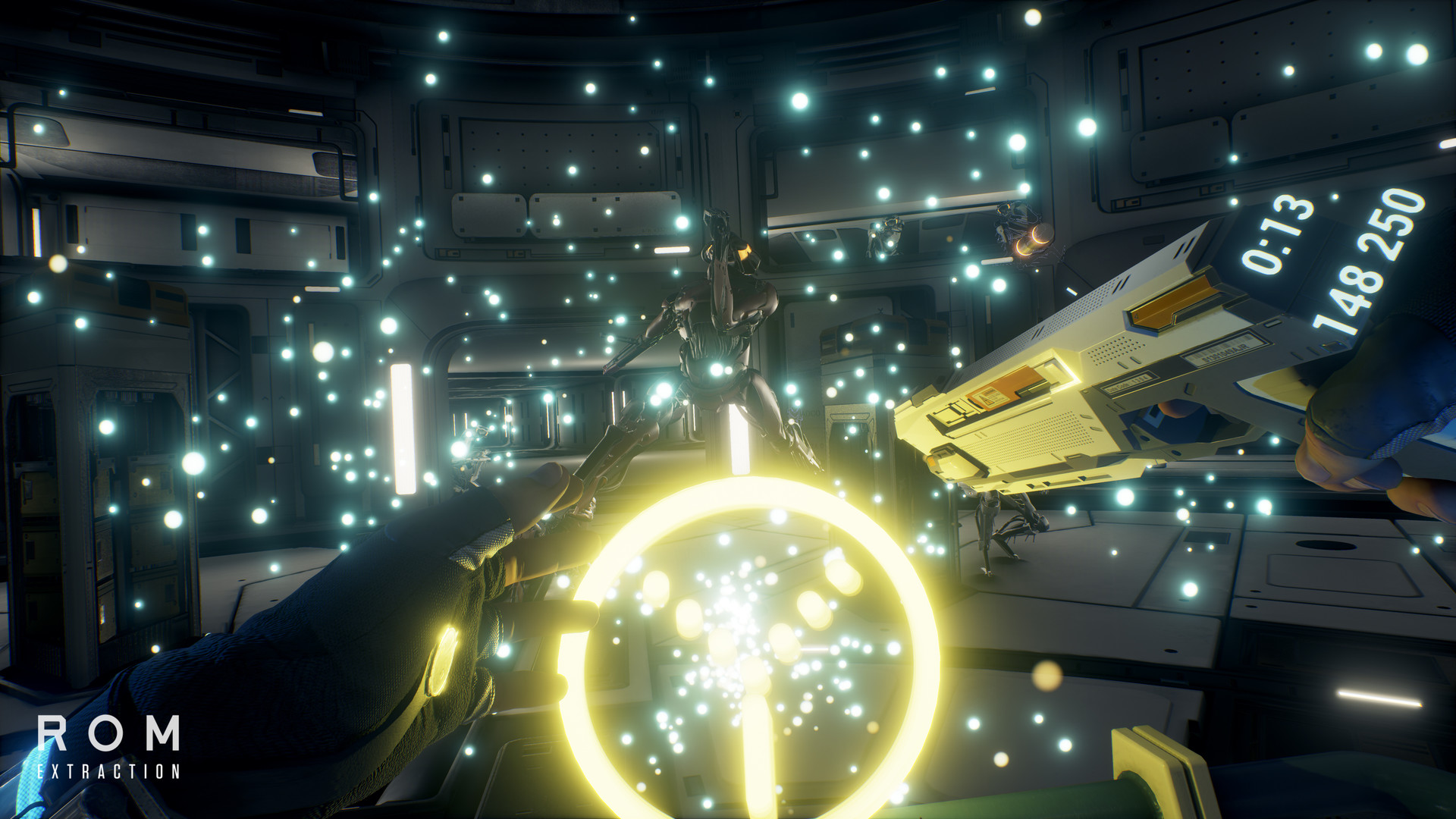 Strong Points: Good graphics and polish; interesting slow down mechanic and power-ups
Weak Points: Very little content; all dark scenes makes it seem blurrier than it should be; marketing tries to avoid calling it a wave shooter as much as possible despite it basically being one
Moral Warnings: Animated violence against invading robotic aliens

A typical game session starts with alarms going off, and a communication from your rescuers saying to hang in there while they prepare for extraction.  They also alert you when there are fresh baddies incoming.  Then starts up the dubstep music, and if you want to win, you start your counterattacks.  In addition to the typical 'shoot at everything' gameplay, there is your off hand where you get to throw all kinds of fancy grenades, and they explode if you shoot them.  If needed, you can slow down your environment, which makes those grenade shots much easier.

Your laser pistol is frankly really weak.  It takes close to ten shots to take down an enemy, and your trigger finger gets tired pretty fast.  If you mostly rely on it, you will likely get very frustrated with this game, as I was at first also. You will not succeed if you do not learn to throw those grenades well.

Your off hand throws a default grenade that explodes on impact or when shot.  If you time it right (slow motion helps a lot, but is not required), it can take out multiple enemies at once, which is good fun.  Sometimes enemies drop grenade upgrades, which only last one use, but are often much more powerful.  These include things like bouncy grenades, chain attacks, and more.  Thankfully, healing is also something that can be dropped. 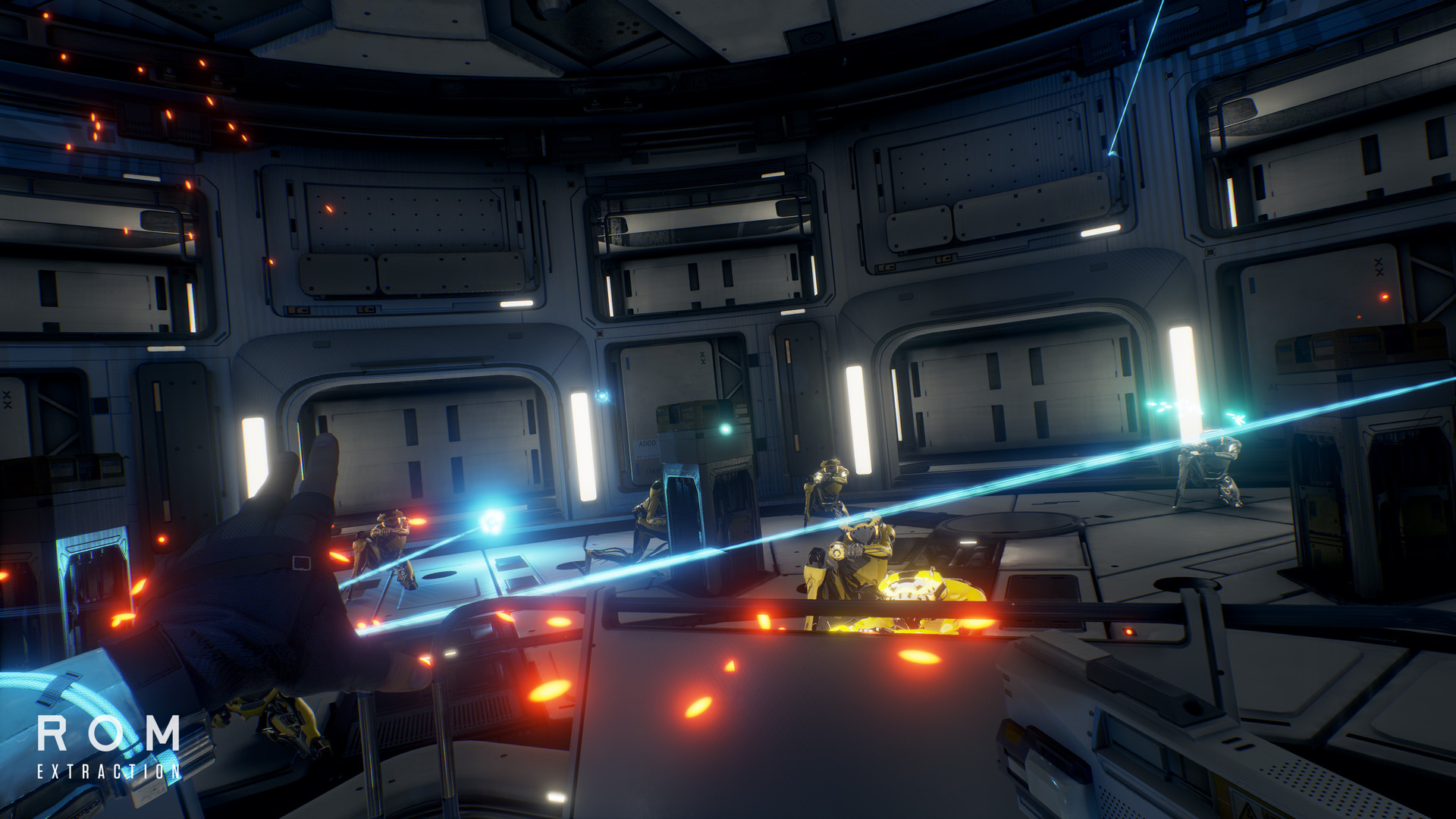 I have a few complaints that I have to air, though.  One is fairly basic: grenade throwing doesn't feel right.  When I lob, it doesn't go where I think it should.  I am not the only person to say this based on a YouTube video I saw, but you do get used to it.  I think the gravity and angle of throwing is off a bit or something (gravity makes sense since you are on a space station).  The gun is so weak that it's almost useless.  You have to pump that trigger a bunch of times to do any real damage to anything.  It's also hard to tell what the damage status of the enemies or yourself is in the heat of battle.  Maybe I just missed the health meter, but the screen does turn red as you get low on health.

And of course, there is the obvious issue: the massive lack of content.  I do know that the developers have promised several free expansions/DLCs, so this issue may resolve itself, but on release (not early access), there was only a singular level to play, for approximately three minutes.  That's it.  The first time I went to play this to review it I though I must have missed something, so I went back some time later. No... there really was nothing else.  If this game was $3 like BladeShield, then that would be just fine.  But at the launch prices, it was too much.  Thankfully, they seem to be keeping their promise, as the first expansion pack was just released.  Honestly, this second level is much more enjoyable than the first, and if it's a sign of more good things to come, will be something to look forward to.  I certainly hope that the developers keep their promise to continue to provide additional free content well into the future.  To be fair, not only did they release the first content pack, they are also staying in touch with the community via the Steam discussion forums.

The graphics are very good, but I thought that the dark color palette doesn't play to the VR headset's strengths.  It makes the game appear blurrier than it is because clarity is sacrificed when there is low contrast.  This is more of a fault with the Vive (which tends to have better colors than the Rift as it is) than anything else; I expect that future headsets will resolve this issue quite well.  For reference, I ran this game on mostly maximum settings (except for supersampling) on my i7 laptop with a Nvidia 1070.

ROM: Extraction is the beginning of a potentially very good VR game.  Its 'throw and slow' mechanic can be fun and interesting.  Morally, there is nothing other than animated alien violence to worry about.  If you enjoy competitive leaderboards, and are looking for something to share with friends in short bursts, this can be a perfect candidate.  I hope that the content continues to grow, or the price is adjusted to make this game a great value.  If it does, it will be easy to recommend.