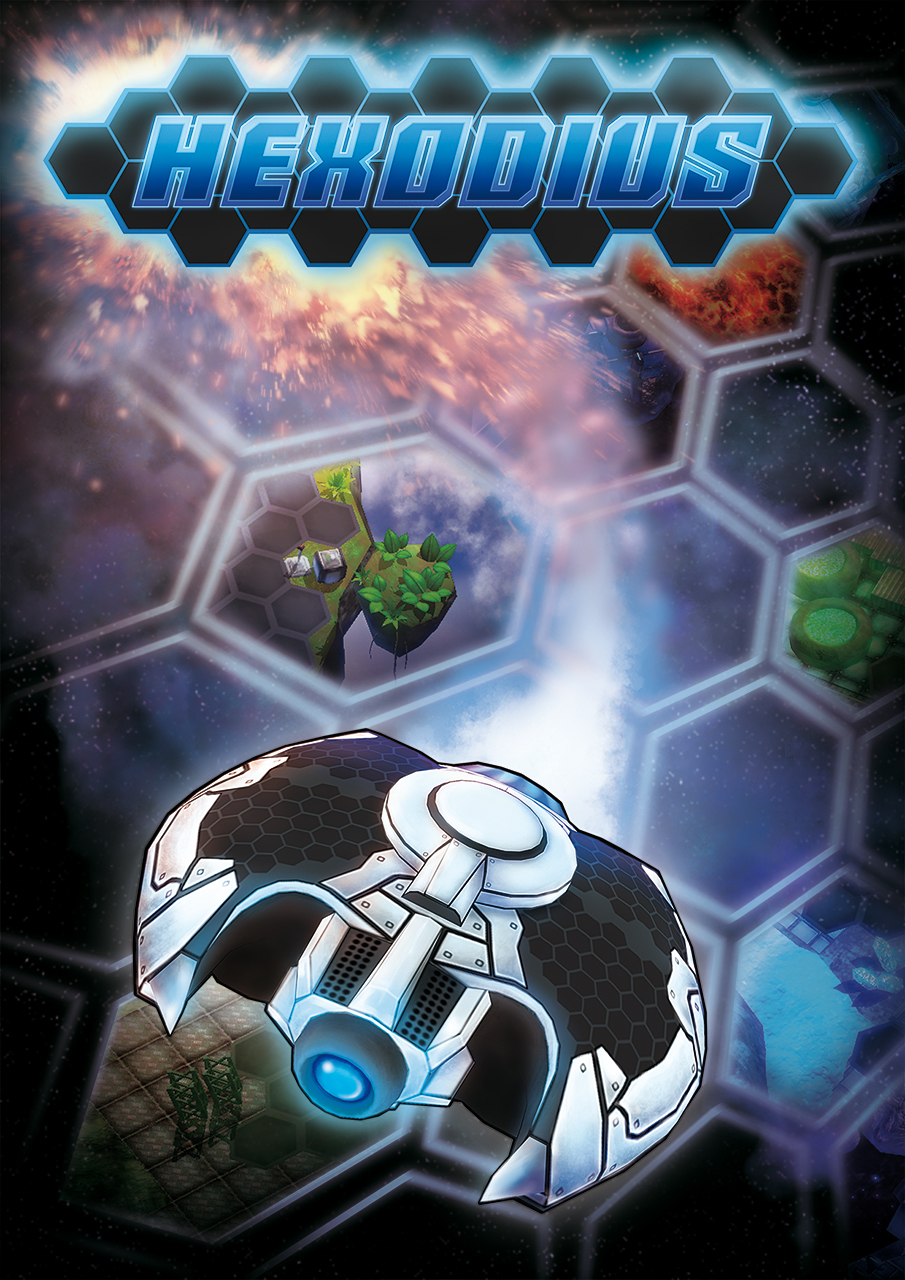 Thank you Namco Bandai for sending us this game to review!

Explore.  Equip.  Escape.  That's Hexodious's tagline and it's a fitting description for this hybrid dungeon crawler/twin-stick shooter. The story is pretty basic and it is not very memorable.  Your robot creator (Fred) built you from spare parts and you're his only hope of restoring the ship's computer back to normal.  Until that happens, you and Fred are in danger as the evil AI sends its hordes of drones to eliminate you.

Each area of the ship is in a hex-based pattern with various themed spaces.  Most of the spaces are battles where you have to survive numerous enemy waves coming at you from different directions.  I like how the interface gives you an arrow letting you know which door the next wave is coming from.  While you can camp these entrances a little bit, it won't work all of the time.  There is also a meter bar on top to let you know how many enemies are left to defeat before your rescue teleport arrives.  I found out the hard way that enemies can kill you while teleporting so make sure the coast is clear before using it! 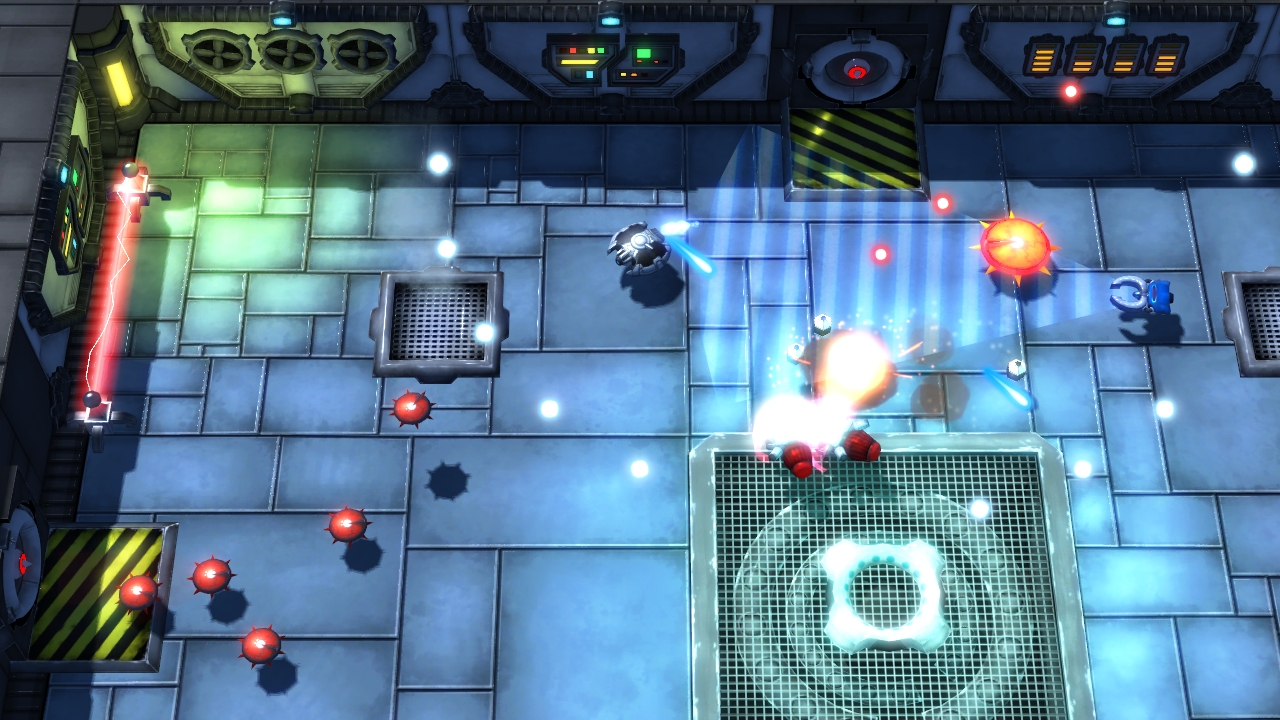 There are also defense missions where you have to keep Fred alive while he's hacking some terminals.  It's hard enough to keep yourself alive, but now you have to protect him too.  Fortunately, as you complete missions you earn money which can be used for repair and ship upgrades.  Whenever you activate a checkpoint, you are repaired for free, but after that, it costs you.    Store spaces let you spend your coin to get some valuable upgrades.  Some of the upgrades are constant, but most have to be assigned and activated.  The permanent upgrades include ship speed, shield, and firing rate increases.  The triggered upgrades include shields, mines, turrets, EMP fields and more.  When you start a level your upgrades have to warm up before you use them and they have a cool down period before you can activate them again.

Aside from the boss battles, the generator missions are pretty challenging.  In these levels you have to destroy one or more guarded generators within a time limit while enemy waves are unleashed.   It pays to explore and leave no level unexplored.  You just may uncover a bonus level where you can score some extra money and equipment upgrades by completing a random timed challenge.

Even with the dungeon crawler exploration and upgrade gameplay, Hexodius is still primarily a twin-stick shooter.  The Xbox controller is perfectly suited for this style of gameplay.  The left stick controls your ship while the right stick fires your ship's gun in the desired direction.  While the controls seem simple, it gets complicated once you assign the shields, mines, and turrets to the controller's buttons and triggers. 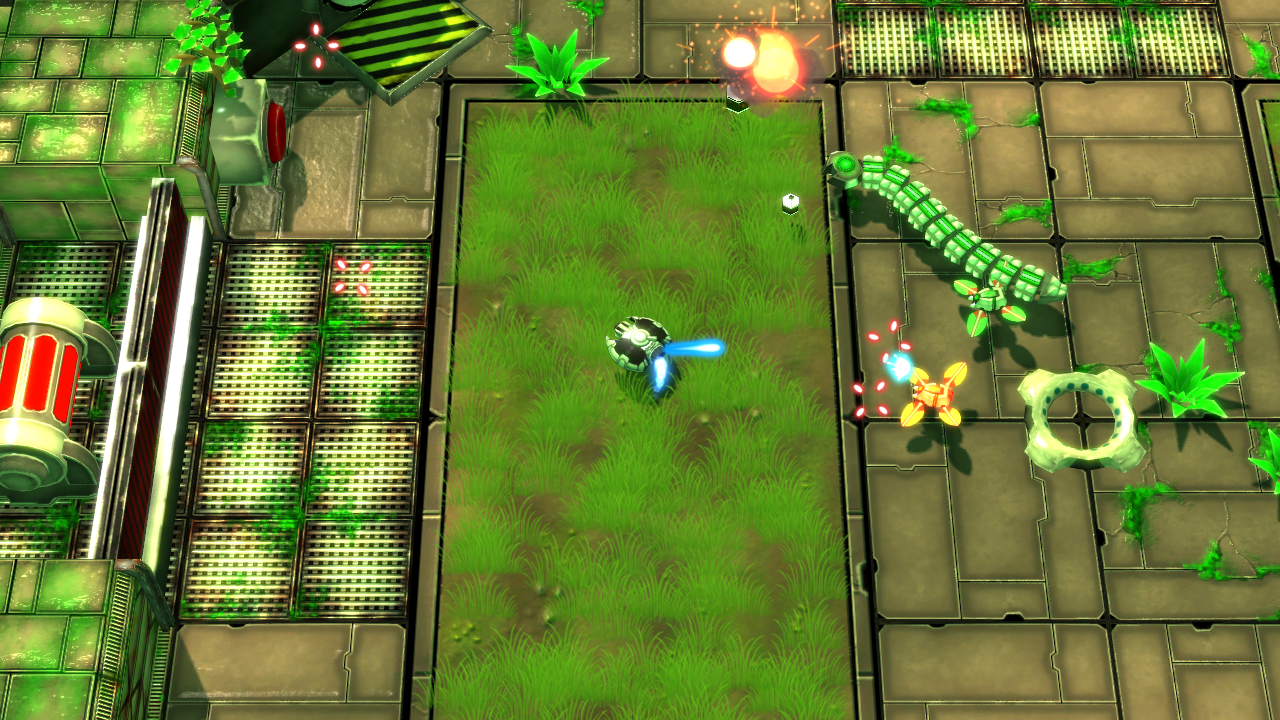 maneuvers.  The first few enemies don't fire back at you but many others do.  Repeatedly.  Other enemies have nasty attacks or defenses.  Some enemies will slow down your ship's movement speed and other enemies can only be hit at certain angles due to protective shields.

As you advance to new areas of the ship you'll encounter various enemies, bosses, and changes of scenery.  Graphically, this game looks good but it won't blow you away.  The same goes for the sound.  Fred's voice is computer jibberish and the background techno music is nice but not memorable.

While the gameplay isn't groundbreaking, it is fun.  A co-op multiplayer mode would have been a great addition to the story and arcade modes available.   While this may not be the best twin-stick shooter out there, it's still decent.  Fortunately there is a demo available so I would recommend checking it out before parting with your $10.