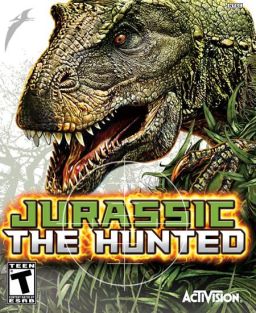 I know what you’re thinking, and no, this doesn’t have to do with Jurassic Park; but the further I got into Jurassic: The Hunted, the more thankful I became that it isn’t. The idea of a Jurassic Park shooter seems like contradiction of itself; running and hiding were always better tactics against the monsters brought to life by John Hammond. No, Jurassic: The Hunted brings to life a different kind of monster, one who is only interested in being filled with bullets while being as unthreatening as possible.

In case it wasn’t clear, this is not a thoughtful stroll through a National Geographic program; in fact, this title has much more in common with some of the more recent entries in Cabela’s hunting series. Both have respect for their topic, but it’s the same kind of respect that a young teenage boy holds for the military: “Guns are awesome! Shooting stuff is awesome! Murdering anyone who looks at me funny is awesome!” It’s an immature perspective, and it doesn’t give its subject the weight and reverence that it deserves, but it also displays a simplistic, childlike view that isn’t often seen in this genre anymore.

Unfortunately, it seems like only half of the development staff was trying to create this enemy-rich, trigger-happy atmosphere. It’s almost as if while the gameplay programmers were hard at work trying to make the best of an unfavorable situation, the other half of the team was convinced that this B-grade game had absolutely no hope of being a worthwhile project.

The first hypothetical team, tasked with designing the levels and game mechanics, was well aware that they were working on a budget title. The finished product would be unlikely to sell even close to a million copies, would probably be landing in bargain bins shortly after its release, and only the major publications would even bother reviewing it. “Just finish the thing and be done with it,” would be their motto as they hastily threw scribbled enemy and level designs at the other team. 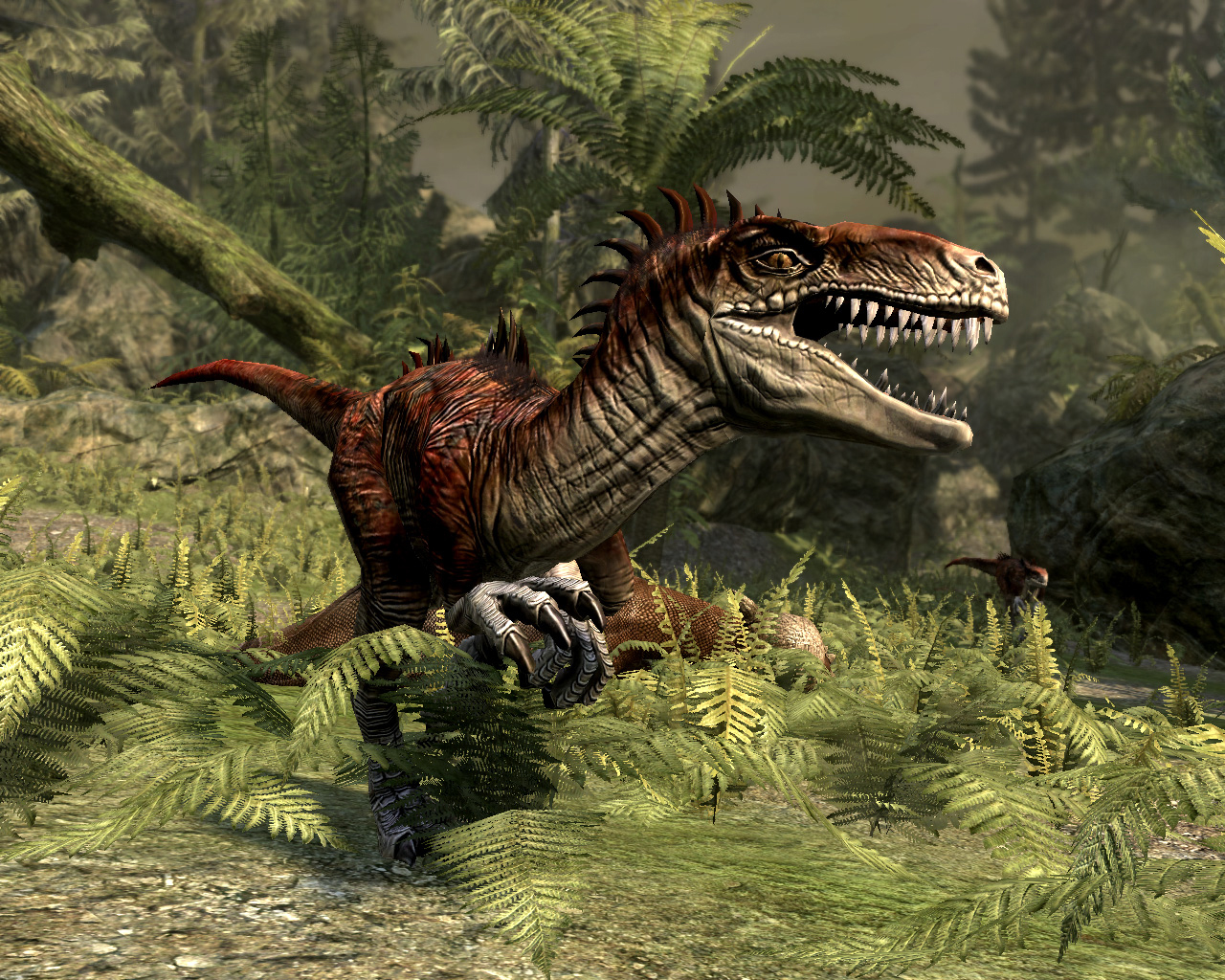 That other (imaginary) team however, was much more interested in the project. They remembered the days before all of the History Channel video games and when they made decent, if not a bit below average, titles. They knew of Chaser and Gene Troopers, underwhelming titles to be sure, but they were the best Cauldron could offer, and something the Slovakian developer could be proud of.

So a conflict arose, one between seemingly indifferent designers and an impassioned development crew. The designers were hardly working at this point; it was more along the lines of doodling map layouts on napkins while trying to avoid wasting any thought or effort in this forgettable title. Bits and pieces stolen from other games, some obligatory turret defense portions, and dinosaurs taken from whatever comes up first during an internet search were all sufficient enough for the first team, but the rest disagreed.

Although this would never be remembered as the developer’s greatest effort, anything was better than just being another one of Activision’s sweatshops, churning out sequel after sequel of a series no one cares about anymore. This was a chance to do something, maybe not something great, but something. It’s going on Cauldron’s résumé either way. Isn’t a decent, if a bit lackluster, budget game worth more than yet another mediocre title churned out by yet another faceless studio?

While traversing the uninteresting and characterless jungles, swamps, and fields the story travels through, I couldn’t help but notice just how much creativity and effort was put into the strangest places. Most shooters have difficulty in making the guns feel convincing, but Jurassic: The Hunted’s weapons had more weight and power than most other shooters I’ve played. This was made even more fascinating to me when, upon inspection of the dinosaurs’ corpses, I discovered bullet holes exactly where my shots were placed. 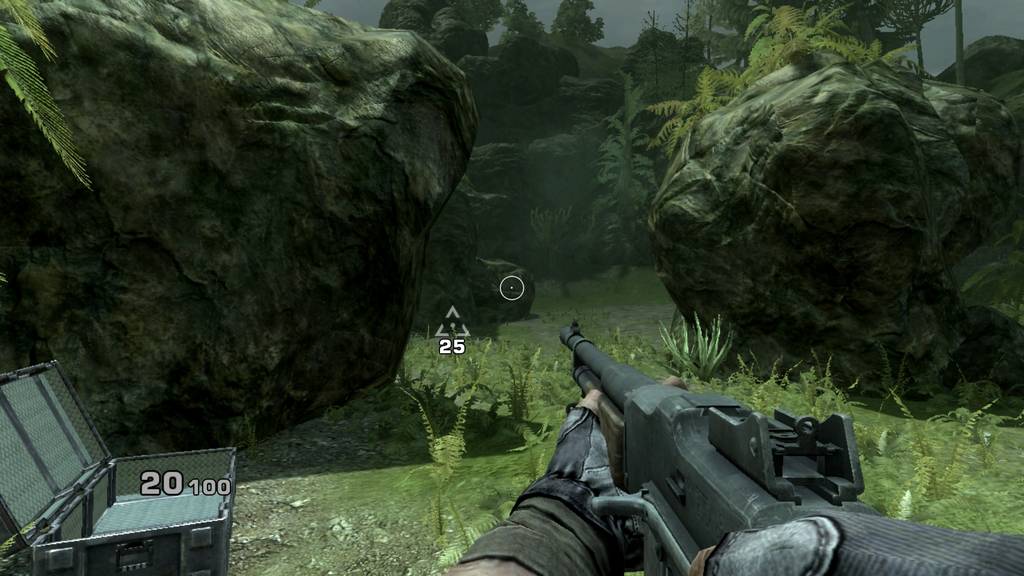 So many interesting (if a bit unoriginal) ideas exist, like the health meter that blurs the player’s vision as damage is taken or the excellent use of bullet time to aim for the beast’s vital organs, but the problem is that they’re packaged in such an underwhelming shooter. Perhaps within the context of a better story and slightly less awful level design, these could have been standout features of an average shooter, but that’s not the case.

From the generic U.S. Navy Seal hero to a pathetic explanation of how he travelled back in time, everything feels forced and half-baked. Even attempts at cursing fall flat as the occasional d*mn or a** carry no weight or emotion. I’m almost sad to say that killing dinosaurs had more of an impact on me; especially some of the more intense moments where a particularly vicious raptor would leap at me only to be stopped short by a blast of my shotgun were thrilling to say the least.

There are still times when I think about the Jurassic: The Hunted and just sigh. I’ve felt bad while playing video games before, but normally it’s caused by a twist in the story or the thought of what else I could be doing with my time. This is a different kind of emotion: pity. Whether it was only two or twenty people, someone gave their all to make this game worth playing. In some small way, they succeeded; guns feel weighty and powerful, slow-motion is fun no matter where it’s used, and little details in the graphic design make the experience much far more engaging than it should be. It’s unfortunate that the engaging experience is buried under so much lazy design though; because I’m afraid there are far too many problems to warrant anything more than a day’s rental.