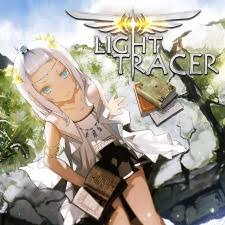 A mysterious princess is in need of your assistance. Her kingdom is suffering from a serious sickness and she needs to reach the top of the Tower of Bellbatis to find the cure. As a helpful deity-like being, your job is to guide her by showing her the path she must take to save her people.

To play this PSVR exclusive 3D puzzle/platformer, you’ll need to have two Move controllers. The controller on the right is in charge of illuminating the princess’ path while the left controller rotates the tower to get a better perspective. Like many platformer games you can make the princess jump across moving platforms and collect floating gems/coins along the way. Some of the platforms are controlled by you using circular and up/down/left/right hand gestures.

In total, there are eight chapters with five levels in between them. Each chapter unveils new terrain and challenges to master. In the beginning, you’ll have green grass and stony ground, but later you’ll need to contend with slippery icy surfaces and gravity flipping platforms. In the event that the princess falls off of the tower or comes in contact with an enemy or dangerous object, she’ll be teleported to the last checkpoint. Thankfully, the checkpoints are plentiful in this title. 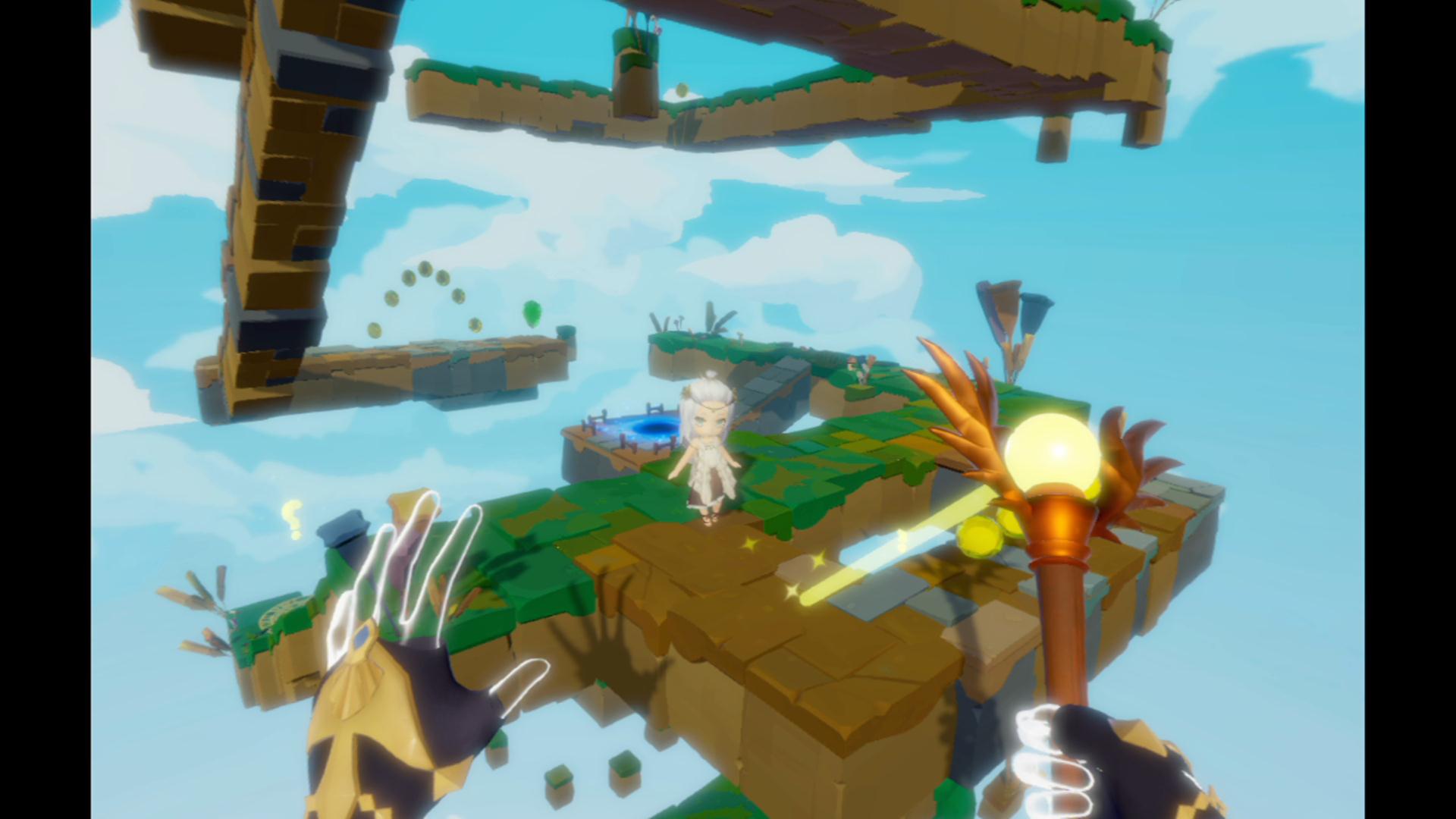 Despite the numerous checkpoints, many of the puzzles are frustrating to get past. To make matters worse, it takes a while to get everything positioned properly to attempt a difficult jump or avoid injury from enemy attacks. If you have past bouts with motion sickness, you may experience it in this title with all of the world shifting and standing position required to play this title.

Because of the difficulty of this game, I don’t recommend it for gamers who are easily discouraged. It is pretty tame morally speaking with the possibility of the princess plunging to her death or being attacked by enemies and bosses. At first, the princess can’t attack and has to rely on defensive only maneuvers.

Dexterity is a must to successfully climb this tower. Your left and right hands will have to do different tasks and one wrong move will put the princess in harm’s way. If you can multitask, then you’ll do well in this unique VR game. 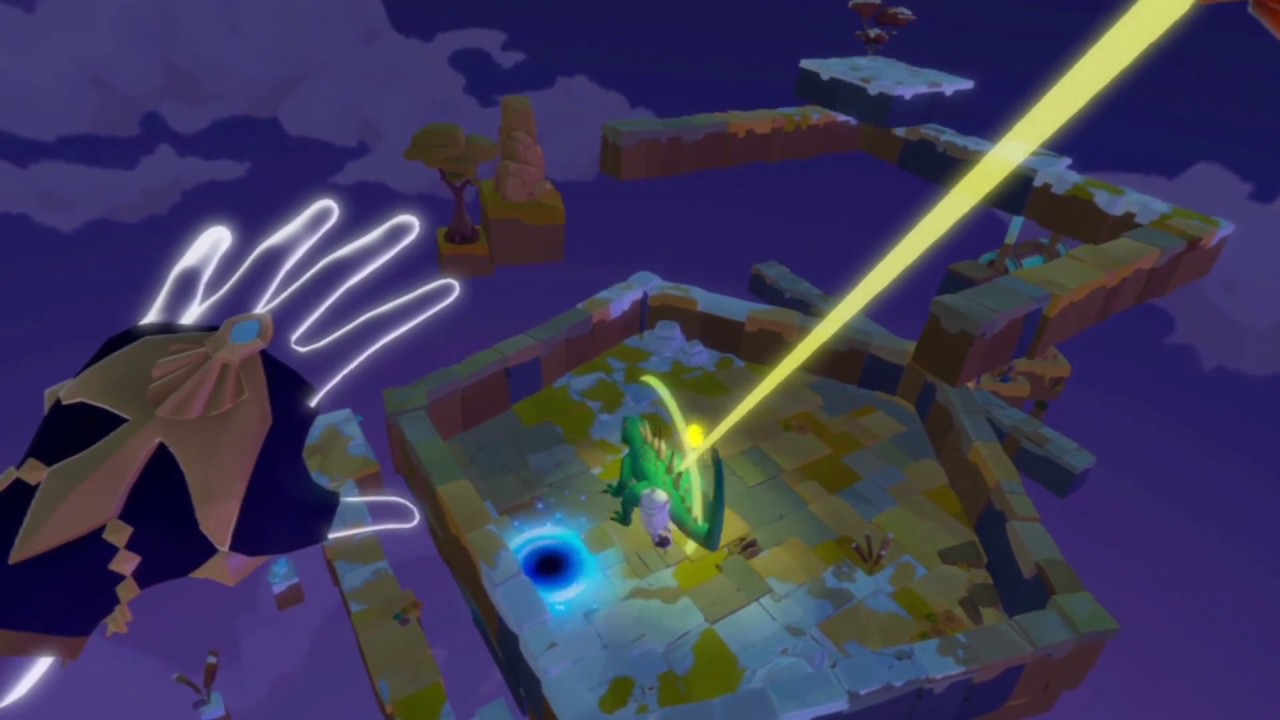 The visuals are colorful and the variety between the chapters is good. The level design is solid if not cruel at times. Throughout the game you’ll learn several new tricks and maneuvers to keep things interesting.

From an audio standpoint this game is decent. There’s a fair amount of background music variety and the voice acting is good. Given the high levels of frustration some more soothing music would have been appropriate here.

In the end, Light Tracer does a lot of things right but can easily frustrate some gamers. Like other PSVR titles, I ran into some controls/tracking issues but when I repositioned myself they were corrected. If you’re looking for a unique and challenging VR puzzle/platformer, Light Tracer is worth adding to your PSVR library with a reasonable $14.99 asking price.

The content on the PC version of Light Tracer is virtually identical to the PS VR release. The graphics are a bit sharper, and if you use a higher resolution headset, quite a bit sharper than on PS VR. The PC/Steam version was originally designed for HTC Vive, and even though I was using it with an Oculus Rift S (which did work fine), all of the button prompts and tutorials were written and designed around the Vive controllers. For example, when it says you need to touch the touchpad, you instead need to push in on the joystick. Pushing in on the joystick to simulate pressing the touchpad to rotate platforms and such works, though it was a bit unwieldy until I got used to it. You could just touch and direction on the right controller to encourage our friend to walk, and was much easier to do than moving things around.

The company logos were double-vision blurry when starting the game on the Rift S (they were actually clear if I crossed my eyes, which I can do on demand) but there were no other graphical issues that I noticed during gameplay; it looked crisp and sharp. The most important control, the pointer, worked just fine, which is a big improvement over PS VR's easily glitched tracking. Even with the more accurate controls, the game is still a bit cumbersome, and falling off is quite easy to do on accident.