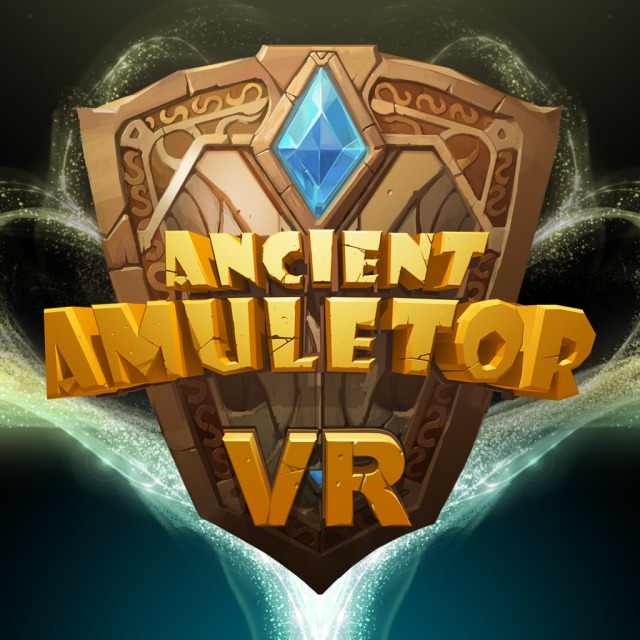 Thank you TiGames for sending us this game to review!

We have reviewed and enjoyed a couple of tower defense games in VR. Like traditional tower defense games, in Ancient Amuletor you’ll have to defend crystals. Instead of deploying defenses, YOU are the main line of defense. You can teleport to different areas and hurl various attacks at the waves of enemies coming to smash your crystals.

The base game has two worlds, Desert and Empire, and they each have two levels with a boss at the end of the final one. There are also four playable characters out of the box. Each class has a unique attack method and skills to unlock and learn. Two more worlds and a Viking character are available for purchase with a $2.99 Into the Ice DLC pack. This DLC is free on Steam.

With only four levels to play, there’s not a whole lot of content in this game. Thankfully, there’s plenty of variety in characters and difficulty levels. The four difficulty levels are Easy, Normal, Hard, and Endless. The last two are initially locked until you complete the levels at the previous difficulty level. 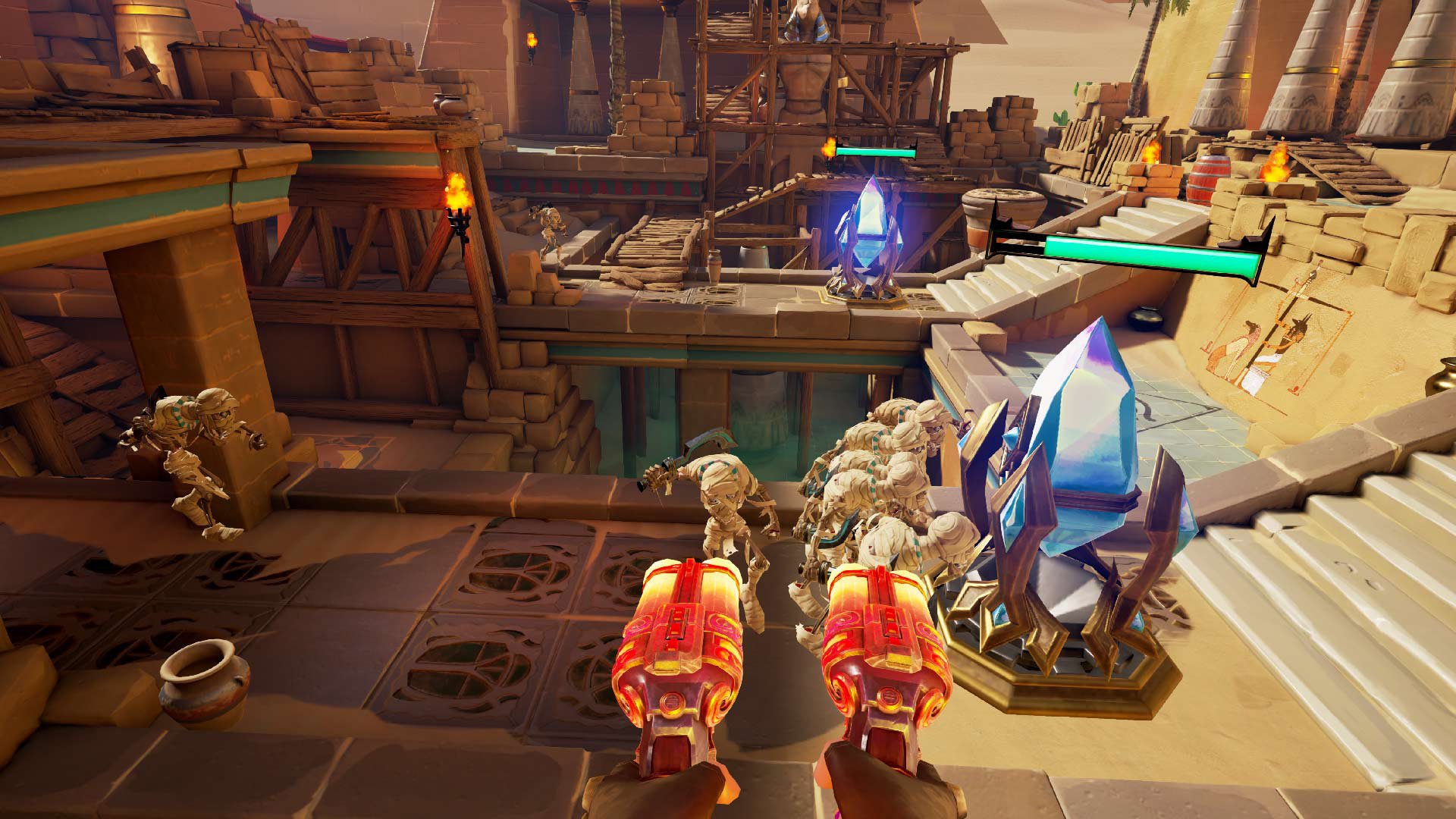 The characters are what ultimately make this game interesting. During the tutorial, you’ll become acquainted with the archer, Lia. Her controls are pretty straightforward with your left arm holding the bow steady and your right arm drawing the bow string back and releasing the arrow(s). Lia’s power skill is the ability to hit multiple enemies with one shot.

The other characters' attacks took some trial and error to learn but I got them all figured out pretty quickly. Katie is a dual wielding gunner and a quick flick of the wrist upwards will reload the guns. Harry the mage conjures an orb from the grimoire on the left hand and flings it with the wand on the right. Park the puppeteer isn’t available until you complete the desert world, but he’s worth the effort. With Park you can summon a tank-like puppet after you warp and then when it’s deployed, you get to control its arms and attack enemies nearby.

Some of the enemies take multiple hits before they go down. There is some variety in their heartiness and attack methods. If left unchecked, mages will lock teleportation pillars making it difficult to attack enemies in their vicinity. Archers can attack crystals from a distance and they do a fair amount of damage quickly. Depending on how many crystals are still standing at the end of the waves, you’ll be awarded between one and three stars for the level. A score is also assigned and shared on the global leaderboards. 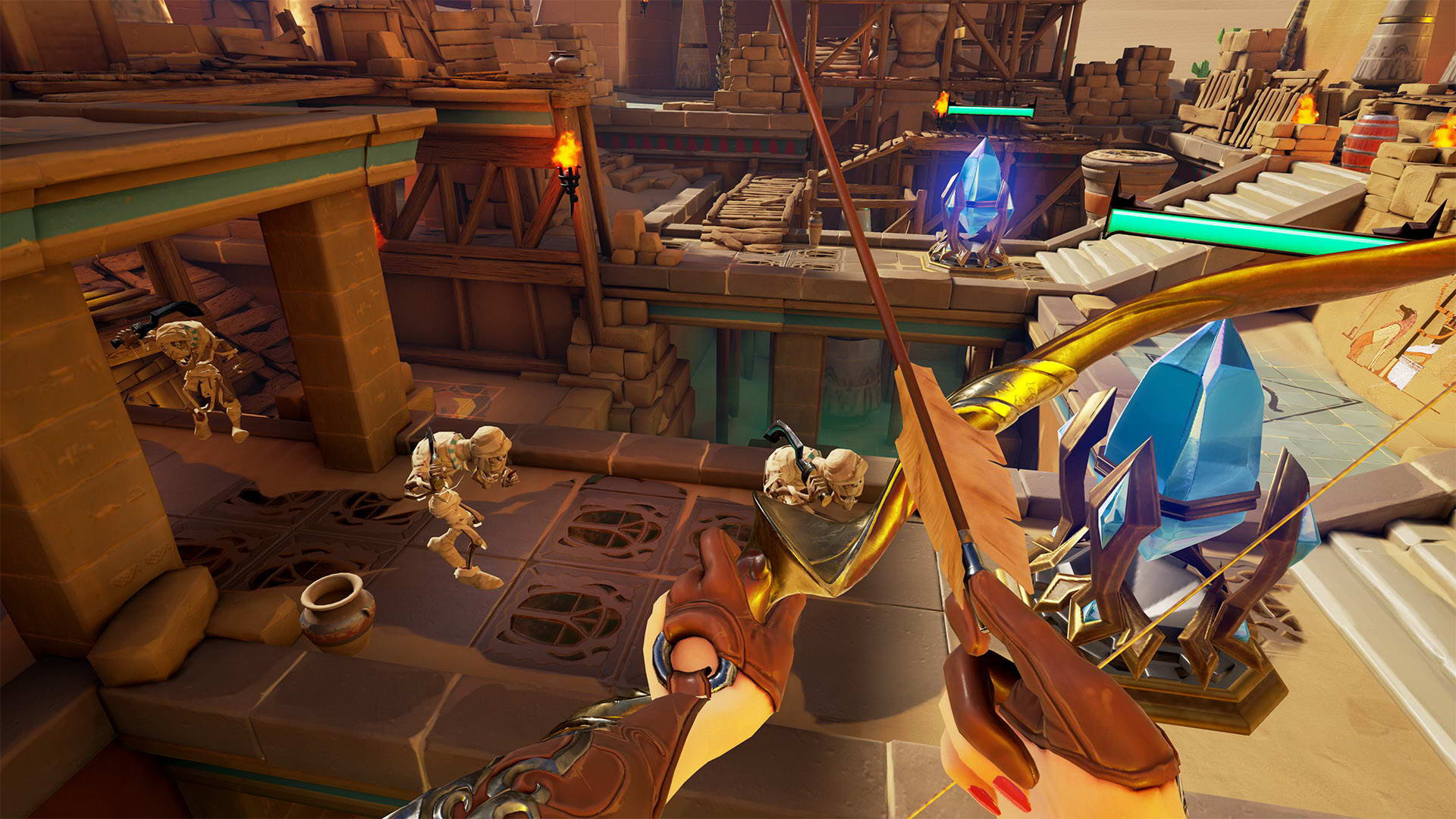 Up to three players can work together in defending the crystals or fighting against immense bosses. Sadly, I was not able to join or partake in any multiplayer action.

From a moral standpoint, this game is pretty clean. The violence is rather cartoony and there is no blood or gore shown. Magic use can be avoided by not playing as the mage, however enemy mages will still use their magic on you.

Like other PSVR games, I experienced some calibration issues and often had to re-calibrate to properly attack enemies. Keeping a standard controller nearby to calibrate while wearing a headset and two move controllers is rather annoying. Thankfully this game was still fun despite the technical difficulties.

Because of the lack of multiplayer and overall content, it’s hard to recommend this game at its asking price of $19.99. I have seen it on sale for 50% off and for that price, it’s worth picking up. If you’re still unsure, there is a demo available to try.