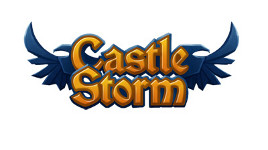 CastleStorm is a fun physics strategy game where your goal is to typically destroy your opponent’s castle with your ballista.  Your ammunition varies from javelins, garbage, chunks of ice, maces, sheep, boars, bombs, laser crystals and more.  Alternatively, you can send your troops and bring their flag to your castle to clinch a victory.  If you’re the kind of person who likes to get their hands dirty, you can momentarily spawn a hero into the fray to crack some skulls.

Yes, this game is violent.  I don’t recall much blood, but you do get rewarded for multikills and head shots.  The humor is good but gets juvenile at times with bestiality, animal digestion issues, and outhouse cracks.  The rest of the jokes are great and kept me entertained throughout the story which comprises of two campaigns (Knights and Vikings).  The Knight and Viking kingdoms are divided and you begin by fighting against the Vikings and later alongside them. 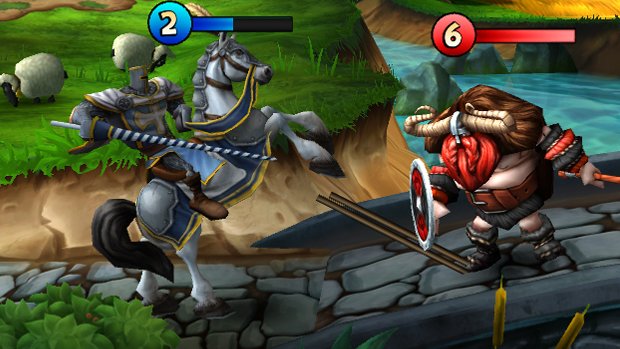 Strong Points: Fun concept with multiple paths to victory.
Weak Points: Some levels are challenging, but they make you stronger in the long run.
Moral Warnings: Some potty humor and violence.

There are both storyline and optional quests to complete.  I highly recommend doing all of them since you can earn money to upgrade your troops, castle, magic, and weaponry.  There is a level cap of ten which gets quite costly since each level costs more than the previous one.

Besides customizing your troops, you can edit your castle layout as well.   Each castle room serves a purpose and when that room gets destroyed, you can no longer use its functions until the next battle.  For example, if your barracks are demolished, your army limit is back to the default of five and some troops may no longer be available.  The rooms in the back of the castle are safer than the ones in the front (line of fire).  Personally, I stuck with the default layouts which get progressively better as you get further in the story.

Each level has a main objective and bonus objectives.  Some of the bonus objectives may request that a particular unit is troop of the day (most damage) or that you complete the mission within a certain time frame.  Your final score is determined by several factors including the difficulty you played at, accuracy, damage your castle took and the time it took to complete the level.  You are awarded between one and five stars.  Five stars are only possible if you play at the hardest difficulty.  I beat most of the levels on normal. 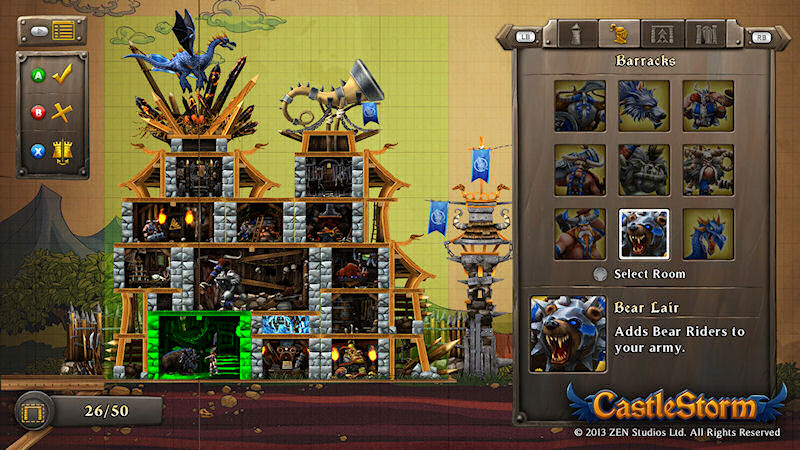 Besides besting your own scores, there is plenty of replay-ability in the multiplayer arena.   An Xbox Live Gold membership is required to play others online.  For those without Xbox Live Gold, you can play local multiplayer. Finding an opponent was relatively quick but not painless for me since I got my butt kicked in a hurry.  Once I beat the game, I tried again and actually won.  Upgrades made in the single-player campaign do no carry over which makes it a fair game for both players. There are three modes altogether and two of them are co-op.  You can fight waves of enemies together in hand-to-hand combat or in the castle where one player controls the ballista and the other commands the ground troops.    The last mode is player vs. player split-screen castle take down.  The last castle standing is the winner.

There is plenty to do and lots to love about CastleStorm.  The graphics are vibrant and the characters have a lot of detail.  Units of the same type all look alike, but the bosses are unique and intimidating.  The sound effects are fitting and I enjoyed the background/menu music.  Even though it was repetitive, it still managed to get stuck in my head.  One quirk I noticed is that sometimes the game's volume would start off loud and then adjust to normal.  Other than that glitch, the game ran fine with no issues for me.

CastleStorm is currently available on Xbox Live Arcade and may come to PC and mobile devices soon. The price of 800 Microsoft Points is reasonable (which comes to roughly $10). I find CastleStorm to be especially worth it if you have an Xbox Live Gold membership. There’s a demo available if you’re interested in giving this game a test drive.