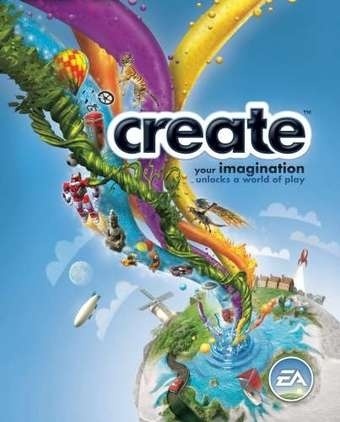 Note: At the time of this review, the online in Create had already been disabled. This will not affect the review in any way.

As much as I loathe the edutainment genre (excluding The Oregon Trail) for simplifying existing ideas while injecting unnecessary trivia and math problems, there’s always been one sub-genre I’ve found intriguing : the chain reaction puzzler. With the perfect amount of planning, experimentation, and luck, players can build wild devices that, while serving no practical purpose, force them to think beyond the obvious and into the unusual.

It’s an underused genre, though it’s not hard to understand why. Problems with balancing difficulty and complexity, worries about sale numbers, and lack of a unique hook deter many from even trying. Sadly but not unexpectedly, EA Bright Light’s attempt failed in all of these areas. Uninteresting puzzles, seemingly random difficulty, and a generic feel cement Create firmly in the mediocre, while the combined sales of 0.19 million clearly left a bad taste in EA’s mouth. 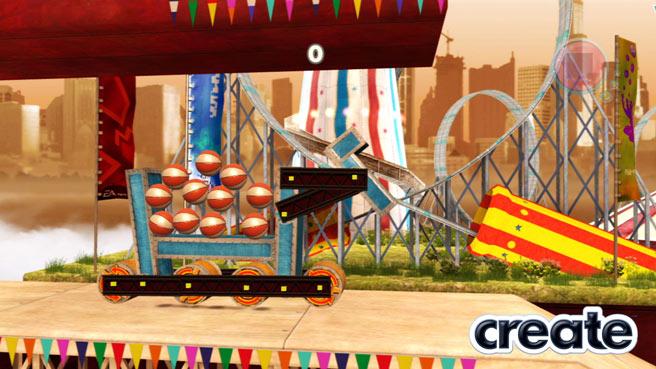 Despite my fondness for the idea behind titles such as The Incredible Machine and Crazy Machines, they both could use a retooling so that they appeal to a new generation. Create had a chance, however slim, to fill that gap. Instead, it feels as if I’ve been given a small playroom with a toy chest filled to the brim with nothing but toys I’ve seen elsewhere. The game boasts about how the player is able to build amazing contraptions, environments, and inventive solutions, but during my time with the title, I found that the substance is hardly as creative or ingenious as the developers seemed to think it was.

As The Incredible Machine before it, Create tasks players with devising complex solutions for simple problems. Sending an object through a hoop, helping a racecar across the finish line, pushing a floating balloon to a designated spot—most challenges are straightforward, but the solutions rarely are. Players arrange and place different blocks and gadgets (determined by the mission) to complete the task, while also keeping in mind any bonus tasks like using fewer pieces or achieving a higher score.

It’s true that the game allows for different solutions within the puzzles’ parameters, but many also force you to do it using only certain pieces. Done well, this could add more strategy to a fairly simple challenge, but more often than not, it’s clear that a specific arrangement was meant to be used. Any solution devised by the player will inevitably be complex and almost impossible to replicate–like mine often were. 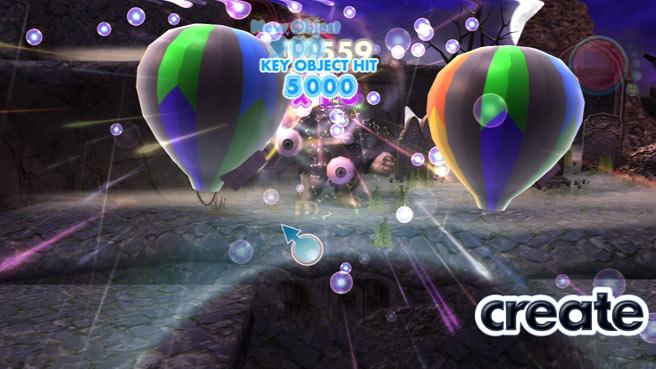 I constantly felt as if I had to work against the game by bending the rules and trying something a bit more inventive than Create wanted to allow. There are all of the basic pieces (balls, vehicles, fans, balloons, ramps, rockets, etc…), but other than the few themed pieces earned throughout the game, many of the items are just copies of others. Soccer ball/basketball, motorcycle/dirt bike, van/truck—I don’t need two different types of the same thing. I’m supposed to be solving puzzles, not decorating pretty little environments.

Not that there are any, since the title’s aesthetic style ranges from barely passable to more generic than any metaphor I could ever come up with. Fireworks and sparkles are substituted for personality, and while the frame-rate holds solid despite how much action appears on-screen, there was rarely any flair or charm put into the designs. Stages are bland and the missions tend to be even more so, items are predictable, and although the central theme, creativity, stays cohesive throughout, it still feels like little more than an excuse to mash a dozen or so random stages together.

By trying to cater to a new audience, the original reason for this sub-genre’s existence was forgotten. The joy of watching a contraption come to life is here, but it feels significantly cheapened by the lack of options. The free play mode is alright; it’s not broken and after completing a few worlds the pieces will be overflowing from the menu. 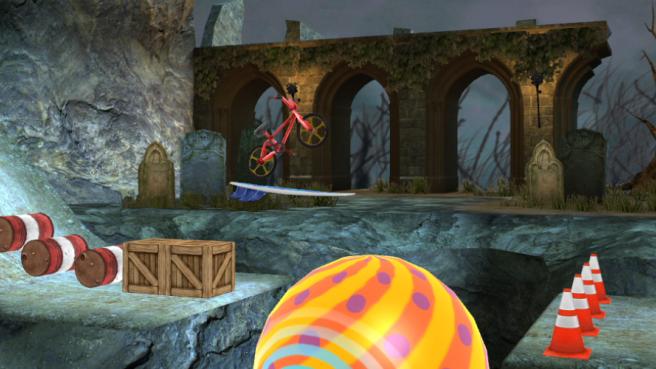 Unfortunately, said menu interface also happens to be one of the title’s largest flaws. Rather predictably, interacting with the world can be frustrating due to its menu-heavy system to get around the lack of buttons and mouse support. Create uses a radial menu system, which I think most kids will be able to pick up quickly, but it also has too many sub-menus for things that should be easy to find. It took me a few minutes to figure out how to exit the stage, and I’m embarrassed to mention how long to took me to figure out how to properly use the menu system.

Thankfully for younger players (and quite possibly everyone else who plays this game), there are plenty of useful tips and tutorials spread throughout the game. Help is never more than a button press away, as whenever the player is stuck, the bottom right of the screen will remind the player that any relevant information can be accessed through the help section (RB for the Xbox 360).

Although I hate ending a review in this manner, once again, I feel a bit conflicted. I’m truly happy to see another game in the vein of The Incredible Machine, but I also wanted to see a game that was able to innovate and expand the original concept; Create doesn’t do that. What EA Bright Light did is slap a disturbingly bright coat of paint on someone else’s idea and call it new and unique. It’s not so much wrong as it is disappointing, but then again, that seems to sum up all of Create. Disappointing.

Those who remember the titles mentioned before will be unhappy with the lack of options and overall simplicity of the title, and younger players will no doubt be frustrated by the many shortcomings and overall complexity level. Few are going to be satisfied with this title, and most of the people who do will probably be in denial, crying while telling themselves that this is just like The Incredible Machine.