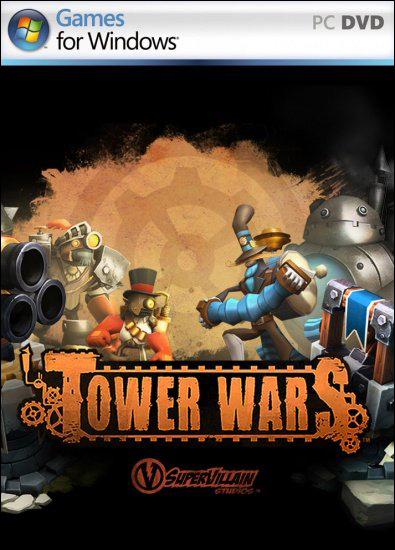 Thank you Super Villain Studios for sending us this game to review!

At this point in time, the tower defense genre is, well, over-saturated. With countless tower defense games that plague the iOS and Android Market, there is a lack of pure-skilled ones that can be ranked alongside other popular strategy games like Civilization and Starcraft. To me, it feels like Tower Wars can be placed very high on that list, and can be labeled as a game that is easy to learn, but hard to master. Tower Wars truly stands out from the others when it comes to this genre.

From the way the game is structured, you are meant to compete in an online setting with up to 6 other players. Depending on how many friends you have and what your preference is, you have the choice to play either 1v1, 2v2 or 3v3. There is a point ranking system in place, where you begin with 1000 points. Depending on how many games you've won or lost, you will either gain or lose points. You can play together with friends or join up with random people in the matchmaking mode. You can also host your own unranked server, where you and your friends can test out different strategies and battle.

The gameplay is very simple, yet there is a lot of depth to it. There are two sides for each faction (Red and Blue) and two roads that are exactly alike. One is used for attacking the enemy base, and the other is used for defending against the attacker. Some of the road is very linear, but the majority of the road is large and uses a hexagon shaped grid. You can lay down your towers in a specific way to create a path that your enemy will be forced to go through. A lot of strategy goes into building the towers, so you better be sure that the road that you are creating is long and powerful enough to lag your enemy units behind. Along with that, there is an upgrade system for your towers that can give them more strength and range. The highest level possible for the towers is level 3, and it can be very pricey. 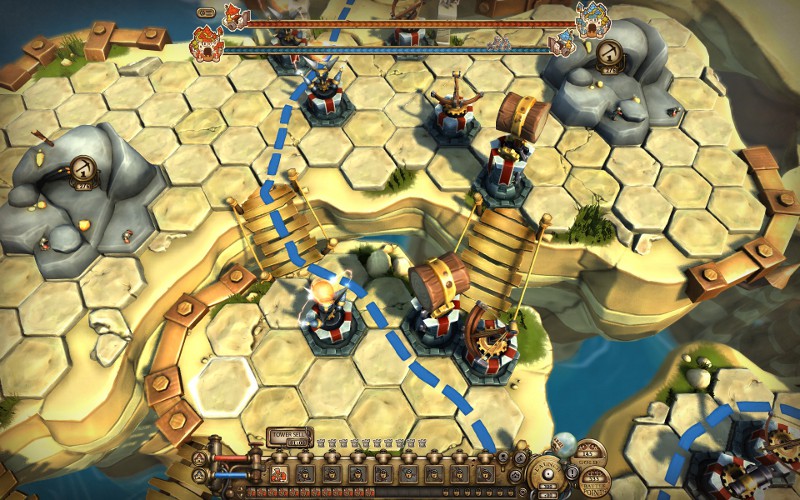 Strong Points: Easy to play but hard to master; Enjoyable setting and music.
Weak Points: Soundtrack is slightly annoying after a while; Lack of a campaign mode.
Moral Warnings: Violence and minor curse words.

To gather resources, you need to upgrade the mines that are placed on the field. The mines help regenerate your gold much faster depending on how much you invest in them. There is another set of currency named Battle Points. You can only get these points by sending enemies out to attack your opponent's base, and the points you gather are used to upgrade your units. There are several different units to choose from, and a deep, non-linear system that gives you the choice for which units you want to purchase and upgrade first. Every unit has a specific trait that helps it shine when compared to its counterparts.  To give an example, some may be strong in armor and shields but are very slow, and others may be strong in attack and speed but are very easy to take down.

If you happen to not have any friends who own this game, or simply feel like you're not experienced enough to play online, there is a classic tower defense mode. It is your standard tower defense mode, where the AI sends multiple enemies each wave to try to penetrate your defense and destroy your base. Along with that, there is also a tutorial mode for beginners that I found to be very helpful. From the perspective of a casual gamer, you can easily get hooked on this game just by playing through the simple tutorial. The tutorial does a very good job of explaining the basics of the game, and it took me around 5 minutes to get the hang of it.

The soundtrack is enjoyable, but may be slightly annoying after a few gameplay sessions. It really fits well with the graphical style of the game, and really helps give off this happy mood when you begin playing. From my experience, I found that the music was quite loud when I first start playing the game, and I quickly lowered the volume down by 50%. Along with that, the sounds that are used for the units is very enjoyable to listen to. Also, The voice acting is done well, and just like the music, it fits in with the environment. 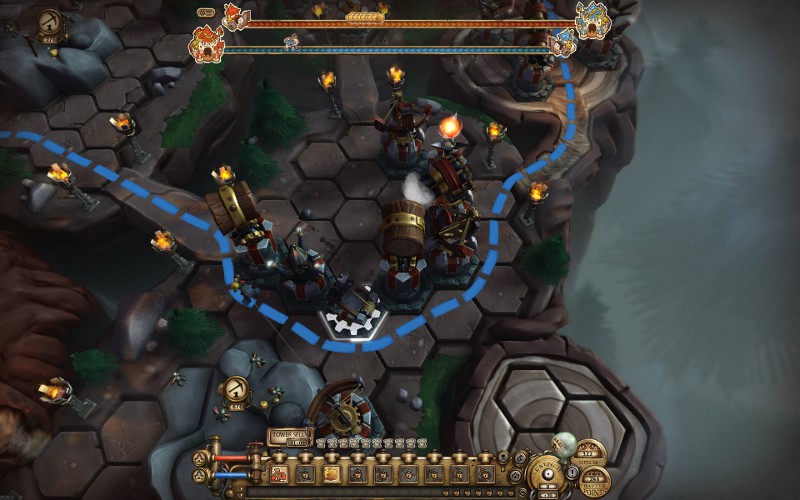 I really enjoyed the visuals, and along with the sound and music, I felt like they fit perfectly together. The graphics are very colourful and help bring the game to life. When I first began playing, it really helped me get attached to the game much quicker than any other tower defense game that I've ever played. The animations are decent as well, and quite impressive.

Minor curse words are to be heard when playing the game, but nothing major that would give me a surprise. The majority of the bad words can be heard in the tutorial, and doesn't really get any worse than the D word. I have also noticed that there is (what looks to be) blood coming out of the units when they get hit with the bullets/arrows that get shot out of the towers. Although, it may just be oil grease, which helps fit in with the setting of the game. Of course, you will see a lot of weapons in this game and there is minor violence to be had, but I feel like this game is fine to play around children. Be warned as well that since there is an online mode, you will most likely be exposed to a lot of cursing. I definitely recommend playing with your friends if this bothers you.

My experience with Tower Wars was very delightful. I really enjoyed the music and the setting in this game. The strategy and depth in the gameplay has me wanting to play it very often. My only major issue with the game is the lack of a campaign mode; I think there may be many people who might be interested in knowing why Red hates Blue so much. Besides that, If you have a strong hunger for playing a more skill-based tower defense game, Tower Wars is definitely going to satisfy your hunger.