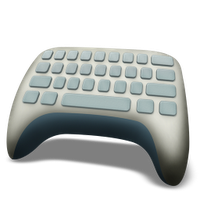 For decades, if a graphics designer or photographer wanted to use a computer, Macs were the preferred platform. The Macintosh computer has always been considered to be a powerhouse when it came to graphic applications. If you were serious about graphics, Macs were the way to go.

… in pretty much any field but one – games. Macs had a reputation for being a productivity machine. If you wanted to do serious work with graphics, you'd get a Mac. If you just want to play games, get — or build — a Windows box. It's a stigma that continues to this day. Even though Macs have always been pretty good machines when it comes to graphics, most don't regard them as serious gaming rigs, and this extends to developers as well.

Fortunately, things are changing. More independent developers are releasing their games for Macs. Some major developers have done this as well, including Blizzard (which has been one company that has always supported Macs), Valve and TellTale Games. More games are being released that are cross-platform – and even pulling Linux users into the mix as well! 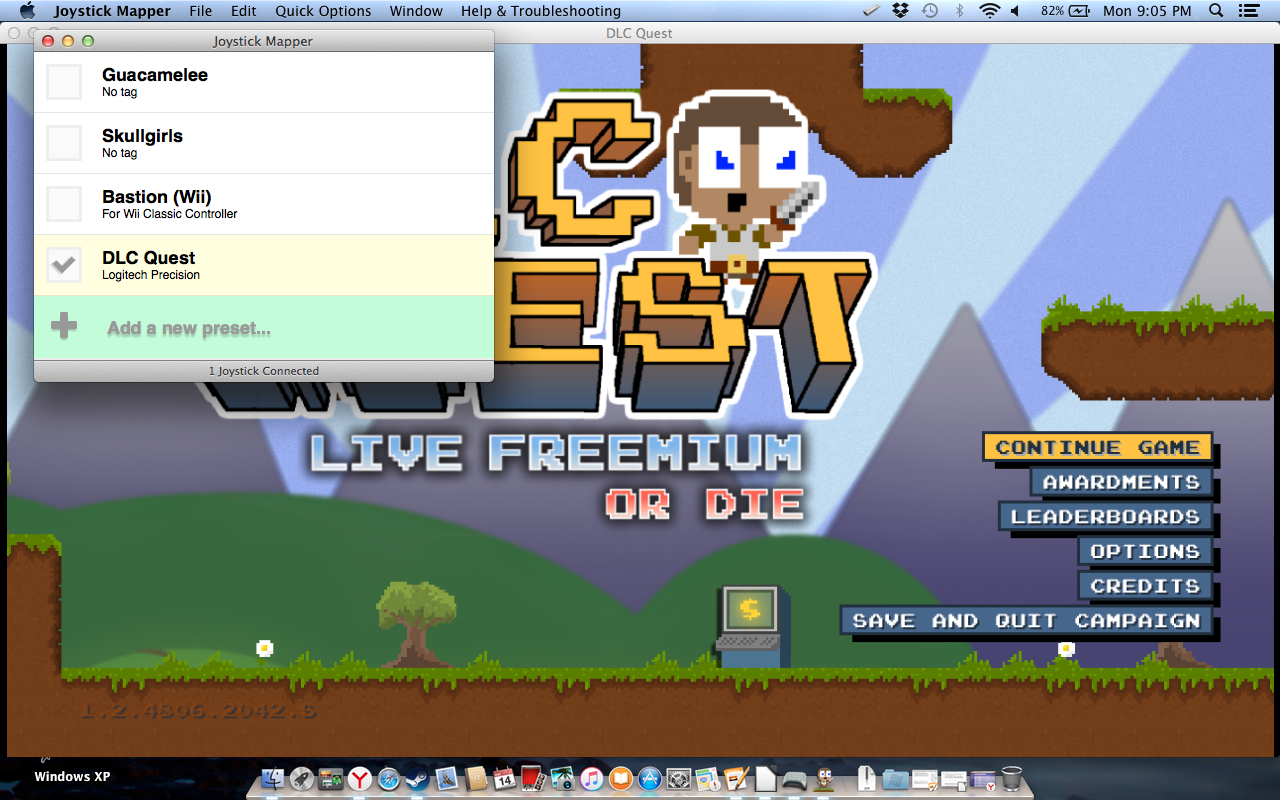 Strong Points: Allows more options to use gamepads; multiple options for key bindings
Weak Points: Some learning curve to use; additional software may be required depending on the gamepad
Moral Warnings: None!

Unfortunately, for the hardware side of the equation, things are still a bit slow. Most game pads are not designed with the Mac operating system in mind. A company called Macally used to make  a game controller, but the product is no longer available. Logitech provides some Mac support, but seldom is up-front about it, so it's sometimes a matter of trial-and-error. The same goes with controllers made for video game consoles. The Mac OS has been pretty good with PlayStation controllers, but these can be a crap shoot with any controller not made by Sony itself.

Even if you do get a controller that works for your Mac, it's not necessarily an indication that it will work for your game. I've had my Logitech controller work beautifully in games like Jamestown or Distance, but it doesn't even register a single press in games like Guacalemee or Bastion. And some games have limited or wonky functionality, like DLC Quest.  Fortunately, all of these games allow the keyboard to be used, but anyone who has tried to play a brawler like Street Fighter or Mortal Kombat with a keyboard knows how laughable that attempt can be. Just because a game can be played on a Mac doesn't automatically make that game playable, as it were.

Fortunately, there are a few alternatives that can be used. One such alternative is Joystick Mapper by Rodrigo Rocha. This simple application allows you to take your controller and bind keyboard keys to buttons on the controller. So, for instance, if you want to have the lower right shoulder trigger act as if you've pressed the "d" key, it's a simple matter to scan for the button by holding down that button until Joystick Mapper recognizes it, and then tell it to act as if the "d" key is pressed. It can be a bit complicated at first, as the buttons that the program reads may have a different designation than that which appears on the controller itself. This can be worked out with some experimentation, though. 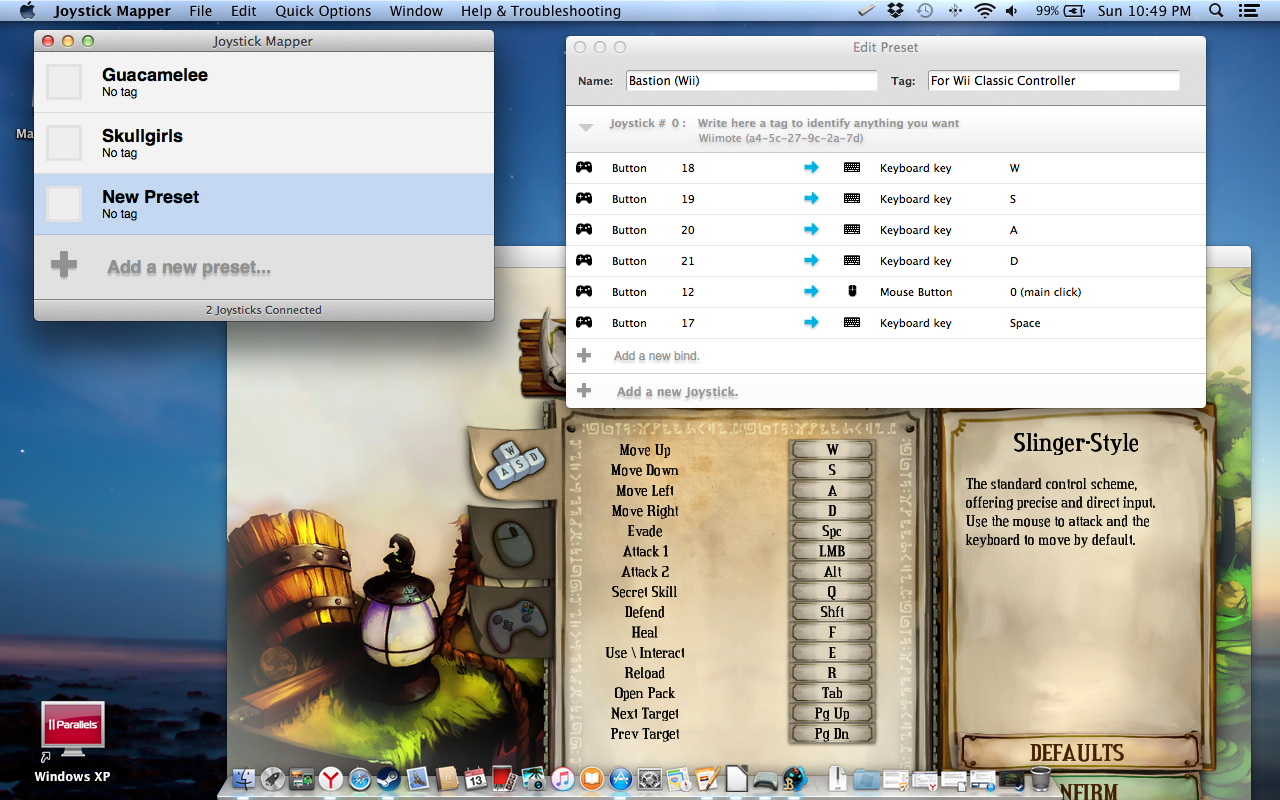 For best results, you should create a different category for each game you play. Then, when you know what game you want to play, click the check box when you've started the program, and the game will be played as normal. Joystick Mapper can remember hundreds of different presets, even with different controllers. You can only have one preset active at a time, but it is possible to have multiple controllers set up within one preset, so multiple players can use different controllers.

However, this is still a bit wonky. For example, I tried to set up a two-controller set-up for Skullgirls when I was working on this review. I had previously set it up with my Logitech controller. When I had my Wii Classic Controller connected to my computer via Bluetooth, it imported my settings for my Logitech controller onto it. Needless to say, the "0" button on the Wii controller was not the same as on the Logitech, and all of the other buttons needed to be remapped as well.

Altogether, the program does what it intends very well. But it has its limitations, as well as a bit of a learning curve to use effectively. But for those Mac gamers with few options for game controllers, Joystick Mapper is a good program to expand their functionality and play more games.