Thank You Momiji Studios for providing us with a review code!

As with most role-playing games inspired by swords and sorcery, there are kingdoms, a hero, an evil villain, and a princess that needs saving. The princess of Castleton gets kidnapped and it’s up to the hero to save her. Except this time around, the princess is tired of being kidnapped and waiting around for a hero to save her. So instead, she sneaks out of her imprisonment and heads back to her home. Unbeknownst to everyone, this throws the entire script out of wack. Suddenly the chosen hero is now the villain, the forsaken princess of another kingdom captures both the good and evil king in her plot of revenge, and it’s up to a very unlikely trio to save them all.

Aru, Nate, and Tator join forces in Video Game Fables to save the world. Why they are an unlikely trio is that Aru is the princess that is supposed to be held captive, Nate is just a merchant non-player character, and Tator is the evil prince of the Gator Kingdom. Video Game Fables is very well aware that it takes place in a video game and uses this awareness for our main cast’s personalities. Aru has little patience for basically anything and tends to want to rush along the plot. Nate is so extremely excited about being the hero that he thrusts himself into action any chance he gets. Tator, despite being the son of one of the evil kings, is meek and timid. In general, Video Game Fables has a silly tone similar to other RPG series like Paper Mario and Disgaea. The majority of the humor plays on common tropes in RPGs and subverts them, leading to many chuckle-worthy moments. The music in Video Game Fables is lighthearted and chiptune-based, matching the not-too-serious and retro-esque tone that oozes out nearly every moment. A lot of the music I ended up remembering even hours after I stopped playing.

Video Game Fables uses a turn-based format for combat but tends to mix things up, while streamlining some of the traditional conventions. No more will you miss hitting an enemy five times in a row nor will you have to juggle mana or MP for your special abilities. Aru, Nate, and Tator are the only characters that can be played, but none of the characters are confined to specific roles. They all have a variety of attacks and status buffs/debuffs in which all of them can play any role you choose for them. If you want Aru to be the aggressive attacker then slap on a battle axe and have her batter her enemies with her throne. If you want Nate the “hero” to focus on buffing characters and debuffing enemies, give him a bow. A lot of these playstyles are supported in the eight weapons that can be chosen that affect various conditions such as increased physical damage, decreased turn order, or increased critical rate. While I did keep all of my characters on a flex role so that they could switch between offense and defense in a pinch, you’ll quickly find the playstyle you’re comfortable with and may just have two characters focus on sustaining one character or have all of them play an aggressive offense. 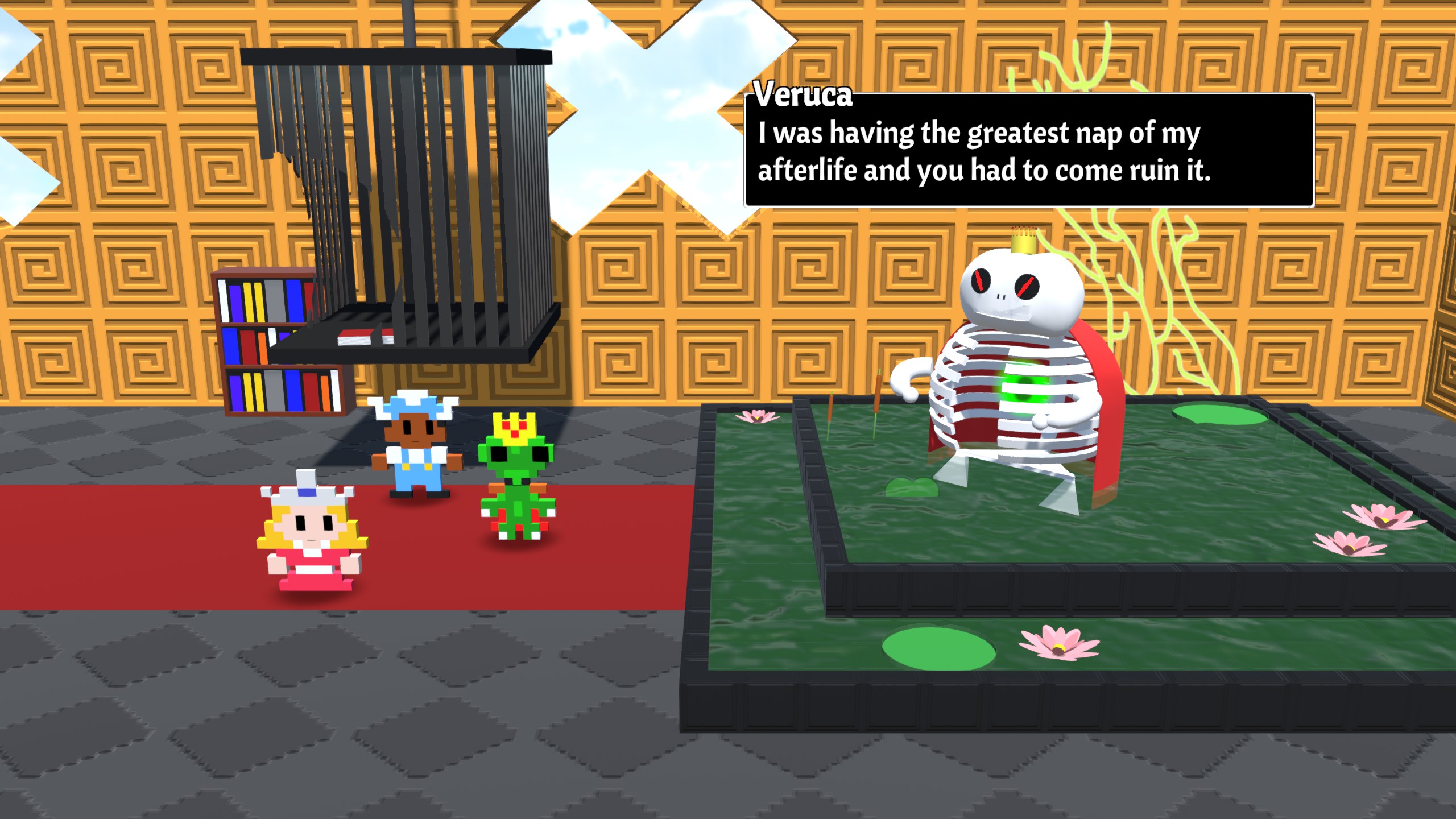 Critical hits play a very different role in Video Game Fables. They have a very high 40% chance of happening with basic attacks, but critical hits are needed to access your most powerful damaging attacks, or they can be used to increase the potency of your buffs/debuffs. Critical hits are stored in stacks of one or two depending on the weapon equipped.

Turn order is also played in an interesting way. There are acting turns where moves are chosen, action turns when the move is executed, and recovery turns before they can act again. Unlike most RPGs, you can delay your turns so they act later than they normally would. While this simply seems like it wouldn’t amount to much, plenty of boss battles rely on delaying your turns. Also, everything I mentioned above—from critical hits, to turn order, to buffs and debuffs—also applies to the enemies as well.

Unlike other RPGs, experience is party wide and not only affects levels but equip load as well. It’s not as complicated as it sounds because you can increase or decrease your level whenever you want to allocate to skills and skill slots and level increases only provide minimum stat buffs, mostly acting as a prerequisite to equipping specific weapons. It does allow the player to play to their liking so if encounters are too easy, the party level can decrease a bit for more of a challenge. As long as you fight most enemies in the game, you should gather enough EXP to be comfortable. Whether you use a keyboard or gamepad, either method works well. Keyboard has the option of controlling most menus and combat with one hand, while gamepad might just be more familiar and accurate in a 3D space.

Overworld navigation can be somewhat slow in the beginning. Fortunately, there are many teleport points, and each of these leads back to Castleton so you can quickly learn new skills, rest to replenish HP, or obtain new weapons. Once unlocked navigation does get a bit less tedious, thankfully. In the overworld, you can also do various other things such as fish and mine for ores. The former can act as an alternative or addition to mining as you can trade fish with an NPC to obtain more ore. While there are no random encounters, enemies seen as purple or orange blobs spawn in the overworld and in the dungeons. While you are ever so slightly faster than these blobs, Video Game Fables doesn’t force battles on you which is nice.

Boss battles are what I found to be the most interesting and enjoyable aspect of Video Game Fables as not one boss plays out the same and they all have very interesting gimmicks that play around with the turn-based format. Some bosses even implement real-time elements keeping you on your toes while you’re choosing your moves. If you’re familiar with turn-based RPGs, Video Game Fables can be on the easier side. There are still moments that will catch even veterans off guard. 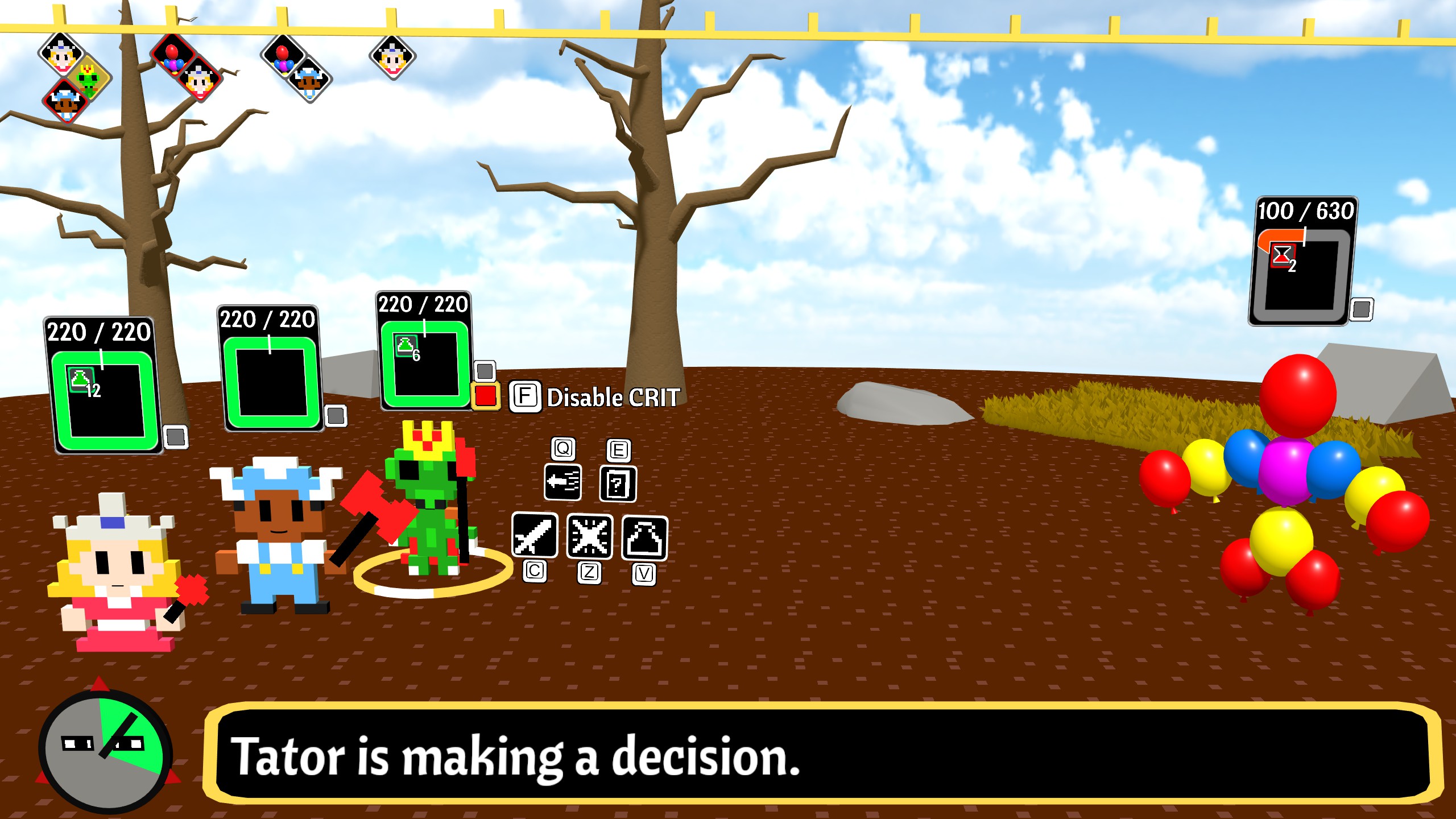 Utilizing a mix of voxels, pixels, and 3D models, the visual aspect of Video Game Fables is curious, to say the least. While it isn’t graphically impressive and the constant mixture of styles does make the setting feel incoherent, it is for the most part visually clear and the characters are surprisingly expressive. However, there are some moments in dungeons where the camera is too close to the characters, leading to janky navigation and platforming a few times. While puzzles aren’t overly complicated, they will utilize a bit of brain power (or screen capturing) to overcome.

I did come across one strange bug while first starting up the game. After the splash screen showed the Momiji Studios name and Unity engine, the game would crash, showing an ever-spinning mouse cursor and forcing me to restart my computer via the start menu on the keyboard. I did find out that it was caused by my two-monitor setup, but I couldn't find out the exact reason as to why. It also seemed to affect only me as I discussed this with the developer and he said that he and a few others who played the game had two or three-monitor setups and they never ran into it. If you happen to run into this issue, disabling your secondary monitor will fix this. I was unable to replicate this strange oddity when booting up the game all other times. (I won't take off any points for this as it only seems to be an issue with my specs.)

As it is an RPG, Video Game Fables has RPG-styled violence. Choosing moves and seeing them in action, you’ll hit enemies with swords, bows, frying pans, and the crushing disappointment of your dad’s expectations. Magic is contained to fairytale magic and dark magic such as sorcery, buffing characters with the dark arts, or smiting enemies with lighting bolts from the heavens. There is even a witch in Castleton who claims she is a chef and not a witch. Most enemies are fantasy or outright bizarre in nature, but two enemies are an undead tadpole skeleton and an undead king.

As evident in the price range, don’t expect Video Game Fables to be a long adventure as it only took me about 10 and a half hours to beat, and the only things left after the credits are to earn the rest of the achievements. It may have low replay value compared to its brethren, but the methods Momiji Studios used are refreshing. This is an RPG that is well worth playing due to its combination of poking fun at RPG tropes and an enjoyable battle system with even more enjoyable bosses. Even the few serious moments are played out straight without awkwardly injecting some unnecessary and groan-worthy humor. Morally, it’s pretty mild so it can even be seen as a nice introduction to the genre. This was all majority created by one person too and that in itself is impressive, and the developer shows this through a good understanding of the role-playing genre.