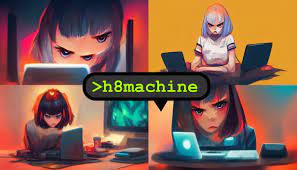 Thank you gaem by jj for sending us this game to review!

In a world where the internet has long been taken over by bots, a human takes it upon themself to reclaim the online space. The player is that human in h8machine, a card-based game set on emulating the Internet. The user fights against bots using a deck they form using various “personalities” (sets of four cards that are themed based on how it shapes user interactions). Each bot has a different personality as well, and all personalities, both player and bot, are based on Internet stereotypes.

There is a tutorial level where the player can learn the ropes of the game. I had to play it a couple of times to get the gist of it, but all of the material needed is included in one playthrough. The user can redo the tutorial as many times as they need; it’s a button on the main menu. h8machine walks the player through each and every aspect of play, making sure they understand every nuance before moving on. It’s a very fail-safe environment where the user can explore and learn the best strategies for themself. Even the enemy bot is trying to help. 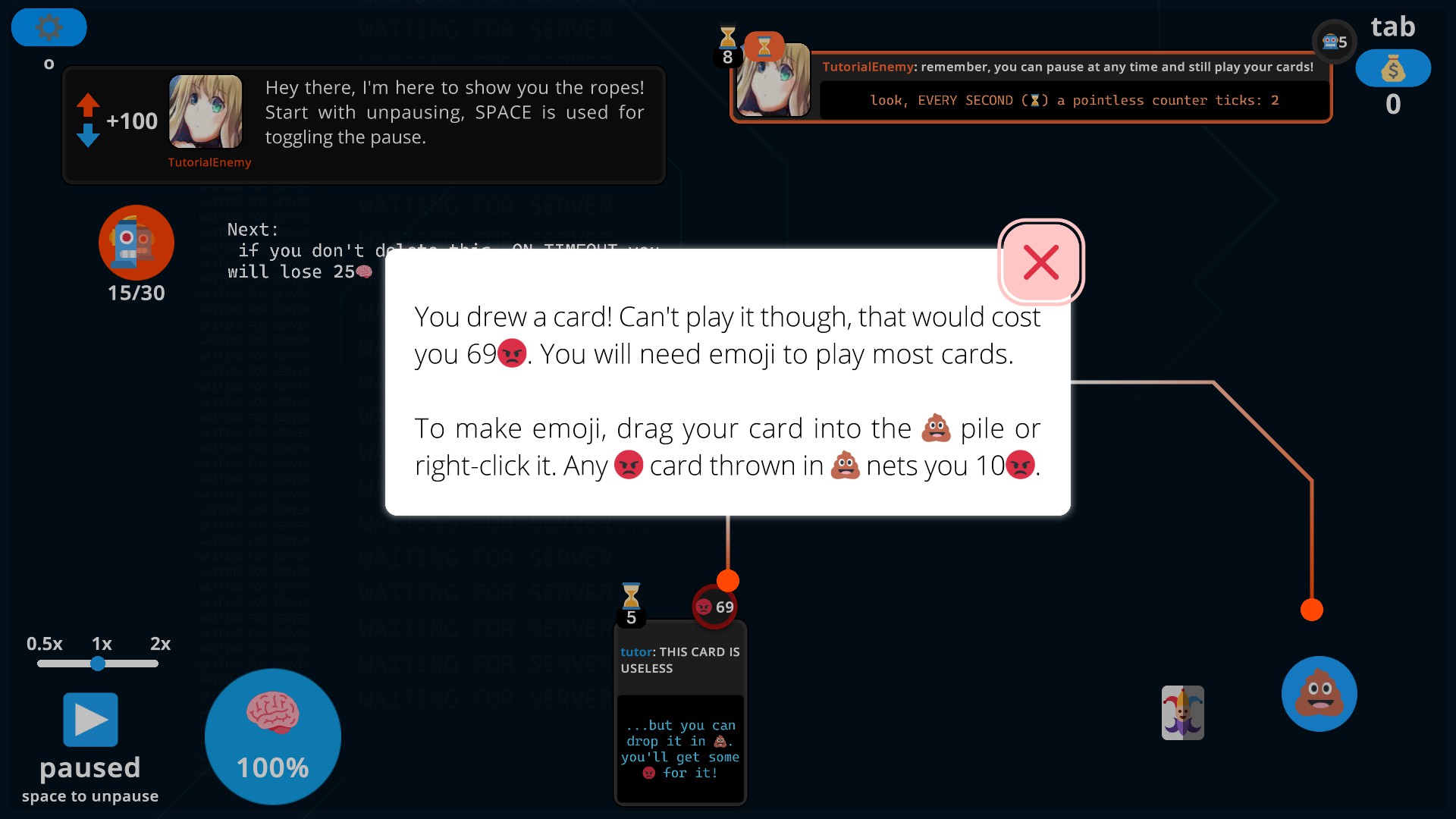 Strong Points: Emulates the Internet very accurately; utilizes real-time with pause so the player can pause the play if need be; excellent taste in memey music; very engaging and fun; regularly updated (as of the writing time)
Weak Points: Very difficult, though this is typically overshadowed by how much fun the player is having (I was unable to get even close to the final boss)
Moral Warnings: Every swear word in the book; tons of unflattering Internet stereotypes; the whole point of the game is to be a bad example

However, once the player enters the real game, all knives are out. Every enemy post is an act of malice. Some will take away brains (which is the health bar of the player) and others will count up counters that will do damage later. The user deals cards that are intended to lower the internet points of the enemy. The internet points are their health bar. Some cards restore health, some deal damage, and others are intended to boost the effects of other cards (because sometimes they only work when they have a reply or when the user plays a card).

Other nifty features of h8machine include the ability to unlock all gamemodes and to reset progress. (Steam maintains the progress of all achievements that the player has earned.) There are the actual, official gamemodes, which are roguelike and constructed. Roguelike is basically the story mode, where the player starts out with a couple of personalities, and they acquire more as they advance through the game. When the player dies, all progress is reset and they have to start from scratch next time they play. They can change their deck if they need to before every round. Constructed mode, on the other hand, is a set of six tournaments where the player chooses their deck from all available personalities. However, this comes with the drawback of being unable to change the deck once it is chosen and used in the first round. The user must make do with what they have chosen.

The graphics aren’t too impressive. They don’t need to be. The most impressive thing visually is that the enemies all have various forms of mutating anime profile pictures. The controls are simple, and all complexities are resolved in the tutorial. It is worth noting that h8machine has a chance of crashing when shut down; it happened to me the first time I closed the game. 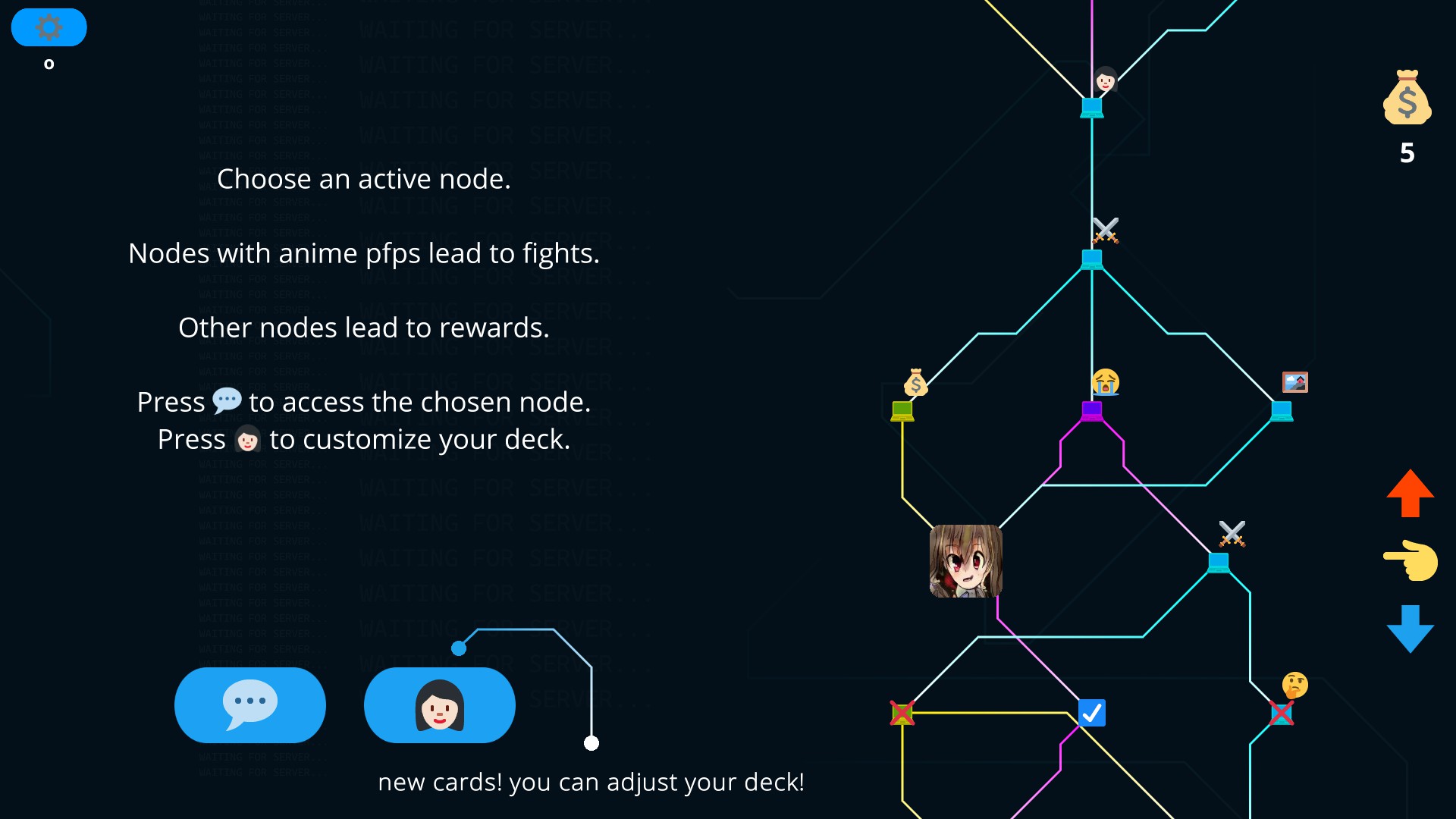 On the moral side of things, the biggest problem by far is the foul language used. h8machine has every bad word in the book. There are sometimes comments voice acted by robots once the user makes a move, and one of these comments is the F-bomb. The curse words are in the cards, the intro, and everywhere in between. The bots swear, the player swears (with cards), and it can’t be disabled. Unfortunately, this is a very accurate representation of the Internet, and should be kept away from children.

There are also tons of extremely unflattering Internet stereotypes in this game. There’s the stereotype of the Reddit moderator, there’s a caricature of Todd Howard, the creator of Skyrim, and an e-girl personality, just to name a few. It’s also worth noting that the user has to fight and troll their way through the game in order to survive, because they aren’t going to win if they play peacefully.

Overall, h8machine is a very accurate (and fun to play) representation of the Internet condensed into a virtual card game. I personally would recommend it for anyone who enjoys the good and the bad of the Internet, and for someone who wants a fun but replayable challenge. However, make sure that the person in question isn’t any younger than high school, because there is a lot in here that a child wouldn’t understand.