Thank You Dear Villagers for providing us with a review code!

Combining cards with storytelling makes for one interesting experience. Card games or games that use cards as an influence have been taking off in the indie scene—mostly with turn-based combat. So it makes perfect sense that one day a developer would try out the genre with the adventure format. Foretales, created by Alkemi, uses playing cards to tell their tale.

After a successful heist, Volepain the Shoebill and Leo the Tiger walk away with a special lyre relic. Unbeknownst to both of them, this lyre is special in nature and Volepain ends up seeing very ominous visions of the future. One prediction is the fall of the capital Isenburg. Another vision is of Volepain’s father trapped in the mines, about to be slaughtered by Lady Katell’s men. Even worse, shortly after the heist, Leo ends up arrested. Volepain is very much between a rock and a hard place as he has to make drastic decisions to prevent the least amount of disaster possible.

In Foretales, there will be numerous decisions made during every opportunity, and all decisions are influenced by cards. Levels are called missions, and you can take up to three people in each mission, with Volepain being a mandatory choice. Simply selecting missions is a conscious choice because not all missions can be played in a single playthrough. It takes a “choose your adventure/path” method with missions being locked out depending on what you choose. Sometimes, even the choices made in past missions can influence future ones.

Inside missions, the user interface is laid out similarly to a traditional board or card game. In the middle are the cards that represent the adventure and paths to take. On your bottom half, you have the cards that can be played. Left-side cards are the cards that are associated with your characters. These cards can be used to advance in the adventure, sometimes influencing the cards on the right side. Now, the right-side cards represent currency or items. There are various forms of currency such as money, food, fame/reputation, and grim/fear. These cards can sometimes be used on adventure cards in the middle or encounters with creatures. 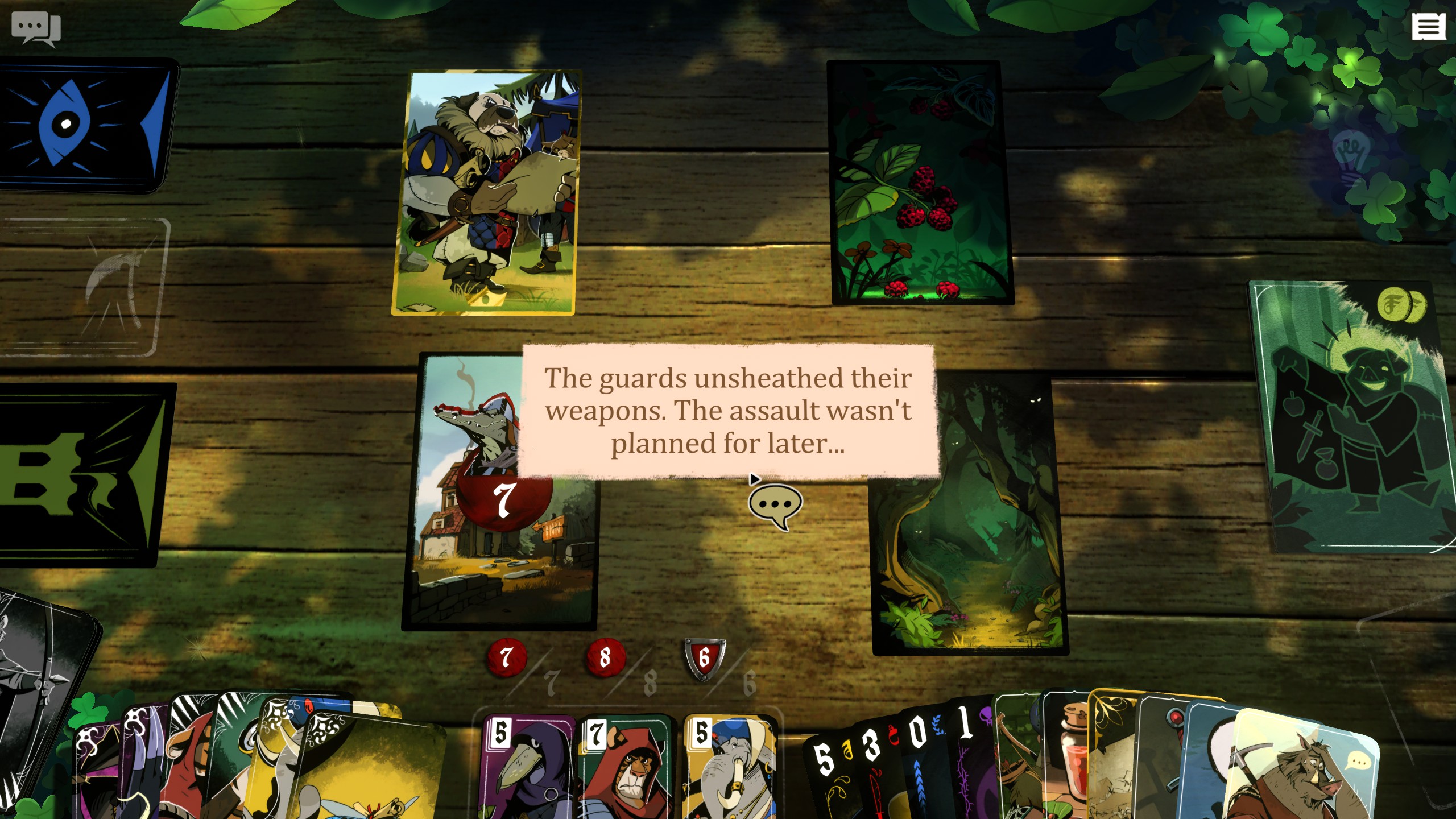 Encounters are fascinating because while you can typically avoid the majority of encounters, sometimes you will be forced to confront the forces ahead. Unlike many turn-based games, you have the option of solving matters through more diplomatic methods or fighting them through force. While the two choices are there, and you can play through the entire game in a pacifist manner, Foretales does greatly encourage non-combative conflicts. I always feel weird when a video game says you have choices, but then nudges you to make specific ones. Not only are violent methods discouraged,, they’re also harder to resource manage around if you’re feeling bloodthirsty as killing others constantly has negative effects in future missions. I found manipulating forces through threats or money to be much easier.

In these encounters, there is a number located on the right of the enemies that represent their morale. Getting enemies to surrender via bribes, threats, fame, or special character cards will lower the number depending on the enemy. If the number reaches zero, then all other enemies will flee, with any remaining rewarding you with fame. If you don’t want to do this or don’t have the resources for more “civil” methods, then you can attack them, causing the game to enter an auto battler of sorts. Cards directly across from each other attack, taking off hit points depending on their attack power or character cards used. Killing enemies adds to the graveyard and your grim/fear currency. Also, if any of your characters fall in battle at any point, it’s considered a game over for that mission. There are some enemies that you are forced to fight but aren’t penalized for killing.

Describing Foretales’ art style is a mix between Don Bluth’s art and the Disney Renaissance era, with a slightly brighter color palette. In short, it’s a beautiful game to look at. Not only are the anthropomorphic characters very pleasing to look at, but there are also subtleties within the missions that you don’t even notice at first. For example, in missions that take place in a jail, the table that the cards are played on has the shadows of jail cell bars. The forest table might be slightly green with foliage in the corners. Something like this didn’t have to be done at all, and yet it was. The artwork of the cards is greatly immersive to the point where it almost feels like you’re experiencing a Dungeons & Dragons campaign. The sound direction is also great with very solid sound direction, atmospheric music, and narration by voice actor Travis Willingham, known for a variety of notable roles. 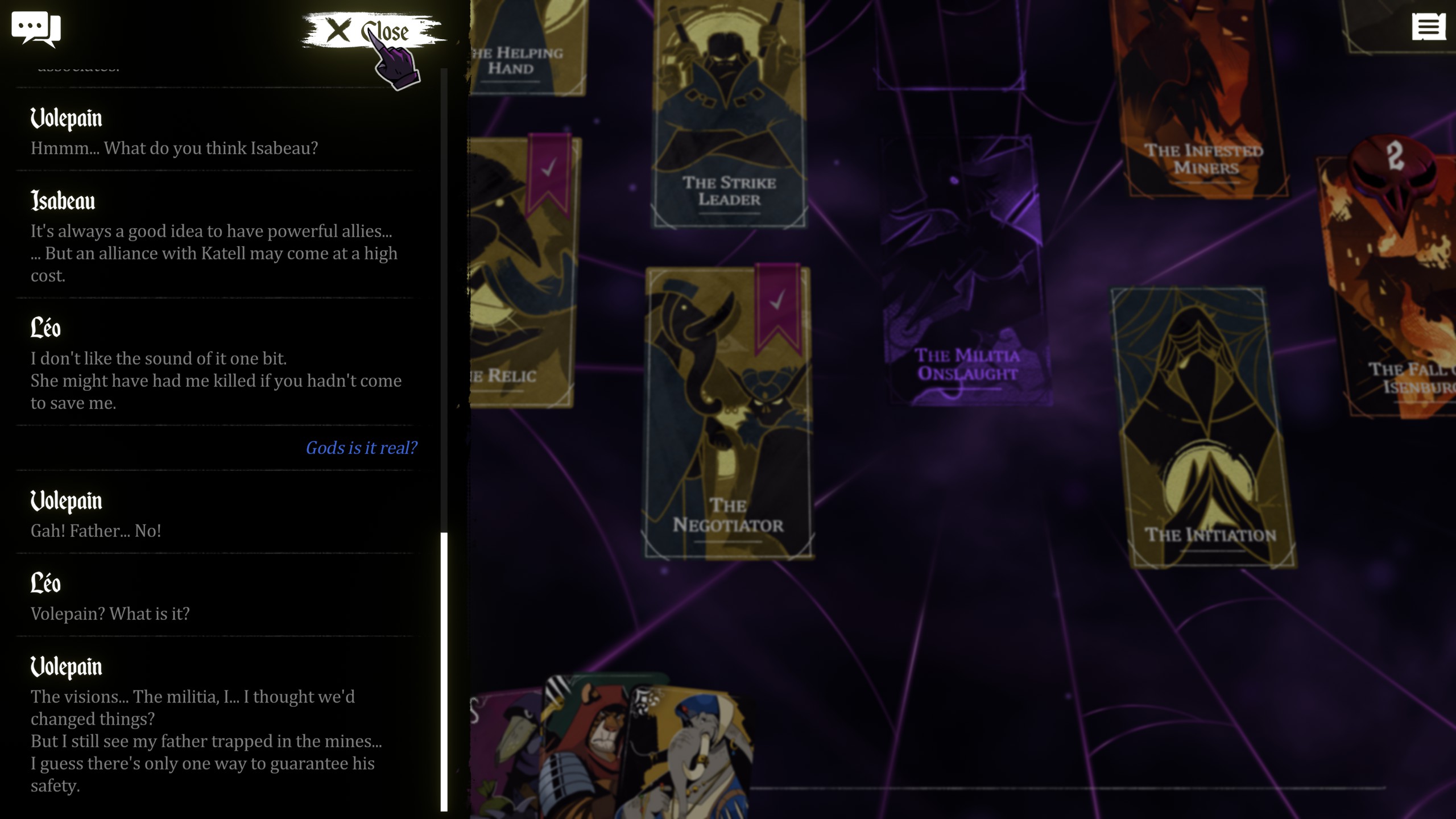 With all the choices that can be made and directions that can be taken, there are bound to be some minor narrative inconsistencies. Nothing immersion-breaking, but just small things such as characters mentioning decisions you didn’t do or them mentioning you having items that you’ve long parted with. Something like this will most likely not be fixed due to extensive rewriting in some parts, but as I said, it doesn’t kill the narrative. While Foretales is mostly stable, there are a couple of moments where the game can hang on the loading screen, leading from 10-30 minutes of lost progress as it only saves after each mission. That is a little less forgiving but is stated to be fixed in a future update.

I haven’t gone through every single path or choice made, but in terms of language, the words I encountered the most are mild ones such as “d*mn” and “b*st*rd”. Violence in itself isn’t visually graphic, but some visual effects include a blood-like slash indicating damage taken, and some artwork consisting of bruised and battered characters. (I’m assuming that is what the ESRB is referring to as mild blood.) Then there’s the whole concept of death caused by your party, even if it is discouraged. In dialogue, some characters have exclamations such as “Oh gods!” and the like, confirming that the world of Foretales is polytheistic in nature. While the usage of magic directly by characters is nearly non-existent, there does exist some creature types called “infected”, which act more or less like the quintessential zombie.

While Foretales isn’t the type of game to present a “challenge” as it focuses mainly on the narrative, and it does hold your hand quite often, it manages to be highly replayable. New game+ lets you choose other options while unlocking new choices in earlier missions. Maybe this time, you’ll get that good ending? While I probably won’t shoot for a second completed playthrough, I have high respect for Foretales and developer Alkemi. They were able to present an adventure in a unique format and accomplished what they aimed for it with little mistakes made along the way.