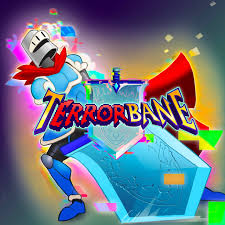 Thank You WhisperGames for providing us with a review code!

All kinds of adventure games have existed over the years. There are ones that take a serious tone. Others may have fun with the narrative and make a complete joke of it. This little one created by BitNine Studio takes a meta-narrative approach towards gaming in general—from the side of the player and the side of the developer.

tERRORbane can be somewhat tricky to describe. If you’d look at it from a glance, you’d think it’s another role-playing game inspired by classic Final Fantasy and Dragon Quest titles. Technically you’d be right, but that aspect is “Terrorbane”, the game inside of the game. Our "tERRORbane" is about a fresh developer going by Dev is excited for you to play his new game. He just wants your feedback on his product. Dev tends to have an inflated ego because he believes his game is truly the best game ever. You have other plans, as from the very beginning the game crashes. So you revamp his “feature list” and turn it into a “bug list”, pointing out all the glitches, bugs, and flaws within the product. Now what Terrorbane is about is a typical fantasy RPG story about a goddess being captured by the evil wizard Xonder. Terrorbane is the titular chosen one destined to save the land.

The whole thing with tERRORbane is discovering the bugs and glitches within the game of the game. The choices start from the very beginning as the Dev has you watch the intro title screen and can get into wildly different scenarios. There are a lot of comedic aspects to tERRORbane; if you simply try to skip the intro cutscene, Dev freaks out and demands that you watch it. He’ll even disable the skip option if you use it enough times. Tons of funny moments happen between Player and Dev as they tend to disagree on a lot of things. Dev wants you to play through his game like normal while simultaneously praising him, but Player is set on showing how broken Terrorbane is. Plenty of humor is also based on the fact that every character is aware that they are in a video game. Their dialogue tends to point out aspects of video games, or the odd actions they are doing. Plenty of references across the history of video games is inserted into this product. People who play a lot of genres will get a kick out of the numerous references inserted. Some are very obvious and take center stage, while others are more subtle and held within the background. 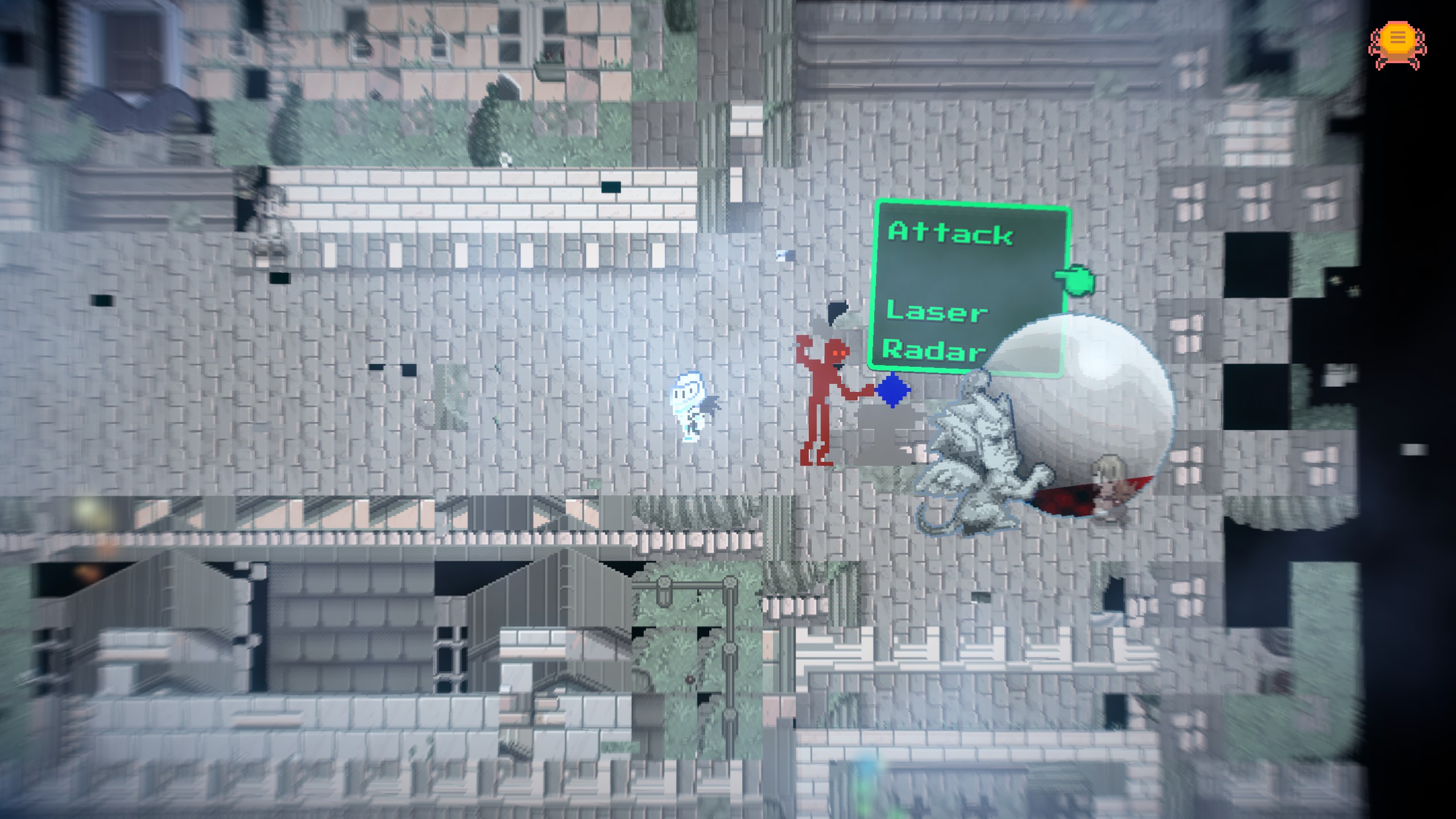 Strong Points: Good sprite work; tons of references across a half-century of gaming; explores the relationship between player and developer
Weak Points: Finding most of the bugs is necessary to unlock the true ending, which can be tedious
Moral Warnings: Fantasy violence in the style of role-playing games; fantasy world with gods, goddesses, vampires and skeletons; mild language such as “d*mn”

tERRORbane has an interesting control scheme as it mostly controls like a standard 2D role-playing game. There are some differences in that you’ll have access to the bug list at any point throughout. Other moments have the game control in different ways, such as Warioware-style minigames halfway through that have you fufill quick objectives via button prompts. One strange aspect is that controller prompts will take priority if a controller is plugged in. The only way to see keyboard prompts is to unplug all controllers from your PC. Slightly annoying considering that most modern video games will swap between the two instantly depending on what is pressed.

Although it has the looks of any (J)RPG, and is a parody/satire of said genre, this is first and foremost an adventure game with puzzle elements. Although the experience will reach a similar conclusion, the methods of getting there will vary greatly. tERRORbane will have you think like a bug tester and exploit glitches as something simple as acquiring the water elemental stone will tear the town apart to an unplayable state, forcing Dev to quickly implement a text adventure to move forward in progress. You may be granted a hook later on and you’ll use said hook to rip apart assets and place them somewhere else. Fighting Xondor can even happen in two drastically different methods that are pretty unexpected.

The relationship between Player and Dev is very interesting, as even though there is a lot of comedy throughout, it does take moments to slow down and explore the relationship. Dev gives his insight on being a developer and how expectations of both a developer and a player can sometimes be met or not. These moments can lead to tension, but not just from inside Terrorbane (or tERRORbane). I happened to relate to some of these more touching moments from the perspective of a reviewer as I had my share of positive and negative feedback from developers.

TERRORbane utilizes sprite work, and it isn’t just limited to a certain bit. TERRORbane uses all kinds of sprites for its world as there are simple 8-bit sprites and detailed pixel art with a bright and wonderful color palette. The “glitches” are also used appropriately as when the setting starts breaking apart, the distorted graphics add a uniqueness to the visuals. It doesn’t end there either. As the character Terrorbane is also one of the first sprites Dev created, it’s also the most visually glitchy. Sometimes the color of the character will change. Other times, the torso will disappear or the head sprite might be flipped upside down. It’s cute, funny, and flavorful. 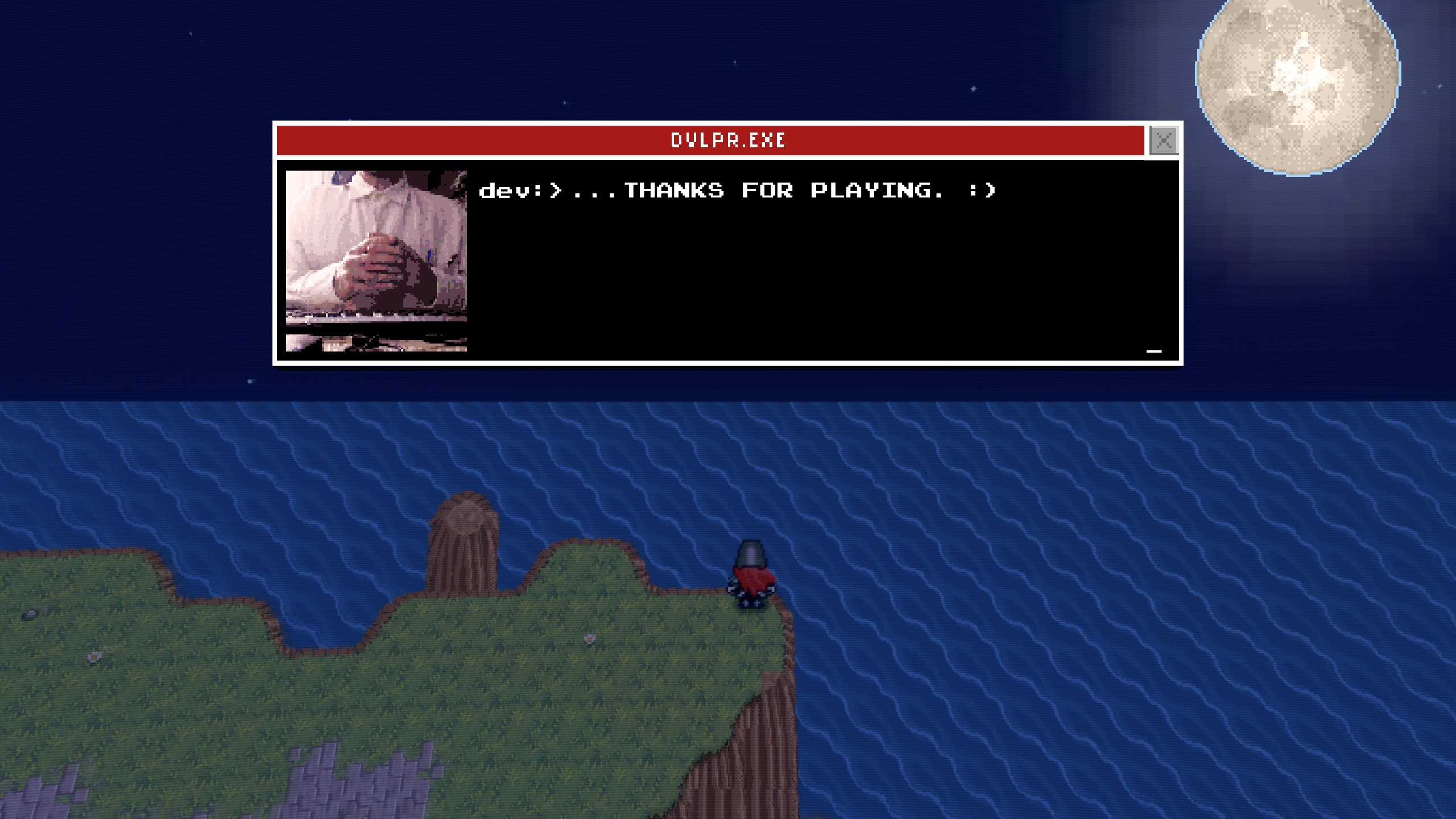 Reaching the "end" of Terrorbane will take somewhere around two hours, but the experience isn’t over when those credits roll. That is only getting to the normal ending. The main goal is to reach the true endings that are only accessible by getting every area to a broken state. That can only be achieved by reaching the target “bug count” in each area. The true endings will take a significantly longer time to reach (it took me around 11 hours), but this is where my main problem with tERRORbane happens. After the credits, you’ll gain access to the warp zone which will teleport you to the start of any section. TERRORbane expects you to play through these situations multiple times, and after a while, you’re experiencing less of a “story” and more of a “bughunt”. I get that’s the point, but all of these warp points start from the beginning of the section, and many bugs can be found late in said section. You’ll be repeating these moments often usually with the same joke or jokes over and over again. The most egregious example is the middle section titled Reboot. It’s the longest section of tERRORbane. The fact that you can’t even get most bugs in a section without playing multiple times makes repeating it all the more annoying, as there are choices to be made that lead to specific bugs. Fortunately, there is some variety in obtaining bugs so as long as you think like an exploiter, you can reach the target mark. However, finding some bugs are just ridiculous and you’ll most likely need a guide if you try to reach 100%.

Getting into moral warnings, a lot of things are fairly surface-level, like a cultist group played purely for laughs. As it is styled to an RPG, tERRORbane contains RPG-like violence. There are fantasy creatures such as goblins, slimes, vampires, and skeleton creatures. Some of the female sprites do show a bit of cleavage. Language consists of the usage of “d*mn” throughout. Although a casino can be entered halfway through a path, the player is unable to play any of the gambling games inside.

Beneath all of the silliness, tERRORbane does have something to say. As a player, it’s easy to villainize a developer or group of developers for making a buggy, broken game. Especially if they retaliate in a hostile manner. Sometimes the player can be too harsh and the line between bashing a game and giving out constructive (although blunt) criticism can blend easily. In other aspects, a developer can also be very full of themselves and truly believe that what they made is a flawless masterpiece and everyone else is wrong. But both the developer and the player (and sometimes the reviewer) make up two halves of the whole piece and it can be easy to forget that. Morally, it never goes too crazy as the experience focuses on the comedy and its overarching message. tERRORbane explores the relationship between the two forces and does it well, making for both a funny and heartfelt adventure.