Thank you Tero Lunkka for submitting this game through our Steam Curator!

Turns out Lawnmower Game is part of a series going into a variety of genres including racing, vehicular combat, and surprisingly, lawnmowing. The eighth game in the series takes a bold approach—where no lawnmower has gone before. Titled Lawnmower Game: Space Fight, this entry goes into space; as to why, for your guess is as good as mine.

Space Fight is both a rail shooter and a shoot ‘em up. You’ll take your ride-on lawnmower across five stages, some on-rails until you reach your destination and others in free flight, where an objective must be met such as destroying all enemies. Across the stages, you’ll shoot fireballs or lasers, and can charge them up to fire a homing shot. Your lasers/fireballs can be upgraded to a stronger form with picking up dropped power-ups from defeated enemies. Enemies come in groups and fire upon you a lot. You can do things like somersaults, barrel rolls and u-turns in free flight to dodge shots. Your flying grasscutter also has the ability to brake and boost, with a gauge determining when you can do either action. Like most flight-based games, this one defaults to inverted controls but the option to switch it to standard controls exist within the settings. The lawnmower has a shield and health gauge with shields recharging over time and health replenished with rings that spawn from defeated enemies. 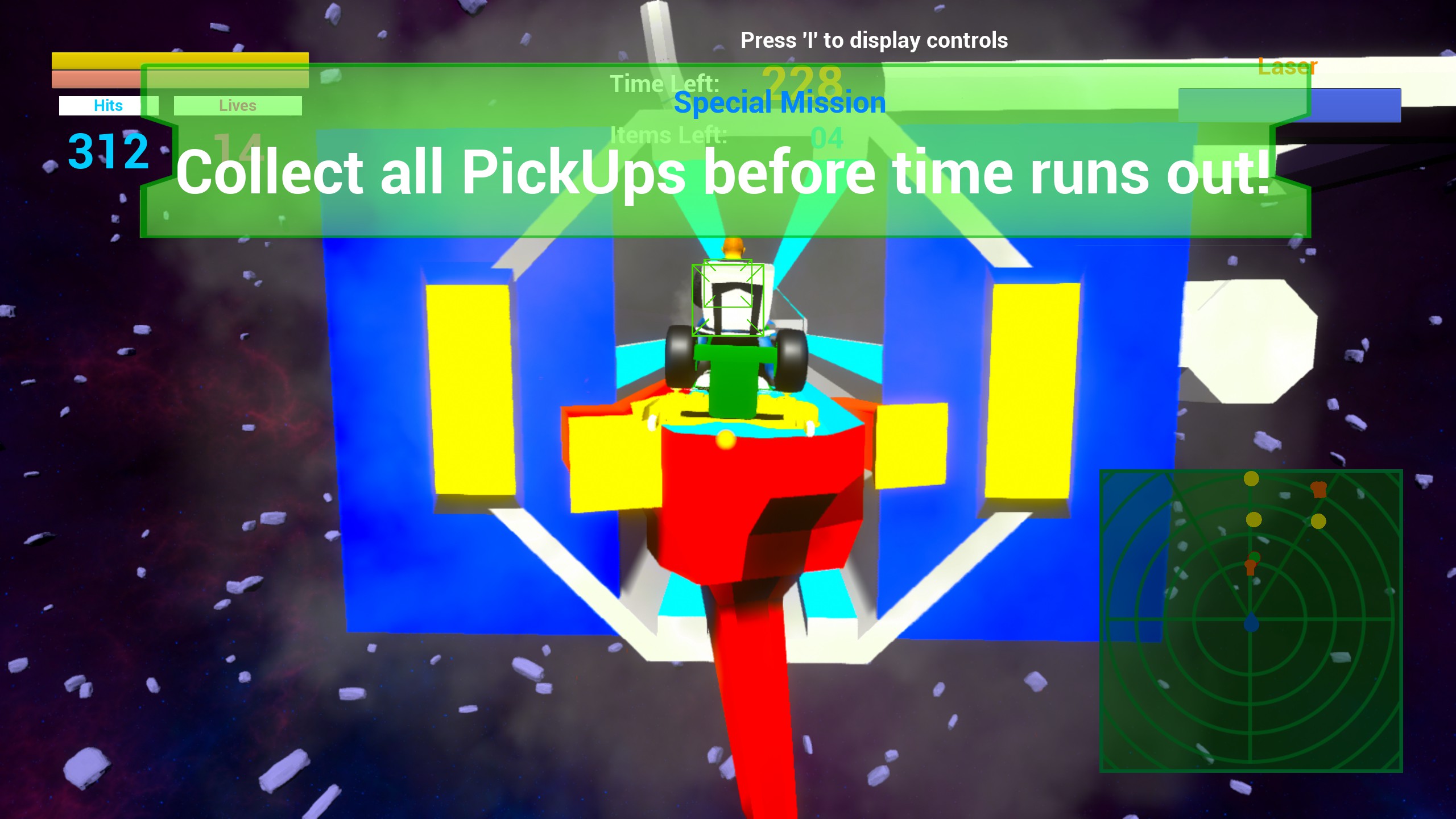 A hit counter for defeated enemies is displayed on the top left of your screen as well as a radar that displays enemies on the bottom right. At the end of each stage, it tells you how many hits you scored, and if you get enough hits, you can earn an extra life. Now for some of you older ladies and gentlemen out there, what I’m saying may sound familiar to you. That’s because Lawnmower Game: Space Fight is a no-budget indie version of Star Fox 64 and it doesn’t even try to hide that fact. The crosshairs are nearly the same, the controls are mostly the same, and it even uses the “B” for bosses displayed on the radar. In a way, it’s almost funny because prior to playing the game, I happened to think of Star Fox. What a coincidence that what I would be reviewing would be so close to it.

The presentation of Space Flight can vary. The menu and UI is very “school project” like with very basic interfaces and graphics. The game defaults to “Epic” graphics settings, which also turns up the brightness and reflection by an absurd amount, making navigating through the first and third levels somewhat annoying. The lawnmower flying through space is silly and will get a laugh out of some, but I was disappointed that the enemies were just generic UFOs, gun towers, and other flying ships. I was hoping the developer would play a bit more with the concept and have enemy types be other forms of landscaping equipment like weedwackers, wheelbarrows, or tractors. Unfortunately, there is no music, the only sounds accompanying you are the pew pews from your lawnmower and other ships. 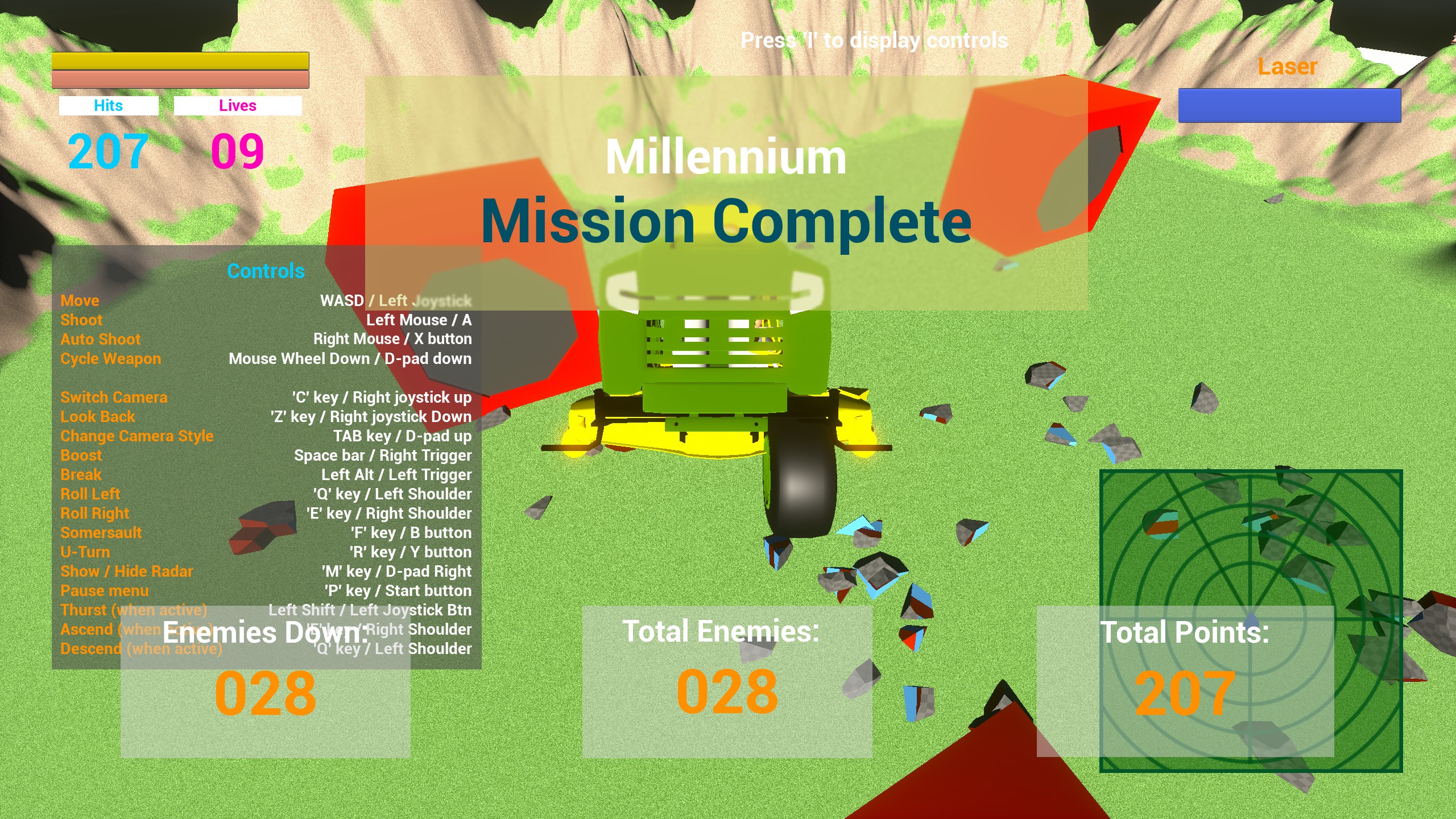 I encountered a couple of glitches while playing, such as if you happen to lose a life against the first boss, when you respawn the screen will shake violently. For some reason, this will also cause the boss to go out of its boundaries and chase after you before you even get to the area. You’ll have to slowly wait until it comes back before you can fight it again. Another glitch is that every time a level is completed, the graphics will switch back to the Epic settings. Other than that, I haven’t run into anything else major.

In terms of morality, there is the obvious spaceship violence. Shoot them and they blow up. Nothing else more to add with that. What isn’t so obvious is the language. There is exactly one usage of the word “sh*t”. Kinda strange as there is little dialogue in the first place.

A homage or a copy of Star Fox 64—only the developer can truly say, but Lawnmower Game: Space Fight does take a lot from it. However, it also lacks a lot of the features that make Star Fox such a beloved classic in the first place. The five total levels are fairly short and all of it together will equal somewhere around a half hour of playtime. Without mutiple pathways or even unlockables, there is very little replayablity too. The premise is silly enough and the price is so low that even devout lovers of Star Fox and similar games can get a simple distraction, but all others may not find much appealing out of this frontier.