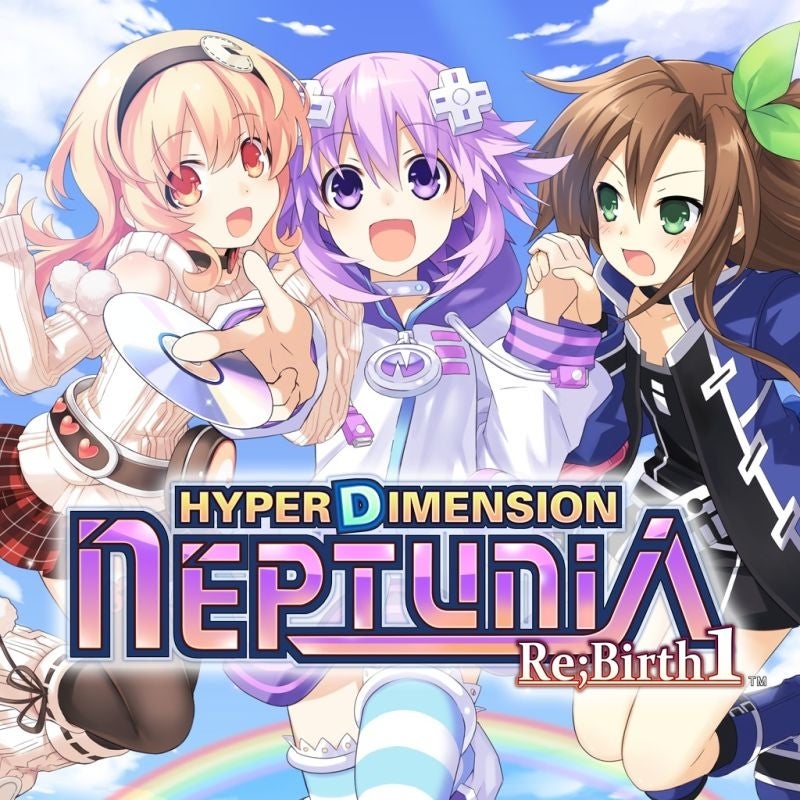 Note: Based on the base game content only, minus DLC

A bit of background. The original Neptunia trilogy was released on the PS3, but while those games had a great story, it wasn't until Neptunia Victory that they worked out most of the flaws in the game engine. The series creators then decided to reboot the series using a tweaked engine based on the Victory engine. After replacing some licensed characters they lost rights to and tweaking the stories to match, the Re;Birth games retell the same basic plots, but with all sorts of enhanced mechanics.

The basic story is pretty simple. There are four Console Patron Units (CPUs, often just termed "goddesses"). While they mostly watched over the lands of Gamindustri from the heights of Celestia, they fell into squabbling one day, causing one of them, Neptune, to fall from there to the land of Planeptune, proceeding to lose her memory. Neptune seeks to find out why this happened. In the process, the game will satirize the gaming industry and lovingly roast its conventions until the end credits.

Throughout the game, many series are spoofed. The "Chirper" (Twitter parody) features occasional messages on the world map from characters parodying various game series like Mario Bros. and Monster Hunter. All sorts of references are spoofed in the various character costumes (like one hat accessory that resembles the Mario 1-Up Shroom), most of the recruitable characters are a walking collection of in-jokes (MarvelousAQL is practically a walking font of Senran Kagura memes), and the game plot itself spoofs many of the classic tropes of the RPG genre. 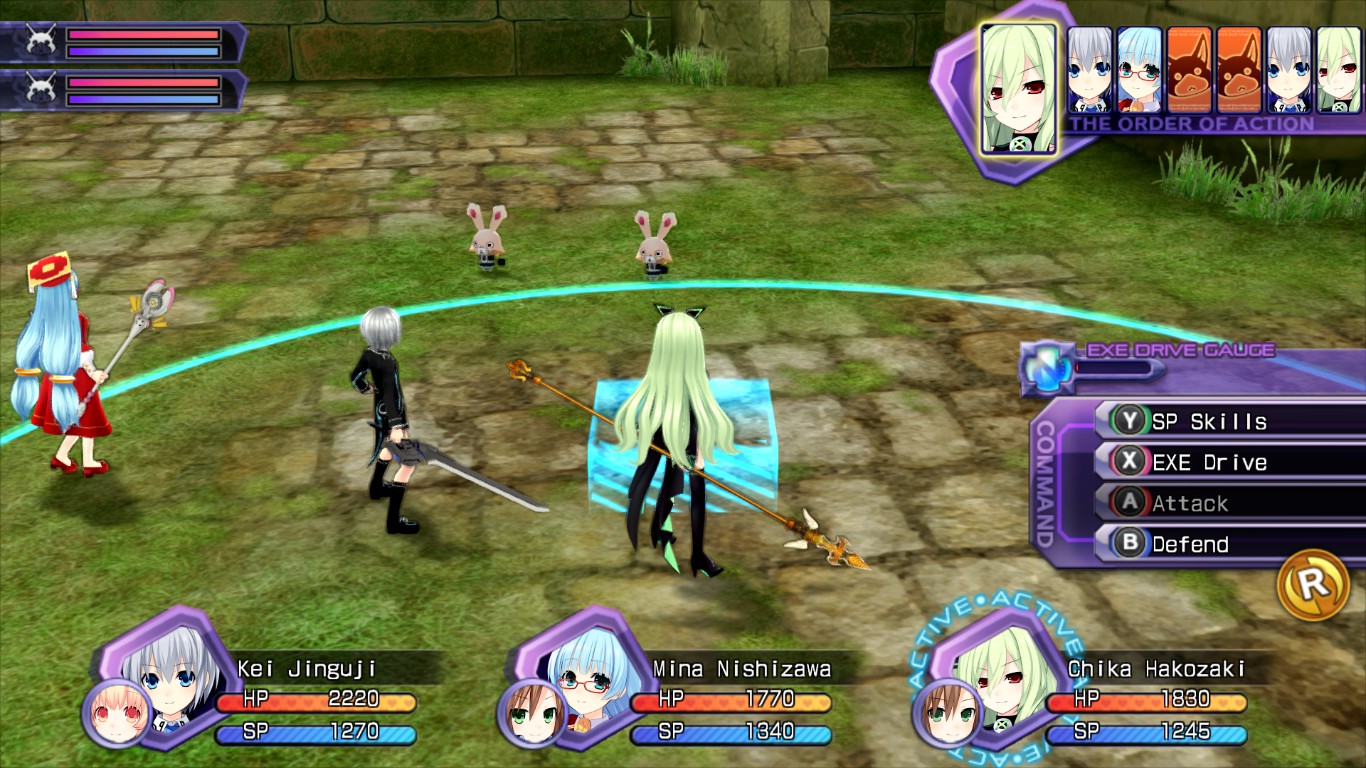 New to the series is the Rebirth mechanic. On top of the Shares system, which can be raised or lowered via certain quests, there is now the Rebirth system, which, combined with certain Shares levels and enemy dropped items, can unlock all sorts of new things from items to even new dungeons to explore. The actual game is modeled after a classic turn-based JRPG. Visual novel-style story scenes serve to tell the story in between the RPG segments. The battles, while turn-based, allow some degree of movement on the battlefield for both sides, affecting when and where attacks land.

Graphically, the Re;Birth series uses a lot of bright, poppy colors with a heavy anime style. Many areas have distinct stylings, like factory dungeons with a warehouse theme or cyberspace dungeons with neon lighting and Tron lines. Enemy designs are quite varied and some are even quite amusing, such as dog-faced slimes called Dogoos. The visual novel cutscenes feature highly animated character busts with well-acted emotions and voice flaps for the voice acting.

The sounds and music fit the lighthearted mood like a glove. Both tend to be distinct, often variations on various instruments and the music has a synth-rock infusion for the most fast-paced battle themes, like "Dancing Girl". The voice acting is available in both English and Japanese, and in both cases is quite well done.

The controls can be either keyboard and mouse or any Steam-supported controller; with remappable keys for either mode. I seriously recommend using a supported controller, the keyboard even when remapped is not very fun and quite awkward to play on. Otherwise, the controls for gamepads are very quick to learn, and the game features easy-to-follow button prompts when and where needed. 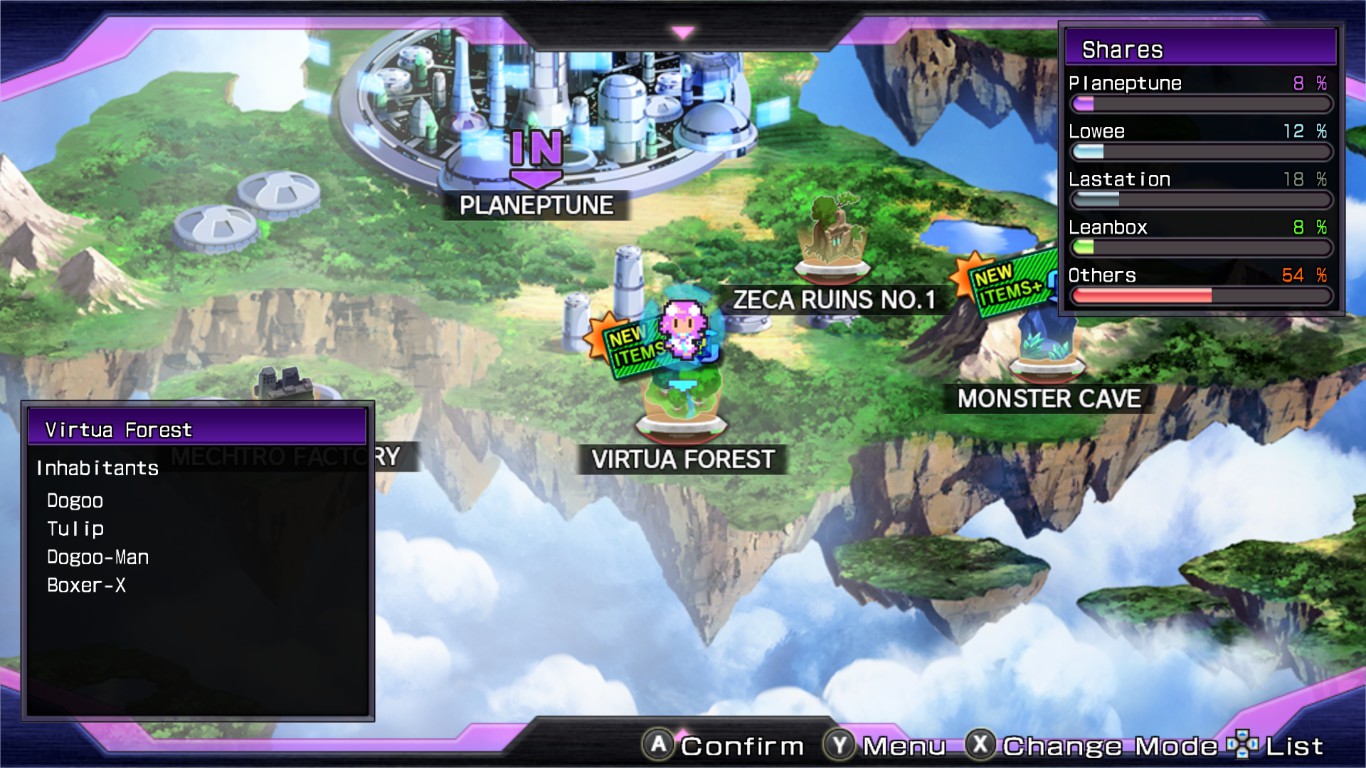 This game is quite stable and runs fine on Windows. It will run quite well in Linux via Steam Proton and should work well on the Steam Deck aside from some possible black video issues (which is not a serious issue since the game makes little use of these). Third-party fixes are needed to fix the buggy fullscreen option from failing to work, but it will simply disable back to windowed mode without crashes in that event.

Morally, this has some issues.

Violence is of the RPG-styled "give orders and watch it happen" variety. There is no blood and gore, and all remains disappear immediately after a battle. The Language is generally clean, a few h*ll and d*mn uses, alongside some rarer b**t**d and a** are about the worst of the profanity that can be heard. There are a few recurring jokes about cleavage sizes (two characters trade barbs in this vein), but that's generally it for sexual humor.

Some of the female outfits tend toward the pretty revealing bare minimum, and while a lot of it is mostly in jest, there are a few genuine references to homosexuality, such as one character who is a fan of yaoi romance (male/male) games.

There is a fairly low degree of references to the supernatural and occult, given the fact the world is a parody of gaming (and has a digital world theme in general). Some monsters appear fairly demonic, and a reference to a generic evil overlord cult is made (though it's more reference than actual substance in practice).

Morally and ethically, the game is set from the perspective of actual game console personifications (who double as political figures) and their adjutants and supporters, so there are no authority issues. The values the main characters as "goddesses" espouse are generic good values for video gamers like honest play and an aversion to game piracy. In general, there is nothing worth commenting on that would be an ethical concern.

Technically, aside from some dated engine issues that require third-party fixes, this is a technically sound game and a simple comedy RPG that is worth getting, especially during sales where the prices get dirt cheap. Morally, it's got some concerning content, but nothing an older teen on up could not reasonably handle. Overall, while not as good as the games that came after it, it's still a good game on its own merits and a fine remake of the original Neptunia.