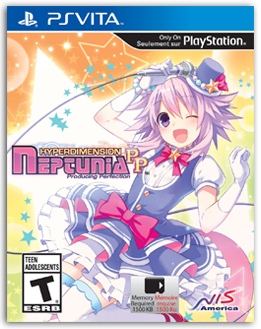 Hyperdimension Neptunia: Producing Perfection is my first foray into the Hyperdimension Neptunia series.  While I am not familiar with the console based goddesses, their storyline in this game is completely separate from the RPG series.  Your job in this game is to help the goddesses reclaim their power by gaining back shares in their universe (Gameindustri).  A pop idol group called MOB48 has attracted the attention of their followers and the goddesses want to become idols to gain their favor again.  After MOB48 is dethroned, the next goal to complete the game is to become the number one idol in Gameindustri.

The four goddesses (Blanc, Neptunia, Noire, Vert) have summoned you to be their producer and there is no way to decline this honor that has been bestowed upon you.  Before starting the game you have to choose which goddess  to assist.  I recommend playing as them all to experience all of their silly conversations and quirks.  They each have different  strengths and weaknesses when it comes to their stats including expression, knowledge, trust, rhythm, and vocals.  These stats determine story scenarios and concert performances.

There are multiple bad endings and in order to get a good ending you have to handle the story sequences in a particular way.  A guide is pretty much required if you wish to leave the world of Gameindustri on your own terms.   Some ways to earn a bad ending include exceeding the 180 day time limit or by letting the idol's stress reach 100%.  If you wish to earn every achievement, you'll have to both fail and succeed. 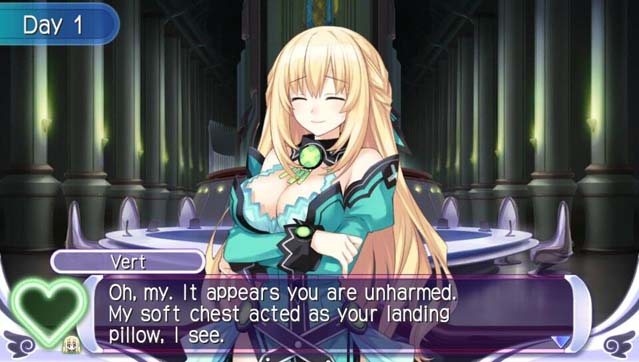 Hyperdimension Neptunia: Producing Perfection plays like a visual novel.  Every day you're allowed to do one activity that's work or learning related, relaxing, moving, or putting on a concert.  The activities that make the most impact have a cooling off period that won't let you do that option again for a set amount of time.   Concerts are very effective and cannot be done back to back or if the idol doesn't have enough guts.

Most activities add to your idol's stress level and when it reaches 60%, they appear noticeably tired.  To reduce their stress they can go on a vacation, or see their weekly/monthly ratings go up.   Other recreational activities include building friendships with the other idols or growing the relationship between yourself and your client.  If the goddesses wish to team up and form a group, their friendships must be strong in order to make it happen.  Once a group is formed, the shares are divided evenly between the members.

Groups are optional, but when a idol is performing solo and singing her song, she can transform into the seductive HDD mode to drive her fans wild. Triggering the HDD mode requires the back touch screen and was difficult for me to utilize it.  The HDD mode is great for making the fans happy and will boost up the overall score.  The better the concert score, the more fans she can win over to her side. 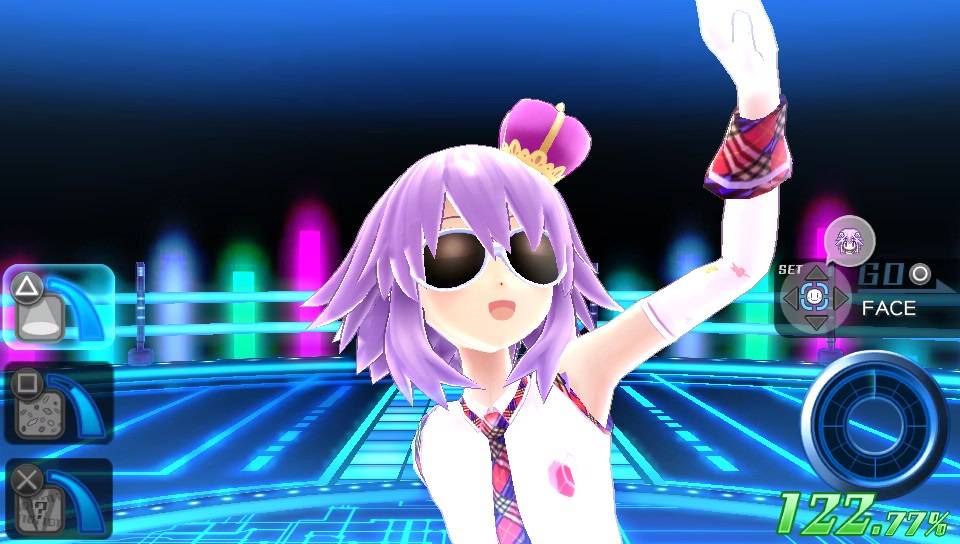 Concerts give the player the most control with the song/special effects selection and the ability to change the camera angling. If a player desires, they can view up a goddess' skirt.  Fortunately, they do wear underwear.  Their cleavage in many cases is very revealing and often jiggling.

Besides the sexualization of the goddesses, there are many awkward scenarios like assisting a goddess by removing a bug that went under her skirt.  The situation is conversation based so there is nothing to see or do (other than cringing).  There are many instances where the goddesses will get upset and cuss at each other and sometimes at the player.

Despite the cussing, the voice acting is really well done in this game.  Unfortunately there is only a handful of songs which is unusual for a music based game.  Another downside is that they are all sung in Japanese so I have no idea what they are singing about.

Other than those flaws, I still enjoyed my time playing Hyperdimension Neptunia: Producing Perfection.   The gameplay is relatively short and can be completed in a a couple of hours unless you aim to unlock all of the achievements.  Unfortunately, the game does get repetitive after a while.  I picked up the game on a PSN sale for a few dollars and I have gotten my money's worth, but I wouldn't recommend paying full price for it.