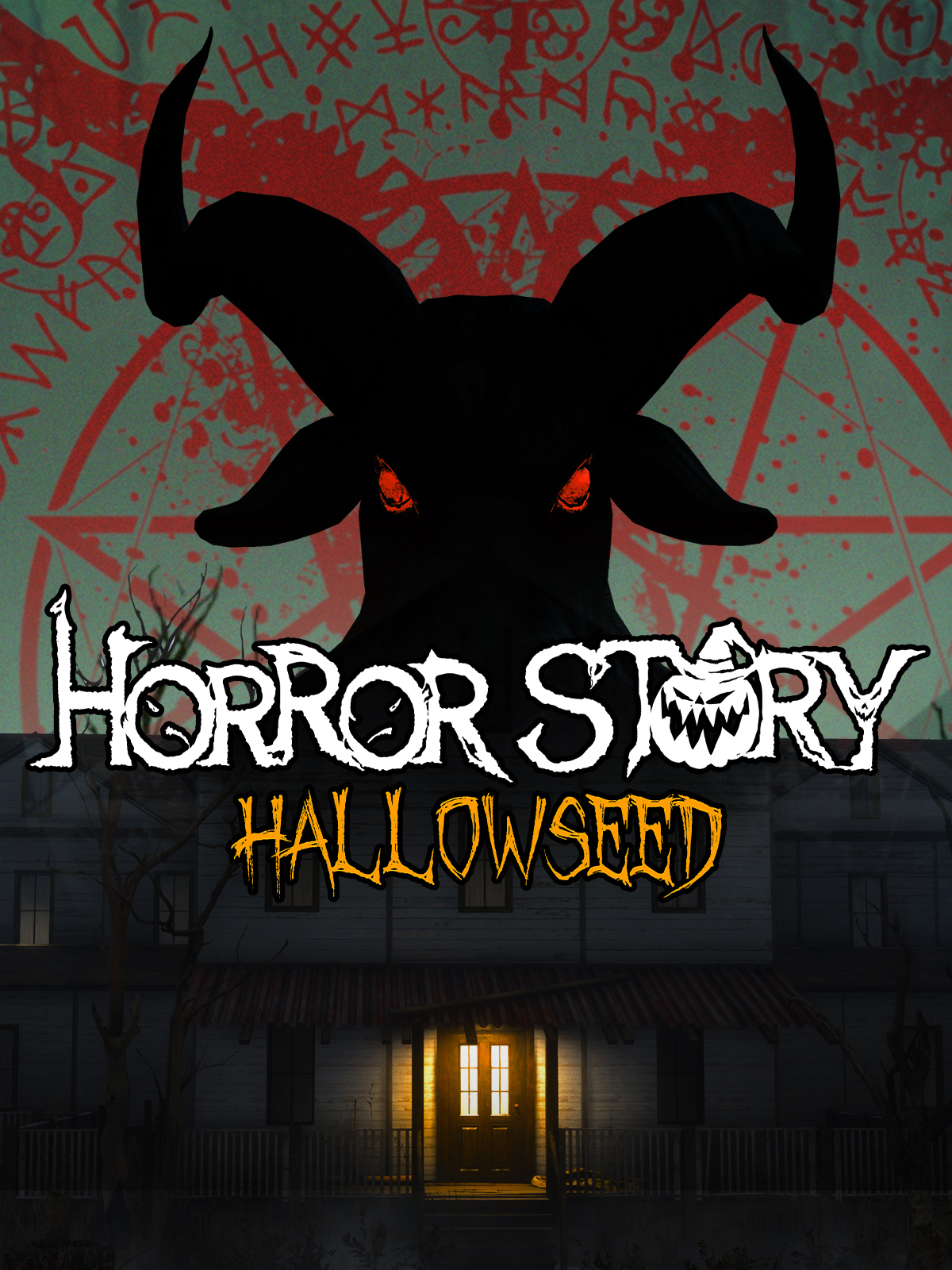 Thank You Fulgrum Publishing for providing us with a review code!

I do enjoy the aspect that many developers and publishers release horror games around the Halloween season. For me, it always seems like I get to these types of games far past the season. Horror Story: Hallowseed is about a group of three young adults—Michael, Anna, and Jay, messing around in the forest. Rumor has it that the forest they are in is haunted. As fate would have it, Michael gets separated from Anna and Jay and has to find them by going through the forest and coming across an abandoned manor.

Hallowseed is a first-person adventure horror game where Michael explores his surroundings to move forward in the plot. Within the creepy aesthetics is light puzzle solving. Micheal may have to come across a pair of tools to force open a door or collect keys to open the various rooms in the manor. While this is happening, Michael is being haunted by the spirits of the damned as well as a few demons, but he has trouble telling which is which in the dreary forests and dimly-lit corners of the house.

Controlling Michael is like any first-person game so if you ever played one before, it’ll take very little time to adjust. He’ll sometimes utilize the flashlight on his phone or matches he collects to light the way. Controls cannot be rebound, but since there are few things to do in terms of controls, it isn’t a dealbreaker. Gamepads can be used, but menu navigation is done by the mouse and the game never says what buttons on the controller correspond to what action so it’ll take a little bit of experimentation to figure out what does what. One really strange decision is that adjusting mouse sensitivity and audio is done in-game, with the arrow keys. It works, but it’s such an odd choice to make. 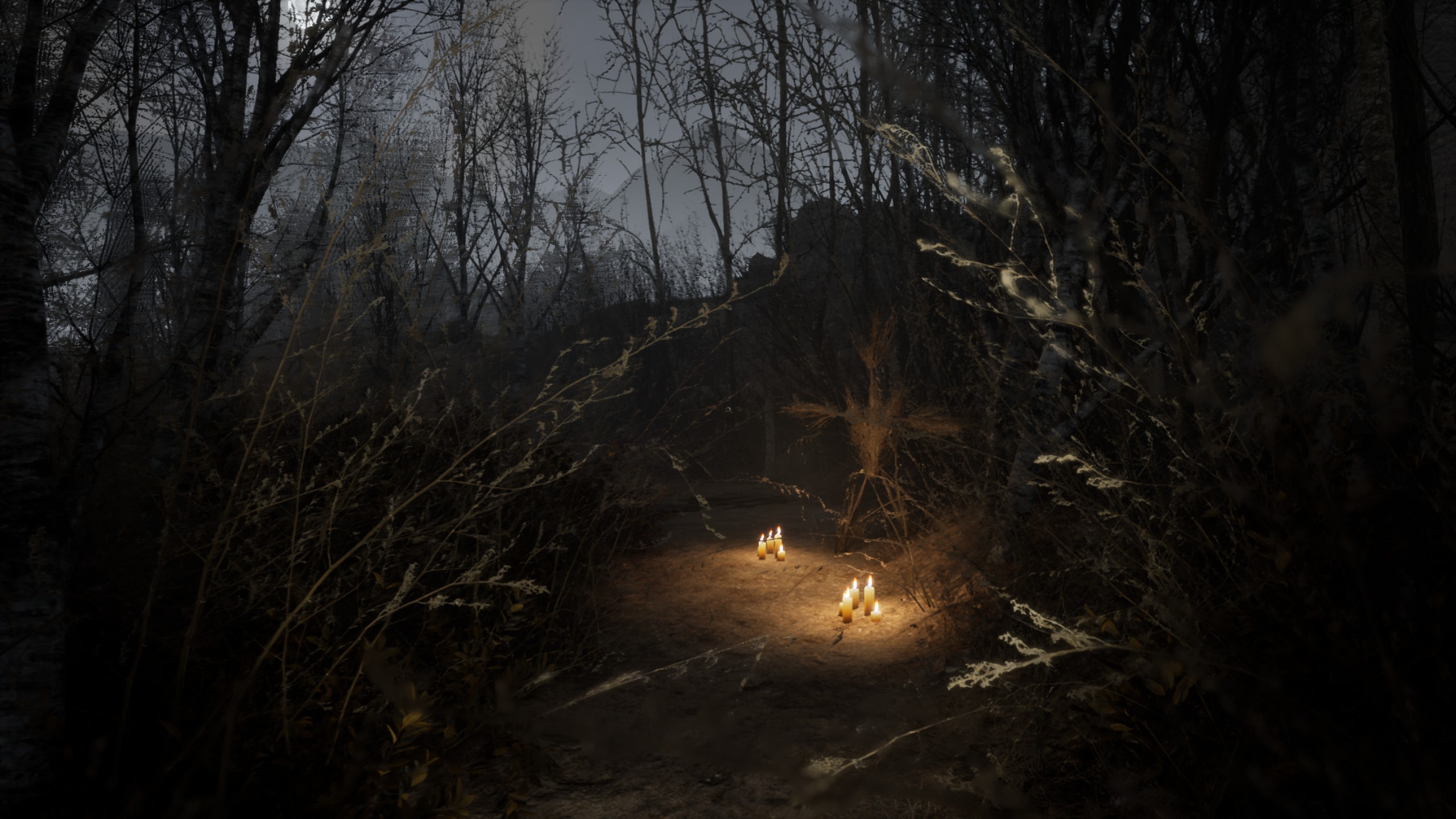 There are only a few musical tracks in Hallowseed, instead relying mostly on sound effects to accompany the atmosphere. All characters are voiced and the voice acting is acceptable considering how few roles there are in the first place. With sound effects, every step Michael takes makes a different sound depending on what surface he is walking on. The leaves and dirt will crunch beneath his feet while in the forest, while the worn-out floorboards in the house will creak and echo. Sound effects also play a part in the puzzle-solving aspect as the jingling of keys will play whenever Michael is close to one.

The graphics of Hallowseed are pretty standard, but make great use of shadows and lighting. The way the flashlight and matchlight illuminate every surface as well as how far images blur when focusing on something close is done cleverly. The dreary color pallete further immerses a player into the creepy setting and I will admit that a few moments made me jump a bit. Hallowseed focuses mostly on paranoia-based fear instead of jumpscares—but a few jumpscares are present.

While Hallowseed is not part of the survival-horror genre, there are a few failstates that can be obtained. I’ve hit every fail state, and not for the best reasons. The most common fail state is when Micheal is being chased by the demons. Whenever the event for this happens, the screen will turn black, and then the demon will spawn in front of you. However, if you are running, your character doesn’t stop moving when this fade to black happens. So when the demon spawns, you are instantly caught by it and suffer a game over. The only way to stop this is to stop running when you know the event is supposed to happen. Something that was probably meant to be scary and tense, ended up becoming more of an annoyance, especially when loading times are fairly long (even on an SSD). 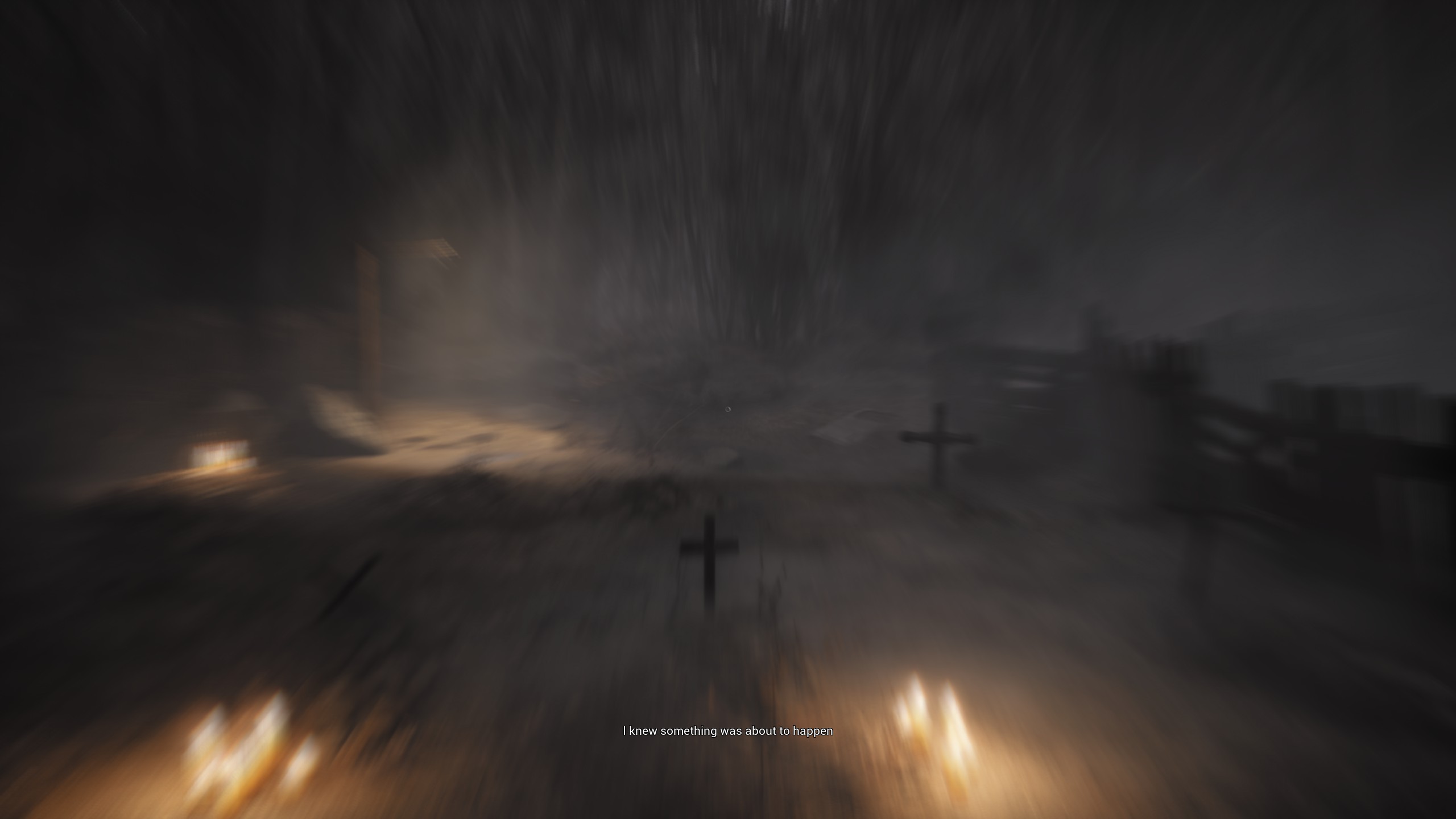 Another stability issue happened at the beginning when starting up. Hallowseed will begin with a black screen, but simply adjusting some settings in options and quitting out will fix this.

As with many horror games with settings like these, there is plenty of language to be mindful of. “F**k”, “sh*”t”, “b*tch”, and “A-hole” are used pretty frequently while God’s name is used in vain a couple of times. Regarding violence, violent acts aren’t shown, but there are plenty of ritualistic sacrifices seen with blood and gore present. As the plot does revolve around satanism, there are plenty of references to it such as inverted crosses with accompanying goat skulls. There are also ouija boards present and one has to be used to progress. As with satanism, Catholicism and Christianity play equally important roles in the plot. Michael himself may even be a reference to the archangel, given Micheal’s role in the story (or it could just be a convenient coincidence).

Horror Story: Hallowseed ends on a bittersweet note, showcasing the consequences of fooling around with evil sources. While it only took me around 3 hours to complete, I found it to be interesting—in spite of the rather poorly programmed fail states. Morally, it’s as violent, bloody, and language-filled as most horror fiction targeting an adult audience. It does showcase satanism, but in no way does it endorse the blasphemous belief. While I do feel that $20 is a bit too much for something with low replay value (there are only two endings), I did see it go as low as 50% off and when that happens, I feel it is worth checking out for a creepy evening.