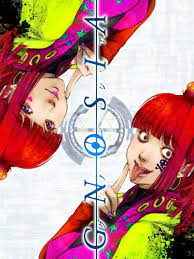 Thank you PLAYISM for sending us this game to review!

GNOSIA is an interesting concept, and it is also a timely game design. While the party game Mafia is a nearly timeless game (not video game, to be clear) where some players are pitted against others and deception is needed to win, 2018's Among Us took that game's ideas and put them in a simplified multiplayer online game that now has hundreds of millions of downloads. GNOSIA takes this social deduction play style and manages to successfully turn it into a single-player game, which is no small feat. It uses the visual novel format, so conversations happen with the other character's portrait on screen while you talk with them. You can also level up through play, and raise your stats, which helps make your character more effective at persuading others - or avoiding cold sleep.

The basic premise of GNOSIA is that each loop, or set of turns before it all gets reset, is that you have anywhere from five to fifteen people onboard, up to six of which could be Gnosia. If half or more of the remaining crew at the end of a turn is Gnosia, all humans that are left are wiped out, as Gnosia kill them all and take over the spaceship everyone is on. If all Gnosia are eliminated or put into cold sleep, which effectively removes them from play, humanity survives and they proceed to their destination. However, the main characters, you and Setsu, want to see everyone survive - and so through a turn of events are forced to experience this process over and over again until they figure out a way to save everyone.

Each loop consists of several days; at the end of a day, you rest for the night and start again in the morning. At the start of a new day everyone is gathered together, and you basically spend most of the time deciding who is going to be put into cold sleep that evening, after which you have a bit of time to talk to someone else before bed. On most nights, the Gnosia will then kill a human as they hope to whittle down the enemy (human) population to below half, thereby guaranteeing their success. The Gnosia onboard also try to convince the humans that one among their ranks is suspicious and should be put to sleep, while the humans try to identify who the Gnosia are and put them to cold sleep. Each loop you can play one of several roles, as well as a Gnosia. Since all Gnosia know who other Gnosia are, they have a strong advantage - but fewer numbers. It's a constant struggle between suspicion and trust for everyone, and it's remarkable how well this works in a single player format.

Strong Points: Interesting premise, story, and characters; good art
Weak Points: Very repetitive gameplay loop, with tons of reused phrases and a fair bit of grinding; some reported bugs in the PC version; no Steam Cloud support
Moral Warnings: Curse words like 'd*mn', 'sh*t', '*ss', 'd*ck', and 'h*ll' present; lying, deception, and murder is critical to the story and required to succeed; a fair amount of sexual or suggestive dialogue; some dialogue borders on sexual harassment; sex and masturbation mentioned; some characters show massive cleavage with the bottom half of her breasts fully exposed (no nipples); some characters are seen showering, though little is shown on screen; two characters are 'non-binary', and the game is preachy in a few places espousing 'modern gender theory'

That said, one of the major downsides is that people often repeat themselves - a lot. Everyone has a few select statements they use when supporting, doubting, replying, and so on, and days and loops seem to go on somewhat endlessly at times. It's great that storyline sequences are drip-fed occasionally, as otherwise it could easily get too boring. Even still, I found that getting all of the necessary story pieces unlocked to see the ending certainly became tedious, and while I did pretty well on my own, I eventually referred to a guide near the end, as certain character notes and achievements are not always obvious to unlock.

As you play you gain experience, and you gain a whole lot of it if you do well. If you are one of the Gnosia who successfully killed off the crew, or a member of the crew to successfully eliminate all Gnosia, the bonus experience is quite a lot, and can often lead to multiple levels gained at once. You can apply your experience at the end of any day, and you can apply your newly earned stat points to any of the six stats available. What they do is well described in game, and I found raising them all together in a fairly even pattern worked well. Some skills are locked behind stat points, so it definitely pays to raise them all - though focusing to unlock a skill makes sense, too. Some stats help you lie better without being detected, others help people believe what you say (truth or not), others help you avoid suspicion, and so on. Once you raise them high enough, getting people to put whoever you distrust into cold sleep becomes trivial, so setting up the circumstances you want becomes more important than actually avoiding the suspicion of the others on board; most of the time anyway. Getting killed by Gnosia overnight still stinks, and can mess up a good run sometimes, even at high levels.

Some players on the Steam forums believe the PC version has a bug where progress can all but halt if you don't exit the game during longer play sessions. While I can't confirm this with absolute certainty, since most progress is a difficult combination of situational circumstances and random chance to unlock, I did find that progress seemed to trickle during a few long play sessions. My way of working around this was to exit and restart the game every 30-60 minutes, just in case - and I was able to see everything within an expected amount of loops (around one hundred and sixty or so). Doing almost anything over one hundred times can get repetitive, so yes, it did at times. In order to progress you need to eventually collect all character notes, which means that quite a few events may need the perfect setup or multiple tries to pull off. Thankfully a good chunk of them I was able to do through natural playing without a guide, but not all.

It has to be said that this game, while interesting, has a whole lot of appropriateness issues that may make some readers think twice, and for good reason. Before I get into the heavy stuff, let's just cover the basics first. 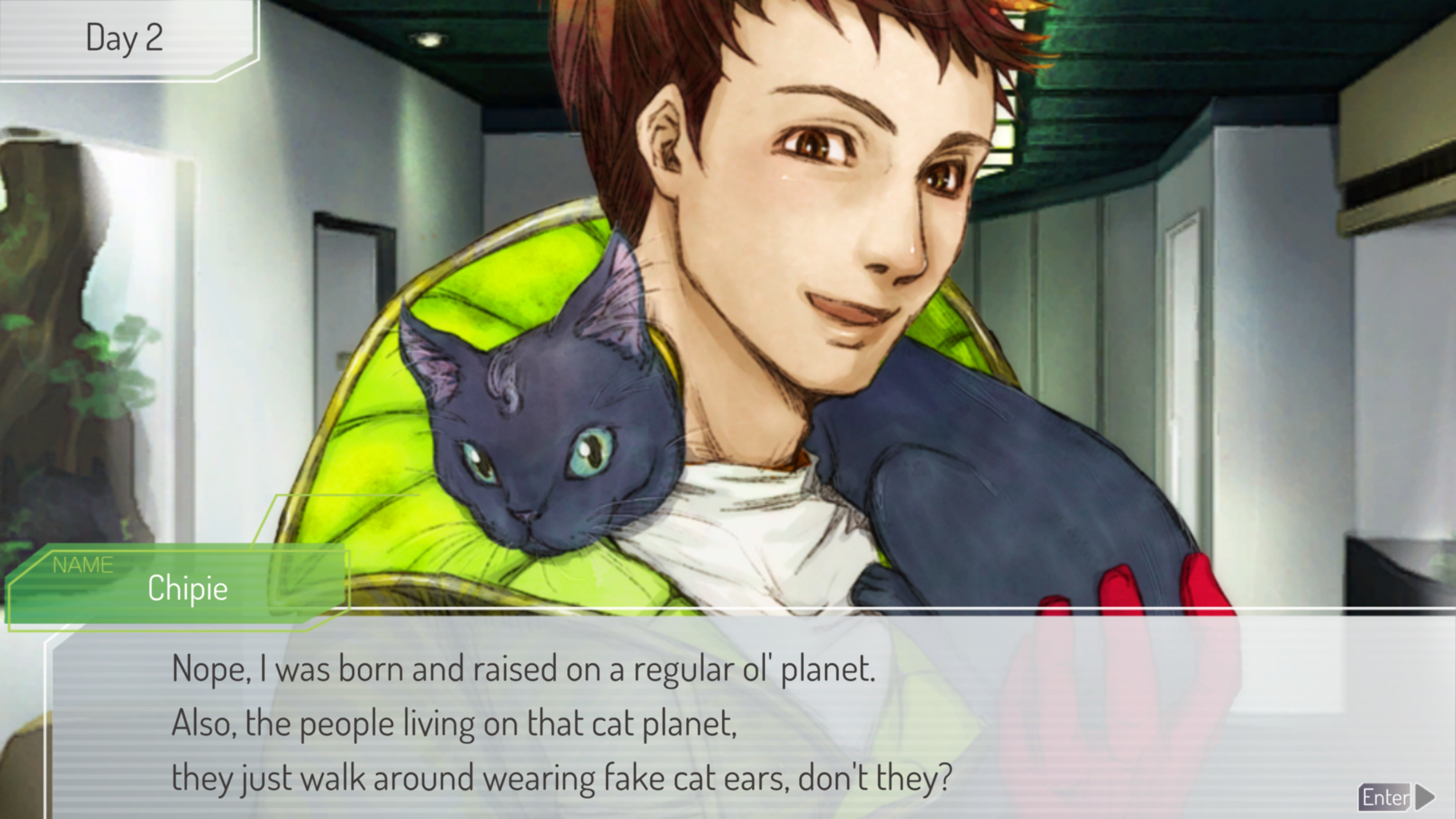 Curse words are commonly used, like 'd*mn', 'sh*t', '*ss', 'd*ck', and 'h*ll'. Lying and deception are necessary, and sometimes you or other players can detect lies, and you can choose how to deal with said lie (or get caught in your own). You also choose characters to murder (if you are Gnosia), and this is required to play and progress through the story. No blood or gore is shown; it's done in a 'choose who to kill' kind of way.

The sexual content is more of a big deal, and in ways not many games currently falter in. The more common includes a fair amount of suggestive or sexual dialogue, including a guy harassing another character, along with saying he was masturbating. This same guy offers to do sexual favors for you for saving him in one scene I noted. (I played as a male.) Another female asks if you want to go 'all the way', and if you agree she gets freaked out and backs down. One female wears a very small amount of clothes, and her breasts just below the nipple (no nipple is shown at all) are completely exposed all of the time. She wears an extremely tiny pair of shorts to go along with that. There are shower scenes with a few characters; though little is shown, sometimes they invite your character to join them and your character gets to see everything, even if the player does not.

Even beyond all of that, there are two characters who are 'non-binary'. Some people believe this is a change from the original, as they feel that the term in Japanese refers more to a 'none' gender, rather than the concept of 'non-binary', but regardless, we get what we get. Your player character can choose to be male, female, or 'non-binary', and your partner Setsu looks female, but identifies as 'non-binary'. There is one scene where Setsu is being hit on by a guy, and he is certainly a jerk; he said he'd 'hit that' anyway.

Another character, this time one who appears more male (but quite flamboyant), also identifies as 'non-binary'. There is a scene where you see this person showering, and a woman with you is surprised to see this person has male private parts. This person then goes into quite the speech talking about how gender expression has nothing to do with biology, using language quite similar to 'modern gender theory' proponents, rather than couching it in science fiction or fantasy language. Outside of just 'modern gender theory', other transhumanist ideas are also present, with one character talking about changing his body into that of a cat, and discussion about uploading one's mind into the internet.

GNOSIA is an interesting visual novel/RPG that really does do something different than most. I would say that it mostly succeeds in making a single player Mafia-like experience, and that's quite remarkable. Nevertheless, while interesting, it can get repetitive at times, and I don't think it's for everyone. It must be said that the appropriateness issues, along with the somewhat preachy approach taken with 'modern gender theory' here may be offputting for some. Given this, I would encourage parents to not allow children (or even teens) to play this.

Overall, GNOSIA is certainly a memorable experience. The price is also right as well. Whether it's worth it depends entirely on if you think the gameplay and appropriateness issues make it worth your time. I can't make a clear-cut recommendation.