Usually, whenever war or military-theme shooters comes out, it’s based on popular past events such as World War I or II. Typically, they’ll have you play as the US, or an Allied force fighting against Nazis, communists, or terrorists, and rarely do these titles dive into the deeper meanings of these conflicts. They may be based on real events, but they’re usually fantastical in nature and have the simple “me good, you bad” premise. Now this game, in particular, has been on my radar for quite a while for its unique premise, one-man development, and controversial nature.

Fursan al-Aqsa: The Knights of the Al-Aqsa Mosque® (yes, the registered trademark symbol is part of the title) is a shooter based on the ongoing conflict between Israel and Palestine. According to the creator, he wanted to create a military shooter from the perspective of someone from the Middle East as Arabs in video games are almost always depicted as antagonists or terrorists. As far as I’m aware, this is probably the first and only video game from a Palestinian perspective as well as the first game in where Israeli people are portrayed as the antagonists. This is a shooter that can be played in both a first or third-person perspective where the main goal is to complete nine missions that have five objectives each.

The maps are semi-linear as in most missions you can tackle many objectives in any order you wish as the player character Ahmad al-Falastini. For some objectives you are required to complete three or four others prior. The only objective that is shared across all missions is that all the Zionists (Israeli) soldiers must be killed. Because of the semi-linear progression and open map design, the experience encourages creativity. If you’re having trouble taking one path, you may want to take the other path—it could end up being easier for you.

Taking inspiration from titles such as N64’s Goldeneye, Perfect Dark, Max Payne, and the Metal Gear series, it plays like a mash of all of them, adopting the mission structure of the former two while partially appropriating the tone and user interface design of the latter two. Those four games can be seen as fairly difficult and Fursan al-Aqsa is no different. I’d probably say that it is harder than the four mentioned—some reasons good and others not so good. Enemies can and will shred through your health bar. The fact that you can die just as easily as the enemies can keep encounters intense and make you think of every decision. The smallest mistake can mean being killed, and no checkpoint system exists in Fursan al-Aqsa. If you die, you’re sent back to the beginning of the mission—no exceptions. Most weapons are fully automatic and share the same accuracy and recoil so for the most part, you’re just going to be using the weapon that has ammo available.

The intensity can get to ridiculous levels as enemies are scary accurate and will in most cases notice you before you notice them. Sometimes this can lead to frustrating moments such as opening a doorway and immediately getting riddled by bullets before you can even react, or getting shot across the map with little to no methods of retaliation. There are also these security cameras in a few missions that if you get spotted by them, the mission ends in failure. The range of these cameras are hard to tell, as well as hard to spot. So on top of the enemy placement, these missions can lead to plenty of trial-and-error moments.

Your best friend in all of these missions will be bullet time and headshots. It’s similar to how it works in the Max Payne series, except instead of being tied to a consumable meter, it can be activated at will by simply tapping twice with any directional key. I’m sure the experience was designed around this as some encounters would feel close to impossible and it plays into the action hero role that the protagonist is portrayed in. With headshots, you restore a bit of health every time you land a successful one with an accompanying “clink” sound effect. Fursan al-Aqsa’s tone is very high energy and crazy at times. The antics the developer has the protagonists partake in are similar to all those over-the-top action scenes in many action media. In one cutscene, he’ll outrun a tank just to do a backflip on a wall and shoot the tank with a missile. In another scene, he’ll eject out of his jet to shoot down an opposing helicopter while shouting “Allahu Akbar!” Every progressing scene ramps up the intensity and coupled with the nasheeds (Arabic vocals/music) in each mission, I ended up getting quite absorbed in this experience.

But Fursan al-Aqsa isn’t without jank, and it is very janky. Simply going from first to third-person changes where your guns and crosshair are positioned, as well as your own body. Some shots that you can make in first person are significantly harder to do in third person and vice-versa. Enemies that can hit you in third person may not hit you in first person. I don’t know how this happened, but it’s there. Mission 7 has you control a tank and the tank controls are probably some of the worst I’ve ever experienced in any video game. And yet it’s my second favorite mission. You’ll get caught on corners of the map or objects half the time, and one moment in mission 8 I was forced to climb the stairs by constantly double jumping up them instead of normally walking up. I’d say that the only major jank out of the ones I mentioned is the tank controls.

Outside of the main missions, there is a split-screen multiplayer option that has the player fight against another player throughout the maps used in the single-player portion. You can also play this function via Steam remote play, with a little jank on the side, and there is a funny glitch that causes the single-player portion to adopt multiplayer functions if you exit multiplayer and try to play a single-player mission. The developer left in the beta maps and concepts scrapped for the final product for the player to mess around with, which is a nice touch. 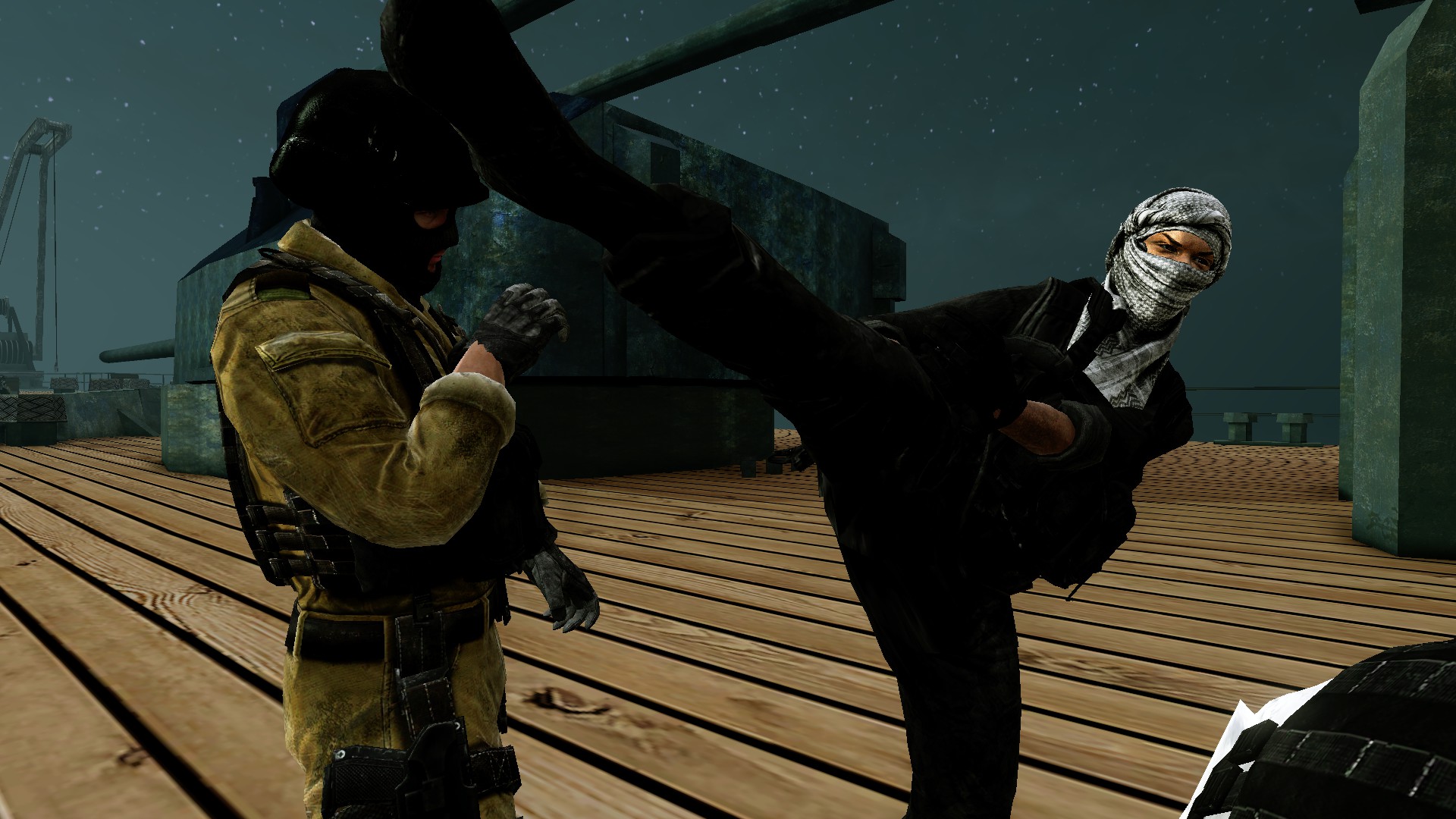 Besides the moral warnings that I touched upon earlier, there are more to point out. Fursan al-Aqsa is a violent game with blood spraying on the walls every time enemies are shot. Some weapons can make the enemy (or yourself) explode into gibs if directly hit. A few scenes are gruesome such as an Israeli soldier getting impaled by a chainsaw or burning to death, and in mission 5, you can see dead civilians in the streets. Harsh language just consists of various forms of “f**k”. In morality, the only notable aspect is that Ahmad is primarily motivated by revenge as prior to the events of the game, he was captured by the Zionists and tortured for information as well as his family being killed in an Israeli airstrike. His story is portrayed in a video file that can be accessed through the game start menu. It doesn’t play much into the religious aspects of Judiasm or Islam, just the typical “Praise Allah” from the Arabs.

I’m baffled about how I feel about Fursan al-Aqsa. It contains a lot of features that I would be fairly unforgiving of in many games such as trial-and-error difficulty relying more on memorization than mechanical skill, limited control rebinding, and AI that will swap between being perfect and completely stupid. I feel what captivated me was the over-the-top energy that never let up at any point that wanted me to keep going to see just how crazy it can all get. It’s nowhere near as controversial as some people may have made it seem as nearly everything is portrayed like the dozens of American military/action media with crazy antics, tons of explosions, and a boatload of patriotism. If you want to play this on a console, it's available for purchase for Gamejolt, but only through a homebrew (custom firmware) 360 or PS3. There is even "mod" support via text editing so lots of modifications can be made such as making the game easier or turning your AK-47 into a rapid-firing RPG.

Morally, it received an 18+ rating in Brazil for its graphic violence and language so take that as you will. From my experience, Fursan al-Sqsa is a video game first, and a political piece second. For a game made by a sole Palestinian developer living in Brazil, I found it to be quite enjoyable in spite of all of its flaws. Don’t get me wrong, Fursan al-Aqsa: The Knights of the Al-Aqsa Mosque® is still a niche title that appeals to the old-school shooter crowd, and no one else, that like their shooters to be hard-as-nails.