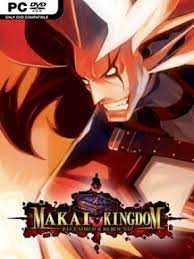 I would like to thank NIS America for the review key to this title.

Some game companies will re-release older titles on newer systems so they are accessible to current-day players. Many of these games tend to be well-beloved classics, and despite their flaws, often deserve to delight a new generation of players. Makai Kingdom: Reclaimed and Rebound deserves its laurels, though it still has its flaws.

First, some background. The original game was released on the PS2 as Makai Kingdom, named Phantom Kingdom in Japan. Since the original name was too similar to Phantom Brave, another game by the same developers, the name was changed. It does share some game engine mechanics with Phantom Brave, though it otherwise is much more like the Disgaea series. This mixing of mechanics is somewhat checkered in implementation, which I will explain further.

The story is that Lord Zetta decides to check out a prophecy his netherworld realm will be destroyed by checking the Sacred Tome containing the records of his realm's history. Upon seeing the latest record claims he'll be the death of his world, he foolishly sets the book aflame, realizing immediately after this was a seriously stupid act that WOULD destroy his realm and himself. Sealing his soul to the book before it is destroyed averts disaster, but now Zetta is stuck in book form and has to rebuild from nothing, hoping to get back his power and his body in the process.

The gameplay is divided between visual novel styled cutscenes and turn-based strategy gaming. The former conveys the story plot, and the latter controls how levels are beaten until all the game chapters reach their conclusion. Since this port is based on the PSP version, it includes "Petta Mode", which features an alternate plot to the main game featuring Petta, Lord Zetta's daughter. Both the main plot and Petta Mode share the same mechanics.

The turn-based mode uses the Phantom Brave mechanics of a movement point system and character creation. The former uses a circular area around the playable characters that shows how far they can move in any direction from where they start. They can move anywhere on the map within that area in any direction, after which they can select further commands. The latter mechanic requires objects (which can be any form of equipment the player can pick up), which can be turned into further playable characters with their stats dependent on the base item. The other mechanics are pretty standard to the Disgaea series, including multiple types of playable characters with different abilities that can be leveled up and given a diverse degree of skills depending on their equipment.

This merger of the two types of game series mechanics is something of a mixed bag in practice. On the good side, this allows levels to make movement placing important, as characters can fall off the map and be taken off the field, making it imperative to make sure enemies do not knock the player characters off. On the bad side, due to using a lot of Disgaea style characters with the Phantom Brave AI that prioritizes enemies attacking the weakest characters first, this reduces most players to trying to defeat the enemy faster than the enemy can defeat them most of the time. This also makes many character builds oriented for defense practically useless. Another flaw of this mixed engine is that many playable character types are very niche, meaning outside a few situations, they are nigh useless, making it hard to level them up alongside your other characters to keep them viable long-term. 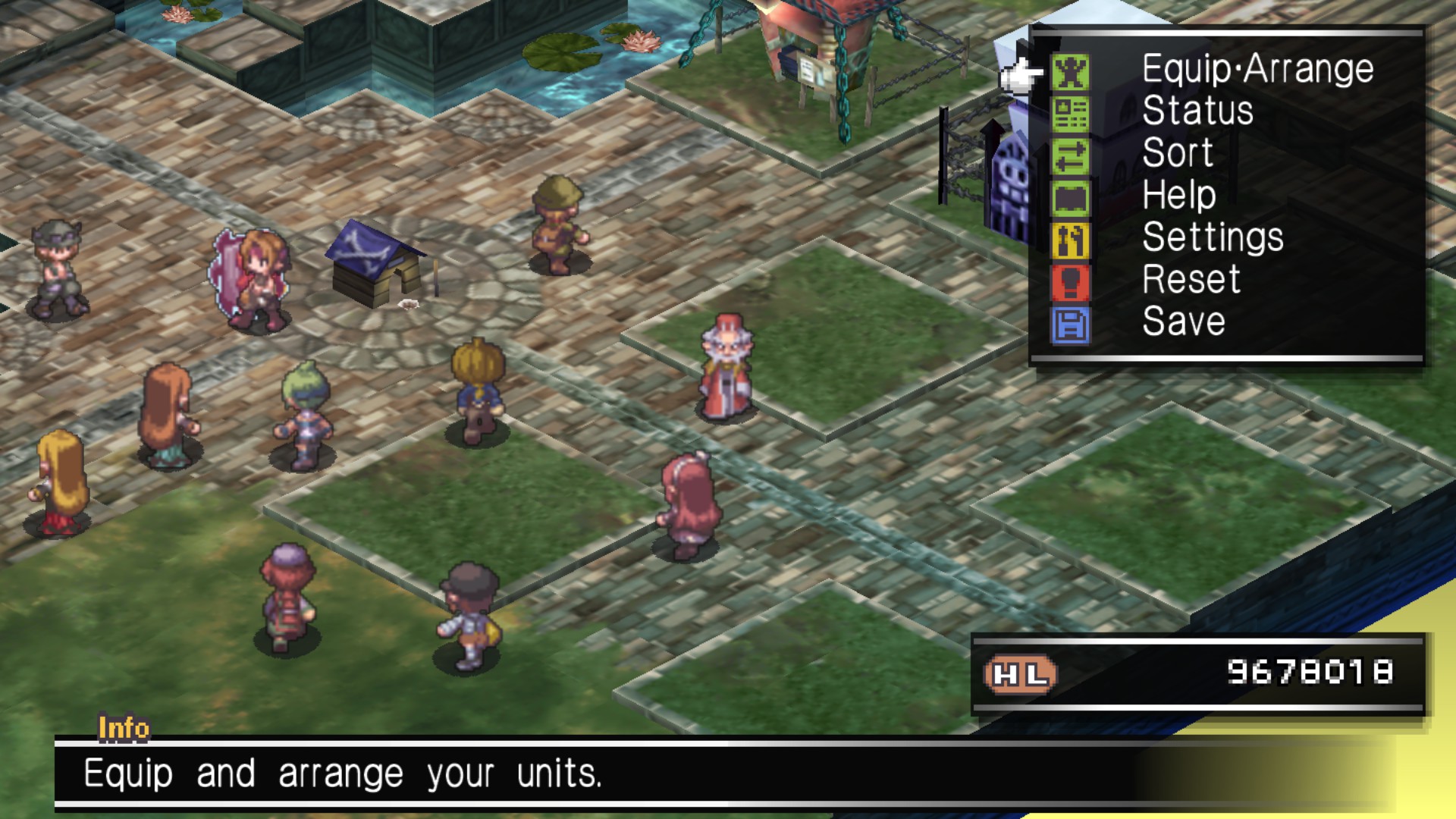 Graphically, this is a direct port of a PSP game that uses non-HD graphics, meaning it does look rather pixelated, though some moderate smoothing and scaling is applied to make sure it still looks decent at higher resolutions. That said, the art style is colorful and character interactions are very well animated. Unfortunately, there is no animation skip feature, so while many battle animations look good, some are rather long and must be watched in full detail over and over, and some can be rather long.

Music is classic Nippon Ichi, meaning it features a mix of genres, though many songs have a synth-rock mix that set the tempo of the game battles well and some of the gentler music is quite pleasant, making use of various musical instruments. The sound effects are nothing overly remarkable, though the voice acting is excellent, and if you are a fan of hammy voice acting done by excellent voice actors like Crispin Freeman, then this game will delight, and nearly everyone hilariously chews the scenery throughout the story.

The game controls could use some work. I played the PC version, and while it works fine with the keyboard and mouse, it does play somewhat more comfortably on a Steam-supported controller. Both have the buttons mapped reasonably well, but the interface is a bit complicated and the quick input can be annoying, as some actions cannot be canceled after being chosen and the player can frustrate themselves with the reactive controls being too reactive if they make a mistake.

Stability is excellent. The game has incredibly modest PC requirements that mean even low-powered laptops could easily run this title. Compatibility with the Steam Deck is currently unknown, while it should be generally playable via Steam Proton on Linux PCs.

Morally, this is going to have some issues.

Violence is of the typical RPG style "give orders and watch it happen" variety. Violence is typically limited to self-defense, though the player can attack their own characters if they want to exploit the game mechanics for earning experience if they choose.

Language is going to be pretty earthy, with every word in the PG-13 dictionary seeing frequent use, like a**, s***, and b***h. There are a few sexual references, like a backstory mention of an attempted rape (which is regarded as a heinous crime), and a negative reference to homosexuality (a character is assumed to be such on someone not interested based on misunderstanding), but sexual topics aren't otherwise in profusion.

There are a few characters with revealing outfits, like one prominent female character with a dress that plunges down to her waistline in the middle, but that is about it for sexualized displays, as the art generally isn't conducive to showing it most of the time. 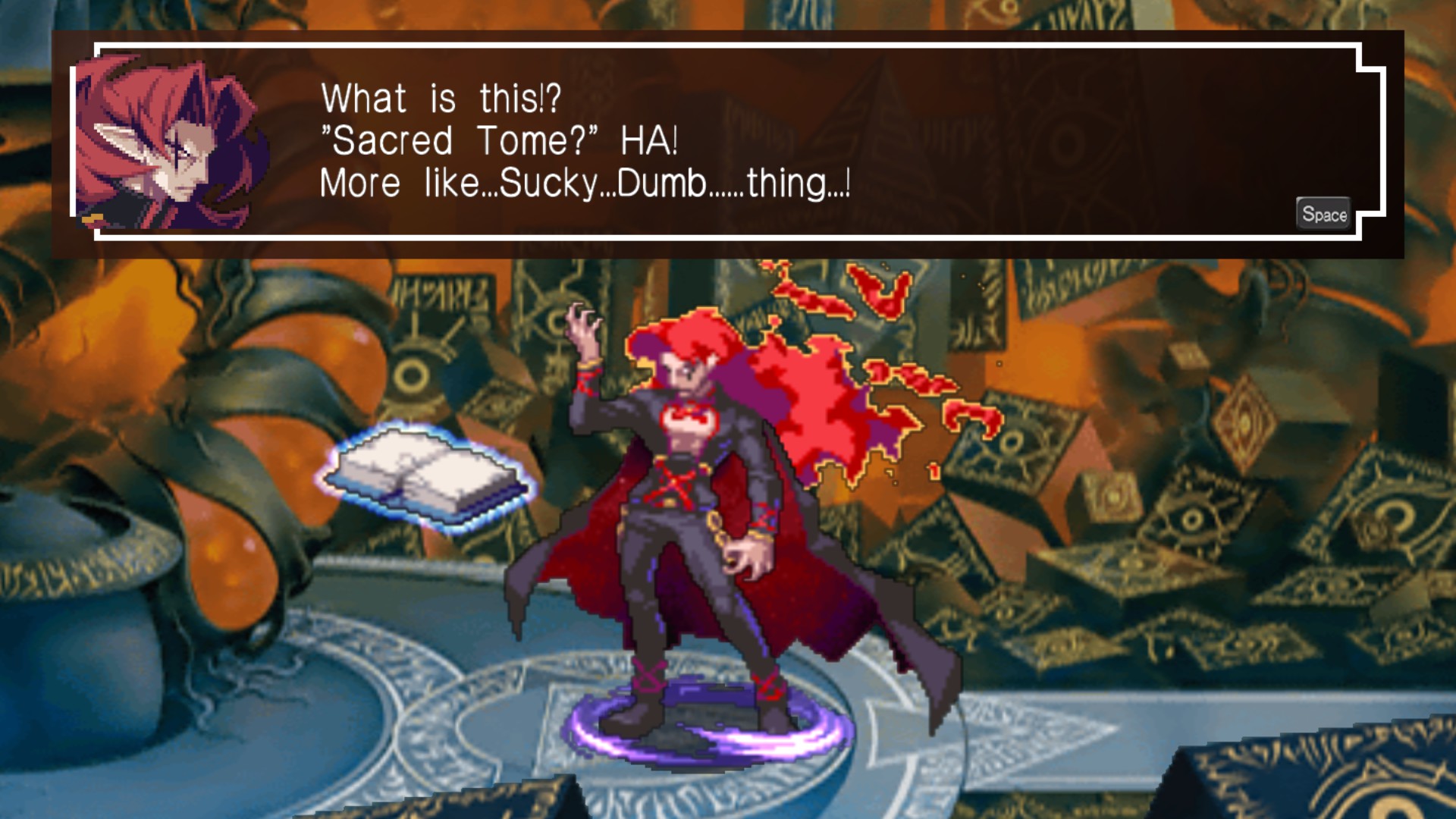 Given this is a Nippon Ichi game set in a Disgaea-style universe, the occult and supernatural are very prominent elements. All the main story characters are demons, undead, and other types of supernatural beings. Further, given the fact Nippon Ichi games tend to satirize such supernatural elements (often mixed with anachronistic things like robots for added humor), they will be omnipresent. Frequent depictions of fortunetelling, magic involving souls and the undead, demons, and so on are omnipresent, albeit viewed through the lens, most of the time, of satirical humor.

Morally and ethically, the canon ending of both modes does not require unethical acts, though to achieve some bad, non-canon endings, things like killing your own playable characters can be done to see them. Otherwise, given your character is an authority figure themselves, there is little issue with rebellion against authority.

There are some redeeming moral takeaways. Zetta is shown to initially be selfish and impulsive, prone to flaunting his power and lusting for more. Over the course of the story, he learns the folly of his ways and the virtues of selflessness and sacrifice for the happiness of others. His moral redemption is deliberately contrasted to other characters in the story, who are shown to be utterly lost to their desire for power and their slavery to their baser impulses, with the clear lesson such action just destroys them both metaphorically and literally.

Finally, this game has a good moral about the love for family. The Petta Mode is dedicated to Zetta's daughter and her love for her father in her attempts to protect him, a love Zetta winds up reciprocating. A key part of the plot of both campaigns is Zetta's love for a woman who is all but stated to become the mother of his child, which the ending shows he marries, and his prior redemption is based on him selflessly abandoning his own desires for the happiness of wife-to-be and daughter in both modes.

Overall, this game is tentatively recommended, though with the caveat only Nippon Ichi fans and those willing to tolerate some weird game balance and archaic design decisions should be willing to get it. Morally, it's got some problems, though it also has some redeeming moral lessons about the follies of selfish ambition and the joys of familial love.