Thank you XSEED Games for sending us this game and a bunch of DLC to review!

Outside of the big fighting game franchises like Street Fighter, Tekken, Mortal Kombat, and SNK's many great offerings, another fighting game developer has really stood out - and that would be Arc System Works. They not only have their own hugely successful franchises like Guilty Gear and BlazBlue, but also have a reputation of making great games for licensed properties, like Persona 4 Arena, the hugely popular Dragon Ball FighterZ, and also this title, Granblue Fantasy: Versus.

For those who haven't heard of Granblue Fantasy, it's a massively popular mobile 'gacha' game series in Japan that is also available via a web browser for English speakers - but it's not on Google Play for some reason. I haven't played it much, but I do know that it's a turn-based RPG along with heavy story exposition in a visual novel like format. Apparently it's been downloaded over twenty-five million times! This title has had several spin-off games, and even an anime series. Given the musical genius of Nobuo Uematsu and the artistic brilliance of Hideo Minaba are behind it, it is no surprise that it became as popular as it has. However, like most other 'gacha' games, a form of simulated gambling is central to the game; if you want to become more powerful, you need to spend in-game credits to upgrade your equipment through a loot box-like system. This gambling 'gacha' mechanic has also translated over to this side-by-side fighting game.

The base mechanics of the game are similar to other fighters, in that you face off against another single opponent, and punch, kick, and slash (with your weapon) until the other fighter's health bar is reduced to zero. It's a time-tested game system that is fun to play, and modern games like this one have breathtaking animations and deep fighting systems that are optimized for competitive play. The graphics and art are fantastic, and outside of Guilty Gear -Strive-, is one of the prettiest fighting games out there.

Granblue Fantasy: Versus is likely to be an introduction to the setting for many players in the West, and that is certainly the case for me. Gran has a special bond with Lyria, that seems to be magical in nature; she saved him from death, and linked her life with his, so their souls are linked. Interestingly, another character Djeeta, which is part of the Character Pack 1 DLC, is a female protagonist that can be swapped for Gran in the mobile game. Here, she is an optional character with the same story - Lyria also saves her life the same way. Only one of the two ever exist at the same time. This game's RPG mode revolves around Gran, with a few Djeeta side stories that retell things from her perspective.

The RPG mode is where I spent most of my time, and it's a great way to be introduced to all of the characters, as well as acting as a form of tutorial for the special moves of each character. You learn about Gran and Lyria's relationship, as well as the Grandcypher and her crew. The Grandcypher is their airship, and most locations in the game are floating islands, and the ship is used to bring them from one place to another. The one thing that surprised those watching my game stream is that while the main game attraction is the side-by-side fighting, the RPG mode appears to be more of a beat 'em up, as most enemies that you fight are coming at you in groups and you beat them up to fight more shortly afterwards. While it may seem strange, it is a good way to teach the player how to do basic moves and such.

The RPG mode's story revolves around Gran and his friends discovering why people in the skydom are having their memories scrambled and former friends are fighting against you. This mechanic is shown in a way to get you to fight most of your former friends, and when they regain their memories, they fight alongside you once again. It's a simple way to reintroduce everyone, and there is a glossary (that I highly recommend you read whenever you see something new) that also fills out the backstory and characters quite a bit. You can tell while playing that there is a ton to the story and characters' histories that new players don't get to experience here, but if you want to explore the browser/mobile game, it's likely waiting for you there.

One of the major goals when developing this game was to create a top-tier fighting game that is new user friendly. One of the ways that they do this is through the use of the skill button. Most special attacks, like the fireball-like attack called Reginleiv, can either use the classic quarter circle forward+punch action, or you can also just press the skill button. This option to just press the skill button comes at a cost - your skills have a cooldown, and using the skill button increases the length of time before you can use that skill again. And some attacks do more damage if performed the old fashioned way. But still, this is a great means to not only prevent special attack spam, but to give newer players the confidence to try to time their moves just right - which is often more important than doing fancy special attacks repeatedly, anyway.

Despite being new user friendly, there is plenty of depth to the combat. While many of the actions are similar between characters (but not all), everyone has something specific to them via the unique action button; this can range from simply powering up to summoning drones or other special moves. The variety is actually quite significant, and no two characters feel exactly the same (well except Gran and Djeeta, but that's to be expected). Each character has something that makes them strong or unique; some characters excel at close quarters combat, while others are better at zoning or grappling. There are also parries, counters, clashes, and more that makes combat deep and interesting. That, and simply the character variety!

The base version of Granblue Fantasy: Versus has thirteen characters, one of which you need to beat the RPG mode to unlock. The Legendary Edition includes all currently released DLC characters, which brings this up to twenty six. My review included DLC is in the middle, with twenty characters. While not a massive roster, each character plays differently enough that most will enjoy what is offered.

As previously mentioned, the graphics, art, and music is simply top-notch. Hideo Minaba was involved in the character designs, and Nobuo Uematsu was involved in composing much of the music. For those who are not familiar with them, they both worked together on some of the earlier Final Fantasy games, series long celebrated for their art and music. This game certainly is no slouch in that department. And Arc System Works makes some of the prettiest anime-based fighters around, with their 3D-rendered anime art style that's simply stunning. 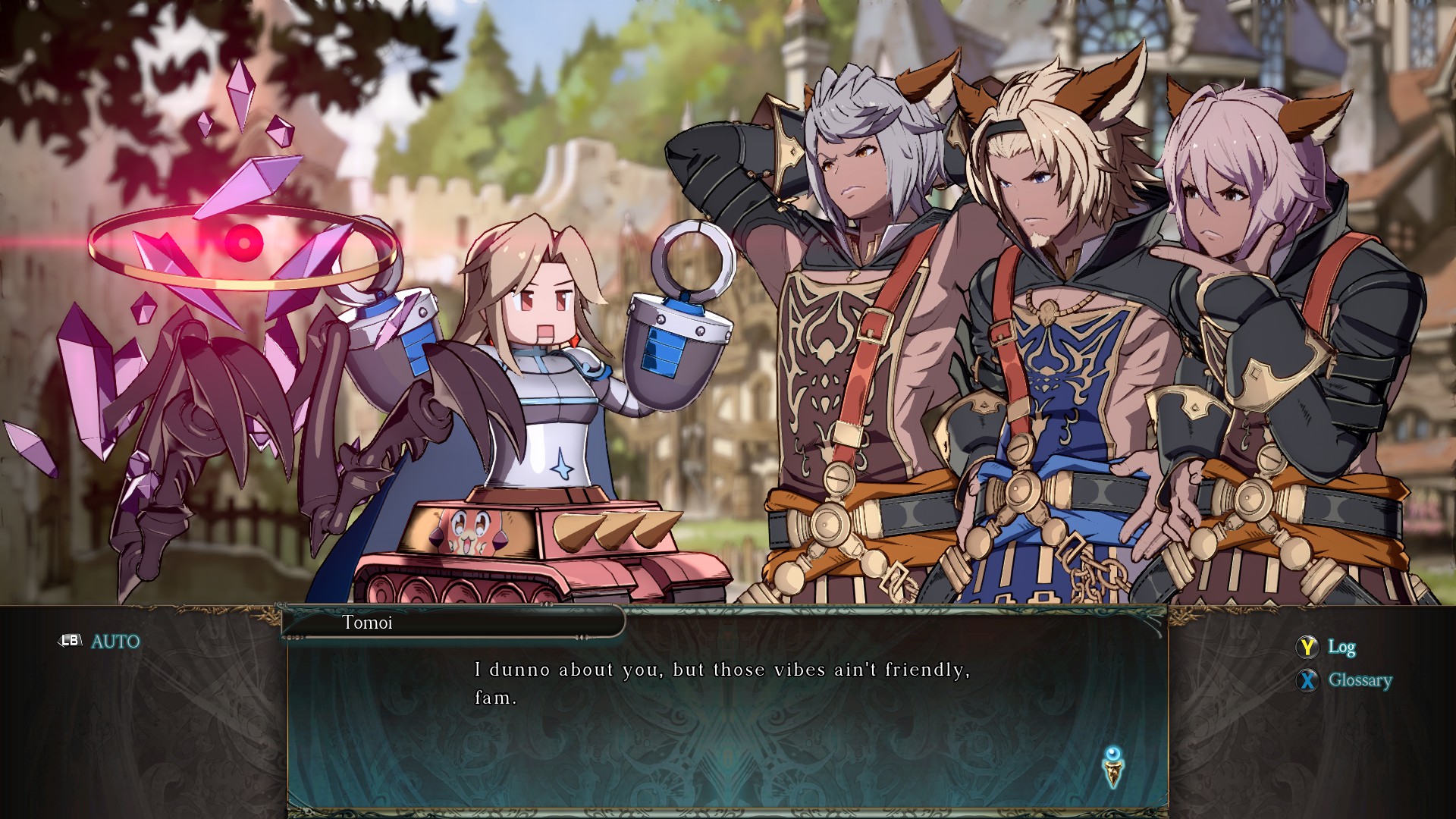 From a technical perspective, the PC version is quite nice, though it's a bit odd that some of the conversation scenes before battle render at an oddly low frame rate. Despite that, it looks great and scales down reasonably well to lower-end PCs, though of course it doesn't look quite as good. If you use a PlayStation controller instead of an Xbox one, the controller icons automatically change, which is a nice touch. I tried running this game on Linux via Steam's Proton, and it works quite well - so Steam Deck owners will likely be able to enjoy this game. Apparently there is a strange way to make it lock up on Linux, but it's also easy to avoid. Outside of that corner case, I enjoyed my time with it when I tried it.

Morally, there is a lot to talk about. Of course, you have animated violence, as all fighting happens one-on-one, with punches, kicks, and weapon slashes. Some attacks are magic based, and some enemies are demon-like, with some even being named after names for Satan, like Belial and Beelzebub. Lucifer is also mentioned, though not shown in the story. There are also angel-like creatures as well. Curse words are used, though it's not too frequent. I noticed words like 'd*mn', 'h*ll', and '*ss'.

The gacha mechanics are mostly around weapon drops in RPG mode, and are a means to make your character more powerful. You can forge, combine weapons, and spend tickets to get a random selection. This process feels very much like a slot machine, and can easily have you spending dozens or even hundreds of tickets trying to get the weapon you want. Thankfully, there is no way to spend real money on additional credits in this game (though I would be surprised if there wasn't in the original Granblue Fantasy).

On the sexual content front, many female characters wear revealing outfits, though thankfully not all. These can reveal cleavage, midriff, buttocks, and more. There is suggestive dialogue between a few characters, including some that are of the same-sex. An old man fills the perverted old guy trope. and there is even a quest where he seeks out a hot spring so he can observe the participants. There are at least two transgender characters; one male looks female via magic, and the other doesn't - they look rather manly including a beard and deep voice, since they don't want to disrespect the body their parents gave them. Of course they talk about love a lot, in order to fulfill that trope.

Granblue Fantasy: Versus is unquestionably an excellent fighting game that's somewhat hampered by its less recognizable (in the West) characters, and unfortunate release timing (right around the start of the COVID-19 pandemic). Fighting games, more than any other, are heavily reliant on in-person communities, and this timing really hurt the game. The moral issues are also unfortunate; whether you can look past them I leave up to you. But if you are looking for a high-quality fighting game that's accessible for new players, this is no doubt an excellent choice. Just be sure to get the Legendary Edition - the extra DLC characters are worth the cost, as buying them later is a lot more expensive, and you'll regret it if you don't.