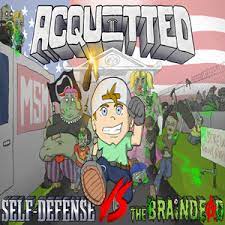 Thank You Nordic Empire Games for providing us with a review code!

Every once in a while, we are sent or cover titles that can be seen as controversial. I’m no stranger to controversy and have expressed interest in delving deeper into some of these titles. Usually, if I see a game that may offer more than what the surface level shows, I’ll cover it and judge it accordingly. The two founders of this website specifically brought this one to my attention as I seem to be one of the more “unbiased” reviewers. With games like these, you’re mostly going to get two extremes of reception—so there has to be someone out there bringing a more “objective” view to it all.

So this brings us to Acquitted, created by a very small Swedish studio by the name of Nordic Empire Games. Acquitted is the story of one young man against the horde of zombies dubbed “the braindead” that await him outside the courthouse. He was acquitted of whatever actions he may have committed in the past, and this makes the horde very, very angry. The braindead decide to take matters into their own hands and make this guy cease living. Like many Americans fearing for their lives, he takes up arms and practices the art of self-defense.

Across 100 levels, you’ll mow down the zombie horde in randomly generated, fully-destructible environments in a top-down twin-stick shooting fashion. The weapons vary greatly as you have a fair share of guns, explosives, and melee weapons. The four starting weapons are an assault rifle, a pistol, a barbed wire bat, and grenades. Eventually, you’ll obtain a shotgun, C4, and a comically large missile launcher. Shooting feels good with appropriately accompanying sound effects to it. Every weapon feels different ranging from being semi or fully automatic, the swing of the arc for melee weapons, or bullets having a wide spread or piercing effects. However, despite the large roster of weapon types, you’ll probably be sticking to 4 or 5 of them as you get more into the levels. The controls cannot be rebound but work for what they are as all keys available can work for left-handed and right-handed players. A recent update added controller support. It takes priority over the keyboard when plugged in, which has some unintended side effects such as menu and level navigation.

The braindead have an equally wide roster of zombies with colorful hair to combat you. You’ll have zombies that throw bricks, bottles that obscure your vision, and Molotov cocktails. Some zombies fly at you with stylish kicks and others may steal your goods. You’ll even come across Communist zombies and Antifa zombies carrying their respective flags. Boss zombies are huge and have a massive amount of health. The two that I saw are this massive grotesque pink-hair zombie that can cancel you in one hit, and an equally as large but herculean-like zombie in a dress who likes to shoulder check you for massive damage.

The satire of Acquitted is very biting and on the nose, overall being simple in the end. It does not pull punches against a specific demographic as the satire is very over-the-top. The silliness is even represented in some sounds such as when the large pink-haired zombie gets shot, she makes pig squealing noises. I found it funny that outside of the gates of every level is an even bigger crowd of zombies lying in wait. Even funnier is that at the end of every level, the character has to go to court and get acquitted again.

On the surface, Acquitted looks to be a fairly easy game that’s only meant to poke fun at one side, but the experience becomes significantly more difficult in a rather short amount of time. In as little time as level 10, you’ll be fighting hundreds of zombies in total with non-existent downtime during the levels. The braindead are numerous and will easily swarm you if you let up for even a second. The boss zombies will also become plentiful and their large bodies when slain can block off access, presenting both a positive and negative as it can reroute zombies, but prevent methods of escape for you. When you get around levels 21 and above, you’ll really have to think quickly and make split-second decisions to win. 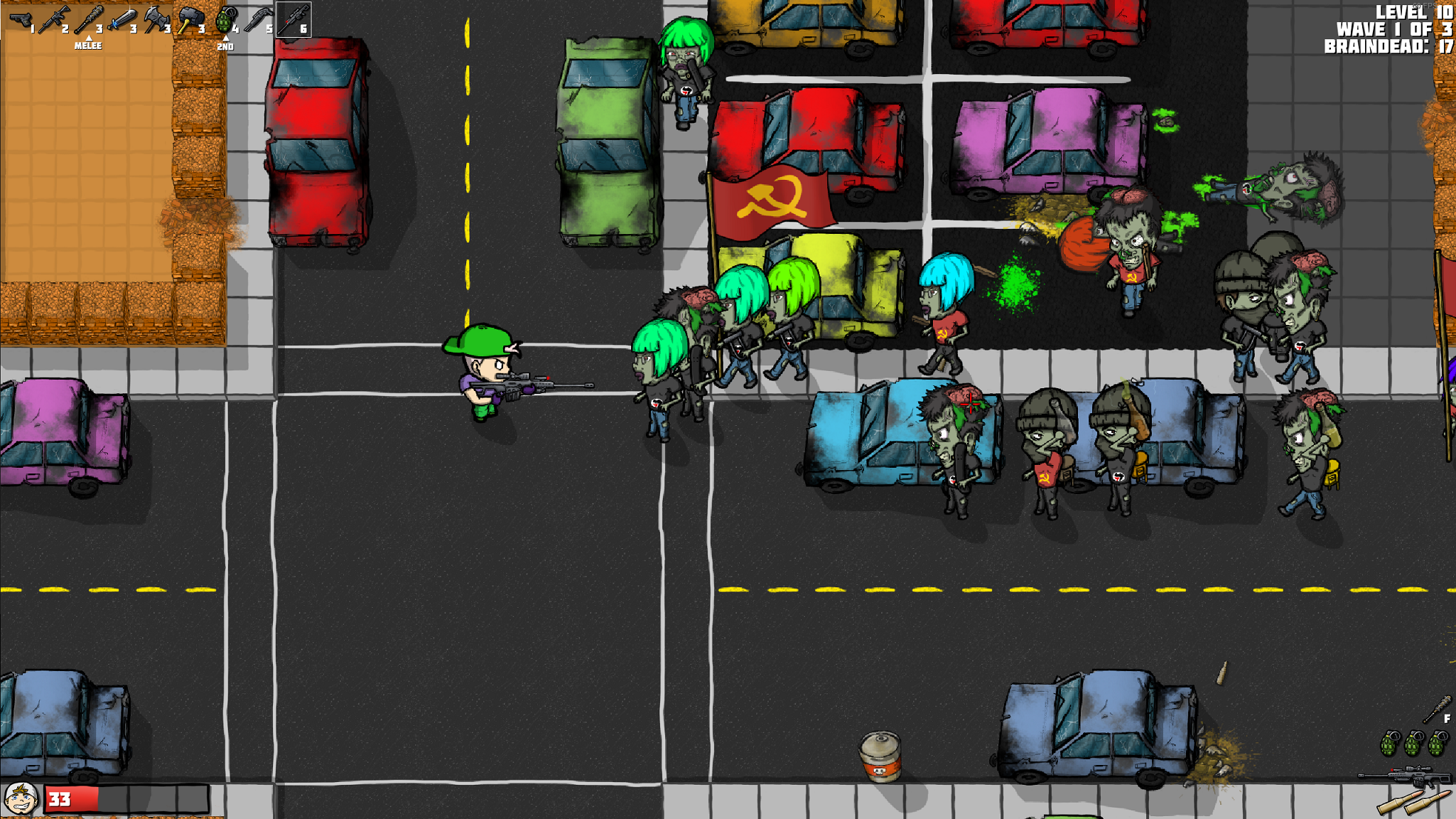 I mostly like the visuals of Acquitted. It is a bit crude at times in terms of quality but manages to be a simple, colorful style reminiscent of an early 2000s Western cartoon or webcomic. The player character can be customized in terms of color from his hat, all the way down to his shoes.

Updates seem to be quick to come out as issues and oversights that existed on the first day were ironed out fast. One of my previous complaints was a bright flashing red every time your character was hit which can be very obscuring. It has since been significantly toned down to a low red flash around the edges of the screen.

Even if Acquitted is satirical in nature, it still stereotypes certain groups of people, such as the ridiculously fat pink-haired zombie. She, in particular, is very unflattering to look at as she wears a nasty-looking thong and no bra so her banana-shaped breasts are always to the side. Talk about fan disservice. Now the huge muscular man in a dress, whether that is meant to represent a transsexual—I’ll leave that up to you to interpret. There is blood present with accompanying gore, although all the blood is green. Some enemies throw bottles of pee at you that obscure your vision.

I haven’t completed all 100 levels as the game’s difficulty is brutal, but I do feel I played enough to have an appropriate review. Acquitted is simple satirical fun that’s easy to get into. Not everything is meant to be some deep philosophical insight into a subject. This is best played in 30-minute to one-hour intervals and proceed to come back to it every once in a while. Keep in mind that the difficulty ramps up quickly. I’ve been mostly avoiding the subject throughout and given the subject matter and what Acquitted is satirizing—I can only sidestep what it all means for so long. If you happen to (heavily) disagree with “a specific verdict” made in November of 2021, you will most likely not enjoy this. If you're unable to laugh at a game poking fun at liberals or anarchists, you will not enjoy this. Outside of the political spectrum, it contains the typical zombie violence and whatnot. As I found this title quite enjoyable, I am looking forward to what Nordic Empire Games will release next.