Thank you Gamers Gate for sending us this game to review!

The King Arthur Collection consists of the main game (King Arthur: The Role Playing Game), The Saxons expansion, The Druids expansion, Knights and Vassals DLC and the Legendary Artifacts DLC.  This bundle carries a $29.95 price tag and offers many hours of single player game play.  There is a multiplayer button, but it's disabled on my GamersGate version.  The Steam version is up to 1.07 while the GamersGate version is currently at 1.06.  Since my product code cannot activate on Steam I can’t report if the multiplayer works or not with the newer Steam version.

The single player campaign puts you in the place of Arthur, the son of Uther Pendragon, who should fulfill prophecy and secure his rightful throne by conquering all of Britannia.  You must find and gather Knights of the Round Table and choose which faith you’ll follow: either Christianity or the old druid faith.  Each faith has their own unique benefits and powers to offer your knights and soldiers.  Powerful relics are scattered across the lands and if you can defeat or smooth talk them into your possession you’ll have an advantage in the upcoming battles.

The battles are done in a 3D real time strategy view where you select and give orders to your units.  The units have different strengths and weaknesses.  For example, cavalry units are slow in wooded areas and archers are weak to getting trampled by horses.   If you miscalculate a weakness you’ll suffer heavy losses.  Winning a battle typically consists of defeating all enemy units or securing and holding all of the victory locations.  Some battles let you pick the location, while others are complete surprises, so it helps to have a variety of units to take advantage of all of the terrain types.

Weak Points: Enemy strength is unpredictable no matter what difficulty you’re playing at.  Multiplayer is unavailable in the GamersGate version.

Moral Warnings:You’re either fighting for Christianity (think crusades) or for the pagan/druid faith; magic is heavily used and you’ll find occult symbols (pentagrams).

The soldiers and the heroes (knights) that lead them gain experience by winning battles.  When the soldiers level up, you can increase their attack, defense, stamina and loyalty.  They can also learn abilities , but they are limited compared to the ones available to the heroes. The heroes can gain and use various powers depending on their personality and religious views.  Some of the abilities they can learn are healing, magic resistance, rage, invisible wall (shield from incoming arrows), lightning and fire spells and more.  Some abilities allow you to change the environment to more favorable conditions, including changing it to night or summoning a fog to make it difficult for archers.

All of this strategizing and excitement can easily be skipped by letting the computer decide the outcome using the auto battle , button.  If the odds are greatly in your favor this can save time, , but if the enemy is close in strength you can probably salvage units by fighting the battles manually.  While the units can be replenished in towns, totally wiped out units lose all of the experience and upgrades that you put into them.

When an army is defeated, the hero will be imprisoned or leave your service.  To keep them loyal, you can award them fiefs or give them a maiden to marry.  As a female gamer, I’m not too keen on seeing women handed out like trading cards.   Not only can you give maidens to your knights, they can also be used as bartering tools to ransom back your knights or trade them for a relic.  Seriously, how did this work back then?  “I’ll give you a blonde with blue eyes for a brunette and a sword”? 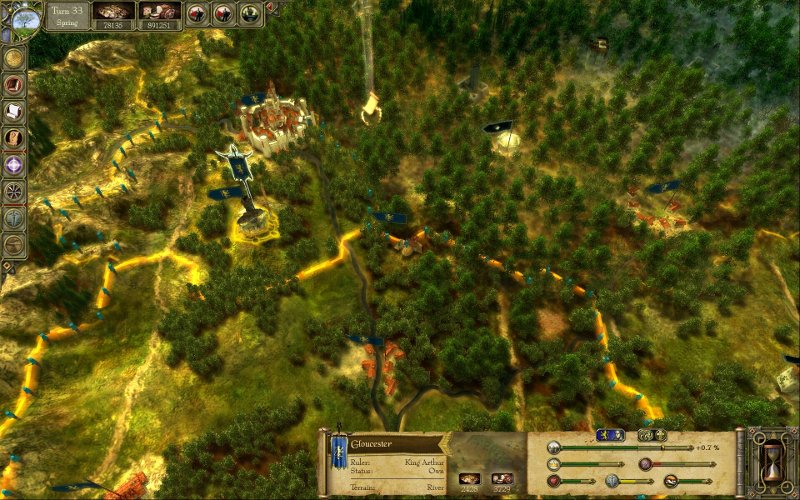 I’m glad to see marriage being respected and sacred , but you do have an option to have sex outside of marriage in one quest.  *spoiler *It pays to wait*/spoiler*   Christianity is represented , but not shed in the best of light since war should not be used as a tool for evangelism.   The Christian faith does have some awesome guardian angel units that are ultra powerful.  If you decide to wave the druid banner, you can use Stonehenge monuments to warp to various areas of the map that you control.  The wood faeries also leave you alone so that’s a bonus as well.  The druids heavily use magic, and pentagrams are used to represent their magic abilities.  With wargame in the title, violence is a given , but it can be skipped if you use the auto battle feature.

The game difficulty is hit or miss in this game.  Sometimes the enemies are pushovers , but other times they are two to three more times powerful than you.  Each army has a rank that can be viewed to see how powerful they are in the nation.  If your army is too weak to take on the next foe, you have a few options.  You can disband your weak units and recruit strong ones, or gain experience and level up.  You can have up to four heroes in an army unit.  Make sure they are compatible on religious beliefs before merging them together.  Disunity will lower the morale and effectiveness of your army.

Recruiting units takes time and King Arthur does have turn based elements in the forms of movement and seasons.  Each unit can move a certain distance per season, when all the movement points are spent, you have to end your turn to change seasons and let the computer take its turn.  In the winter season everyone stays in their tents to keep warm.  This is the only season where you can upgrade your strongholds and spend your research points to unlock new technologies and abilities. 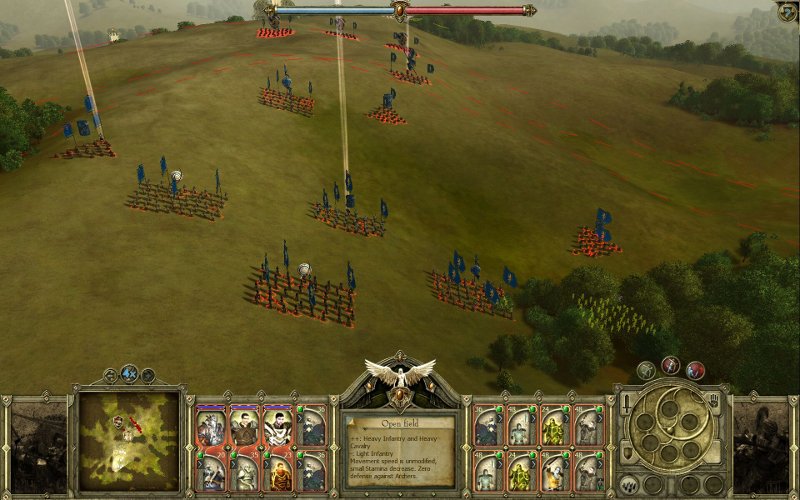 Some of the upgrades will add health to your armies, add defenses to your strongholds or increase the gold and food produced from the villages.  Each unit has a maintenance cost to recruit and maintain.  The better the unit, the more they cost and the longer it takes to recruit them.  Once you own all of the provinces and conquer the opposing forces you will beat the main campaign.

The Saxon and Druid Expansion packs are glorified scenarios that allow you to determine the winning conditions.  Many of the hero knights and artifact quests are recycled , but the opening and winning trailers are new.  The voice acting was good but again, as a female gamer, I felt slighted here.  You can recruit female heroes to lead your armies.  Whenever you select a male led unit you’ll hear something like “Yes m’lord”, “Yes my liege” or “As you wish”.  When you select a female led unit you hear nothing.  I found that a little bit odd.  On a positive note, the Celtic music was good and often got stuck in my head.  Having the music fade out instead of abruptly stopping and going to the next rack would have been a little bit more polished in my opinion.

I have no complaints when it comes to the visuals.  When starting a battle, you’ll see a flyby of all of the victory locations.  Once the battle starts, you can zoom in and out to see all of the detail and fighting going on.  You can see blades of grass or swarms of units attacking each other.  I don’t recall seeing any blood or bodies in battle.   The units themselves all look the same , but the movement animations look believable.  The knights for the most part are unique in appearance, and to keep track of them, they have a beam of light shining on them at all times.  I’m assuming that’s to benefit the player and not the enemy armies.  ;)

Overall, I found this to be a fun , but an unbalanced game.  I did resort to using cheat codes to give me more bread, gold and victories in battle.  When I cheated I had more fun.  With the glorifying of magic and the crusades I don’t recommend this game for everyone.  I like how they blend RTS, RPG and turn-based elements so that anyone who enjoys those kinds of games will probably appreciate King Arthur: The Roleplaying Wargame.  Women on the other hand may feel like a second class citizen after playing this.