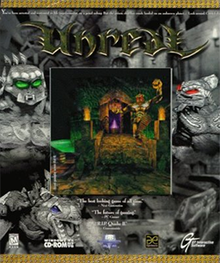 It was to be the Doom-killer; the game that would finally unseat the then-undisputed masters of FPS gaming: the men and women of id software. But to those who played it, Unreal was surprisingly unoriginal, lacking in both innovation and imagination. Its gameplay was uninspired, its story was a confused mess, and its missions were hopelessly simple. Even today, Unreal is remembered as one of PC gaming's biggest could-have-beens, a game that had everything going for it but somehow missed the mark.

Unreal begins in the middle of a prison cell, literally. Your character is Prisoner 849, a nameless felon aboard the prison ship Vortex Rikers, a rundown vessel with a cargo bay full of unruly and restless convicts. The ship is transporting its dangerous cargo to a prison colony on the other side of the known galaxy, a normally uneventful trip of considerable duration. But all is not right on the Vortex Rikers. A sudden increase in prisoner fights has stretched its medical facilities to capacity, and with the ship low on supplies, the captain makes the decision to take a shortcut through an uncharted star system. Everything goes smoothly until the ship is suddenly and mysteriously ensnared by the gravitational field of one the planets. Despite the crews' best efforts, and unbeknownst to the inmates, the ship is dragged through space and before long comes crashing down onto the planet's surface. You awaken after the crash to the bloodcurdling screams filtering through the Vortex Riker's fractured decks. Something alien is in the ship and is hunting down those inmates and crew who survived the crash. You have only your wits and whatever weapons you can get your hands on to out-fight the evil force that threatens your survival. Along the way, you will fulfill an ancient prophecy one that foretells of a 'messiah' who will deliver a long-oppressed people from centuries of domination. As you make your way through the levels, Prisoner 849 will come upon various alien inscriptions, messages, diaries, and displays that he can decode with his universal translator. This is how Unreal advances the plot in other words, aside from the ending sequence, the game has no cut scenes of any kind between levels. I have to admit that I was pleasantly surprised by this system. It really adds to the overall suspense of the game and helps in drawing the player in to the story. Not even this innovation can completely salvage the confusing and somewhat muddled plot, however. With the messages always changing focus, I was constantly confused as to whether I was some 'messiah', an escaped convict, or just some unlucky guy who got stuck on the wrong planet. And with the complexities of the narratives in many other games nowadays, Unreal's plot comes off as being pretty bare. The developers had the right idea when they implemented the message/universal translator system, but somehow Unreal?s story misses that perfect combination of suspense, drama, and magic that could have created a truly compelling story.

Unreal?s gameplay can be summed up in three steps: 1. Find enemy, 2. Kill enemy, 3. Move on. For a game with as remarkable raw game quality as Unreal?s, you'd think that the developers could have moved beyond the basic Doom-style point-and-shoot deal to create this game. It was called the Doom-killer and rightfully so Unreal is just Doom with a new set of monsters and a new coat of paint. Unreal's level design is better than it's basic gameplay would let on but not by much. The levels themselves tend to be very linear, but the game's clever implementation of button hunts and underwater treks forces the player to take longer deciding than usual. Will this door be locked? Will it lead to a button, a goodie stash, or a dead end? Or will it just be another door between me and the end of the level? Once you figure out Unreal's level secret, though, it won't take you long to see just how simple Unreal's levels really are. Needless to say, it doesn't take a genius to figure the game out, and Unreal's puzzles won't stop even the dumbest gamers out there for much longer than a few minutes. In Unreal's defense, it has excellent atmosphere. The developer's admirable use of the Unreal engine's superb graphics and lighting abilities gives the game a very dark, surreal (almost unreal!) quality to it. One of the last levels, especially, called The Darkening, I'll always remember as one of the creepiest, most suspenseful levels that I've ever played. Another area that Unreal scores is in its weapons. Each weapon is imaginative and powerful in its own way, but is especially deadly in a certain application. One example is a weapon called the razorjack, an alien hunting implement that fires sharp metal disks that ricochet off solid surfaces. This accurate weapon can dish out considerable amounts of damage to single foes by simply shooting them in 'conventional areas', but aim for the neck and...well, you get the idea. Off with his head! Even your first gun, the wimpy dispersion pistol, receives upgrades as you move through the game, increasing its charge capacity and shot power. By the end of the game, the dispersion pistol is a hulking juggernaut of a gun, capable of an enormous amount of damage. In the end, playing with Unreal's weapons provided a nice distraction from the rather simplistic gameplay.

For those who remember, Unreal's greatest selling point was its next generation graphics, and even now, four years later, the game is capable of some truly breathtaking scenery. But the game is four years old, mind you, and still tends toward the blocky and slightly pixelated side when compared to more modern shooters.

Unreal's sound is actually quite good, with a nice feeling of depth and authenticity when experienced. All in all, it adds nicely to the game's already superb atmosphere. The various sounds made by Unreal?s many monsters are especially well done.

One of the game's substantial highlights is its multiplay, even though it tends to be overshadowed by its younger (and far more popular) cousin, Unreal Tournament. In fact, Unreal, in my opinion, is what really started the Unreal franchise's strong tradition in multiplay. With its Return to Na Pali Mission Pack, the game has nine multiplayer modes and sixteen maps, all of which are intricate and creative. The games are easily customizable, and a single player botmatch is available for all those who want to become familiar with the various maps or who just need some practice the bots are actually quite capable. Multiplayer for Unreal is available through Gamespy Arcade as well as through the game's own server menu. The game is now so old, however, that finding a game is a tricky proposition.

The original version of the game had a variety of bugs and stability issues, a factor that hurt the game's initial popularity. But nowadays there is Unreal Gold, which not only comes with the Return to Na Pali Mission Pack but also with the full array of patches and fixes. The only issue I had was that, during the Return to Na Pali missions, saving over other games would occasionally corrupt the new saves, forcing me to either reload an earlier save or use a cheat to start the level over again (note that this only seemed to happen in the mission pack). Overall, the game was very stable.

Where does Unreal stand on offensive content? The most obvious problem is the violence and gore. Let me say that Unreal is a very violent and bloody FPS. There. I said it. All you anti-violence people may now wail in dismay. For those of you tough enough to make it through that sentence (which means just about everybody), you probably already know that you have to take that statement with a grain of salt. Unreal's violence is rendered in 1998 graphics technology, meaning that blood is portrayed as a spray of small red squares and that dismemberment means a bunch of bouncy, angular fragments that are each roughly the size of a boom box. The only aspect of Unreal?s violent nature that could really be construed as disturbing (disturbing or funny, depending on who's watching) is that little thing about decapitation that I mentioned a little while back. Also, dead bodies tend to be used pretty frequently as props, and they can get pretty gruesome sometimes - depending on where they are, that is. With the blood and guts aside, Unreal sees God's name taken in vain and swearing on occasion usually in the many messages that you need to read throughout the game. Also, some of the skins for the game are females who are usually wearing something rather revealing. I wasn't sure if this would concern anyone, but I decided to mention it anyways. Throughout the game, the player will encounter a peaceful alien race called the Nali. The Nali are being oppressed by the bad guys, and to reflect this, you sometimes come across Nali being executed on cross-like devices that also seem to possess a certain religious significance for them. The Nali religion seems to be something of a combination of Christianity and the religion of the Ancient Greeks, with a little Eastern mysticism thrown in for good measure, and the aforementioned cross-like device features heavily in it.

And the final verdict for Unreal is...well, I'm not sure what the final verdict is. Unreal has its good points, and it has its bad points. For those of you looking for a shooter with lots of action and atmosphere, Unreal will deliver. For those of you looking for something slightly more cerebral, look elsewhere. Unreal is an old-school shooter for old-school shooter fans.

Gameplay: B- Interface: B+ Graphics: C+ (based on modern standards) Sound: B+ Story: B Stability: B+ Offensive Content: D

Author's Lean: B (Upsides: fast-paced action with great atmosphere, cool weapons, good sound, strong multiplayer component, it's cheap; Downsides: Extremely simple, almost repetitive gameplay, plot presentation leaves much to be desired, graphics showing their age, touchy for offensive content; Conclusion: Fun, but nothing terribly impacting. With all the graphically awesome FPS's that are out these days, Unreal is little more than a distraction a play-through-once weekend diversion that somehow lacks the innovation that would have earned it the distinction of instant classic.)