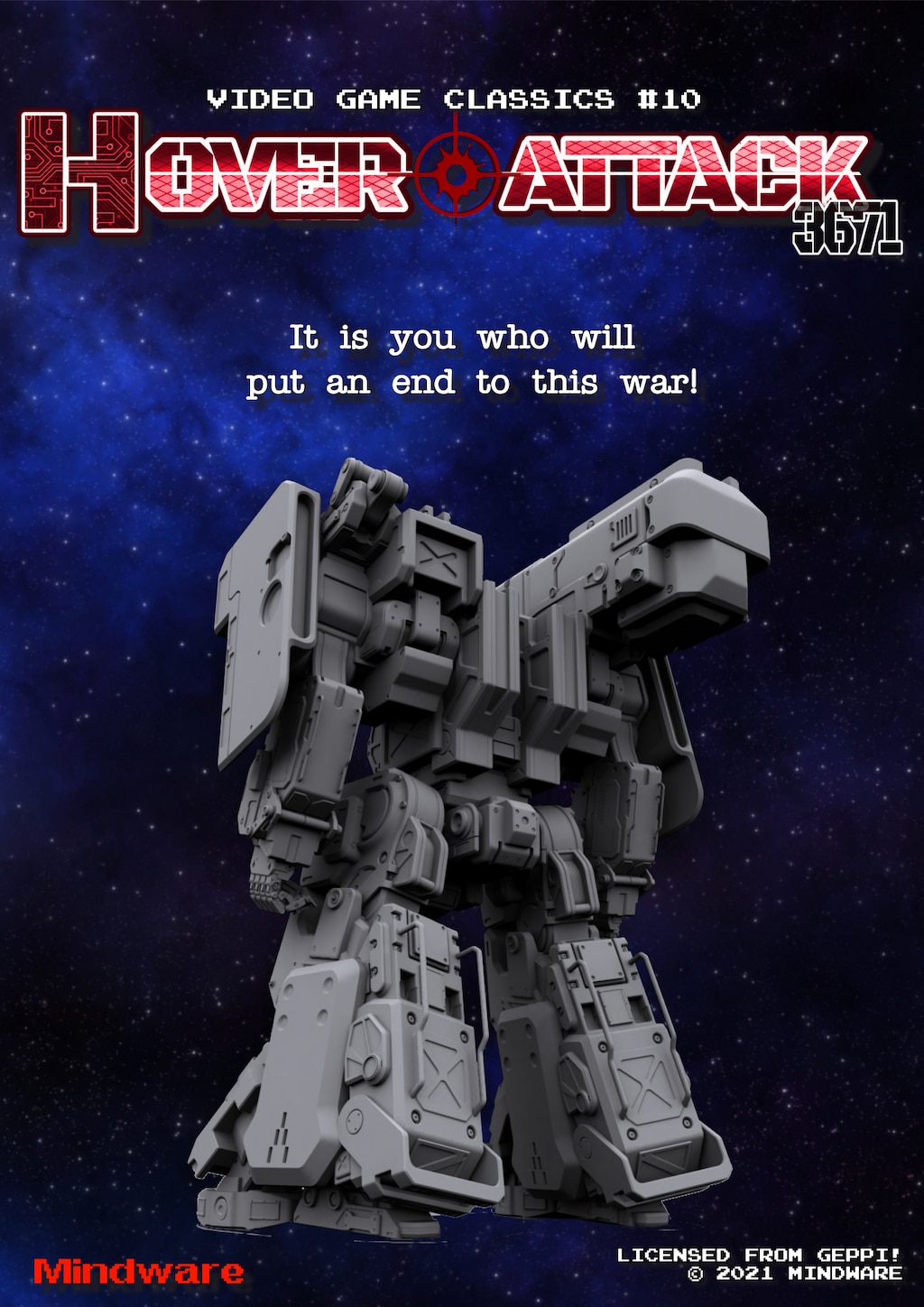 Thank You Mindware Co., Ltd for submitting this through our Steam Curator

I doubt that some of the older people potentially reading this has ever heard of this one before. Developer Mindware Co. has been remaking a lot of classic Japanese arcade/computer games, and this dates back to 1984. Hover Attack 3671 is both a remake and pseudo-sequel of 1984’s Hover Attack. As to why it’s called 3671, those numbers stand for the developer’s birthday being March 6, 1971 as the true translated title is too long for Steam guidelines. The genre of Hover Attack is somewhat difficult to pin down. Some parts 2D platformer, other parts run-and-gun, and yet completely unique compared to anything before and after.

The objective of Hover Attack is very simple. You have to reach the target and destroy it with your missiles. Where things get different is apparent almost immediately starting the game. The player controls both a carrier and an attacker, each with its individual health number. If either entity loses all of its health, it is considered a game over. The attacker can pilot the carrier moving it around the maze and cave-like areas although it has limited vertical movement. To make up for this, the carrier can shoot an unlimited, but a very short range of missiles. The attacker can debark the carrier and move around the area with much better horizontal and vertical mobility. In contrast, the attacker has a longer range limited number of missiles that can only be replenished by finding missile pods on the map or going back to the carrier. Even if the attacker is moving on their own, the carrier is still susceptible to damage, so keeping it away from enemies while you explore is ideal. 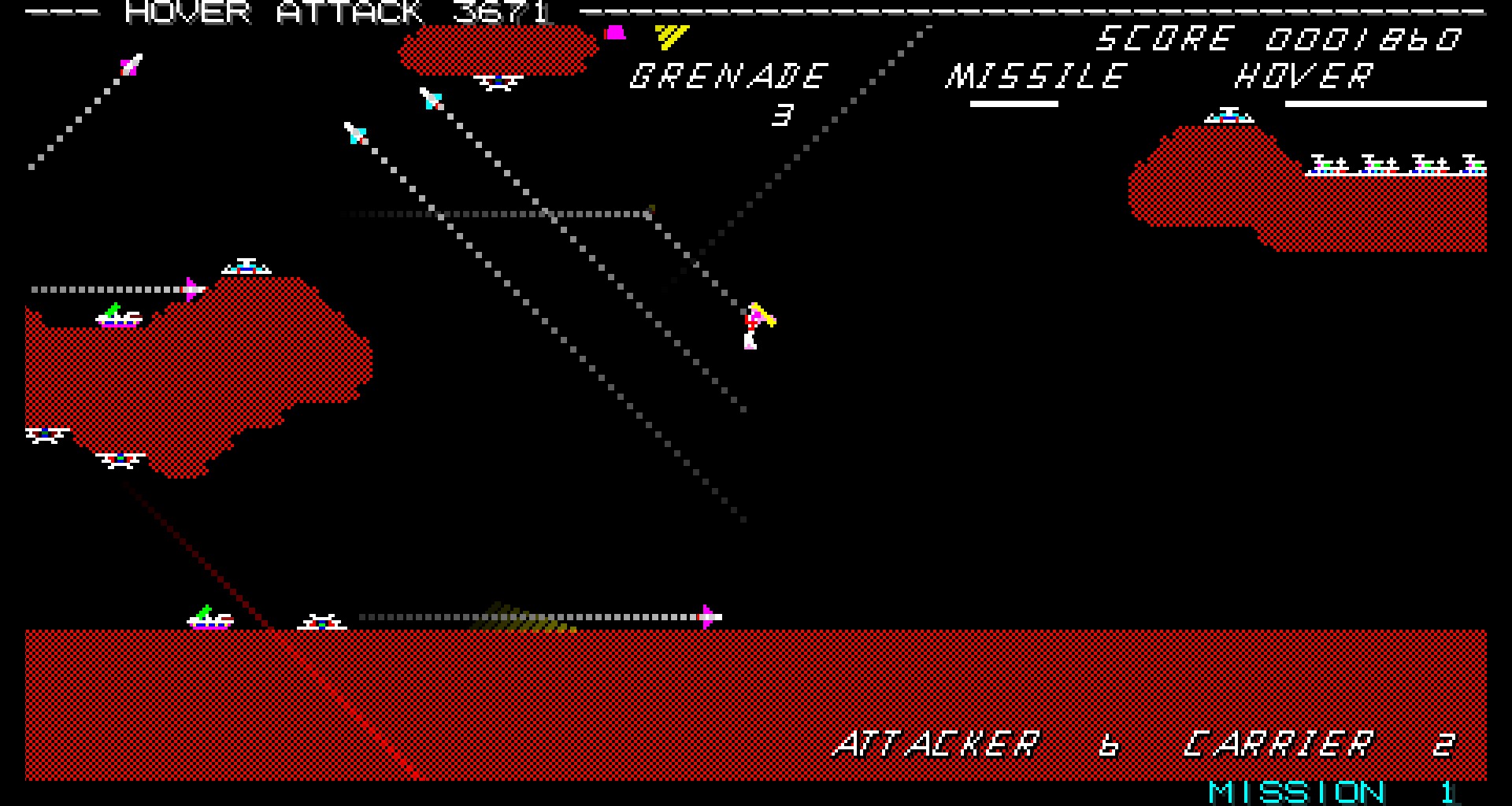 Now the most unique aspect of Hover Attack is that no matter what, your character will always be aiming to the left of the screen. Similar to shoot ‘em ups, without the auto-scrolling. Your method of aiming can only be shot through angles, with (at least on a controller) represented by the face buttons. For example, on an Xbox controller, pressing Y will shoot your missiles upward at a 45-degree angle. Pressing X will shoot them straight, and pressing A will shoot them downward at an obtuse angle. I will admit these controls will take some time to get used to as they are a bit sensitive at times. The attacker has the ability to either run or backdash by double-tapping left or right. Sometimes, I mistakenly did it when I didn't want to. On the other hand, the earlier levels are simple enough for most players to get the hang of it.

The later levels begin to get more and more labyrinth-like with alternate paths, secret areas, and tons of vertical movement. You’ll eventually even be forced to loop around (simply reach the edge of the map) to access areas you otherwise couldn’t to shoot down the target. Combined with the limited field of view and you may end up getting lost in these areas. In a tongue-and-cheek manner, the developer described this game in our Steam Curator as “the original Metroidvania” and there is some merit to this statement due to the level design. Also in Metroidvania fashion, there are permanent upgrades to your health if you bother to explore, although health upgrades are considered separate for each of the four playable characters. That can be a little annoying because it encourages you to stick with one character. The characters themselves have small differences such as the number of missiles they can carry before having to refill them or even special abilities such as enabling a map of the entire area or trading carrier health for attacker health. 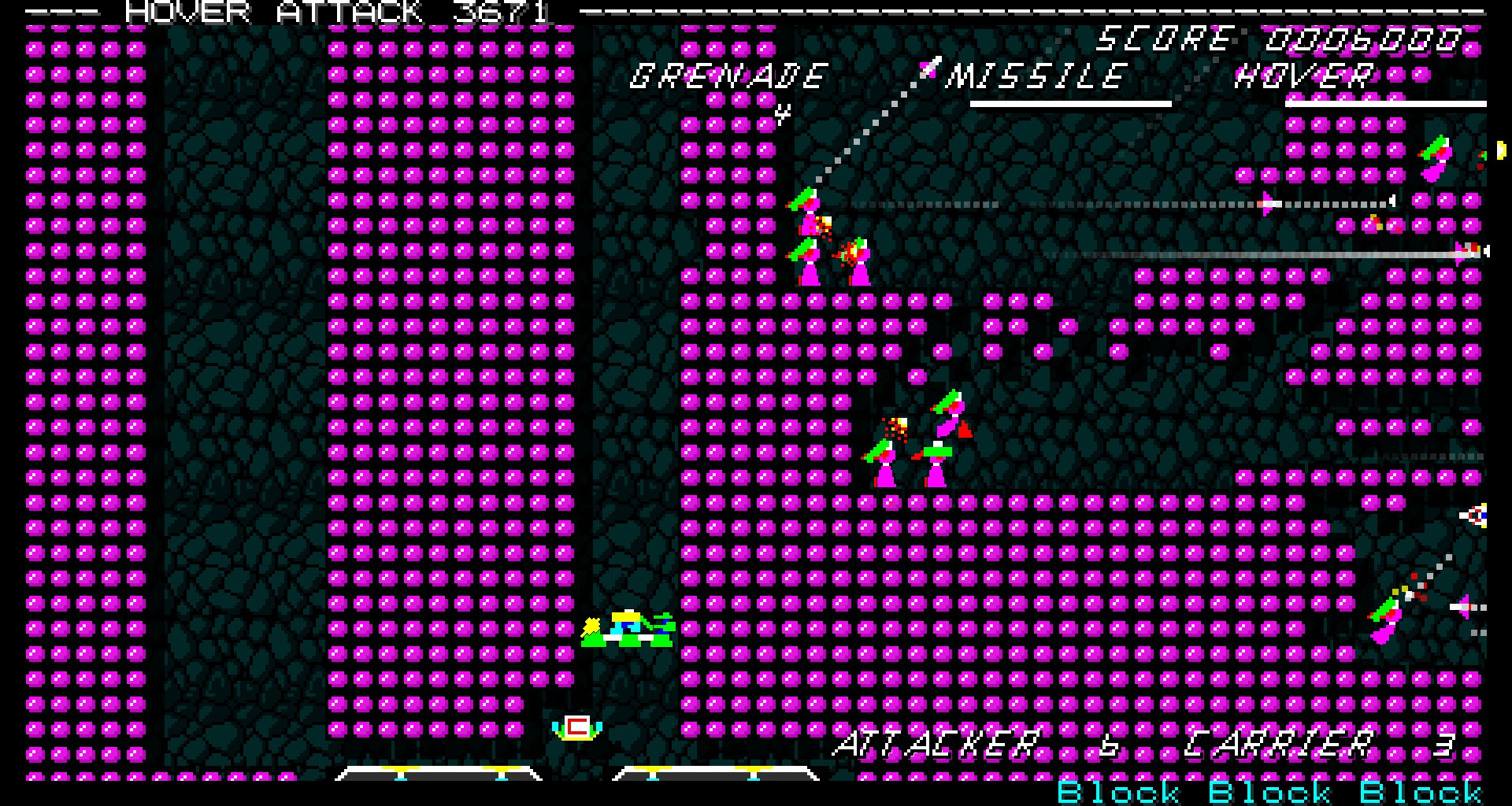 Compared to the original, 3671 boasts a more colorful pallet and much smoother animations. Everything is still sprite-based. It still has that retro feel while also clearly being a modern product that would have extreme difficulty running on the hardware of that era. The music and sound design also follow that same inspiration. A lot of the beats are either very energetic and high-strung or tense and slower-paced.

Beyond the 16 levels featured in 3671 mode, there are also the 20 original levels from the 1984 classic, arranged versions of said levels, and a custom mode. The custom mode lets you make your own levels as well as access levels that others have made through user mode. Hover Attack is fairly forgiving if you simply want to beat the levels as when a game over happens, you get the option to continue with every enemy you destroyed prior staying destroyed, but with your score reset to zero. As it is a remake of a classic, the main draw is to reach a high score and where the majority of replay value comes from.

Hover Attack may be an oldie of a nearly forgotten era, but the unique concept manages to still be a goodie. I found this remake to be a lot of fun with a nice learning curve. The only moral warning to be concerned with is robot violence and explosions as any form of plot and dialogue are non-existent. The price might be considered expensive to plenty but for a person who can appreciate how video games started and replay their catalog often will most likely feel right at home with this entry brought into the modern era.