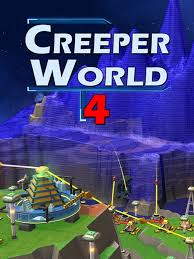 Tower Defense games have never really agreed with me, but in 2009 Knuckle Cracker’s first Creeper World game challenged that assumption. Back in 2020, Creeper World 4 released, and I was happy to dive once more into the only series of tower defense games that has ever enraptured me.

The story is very much a B-movie tier plot, and the game unapologetically revels in it. It’s the eve of the activation of the Rift Lab, a glorious floating city that promises to revolutionise technology. Suddenly, blue crystals rain down from the sky and begin emitting a blue liquid as they land, destroying everything in their path. The rest of the story sees you teleporting to new locations, staving off defeat with a tower defense operation, and recovering ancient technologies to expand your arsenal against the Creeper. The 20-hour story here mostly stands alone from that of the first three games, but integrates neatly into the larger canon. After you finish the campaign, there is a robust set of challenge missions and a fairly robust random mission generator.

Creeper World’s titular enemies are what distinguishes the series from other games of the genre. The Creeper are not just discrete units that move from a start point to an end point. Instead it is primarily a liquid that drips, ripples and pours through the landscape in very much the same way you would expect a viscous liquid to flow. In addition to the liquid that makes up the bulk of your opposition are spore emitters that fire off aerial bombardments (analogous to air units) and various types of critters that must be handled in different ways. The Creeper are every bit as relentless as the game’s synopsis indicates, and you’ll spend the first few minutes frantically scrounging up a makeshift defense, followed by a gruelling hour of slowly reclaiming the map from the blue wave. 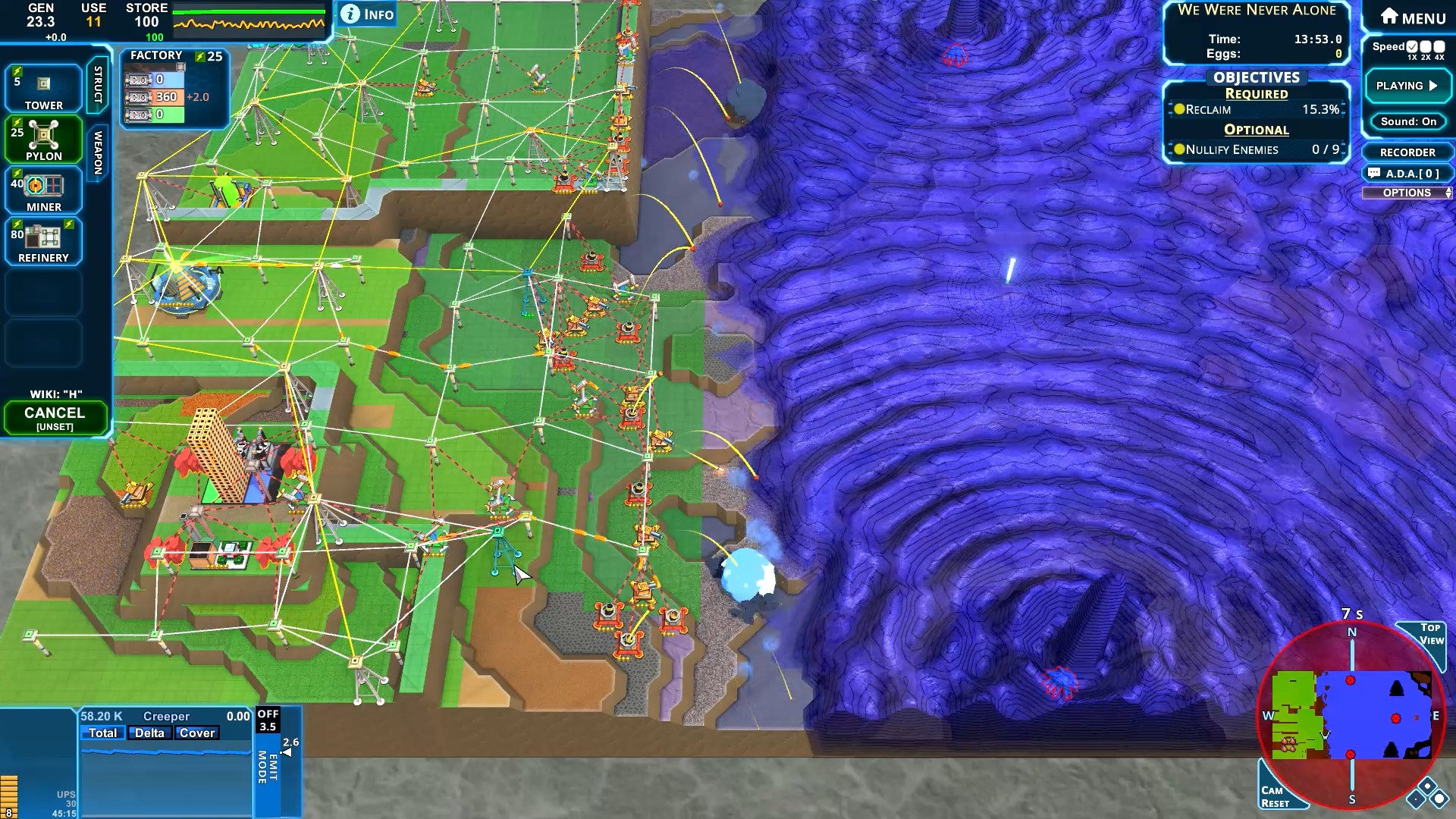 Your arsenal is likewise well equipped to handle all the liquids and enemies that advance upon your position. Creeper World definitely leans towards the real-time strategy roots of the genre, as you spend the first minute or so setting up your economy. You’ll devote a small area to building your base and key research and production facilities, but the game doesn’t dwell on this. As you expand your network of buildings, you’ll primarily find yourself building more weapons to engage the Creeper.

Laser Cannons are efficient at staving off a trickle of Creeper, while Mortars vaporise heavier swells. These two towers form the backbone of your defense. Missile Turrets handle air units, and Snipers handle the various rarer but very dangerous ground units. Sprayers attack with Anti-Creeper, a white-coloured good twin to the Creeper, and they’re very good at fortifying your position. If your economy really starts to churn a profit, you can also build Bombers to rain destruction deep inside the ocean of blue. Even the terrain is at your beck and call with the power of Terps as you terraform the landscape to sculpt the flow of the Creeper. Each tower has a clear and obvious use, as opposed to the complex upgrade paths and hybrid uses you might see in other titles. Another major difference here is that your towers are mobile. Once you’ve created an opening, you can advance with a group of turrets, and the dynamic likewise changes from tower defense to tower offense.

I’ve realised as I’ve played through the series that Creeper World is not a tower defense that starts slow and ramps up. It is instead a tower defense that throws you into the thick of it and challenges you to dig your way out. If, like me, you detest the painstakingly slow buildup of traditional tower defense games, then Creeper World might very well be your cup of tea. The change from defense to offense is another dynamic that will probably appeal to players that have mostly sworn off tower defense. While every mission starts with a bit of turtling, the decision of how fast to switch to an offensive stance is mostly in the player’s control. Another thing I like about the Creeper World games is how deceptively simple the mechanics are, like an Euro board game that has stripped all the clunky mechanics out, leaving only a well oiled machine. 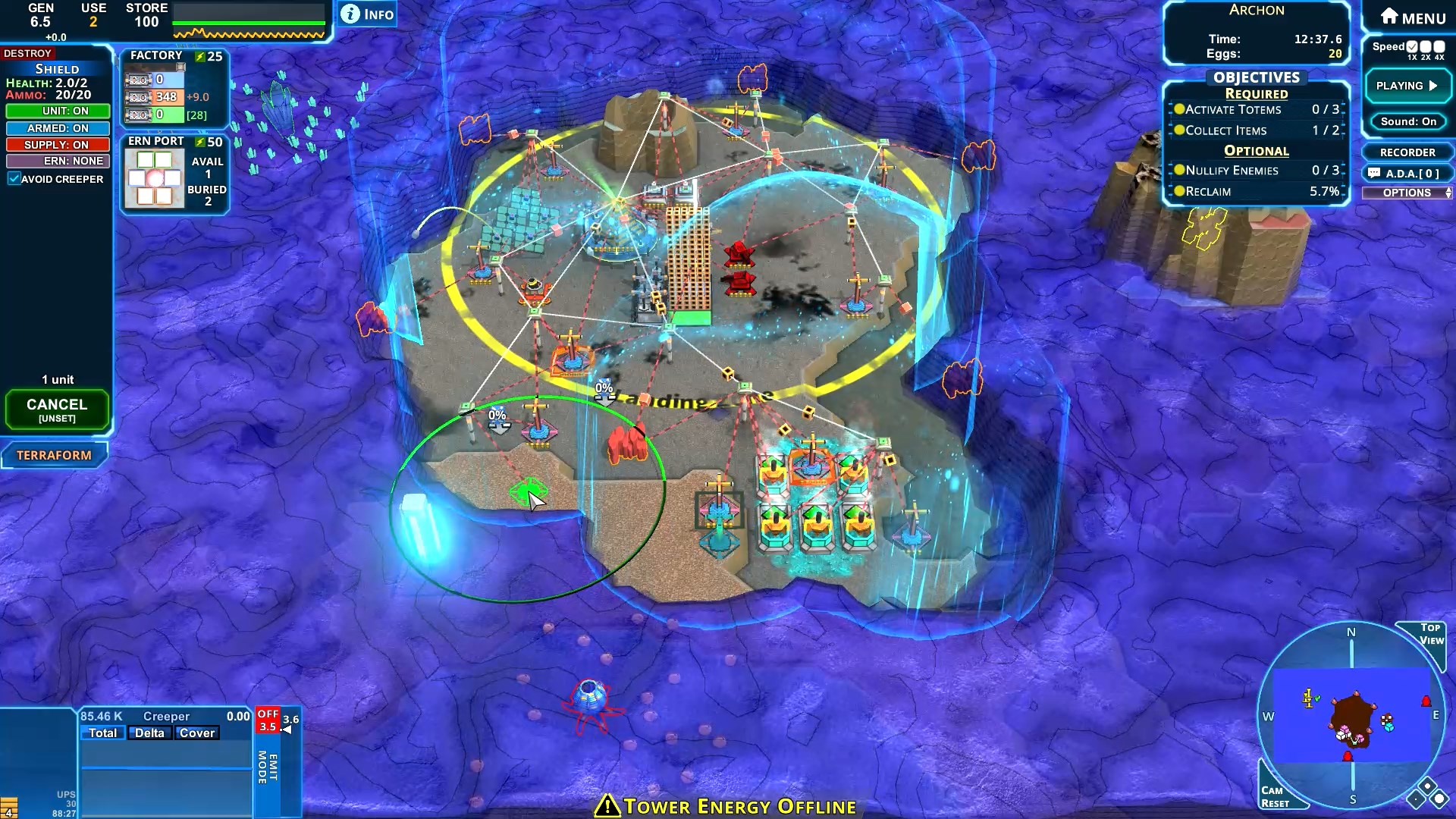 I found the default controls a little clunky, but fortunately almost everything can be re-bound to whatever buttons or keys you want. Graphically, the game is fairly simple. All buildings and units are composed of simple geometric solids, the landscape is simple and blocky, and the Creeper is a translucent mass of blue. It’s entirely functional though, and the in-game interface has various options to alter the graphics for readability. The sound effects of the various weapons have a satisfying punch, but are appropriately subdued. If you’ve played the first game, you’ll remember how loud and obnoxious Mortar formations could get. The soundtrack really shines through however. No matter which tune you’re listening to, the theme of desperate survival comes through loud and clear. Whether it’s a sombre memorial for the dead, an ominous foreboding of an entrenched enemy or a precarious tension like that of walking on eggshells, the relentless pressure of the Creeper is a presence everywhere and the music never lets up on that. Do you remember the insurmountable odds of Helm’s Deep in the Lord of the Rings movies, tinged with an inkling of hope? Imagine that on repeat, and you have an idea of the soundtrack.

Morally, there is very little questionable content in the game. There are laser cannons and mortars and bombers, but the enemy you fight is an amorphous liquid that throws out the occasional non-descript blob or random floating brain-shaped monster. The story is devoid of any questionable content, happy to revel in its melodramatic B-movie sensibilities.

Creeper World 4 is a unique tower defense game. Its mix of traditional base building mechanics while ditching the slow buildup remains a fresh take in a genre plagued with slow starts and slow buildups. If you’ve sworn off tower defences, I highly recommend Creeper World as a game to get you back into the genre.