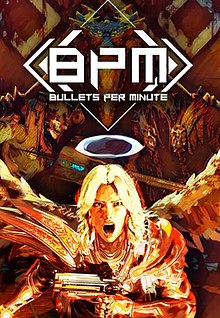 Thanks to Awe Interactive for sending us a review copy!

The earliest attribution for music is to Jubal’s strings and pipes in Genesis 4:21. In the millennia since, musicians have greatly expanded their library of instruments, including some… unconventional ones. Tchaikovsky’s 1812 Overture is famous for its daring use of cannons, and DJ B.a.r.’s seminal The CS Instrumental has also inspired many additional pieces. Extracting a rhythm from first-person shooters is old hat by now, but stuffing a rhythm game into one is a much taller order. 2020’s BPM: Bullets Per Minute might be the first game to harmonise the staccato of gunshots to a rhythm.

BPM: Bullets Per Minute sees you shooting your way through the various realms of Norse mythology to stop an underworld invasion. There is no story here, just an hour of straight, rhythmic dancing through rooms of bats, bugs, bots, and banshees in this mix of metal and myth. The core movement and shooting mechanics feel very much like an old-school 1990s-era FPS like Quake or Half-Life, but with an added scoring system, double jump, and dashing to spice it all up. Enemies also attack to the beat of the music, a subtle reminder that BPM is as much rhythm game as it is action. Expect anywhere up to 10 hours for your first successful run.

Bullets Per Minute offers various pistols, shotguns, rifles, explosives, and some more exotic weapons, but they all tie back into the rhythm mechanics at the core of the game. Firing isn’t a simple mashing of the trigger; shots must be timed to the beat of the music. Mistime your shot and you’ll hear an unexciting little clicking sound. Chain enough shots and dashes in sync with the music and your score multiplier increases. Even the reloading mechanics are connected to the music, with many weapons requiring two or three properly timed taps of the reload button. It’s not as elaborate or cumbersome as Receiver, but it’s just as satisfying to perform. In duet with your primary weapon are a range of magical spells to sling fire and brimstone on your enemies, and they have varied effects such as damage, bonus stats, teleportation, healing, and bonus treasure.

As you shoot your way through the procedurally generated levels and rooms, enemies drop coins and keys. Keys are used to open high-level treasure chests and access spellbooks, while coins are used to purchase items from the shops populating the dungeons. Every room also spawns a treasure chest when all enemies are defeated, and has a secondary treasure feature. These secondary treasures come in various flavours. Shrines to the various Norse deities accept a coin for a boost to your stats. Angel and Demon statues accept a random number of coins and keys for a random item or stat boost. Swords of Damocles sap some of your precious health for the promise of something more valuable. Triple Chests challenge you to test your luck and open the prize.

The equipment available is quite diverse and doesn’t simply boil down to stat boosts. You’ll still find items to boost your damage, range, precision, magazine size, luck, and speed, among other things, but BPM is not content with such lazy itemisation. All the helms, gloves, armours, and boots come with abilities that can warp the way you play. Most effects come in two or three variants across different possible slots, and they don’t always appear in the slot you’d expect. For example, the Spacewalker Gloves allow you to double jump infinitely, the Deadeye Lens improves the natural auto-aim, the Best Defense armour gives infinite ammo, and the Rhythmic Chaos Boots deal damage in time to the beat.

This legato of disparate mechanics results in a combination of two familiar feelings. On the one hand you have the FPS blood rush of gibbing monsters and enemies left and right. On the other, you have the glitz and glamour of being on stage. The metal music lends a credible nihilism to the impending Ragnarok, and tunnel visions you into a sense of “do or die.” It’s a subtly exhilarating feeling, if only you can feel the beat of the music and shoot to it. Perhaps the only disappointment here is that there’s no online leaderboard of any sort. 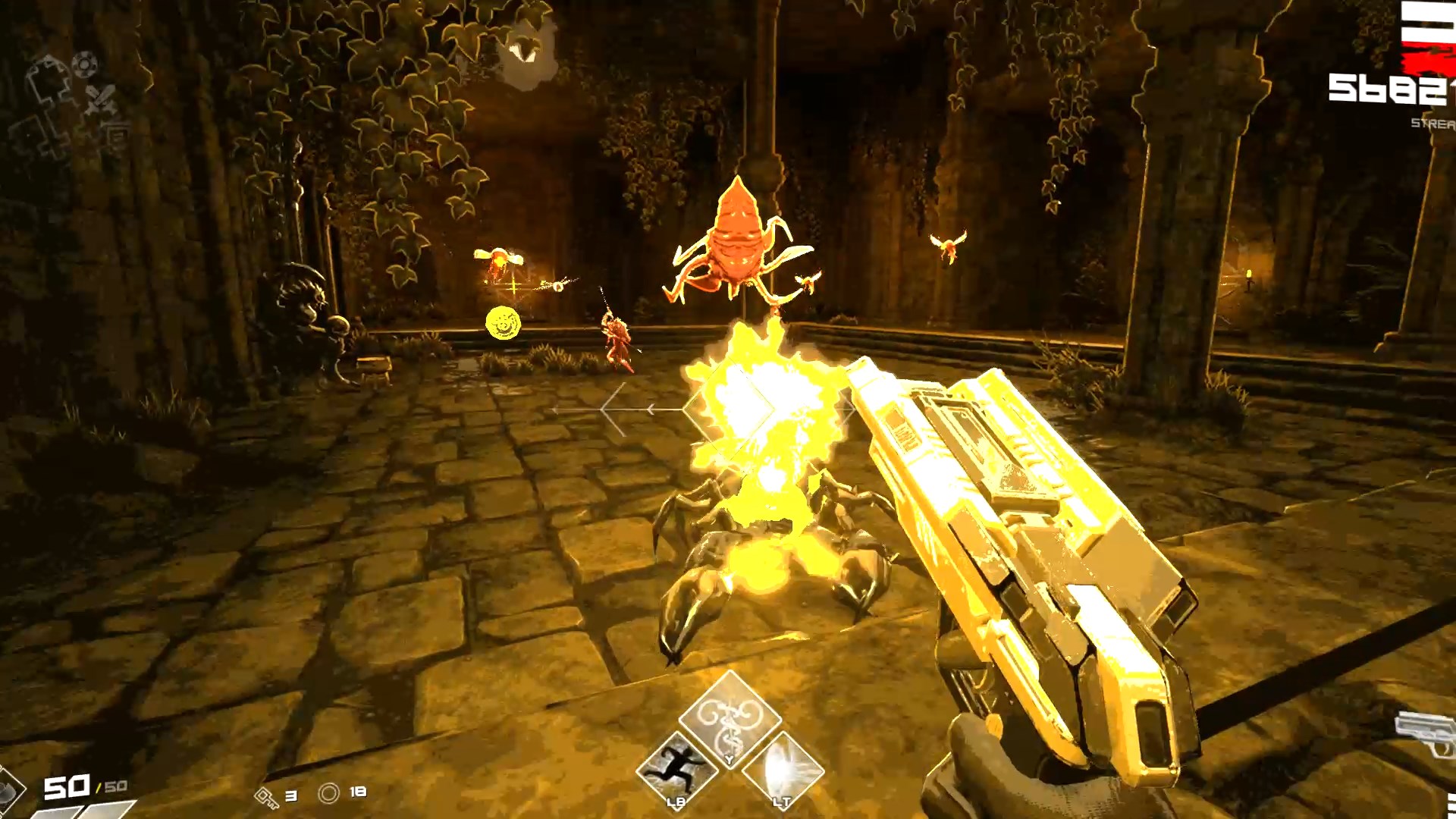 Once you are done with the standard game, BPM offers Hard and Hellish difficulties to up the ante. Past that, it also offers characters with unique mechanics. Odr pushes your skills to the limit by always dying in 1 hit. Skuld encourages aggression as she constantly loses health, pushing you to finish levels as fast as possible and often with sub-optimal equipment. Herfjotur uses coins as health, making many defensive items irrelevant and pushing towards a much more offensive build. These three characters offer up very interesting twists on the core experience, and Skuld especially will really teach you how to play the game at a higher level. And as if that wasn’t enough, BPM also offers unique challenge runs. The most unique challenge is Supertime, where time only moves to the beat, and it’s probably the only example of a turn-based FPS.

While the mechanics are solid, the aesthetics do fall flat in a few places. The graphics are technically solid, but I question the strict adherence monochrome palette. Enemies and room features constantly blend into the background. I think this is fine during combat, as it lends to the chaos, but not so much when scanning the room for shrines and loot. All the guns have short and punchy bangs, but a few enemies could have their attack wind-up sounds clarified. The music also has a few bars that are deceptive about the beat timing, and when that happens it’s annoying to have to re-sync the mental beat in my head.

In terms of morals, BPM is high on the violence as you’d expect from an FPS, but there’s no blood. Enemy corpses simply disintegrate unceremoniously. The game has no dialogue or text outside of the menus and loading screen tips, so language is not an issue here. Skuld is the only character that might warrant a sexual content warning if you stretch the definition, although her armour is nowhere near gratuitous enough to really be considered “bikini armour.”

BPM crosses all the supernatural borders. It draws heavily from Norse mythology, and the player makes regular use of occult magic spells to burn, curse, create objects, and summon creatures. Demons, Ice Witches, and glowing skull ghost enemies clearly draw from occult imagery. Finally, there’s a minor cultural with the music. Hillsong may be maligned by mainstream Christianity, but we can agree that God’s people are a musical people, as evidenced by our prolific use of hymns in Sunday services. The soundtrack for Bullets Per Minute is heavy metal, a genre that is heavily associated with demonic aesthetics, aggressive sounds, and nihilistic worldviews. No genre of music is more diametrically opposed to praising God.

BPM: Bullets Per Minute is an FPS that dares to combine with rhythm mechanics. If you enjoy both genres, or are looking for something unique, it certainly delivers on both fronts if you don’t mind the heavy occult themes. It's easy to squeeze in a quick run when you have an hour to spare, and there’s nothing else quite like it.