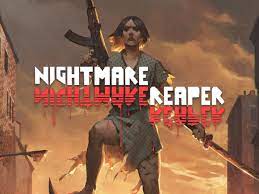 Thank You Blazing Bit Games for providing us with a review code!

So many retro first-person shooter (FPS) games coming out these days. Plenty of them are good while others are not worth talking about. Blazing Bit Games jumps into the fray with Nightmare Reaper—with an interesting premise for an FPS. It’s been in the works for about two and a half years as an Early Access title and is now fully released in 2022.

This FPS takes place within the mind of the unnamed female protagonist as she battles against all kinds of creatures. Gameplay is split between her sleeping where the action takes place, and being awake. Between her nightmares and restless moments, she can explore the hospital rooms to discover lore or unlock more areas for the arena mode. To access levels, she must go to sleep. How she ended up in the hospital in the first place is slowly fed to you through pages written by her doctor that appear after every completed level.

Her nightmares contain some roguelite elements, in that every level has over a dozen variations. Although from what I believe in your first playthrough, the levels will cycle somewhere between three and four. There were some levels I died several times and I would see the same four variants. The enemy spawns are semi-randomized as the types of enemies for the levels are always the same (until you reach new game plus) but where they spawn is sometimes different. The protagonist starts with a knife but can use dozens of weapons that she picks up from slain enemies and destroyed crates. Nightmare Reaper also takes “looter-shooter” elements in that every weapon has a rarity and level tied to it. The highest and rarest tier, legendary, is gold-colored and typically has three to four strong effects tied to it such as leech life chance, double or triple shooting, or increased fire rate to name a few. All levels have many enemies to kill, secrets to find, treasures to collect, and gold to collect. Completing all of these earns you bonus gold at the end of the levels. Most secrets are noted by cracks in the wall that lead to treasure. Some of them contain references to other games, movies, and even a couple of YouTubers.

Weapon levels range from one through three. Level one weapons are pretty simple and basic while level three weapons are especially powerful. In the beginning, you’ll only be able to keep one level 1 weapon at the end of every level but with the help of the skill tree, you’ll soon be able to keep up to two level 3 weapons at the end.

Every weapon, at least to me, is a joy to use. All weapons have a primary and secondary mode of fire. Some are basic with pistols and shotguns having an aim down sights mode, some get are more thoughtful such as enchanting your whip with holy energy to deal extra damage, and others are insane such as the chainsaw having a grappling hook or a black hole cannon that can even suck you in if you’re not careful. There are so many weapons to use that in many cases I had to ponder with what weapon I wanted to bring with me. The solid sound direction for the weapons also carries them too as there’s a lot of power behind each sound effect. 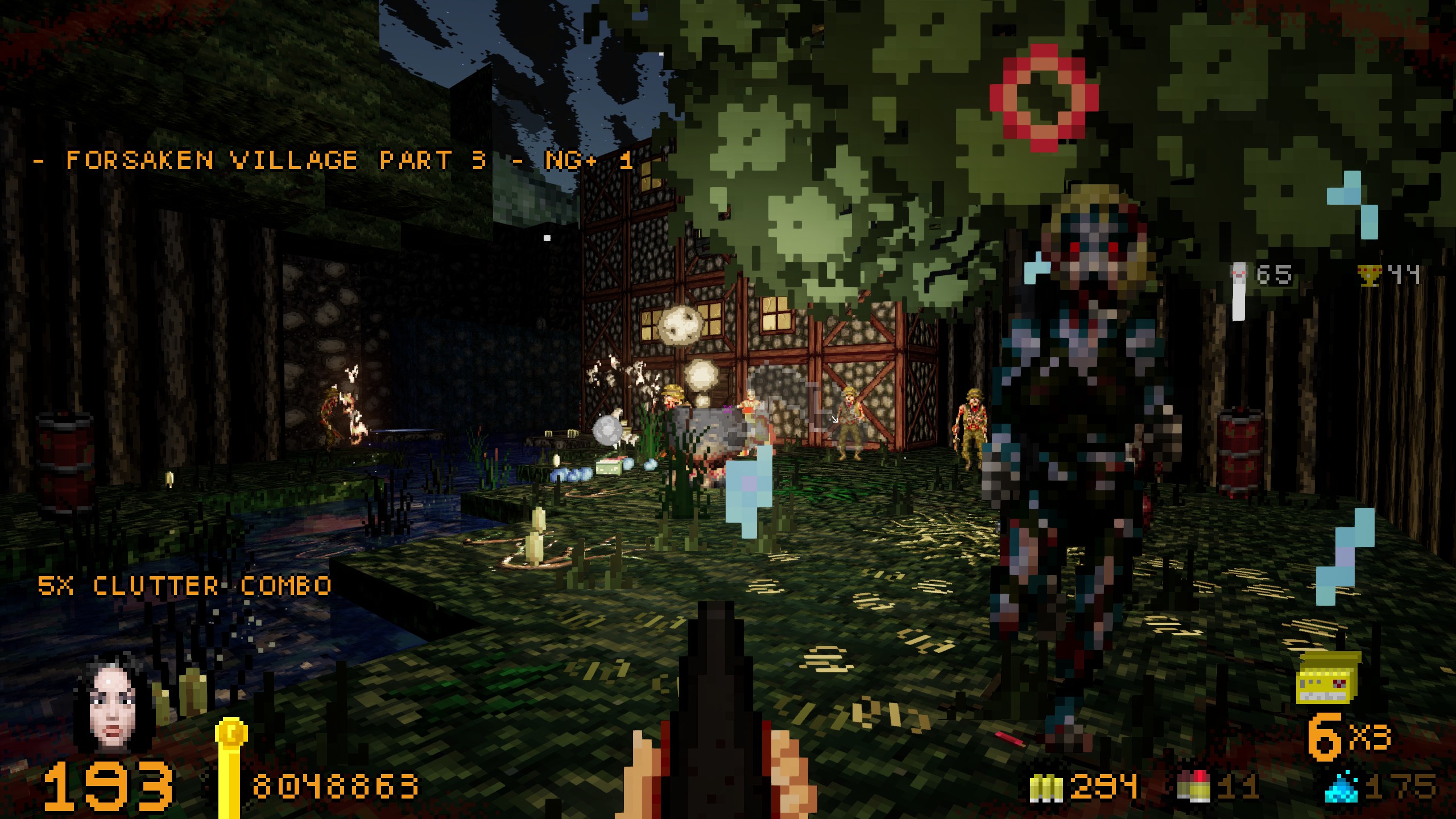 Strong Points: Every gun/weapon feels great and enjoyable to use; solid gun sound direction; arena game mode is a nice change of pace
Weak Points: Repetitive moments; visual clutter near the endgame and new game plus; all the bosses are lame
Moral Warnings: Ludicrous amounts of violence, blood, and gore; demonic/satanic imagery; descriptions of child abuse, drug abuse, and prostitution

There are three different skill trees all signified by a retro aesthetic of the Game Boy. Every time the menu opens up, a handheld system similar to the Game Boy Advance SP pops up where the skill trees can be accessed. Each tree is separated by the type of currency. One tree uses gold coins which are earned through the standard levels, the other uses jade coins earned through the arena mode, and the last tree uses topaz coins that are earned at the end of the standard levels. Each tree has a minigame tied to it taking influence from classic titles such as Super Mario Bros, Gradius, and Pokemon. It’s a cute little diversion, but in the end, I ended up turning off the minigames as doing them every time you wanted to add some skills to your repertoire got annoying. There’s not much to say about the minigames—they are very basic and easy.

Now when Nightmare Reaper was first released in Early Access, I’ve heard that the graphics were a mixed reception to the people who played it. Almost all of the graphics are retro-inspired. Think something like Doom, but even more pixelated. There are a lot of bright colors and somewhat distorted imagery. For the context of the game, I feel it works for what Blazing Bit was going for as it takes place in the mind of a mental patient. Even the retro aesthetic has story relevance as she typically found comfort in video games and movies. In the beginning, the levels are enclosed in somewhat dark underground areas like mines and caves. It’ll open up more with areas talking place in cities and buildings. In the end, areas become more psychological such as fragmented segments of a mansion, areas that are just covered in flesh, and a warped underwater section.

I ended up liking the aesthetics of the areas as they have a lot of variety, but the endgame has a ton of visual clutter. Your endgame weaponry, the enemies having more damaging moves, and the various effects both have started to get in the way of what you and the enemies are doing. After a while, it just started to become hard to distinguish what I was doing and what I needed to avoid. Even toning down many of the effects in the options did little to alleviate that issue. As a homage to Doom, in the UI you can see the female character in the left corner. She looks to her left and right just like Doomguy, smiles whenever picking up weapons, and shows damage whenever her health decreases.

The music consists of mostly heavy-metal inspired beats whenever the action takes place and slower subdued beats whenever action isn’t happening. In the skill tree and minigames, more 8-bit/16-bit inspired music takes place (as it wouldn’t be very fitting jumping on enemies to heavy metal). In terms of voice acting, the female character mostly emotes in grunts and laughter. The only character with voiced dialogue is her doctor, whose voice only appears when reading the notes on the patient. 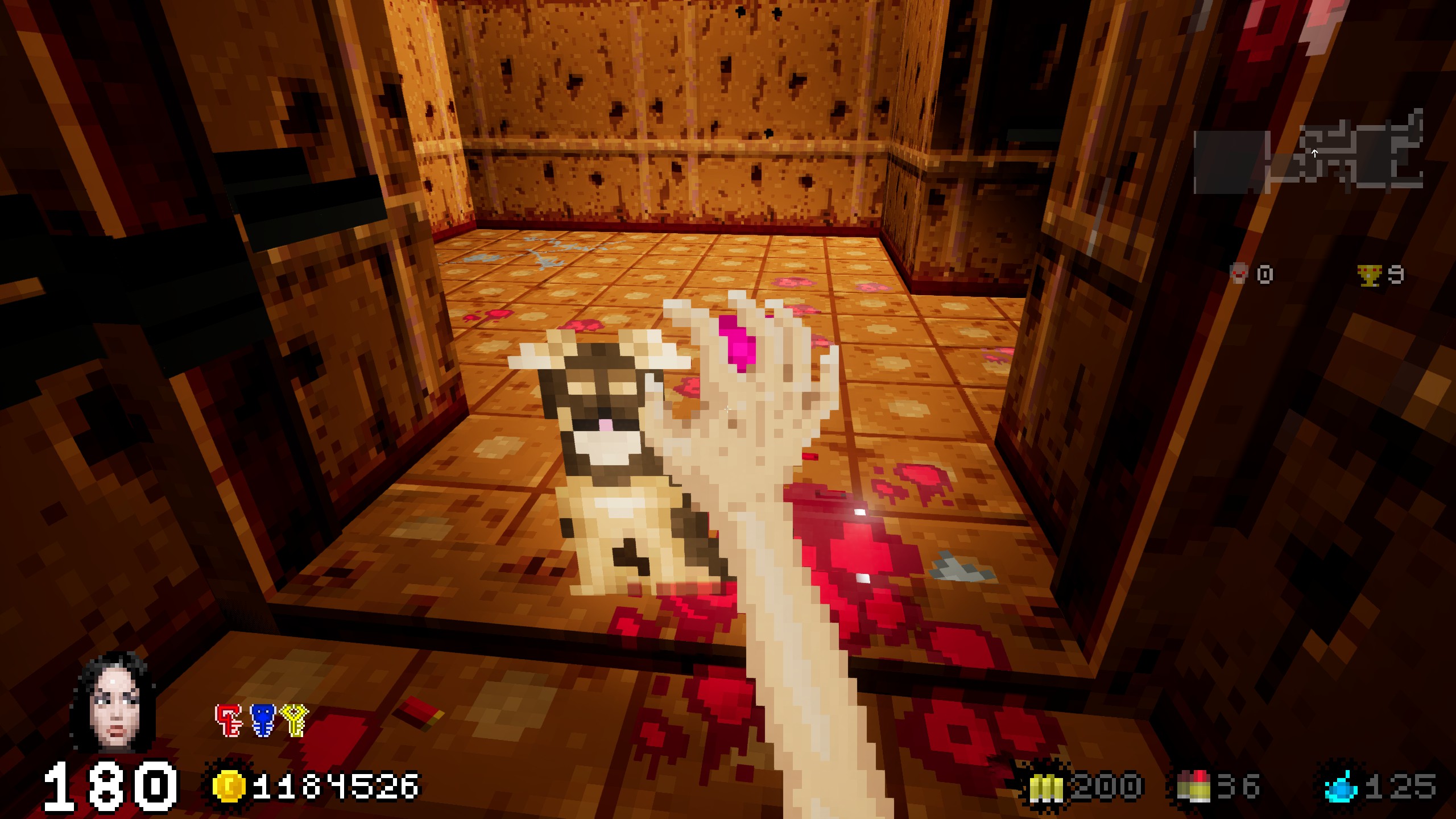 Nightmare Reaper can have some problems with repetition because you’re going to be going through the same motions for most of the runtime. Even though the level design opens up once you gain more skills and abilities such as air dashing, double jumps, and a grappling hook, the fact that there are over 80 levels and that a lot of them don’t manage to stand out (or stand out in a bad way), I started to get exhausted around three-quarters of the way. Levels aren’t long, but they’re not exactly short either which leads to Nightmare Reaper overstaying its welcome. AI, for the most part, is pretty basic as they'll either run straight towards you or shoot at a distance while standing still. Most enemies don't take advantage of the level design or the movement options you unlock later on so Nightmare Reaper can start leaning towards the easy side for skilled players. The enemy variety also suffers from the sheer amount of levels as they have to be slowly introduced so for long stretches, you’ll find yourself fighting the same five or six enemies for a half-dozen levels.

The bosses I found to be lame as there are only a few of them, but they all consist of just shooting at them while you circle around them. They're either effortlessly easy or annoying with constant hard to dodge AoE attacks. Boss fights in shooting games are a complicated affair because of how they have to be designed for the genre. I feel the concept of boss fights in shooters doesn't work and most games would be better off without them—Nightmare Reaper falling into that section.

Getting into the morality segment, there’s a lot to cover. Nightmare Reaper is an especially violent game in which enemies explode into a confetti of blood and chunks. Even more so if you successfully land a headshot. The option to remove almost all the blood or turn it into candy exists too. There is even the option of having more blood and gore effects to an absurd degree. Some supernatural elements are present as the enemies she fights in her mind are skeletons, zombies, and necromancers. Magic and occult abilities are used by both enemies and the player with tomes, demonic energy, inverted pentagrams, and the Nightmare Reaper powerup granting her horns and the ability to shoot demonic balls of energy and lightning.

Within the lore, as described by the doctor, the female character ended up in her predicament due to a neglected and abusive childhood. She was subjected to drug usage, child abuse, and forced prostitution by her own mother. Her father is a frequent “visitor” of prison and thus was mostly absent from her life. When he wasn’t, he would typically beat her. All of these awful events led her to commit murder as she carried a general disdain for human life, leading to her admittance into a psychiatric hospital. At the end of the game, there are two choices to make: sacrifice, or control. The latter is a more unethical decision to make as sacrifice means to "sacrifice yourself" so that the protagonist can finally live her life—whereas control means "to take dominance" over her mind.

Although I do wish that Nightmare Reaper was shorter than it is, I still mostly enjoyed the 21 hours it took me to complete the story (admittingly, a few of those hours were spent in the arena side mode). New Game plus adds some extra stats to your weapons as well as the option to use many of the late-game abilities/weapons you acquired (as well as completely break the early levels with your movement options). The arena mode is a decent change of pace even if it does get chaotic after a while. Outside of a few problems such as a terribly designed late-game level (which I’m sure will get fixed as I’m not the only one who has complained about it) and falling into repetitive patterns, the gunplay will be the thing that will keep people coming back for more. Now moral warnings are of course heavy with tons of violence, lots of occult & supernatural imagery, and intense subject matter such as abuse. If you can handle all of that and want a more “straightforward” classic shooter with lots of things to kill, then Nightmare Reaper might just be for you.