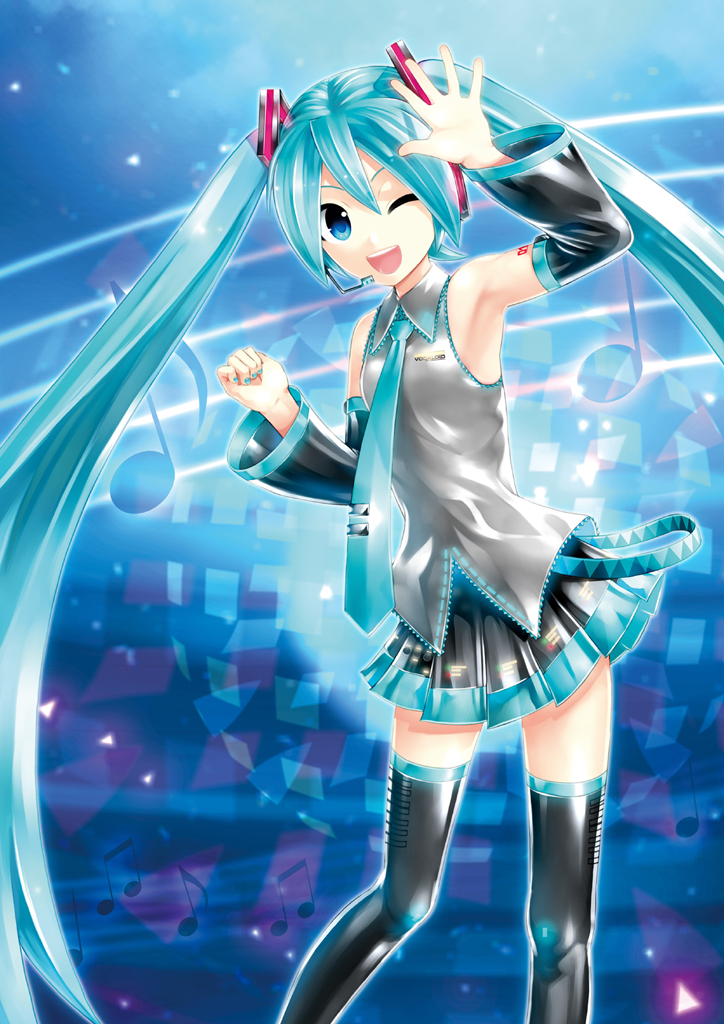 Thank you SEGA for proving us with a review code for this game and its DLC!

Hatsune Miku and her friends are vocaloids whose singing is generated via vocaloid software. Even though Hatsune Miku is a fictional sixteen-year-old with turquoise colored hair, she has quite the fan base. She has been featured in over 100,000 songs world-wide.  In Hatsune Miku: Project Diva X you initially play as Hatsune Miku, but can quickly unlock the ability to sing as Kagamine Rin, Kagamine Len, Megurine Luka, KAITO, and MEIKO.

The story is simple yet functional.  In Hatsune Miku’s universe there are five prism clouds (Classic, Cool, Cute, Elegant, and Quirky) and they have lost their illumination.  In order to recharge and re-connect the prisms Hatsune Miku and her friends must sing to generate voltage.  Each themed cloud has a total of six songs that must be sung in order to unlock and reconnect the next area.  Out of the six songs, five of them are playable at the beginning with the final song being slightly harder as a finale.  The finale is a mashup of several songs (all sung in Japanese) and is slightly more difficult than the regular songs.

Like many rhythm games, you’ll have to match the floating notes with their corresponding button presses.  For example, the floating X will require you to press the X on the controller when it’s lined up perfectly to its matching icon.  To help out, the icons have spinning second hands that should have the button pressed with they’re in the 12’O Clock position.  Star icons require you to press one of the joysticks in any direction when aligned with the floating stars.  Colored floating arrows need you to press the corresponding directional arrow along with the colored symbol it’s associated with.  Last but not least are rush icons that need you to mash a particular button for a short period of time. 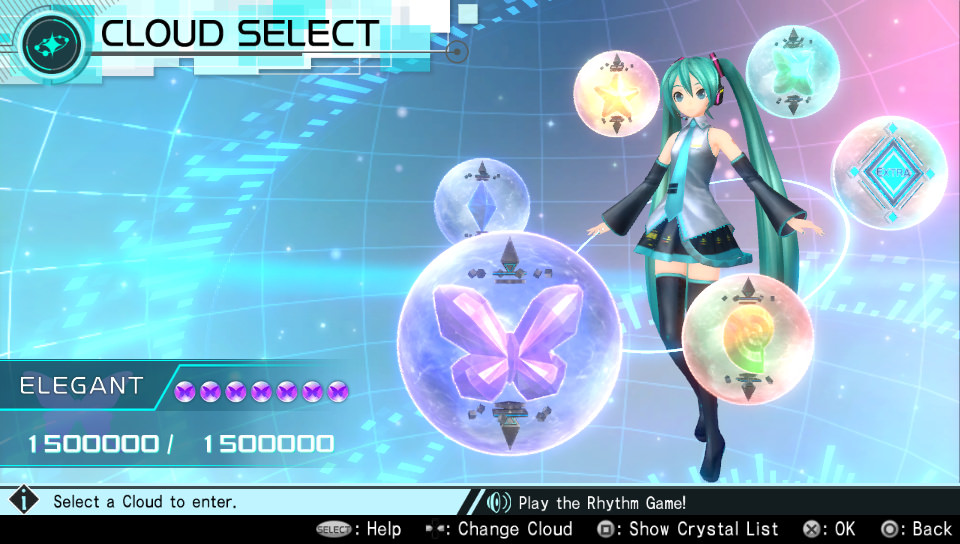 In the beginning there are only two difficulties available: Easy and Normal.  In the easy mode you typically only have to deal with one button type and normal has you working with two.  After illuminating all five of the cloud prisms, the last two difficulties, Hard and Extreme, become unlocked.  Naturally, they require you to master handling more buttons in the songs.

The main story will take less than eight hours to complete, but there is still plenty more to do once you illuminate all of the cloud prisms again.  You can unlock a final song by playing songs again to earn crystals in each of the galaxies.  There is also a Free Play mode where you can play the songs without having to worry about reaching the minimum voltage level.  The Technical and Chance zones are still in the songs though.  In order to complete a Technical Zone you have to have Cool or Good ratings on the predetermined set of notes.  Getting a Safe, Bad, or Miss ends the zone.  The Chance Zone isn’t as picky but you do have to finish the zone by getting the last star note.  If completed, the Chance Zone will have your character change outfits mid-song and net you a ton of voltage points.

For each completed song you’ll earn prizes and modules to change into and accessorize with.    Before each song you’ll have the opportunity to dress and accessorize your singer.  Each outfit and accessory can enhance the voltage multiplier if matched to the prism’s aura.  For example, the Quirky prism rewards your singer if they have on a silly outfit.  There are a ton of accessories to choose from as well and if you keep a similar theme throughout them all you can get up to a 60% voltage bonus.

Unlike Hatsune Miku: Project Mirai DX on the 3DS, there are not many mini-games in this title.  There is a relationship mini-game where you can give gifts to the singer to get them to like and trust you more.  Sometimes the gifts will be gratefully accepted, and sometimes they’ll be noticeably disappointed.  Each character has their own preferences and tastes.  Sometimes they’ll have a specific craving and if you’re able to satisfy it, you’ll get lots of reward points. 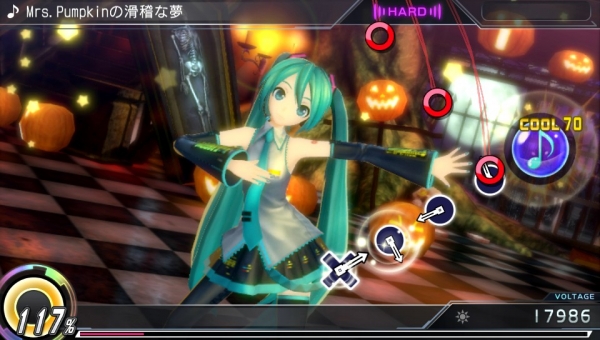 There’s a wide variety of gifts ranging from food to toys and interior design items.  Some of the gifts will have cut scenes associated with them but not all of them do.  Sometimes the cut scenes don’t match the initial reactions.  I gave Hatsune Miku a fishbowl which she didn’t appreciate, but according to the cut scene she enjoyed her new pet.

Though the character interactions are happy and family friendly, the songs can be a bit darker in nature if you have time to actually read the lyrics.  Since the songs are sung in Japanese you won’t easily pick up on the themes of love, depression, goddesses, magic, or blaspheming (Oh Jesus!).  You have the option of setting the subtitled lyrics to be in English or spelled out in Romanji to better understand what they’re singing in Japanese.

The songs are mostly pop and actually got stuck in my head even though I don't know what they’re saying.  My favorite song in the game is

.  The singing is pretty impressive for software, but while the characters are talking in-game you can tell that it’s synthesized.

Visually Hatsune Miku: Project Mirai looks great on the Vita.  The character and customization options are plentiful and look good.  Unfortunately, some of the outfits can be revealing including skimpy swimwear on both the male and female characters.

In the end, Hatsune Miku: Project Mirai is a cute rhythm game that is fun to play if you enjoy JPOP and vocaloid music.  The main campaign is relatively short, but there’s plenty of replay value in collecting modules and gifts for the characters. If you see this title on sale, it’s worth adding to your rhythm game collection.