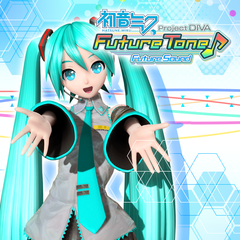 Thank you Sega for sending us a review copy of this game!

The virtual popstar Hatsune Miku and her vocaloid (all of the voices are synthesized!) friends are back and upping the ante in this rhythm game.  The same gameplay that Hatsune fans enjoy is there, but with five difficulties and two hundred and twenty-four songs to test your skills on.  Those who love customizing Hatsune Miku and her friends will not be disappointed with the three hundred plus modules/outfits available for purchase with in-game currency earned by successfully completing songs.

Like many rhythm games, you’ll have to match the floating notes with their corresponding button presses.  For example, the floating X will require you to press the X on the controller when it’s lined up perfectly to its matching icon.  To help out, the icons have spinning second hands; the button should be pressed when they're in the 12 o'clock position.  The joystick or triggers will be required when their orange icons are displayed.  Just in case that wasn’t enough to keep track of, there are various combinations to master as well.  The combinations are often used in the featured mode that requires perfect execution in order to successfully pull off a costume change mid-song.  Big points and completion rewards are given for mastering this technique.

Each song has two status bars that you have to pay attention to.  The life bar on top is added for each Cool, Good, and Safe rating.  When you get a Bad, Miss, or press the wrong button, the life bar gets depleted a bit.  If the life bar is fully drained you’ll fail the song unless you have the “No Fail” option enabled.  The bottom status bar shows the song completion percentage and how close you are to completing or exceeding the minimum passing requirements.  Anything less than 50% does not count as completed.  You will still get ten points/virtual currency for attempting and failing a song.  Several hundred points are awarded for successfully completing a song and you get more points for doing so at harder difficulties. 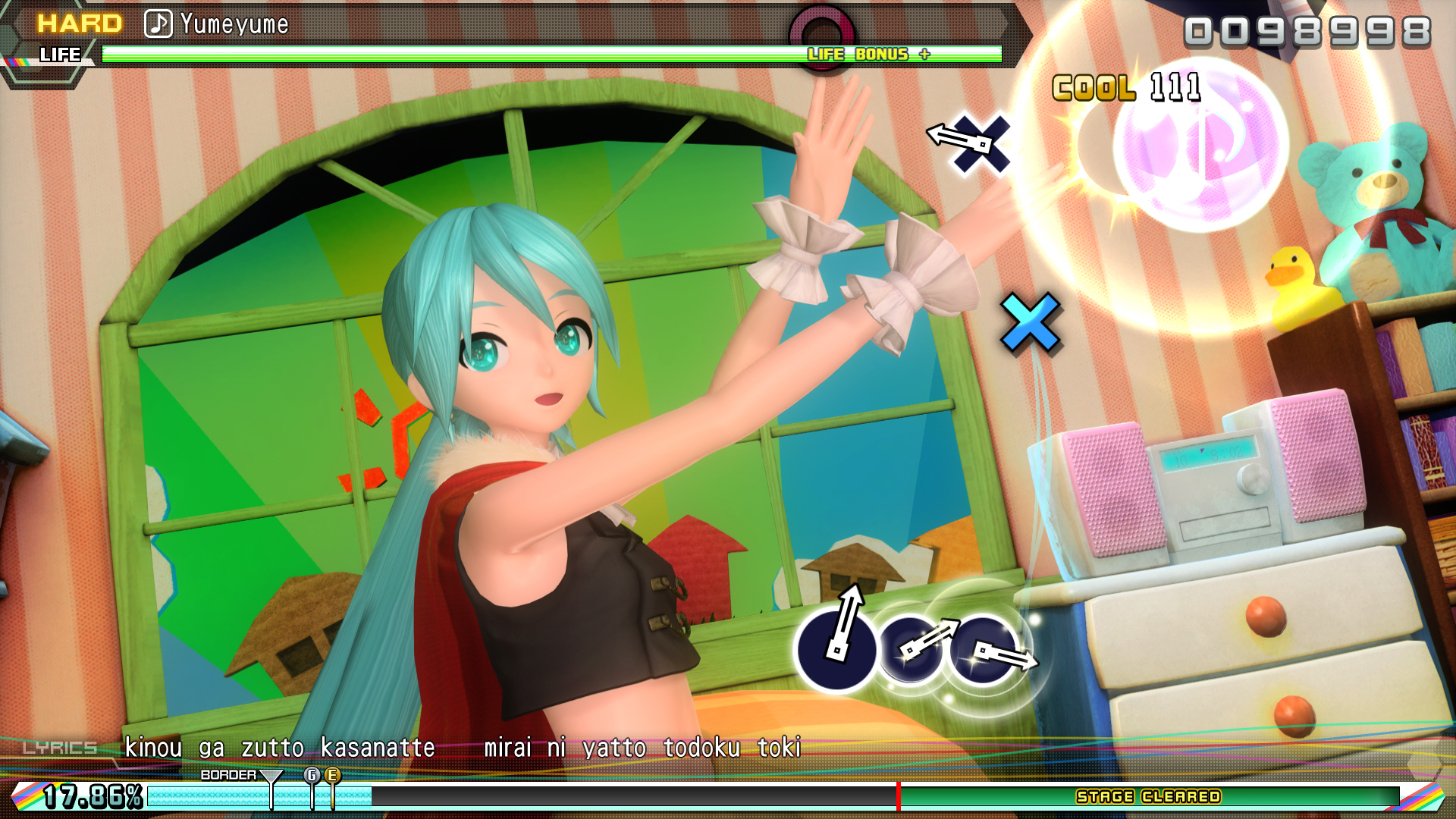 Strong Points: Extensive collection of songs and more challenging gameplay
Weak Points: Two hundred and twenty-four songs and they did not include my

!
Moral Warnings: Skimpy outfits including bikinis and speedos can be worn by the singers; Halloween themed outfits

The currency can be used to purchase outfits, hair styles and various accessories to customize Hatsune Miku, Kagamine Rin, Kagamine Len, Magurine Luka, KAITO, MEIKO, Akita Neru, Kasane Teto, Sekine Meiko, and Yowane Haku.  You can make the characters look like pirates, ninjas, goddesses, school girls/boys, Santa, cats, clowns and plenty more.  There are even Sega tribute outfits like Sonic and Valkyria Chronicles themed ones.  Some of the outfits are swimwear based (bikinis and speedos) and expose more skin than covering it.  Whatever outfit and character is selected will be used in the rhythm game performance.

The visuals are great in this game and the character detail and animations are top notch.  I like how you have the option to just watch the music videos to appreciate them without focusing on mashing buttons in time.  There’s also a practice mode if you need to improve your skills a bit. 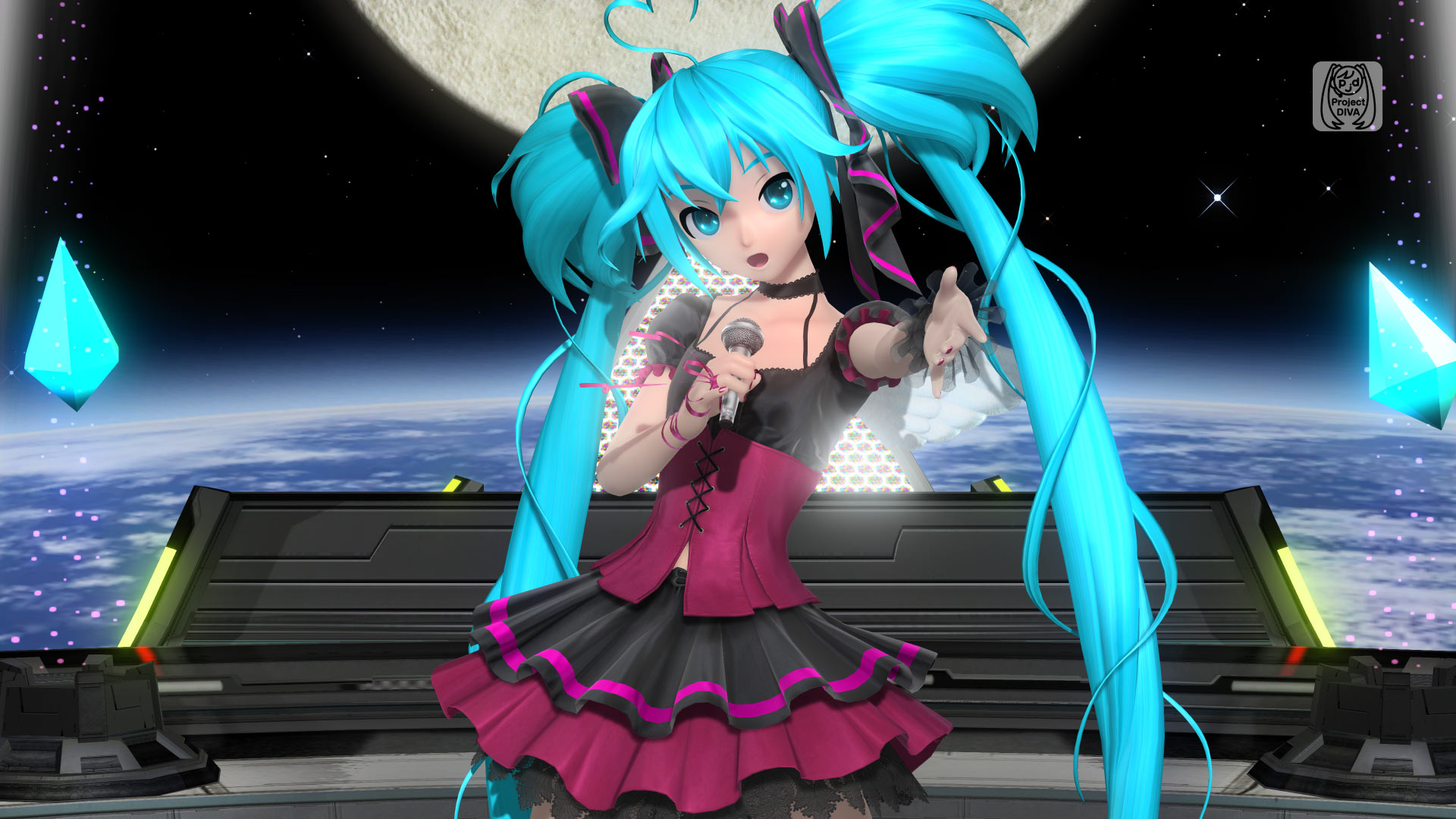 The songs are all sung in Japanese and the lyrics are shown in Romanji which shows the Japanese sounds in a Western alphabet.  Since I am not fluent in Japanese, I have no idea what the meaning of most of the songs are.  Many are love themed and some of them even talk about cats.  A few of the songs have a darker tone and could be a contributing factor to its Teen rating from the ESRB.

While I didn’t do bad, there were some songs that I failed on normal difficulty.  I typically earned a C on my performances, but

with its tempo changes was too much for me the few times I tried it.  Despite my mediocre performances, I still had fun and that's what counts.  There are plenty of songs to choose from and most of them consist of pop music, but there are some rock, dance, reggae, and even polka songs. Despite my favorite song not being in this game, the selection is still great and bound to please any Hatsune Miku fan.
Rhythm