Thank you Sierra for sending us this game to review!

Geometry Wars started off as a mini-game in Project Gotham Racing 2 for the Xbox back in 2003.  Since then it has been released on the Xbox 360, Xbox One,  DS, Wii, PC, PlayStation 3, 4, Vita, and mobile platforms.    The first stand alone title, Geometry Wars: Retro Evolved held the record for the most-downloaded Xbox Live Arcade game.  Needless to say that this mini-game is loved by many and stands well enough on its own.

Geometry Wars 3: Dimensions Evolved  is a 3D twin stick shooter that uses the analog stick on the left to move the ship and the right analog stick fires bullets in the direction it is pointed. There are twelve battle modes and the one called Pacifism does not let you shoot at oncoming hostiles.   In order to destroy the enemies in that mode you can fly through randomly appearing gates that will explode shortly after you go through them hopefully taking out  many enemy ships with it. 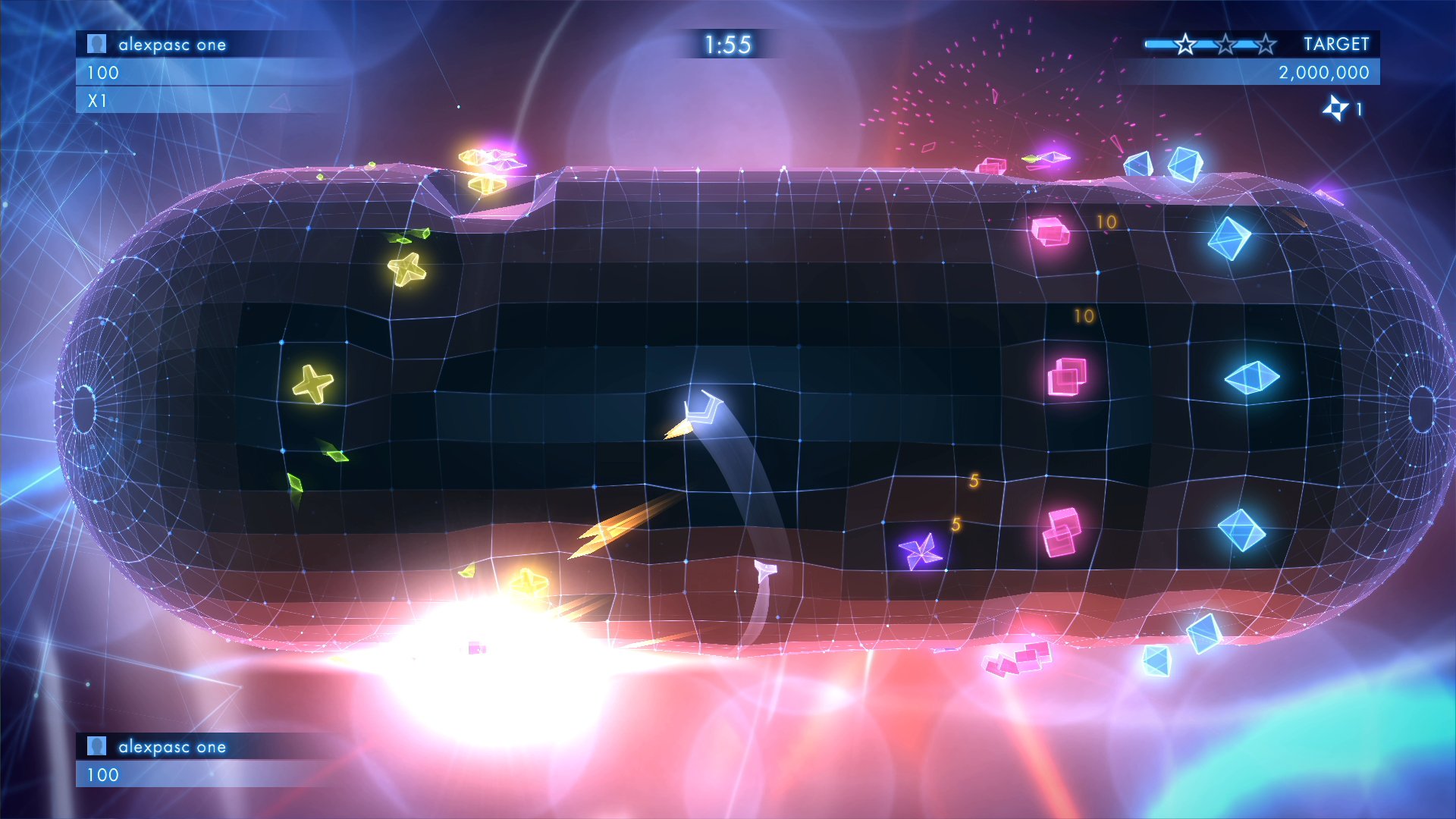 King Classic is another gun limiting mode where guns only work in randomly appearing and disappearing zones.  You have one life and you have to make it count.  The most common mode, Deadline, gives you an infinite number of lives and your goal is to get the most points before the time runs out.  It should go without saying that the more you die, the more points you miss out on with the enemies disappearing from the stage reset.  When you die, all of the on-screen enemies will disappear ans new ones  (worth less points) will respawn.  Evolved mode has the same goal of scoring lots of points, with only three lives.  The Waves mode has you doing the same thing with a single life.  The Check Point mode has hostiles coming in waves and to extend the timer, all of the enemies in the current wave must be defeated.   Boss battles from the adventure campaign work in a similar fashion where they will release waves of hostile ships that have to be defeated in thirty seconds or less.  When multiple waves are sent it's hard to keep track of which enemies to focus on.

Scores are crucial for advancing in the single-player campaign.  The best way to earn a high score is to stay alive.  If you're in a pinch, many levels have a onetime use bomb that will clear the screen and net you some serious points while it saves your skin.   Aside from that, it's also beneficial to collect the geoms dropped by fallen enemies to increase your score multiplier.   Usually after a few waves of hostile ships are destroyed, power-ups like multi-directional fire or wider range attacks become available for a short period of time. If you die, the ability will be gone when you respawn.

As you progress in the adventure campaign, points will be earned to upgrade helpful drones and abilities like placing proximity mines on the playing field.  One to three stars are awarded depending on your final score upon clearing the level.  Bonus, Ultimate, and Hardcore levels become available when the required amount of stars have been earned. 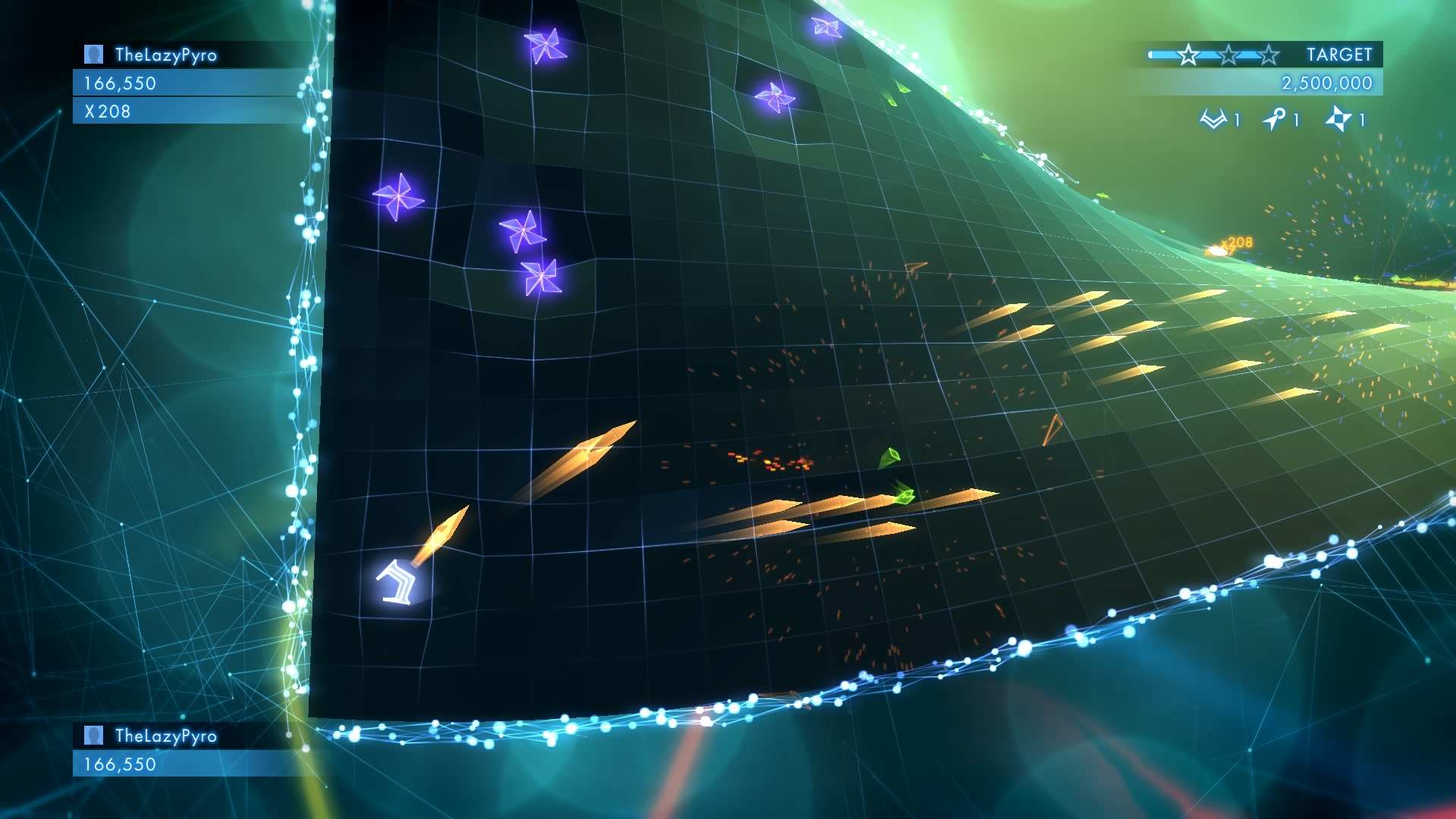 There are two forms of multiplayer available including local co-op and online.  Unfortunately, I was not able to find anyone to play an online match with.  If you have friends online or play this  game on a console, you'll have a better chance with local co-op.  I like the integrated leaderboards and it adds a bit of a challenge to beat the scores of my PSN friends who have bested me on some of the levels.

Geometry Wars 3: Dimensions Evolved  is a fun game that can be enjoyed by people of all ages.  My kids had fun watching and playing this game.  The graphics and voice effects are retro, but they add to the theme of the series.  The music has a smooth techno style to it that is bound to get your adrenaline pumping as the enemy ships swarm and surround you.

Any gamer that enjoys twin stick shooters will find a lot to like in Geometry Wars 3: Dimensions Evolved.  The price is a reasonable $14.99 on PSN and Steam.  Despite the lack of people playing online, there is still plenty of re-play ability with the single-player levels.  Especially if you have friends with higher scores that are intimidating you.