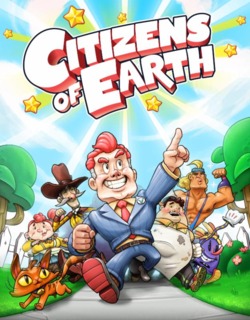 Thank you Atlus for sending us review copies of this game!

The self-absorbed  Vice President of the world just won the election and hopes to celebrate by relaxing at his mom's place.  When he wakes up something seems to be very off.  While many people are addicted to coffee, the people in his home town are obsessed with it.  Not only that, stop signs, traffic cones, and all sorts of mutated wildlife have become aggressive.  Since the vice president doesn't want to get his hands dirty, he'll have to recruit people to fight these battles for him and lend their services to his every need.

Citizens of Earth is a 2D mashup of the popular Earthbound and Pokémon games.  In this game you have to "recruit them all!" and save the world from an alien invasion (partially spread through coffee).   Your mom and brother are the easiest citizens that will join your cause.  Most people will either quiz you, challenge you to a mini game, or ask that you complete a side quest before they join you.  The Yoga Instructor will require that every party member is level twenty before she will assist you.   If you want to save some time grinding, try to recruit her as early as possible in the game.

In this game you're either busy fighting aliens you've bumped into, or doing side quests to win over a citizen.  Before the bee keeper will join your party you must find her lost bees and send them back to the bee hive.  The bartender will challenge you to a root beer drinking game that tests your timing and reflexes.  The musician's DDR like mini-game was one of the easier challenges for me to complete.

There are two ways to level up your party.  Experience earned through fighting or paying for experience at the school.  If you recruit the teacher, he can train your party members anywhere.  One advantage to fighting experience is that the citizens get stats boosts influenced by other members of the party when they level up.  Besides stat boosts, citizens level up their abilities and learn new attacks over time.

The battle mode reminded me of Bravely Default where you can use more powerful attacks if you have enough energy to use them.  There are weak attacks that recharge your energy, or you can consume coffee to fill up your energy meter faster.  The energy attacks are more powerful and can be elemental, physical, verbal, or physiological.   Some citizens can use their energy to heal other players.

Besides unique battle moves, some citizens can unlock playable areas.  For example, the hacker can take you into a virtual world to fight viruses and the life guard teaches you how to go underwater for extended periods of time.   While you can walk everywhere, recruiting the car salesman and pilot can take you places faster via the roads or the skies.

With the salesman's driving ability you can simply run over enemies and get an experience point (every little bit helps!) for them.  This worked great until I leveled up my car salesman and then I got game crashes instead for the lower level enemies. 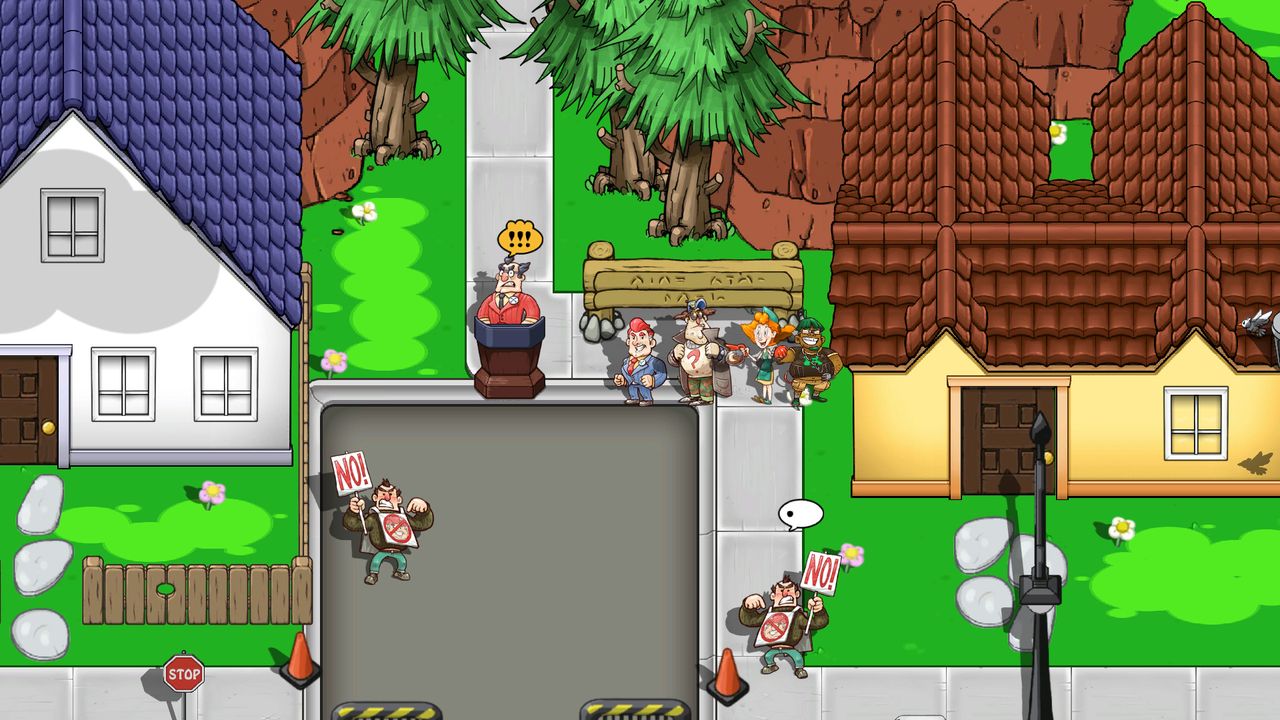 The dialogue is top notch and the characters are fun to interact with.  The humor in this game is silly and makes me want to like it despite its flaws.  Who can not like enemies called anchory birds, tankenstein, and stop vines?

While the enemies are amusing at times, many gamers will find them annoying and frustratingly difficult to avoid.  Every time you get past a loading screen, enemies will re-spawn.  Sometimes on top of you.    There are some boss battles to mix things up a little bit.  Each enemy type has their own unique weaknesses and invulnerabilities to pay attention to.  If you notice that your current party configuration isn't working out you can restart the battle with a new party at any time. If a citizen gets knocked out in battle they will stay down until revived, leveled up, or rested at a hotel.   If the whole party is wiped out the game will reset to the last checkpoint.  Be sure to save early and often!

Citizens of Earth has seven chapters that can take anywhere between fifteen to thirty hours to complete depending on how many side quests you take on.  There's a handy journal to help you keep track of the many possible side quests. The world is pretty open and encourages exploration with the random character power-ups scattered in various spots.

Gamers that enjoy Pokémon style RPGs or open world games may be entertained with Citizens of Earth for a while.  Despite some gambling and cartoon violence, it's pretty tame on the moral front.   The glitches and repetitive battles overshadowed the silly humor for me though.  This game is fun in small doses and would be perfect for a mobile platform if it wasn't for the long and plentiful loading screens.