Thank you Atomicom for sending us a review code for this game!

When I first saw the screenshots for Switch Galaxy Ultra, the visuals reminded me of one of my favorite racing games, Audio Surf.  Instead of riding my music tracks, there are several game modes including story, survival and multiplayer.  In survival the tracks are randomly generated and will go on until the ship runs into a barrier.  The longer you can last, the more in credits you can earn towards upgrading your ships.  There are multiple lanes that can be utilized to avoid the many obstacles in your way.

The controls are pretty easy as you can switch lanes using the triggers or the joysticks.  There are speed ramps that fill up your boost meter and to utilize the boost, you have to press the X button.  With the speed ramps and fast paced action, Switch Galaxy Ultra reminds many gamers of Wipeout and rightfully so.  Daren Douglas from the Wipeout series has done the comic book art for relaying the game's single-player story. 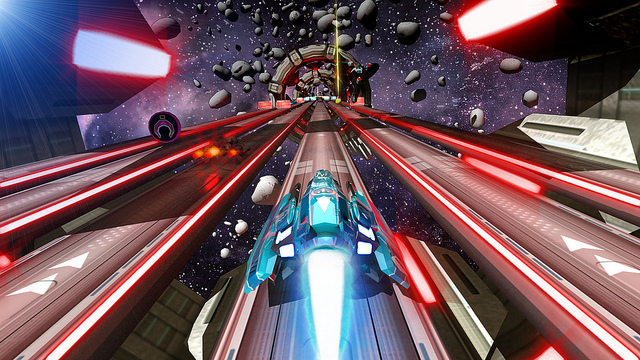 The single-player campaign has fifty-five maps that gradually ramp up in difficulty.  The main character is Vince Vance who has a checkered past, but regardless of what trouble he gets himself into, nobody can deny how fast he can race.  With his racing days behind him, he currently makes his money harvesting Tantalum.

Tantalum is a profitable mineral that can be acquired in the wormhole section of each track/level.  In these wormholes you can free fly and have to align your ship up with the blue orbs to collect them.  It's literally hit or miss and it's frustrating when you think you have your ship aligned only to have it go past you.  Other than that annoyance the game is fairly easy to control.

In order to progress through the galaxy you have to have a certain number of tantalum collected before you can access the next track.  The tantalum isn't taken away from you, it just has to be in your possession.  Vince's employer, Darkur Technologies, wants to accumulate enough tantalum to build a jump drive to allow fast travel across the galaxy.  Vince doesn't care what they do with it as long as he gets paid.

If you complete a track below par time, Darkur will give you some bonus credits.  With this money you can upgrade or re-skin your ships.   You can increase the ship's acceleration, shields, or reduce the slowdown from blowing through barriers.  Barriers are tax collecting devices that will slow down your ship if it plows through one.  If you're carrying tantalum you will lose one per barrier struck down.    One way to avoid these penalties is to buy passes which will allow you go through one per pass without penalty.  Some levels have passes you can collect mid-track. 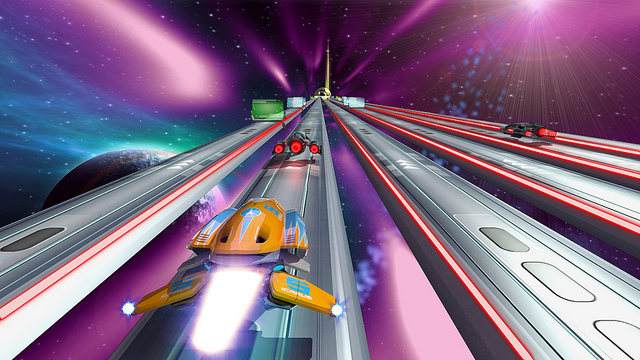 Besides passes there are lots of fun power-ups to be found as you progress in the game.  There are temporary invulnerability power-ups, bombs that destroy all nearby barriers and credit stealers from nearby ships.  At the beginning of the game you'll be the only ship on the road, but it won't take lng for that to change.  Some drivers are friendlier than others.

While there is a multiplayer mode, I was not able to find anyone online to play against. Unfortunately, if I can't play it, I can't write about it.

While this game is cross platform, I mostly played the Vita version because I like to play games while I'm out and about.  My biggest complaint about the Vita version is that the comic book story sequence font is hard to read and there is no way to enlarge it to make it clearer.  Before you make cracks about my age, my vision is 20/20.  This isn't an issue with the PS4 version and its 1080P 60 FPS performance.

The comic book story sequences are not voice acted, but the in game dialogue is. The character voices are fitting and give the characters some funny personalities.  The techno style music is fast paced, and pleasant to listen to.

There's a lot to like in Switch Galaxy Ultra.  Other than some potty humor it's safe for kids to play.  I was humbled when my seven year old son beat my high score in the survival mode.  (I have since beat his).  The lack of players online was disappointing as that is truly a missed opportunity.  If you like the single-player gameplay, there's a DLC available for $6.99 that adds an exclusive ship and fifteen more tracks.  All the proceeds from this DLC  go to the Caudwell Children charity which helps children with disabilities. So that's awesome.  The PSN price is set at $18.99 and it is worth considering if it goes on sale. Without people playing it online it's hard to justify paying full price.