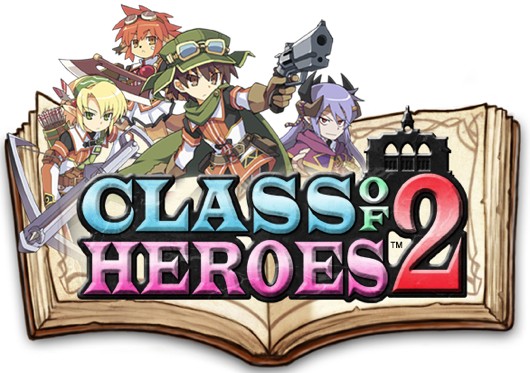 Thank you MonkeyPaw Games for sending us this game to review.

Class of Heroes is a 2D old school dungeon crawler that was released for the PSP in 2009 and it received mediocre reviews in the USA.  In Japan the series is doing well enough to produce several sequels for it.  Porting it over to the US has been an uphill battle since their Kickstarter fell short of its 500K goal.  I'm glad they took the harder road and continued on with translating the game regardless.  Since I have not played the original, I cannot compare the two, but this is a solid dungeon crawler that will give you many hours of hacking and slashing fun.

The artwork is clearly anime and the high school setting echoes many popular animes out there.  To enroll into the school, you must create characters and a party to learn the art of war and survival.  There are template characters thrown in which I'll confess to using.  There's so many races and classes that it can be a bit overwhelming.

My party had a variety of races including a catlike felpur, a fairy, a dwarf, a diablos (demon human), a bahaman (dragon human), and a human.  Each race has their own unique traits, but you can also roll for better stats to increase your power, intelligence, vitality and so on.  After the race is chosen, the career path opens up many new possibilities.  My party had a warrior, a ninja, a samurai, a healing fairy, a puppeteer, and an idol.  Each race has weapon restrictions and some of their powers are only available with a certain weapon equipped.  For example, my idol character could only use magic if he had his microphone equipped. I also learned the hard way that if my puppeteer did not have a puppet equipped that she would lose 1 health per step.   Like many RPGs, some weapons like swords and axes are only good at short range so make sure your back row has long range weapons equipped. 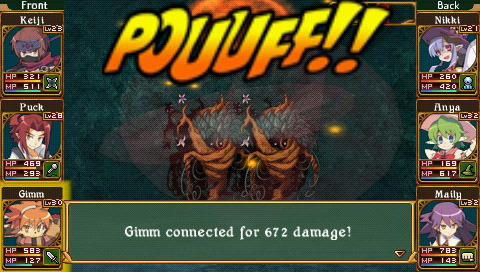 Strong Points: Humorous dialog and fun quests; challenging labyrinths
Weak Points: There's a little bit of a learning curve and the story takes a little while to pick up steam
Moral Warnings: Many of the same RPG issues like magic and violence, along with some sexual innuendos and swearing

The school campus has many useful areas including the dorm, where your party can rest or store extra items. The clinic is where you can receive treatment or revive fallen party members.  If your whole party is defeated the game will end.  Be sure to save early and often since permadeath is a very real possibility. The school store is where you can buy some starter gear and sell loot for gold.  The alchemy lab is available for creating your own equipment which is often cheaper than buying them from stores.  You'll have to know or buy recipes to craft them though.  The library is the place to go to read about and accept pending quests.

The quests start off pretty easy and gradually get harder as the story progresses.  You can see the difficulty rating and accept the quests you're comfortable with.  The story won't progress until certain key quests are cleared.  I was disappointed to find that some of these key quests deleted incomplete quests that I was in the middle of.  I cannot stress this enough: Save early and often.

Many of the quests send you off to dangerous dungeons to retrieve rare and unique items.  It's pretty much a given that these items are protected by a big and fearsome boss that won't just hand it over to you without a fight.  Getting to the boss is just half the battle.  Chipping away at you along the way are various hordes of unique enemies and treacherous terrain.   Some areas in the mazes have attributes that disable magic or can drown party members that are not floating or wearing stilts.  There are also tiles that rotate you so having a map and keeping your bearings is critical. One wrong move into a wall can often shock you if it's electrified.  Fortunately the trouble is worth going through as these quests often provide generous rewards upon completion. 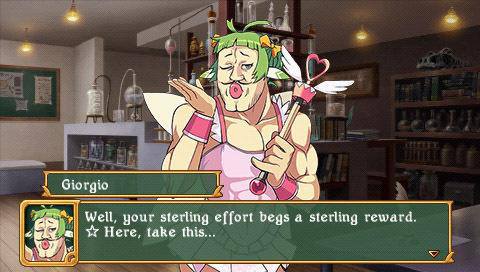 Other quests help build up the school characters and storyline.  There are some romance quests where you can help play matchmaker or find out some info on a teacher that the class president has a crush on.  Some of the romantic innuendos push the envelope, appropriateness wise.  The doctor in the clinic makes some comments that make him seem like a pedophile while the alchemy teacher, Giorgio, is clearly not shy about his sexuality with his pink tutu and accidentally chanting “Back door!” instead of “Trap door!” to cast a spell.  Magic including necromancy is heavily used in this game.  Unfortunately, language is another issue since the words B**ard and B**ches are both used in battle.

The battles play out like many popular RPGs where you can choose to attack, use an item, ability or spell, defend, or flee.  I must say that I've been spoiled by fancy magical effects which you won't see in this game. The graphics do get the job done, but they are not animated other than shaking still images when a character is hurt.  Their face profiles do change when they get hurt, level up, or get knocked out.

I wonder how this game would have been with English voice acting like they hoped for.  The noises the characters make when they attack or get hurt is clearly Japanese.  The background music and battle music is perfect though.  I especially enjoyed the boss music and random scary noises to startle me while exploring the labyrinths.

If you enjoy classic dungeon crawlers like Wizardry or Eye of the Beholder, you may like Class of Heroes 2.  Like many RPGs, it's got its fair share of moral issues though.  Class of Heroes 2 is playable on the PSP as well as the Vita and retails for $25.  I have gotten roughly forty-six hours into it, but it took me a little while to appreciate the old school charm.  I'm glad I stuck with it and gave Class of Heroes 2 a fair shake.  If they do another Kickstarter, I may back it next time.