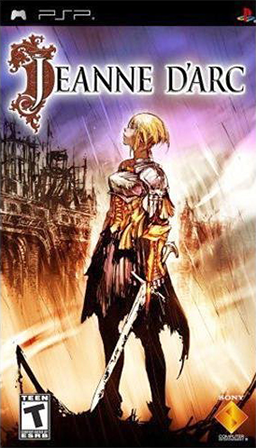 Jeanne D’arc is a 3D tactical role playing game that is loosely based on Joan of Arc and her role in the Hundred Year’s War.  In this game a divine armlet binds itself to Jeanne and guides her in liberating the French and defeating England’s possessed King Henry VI.  This is no small task and Jeanne must locate the other armlet wielders to build a powerful army.  Jeanne starts off with the help of her close friend Liane and an amnesiac swordsman named Roger.

As you explore and liberate French towns, you’ll accumulate party members with unique skill sets.  While many skills are customizable, characters are limited to what weapons and attack skills they can equip.  For example, sword wielders can learn the counter skill which lets them steal their enemy’s turn and replaces it with their own attack.  Spear wielders can learn a move called Take Flight which lets them attack foes outside of their normal reach.

Each character gets a maximum of six skill slots, but they start off with three.  The rest become available as they level up.  There are affinity skills that make a character both stronger and weaker to particular affinities.  For example Sun (Sol) is strong to Star (Stella) but weak to Moon (Luna).  I used these affinities in the beginning of the game, but towards the end I gave preference to HP boosting and healing stones.  If a unit falls in battle, they cannot be revived and will vanish off of the level.

About halfway through the game (I put in 45 hours), you’ll encounter a character that can bind skill stones to make better ones.  For example if you combine two HP +30 stones you’ll get a HP +50, combine two of those and you’ll get an HP +100 and if you combine two HP 100’s you get an HP +150.  I did quite a bit of farming to make sure my main characters had HP +150s, Mana +100 and HP Recovery III’s.  The HP Recovery II or III are essential to surviving as they bring back 2-30% of your HP at the beginning of each turn. 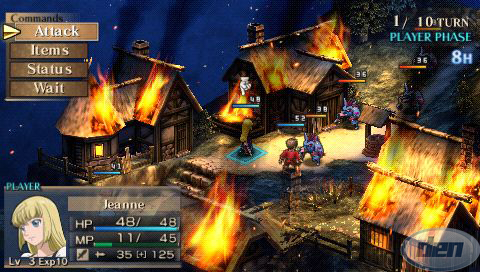 Waiting for each player and enemy to heal and attack takes time.  Unfortunately some of the levels experience more latency than others.   Slowness aside, the battle, story and character development is top notch and worth the wait.  There are story line and free play levels and I recommend doing them all.  The free play levels often have good loot including gems for making the armlet bearers even more powerful.

A typical level will give you an objective and a limited number of turns to complete it.  Most of the time your goal is to eliminate all of the enemies.  To fail a level like that you either have to exceed the number of turns or have your entire party fall in battle.  In a few story line levels you will fail if a certain character or two dies in battle.  If an objective is to eliminate a particular foe, you will want to focus on that character and not so much the rest of the enemies to conserve turns.

In battle a unit can move and physically attack nearby foes, use a magic based skill, use an item, or wait.  When units are close by each other they protect each other and lessen the damage received from physical attacks.  The downside to this strategy is that they are then vulnerable to magical area attacks.  When a player is attacked from behind or from their side, they will take more damage than a frontal attack.  There is a skill stone to negate this vulnerability. 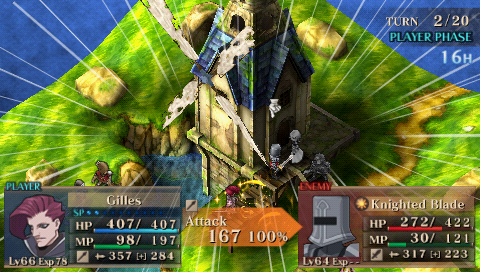 Armlet bearers can transform once per level and by doing so they gain several advantages.  Their HP becomes fully restored and temporarily boosted; they also gain an extra move for every defeated foe.  A super powerful magic skill is also available for the two turns they are transformed.  Since you can only transform once per level, use this ability wisely.

Jeanne D’Arc is divided into eight chapters that span over thirty levels.  There are a couple of forks in the road and your character roster and back story changes depending on the choices you make.  After beating the game you can play more free stages and battle against tougher monsters.

There’s plenty of variety in enemies and the bosses look intimidating.  The 3D artwork in game is pretty detailed though the players and monster look a bit squashed compared to their movie counterparts.  The anime cut-scenes and voice acting are well done and tells a great story.  The background music is pleasant to listen to and the sounds effects are fitting.

There are some violent and emotional scenes making this game not suitable for children.  There are many instances of swearing including d*mn and b**tard.    Lastly, some of the female characters wear tight fitting outfitting outfits and there are a couple of sexual innuendos.  For mature players Jeanne D’Arc is a great tactical RPG game available on the PSP platform.  I recommend this game for strategy and RPG lovers.