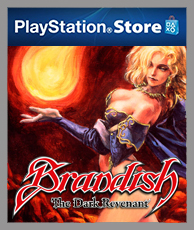 Thank you XSEED Games for sending us this game for review!

Brandish is an isometric, third-person dungeon crawling series created by industry legend Nihon Falcom that started on the Japanese PC back in 1991, and came to our shores for the first time as a SNES game in 1995.  The early versions had their charms, but had one flaw that was hard to overlook for many: the way the camera snapped into place when rotating.  Movement is in an unmarked grid system, where the player can step forward or back, strafe, or turn at the press of a button.  When turning, the character doesn't rotate; the game map does instead.  Instead of a gradual transition on rotation, it was an instant snap.  While some get used to it, it is fairly disorienting for many.

Brandish: The Dark Revenant, which is a remake of the original, solves this problem by 3D rendering the world (with much more modern technology), and rotating the camera smoothly when the player turns.  In 2009, this game was released in Japan; if it wasn't for the dedicated fans over at XSEED, it would have stayed there.  Now, almost six years later, the west has a chance to enjoy this title - on PSN, in English.

Brandish is the story of Ares and Dela, and their escape from an ancient underground tower.  Dela is chasing Ares across the landscape, as Ares, a swordsman, is a rival of Dela's former master.  She casts a powerful spell at Ares, and ends up blowing a hole in the earth where the two of them fall.  After regaining consciousness, Ares (the player character) sees a large tower in the distance, where he resolves to climb through to get back to the surface so he can live his life.

Dela finds herself in a similar predicament, and spends most of her time chasing down Ares, because after all, she still wants revenge.  New to The Dark Revenant is a Dela mode, which is unlocked after beating the game as Ares.  It is shorter, but much harder, than Ares' 20+ hour adventure.  They occasionally meet in short sequences where Dela finds some humorous way to get quickly separated after finally finding Ares. 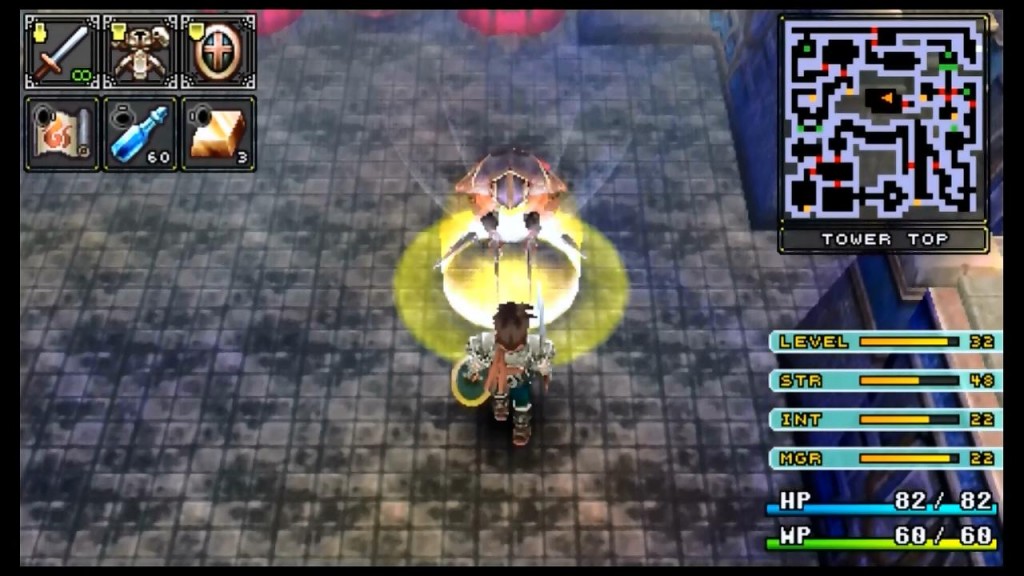 Strong Points: Solid, varied dungeon crawling gameplay; measured, strategic action; great update to a classic game; solid 20+ hour adventure; nice music; humorous dialogue
Weak Points: Not that much variety in the soundtrack
Moral Warnings: Animated violence, with some blood; gambling, with slots and a card game; a couple of females wear little or no clothing; a disguised enemy tries to seduce you (you see only hearts); a couple of hexagrams visible during the adventure; PG-13 level language like 'd*mn' (and varieties), 'h*ll', and '*ss'/'dumb*ss'; the card game uses the terms 'd*cking' and 'd*cked'

While there is a story as explained above, this game, like many other classics, is more about gameplay than storytelling.  It is an action RPG, but quite different than Falcom's other famous action RPG series, Ys.  While Ys is very fast paced and nearly twitchy, Brandish is much more tactical.  Everything moves in a grid, and movement is measured and somewhat predictable, or at least observable.  So if you are careful, it is almost always possible to avoid being hit.  You can also jump over the space directly in front of you, which adds to the options available for avoiding damage.  You and your enemies have large defensive frames when fighting head on, especially if they have a shield.  So, often fighting is a game of attack, block, and counterattack.  Some enemies are far too powerful to be blocked, so a different zig-zag dodge pattern must be taken against them.  And there are some surprises as well.  Enemy battles are always interesting.  Even much weaker ones can be very dangerous if they surround you.  How you interact with your environment is critical to your success.

And thankfully, the level design is truly great.  This series spawned three sequels and this remake, and it's easy to see why.  The dungeon is split into several major zones, such as the Ruins, Tower, Cave, and Fortress, with several other smaller areas as well.  Each of these has a certain theme, both audio and visual, and set of challenges that the game slowly trains you to overcome.  It's almost always challenging, while rarely being unfair.  It lets you save almost anywhere, and running away is almost always an option.  There are written plaques on the wall and various other simple mechanisms which help you learn how to overcome the puzzles.  There were a few 'Ah Ha!' moments where I figured out a tricky puzzle myself and felt like maybe I might even be kinda smart.  The best games do this very well.

Another important aspect of the gameplay experience, especially in the first half, is inventory management.  While this may sound boring, it is done in such a way that almost everything you need can be found if you wait for it.  However, buying certain things early can really pay off.  For example, the spells are very expensive, and you can't afford them for a long time.  But if you consistently conserve your money and sell off everything you don't need, it makes available to you at just the right time the very handy warp spell.  This allows much faster travel, and access to certain areas that are otherwise off limits.  If you don't have it, you also can't get 100% map on a few levels – and without this, you can't unlock some really important items only available that way.  Many weapons have limited uses, and most items can only be acquired once, so farming is not possible until very late in the game.  It is all part of the strategy.

There is also a hidden (and not so hidden later) casino that has items that are only available this way.  After spending in game gold for 'medals', you can gamble your way to being able to afford useful consumables, or more importantly, a few items that are otherwise unattainable.  There are slot machines, which aren't that much fun; but if you manage a 7-7-7 match (or Bar-Bar-Bar), they can be reasonably profitable.  But by far the main draw and medal-maker is the unique card game called Blade.  It's actually pretty fun.  It somewhat resembles Blackjack, with the goal instead being to get the highest score, and there are cards that allow you to zap or switch hands with your opponent.  It's entertaining, though I did get tired of it as I was trying to earn those hard to get items. 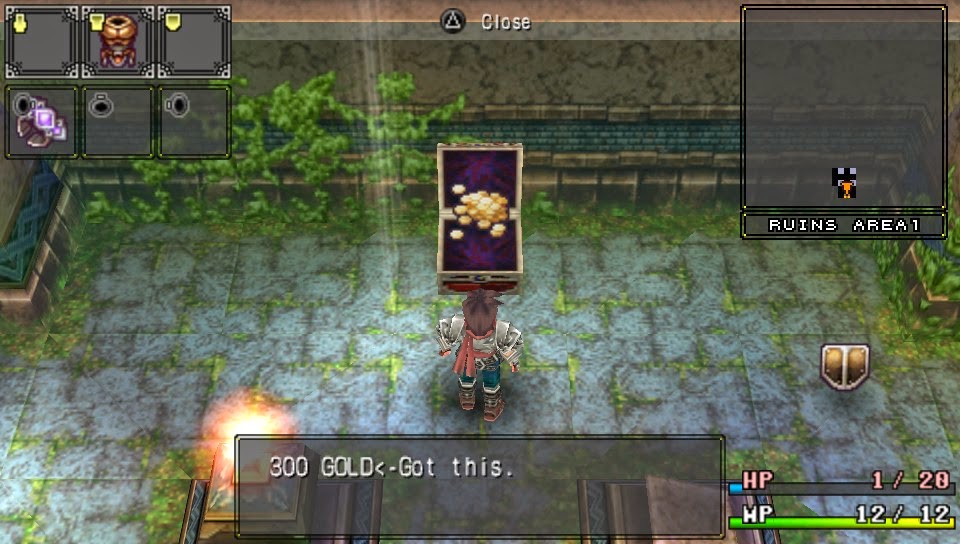 In addition to the obvious gambling component, Blade does use some rather unusual terminology for certain conditions in the game.  For example, the process of playing out the draw cards is called 'd*cking'.  Whoever gets 'd*cked' is the one with the smaller number on that draw, and gets to play their next card first. There is also a lady in the casino wearing an alluring outfit with bunny ears.

Far worse than that is the main antagonist Dela, who wears basically a leather armor bikini.  It is extremely revealing, almost to the point of making fun of the 'bikini armor' trope itself.  She wears this leather underwear, along with large armored shoulder pads and a cape, while wielding a staff.  It looks pretty silly.  I can't imagine how her skin can stay so clean around those enemies.  There is also an NPC who is a nymph.  This creature is clearly female, and is basically nude, with small scales covering up her nipples, with lack of detail everywhere else.  One of the enemies is a disguised medusa, who says she will show you 'all of her', which makes it seem seductive, with heart icons everywhere... then proceeds to attack you.

Several of the shopkeepers, Dela, and a few other characters say occasional curse words, such as d*mned, d*mmit, and d*mn, h*ll, dumb*ss and *ss.  One boss and I think one other place shows a hexagram, but no pentagrams that I noticed.  There is violence with some blood, though no puddles that I recall.  Mostly red slashes when attacking enemies.  It is not gory.  There are undead enemies that can't be killed, and some videos featuring skulls and other ugly things.  There is magic use by both the player and enemies.

The game looks and sounds very good on PS Vita, which is the primary portable PlayStation platform these days.  Despite having a limited soundtrack, I really enjoyed the music, as I always do with Falcom games.  Though designed to run on either PSP or Vita, it played nearly perfectly, with only very minor sound and graphical glitches, on the PPSSPP emulator on PC.  Anyone without a PSP can actually download and play this quasi-legally from Sony using the MediaGo app, downloading the PSP Go files, then converting them to an ISO file using a homebrew decryption utility.  While this is in a legal 'gray zone', it is a very fun way to play, and looks much better with the improved rendering resolution.  It is also a great way to play this game if you do not own a PSP or Vita.  I strongly discourage pirating under any circumstances, so please do not do this.  Falcom and XSEED deserve what they charge if you choose to play this game.

Brandish: The Dark Revenant is a very solid dungeon crawler with some attributes that make it truly unique, especially in today's gaming market.  The combination of the third person perspective, the direct action yet tactical battles, and great level design combine to make a very enjoyable romp.  However, I would not recommend letting children play this game.  And for the rest of you, consider the content before taking the plunge.  Fortunately, while magic and violence are always present, most of the other issues, like skimpy outfits, hexagrams, and foul language, are occasional, not constant companions.  Thankfully, in Dela mode, her cape covers her rear, so it's not a constant issue there, either.  If you choose to embark on this escape from certain death or imprisonment underground, an enjoyable adventure awaits.