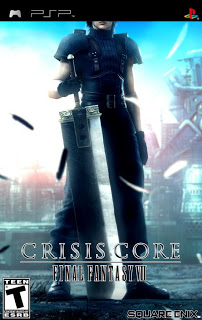 Zack Fair is briefly mentioned in Final Fantasy VII as being Aerith’s missing boyfriend.  When Cloud and his friends visit Zack’s hometown village of Gongaga, you’ll meet his worried parents who have not heard from him in five years.  Crisis Core goes back in time and puts you in the place of Zack Fair, SOLDIER (Shinra's elite army division) 2nd class.  Some of his closest friends include a couple guys named Angeal, Genesis and Sephiroth.   Later in the game, Zack meets an insecure Cloud and takes him under his wing.

Life in SOLDIER is pretty hectic since many monster outbreaks are occurring worldwide.  To make matters worse, some high clearance Shinra employees are defecting and attacking the headquarters.  Coincidentally, a couple of his friends go missing and Zack must find out what happened to them. Besides investigating recent activities, Zack can undertake many optional missions for some nice rewards.

While completing missions can bring you new Materia (magic) and better equipment, leveling up is not guaranteed.  The leveling and attack systems are totally random and determined by spinning jackpot numbers.  If certain characters and numbers line up, either a powerful attack is unleashed or Zack and his Materia level up. 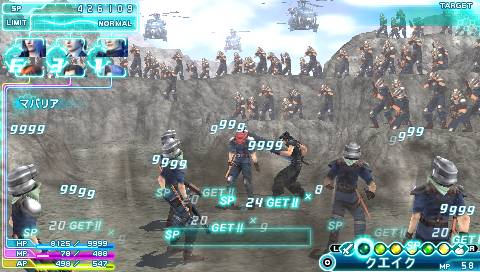 The battle system has been completely revamped as well.  Depending on what Materia Zack has equipped, he can cast offensive/healing magic or do a special attack.  The triggers change the current selection and the triangle and square buttons have him guard or dodge enemy attacks.  For the most part I was mashing the attack button while dodging predictable jabs.

The battle music has an edgier metal sound to it which is completely different than Nobuo Uematsu’s offerings.  The music in Crisis Core is composed by Takeharu Ishimoto who did a good job offering both soothing and adrenaline pumping tunes.  Some of the familiar songs appear slightly revamped including "One Winged Angel" and "Aerith’s Theme".

Final Fantasy veterans will also recognize many of the items in the game including Ether, Elixers, Phoenix Downs, White Capes, and Earrings, along with various armors, bangles, belts and bracelets.  Many of the enemies have elemental attacks that can be absorbed or halved if you are properly accessorized.  All of the enemies and summons are from previous games and you have to beat them before they become usable by you.  You can embrace the power of Bahamut, Odin, Ifirit and Phoenix.  Other attacks can become available as you clear missions.  By doing so, you have the chance of getting help from Tonberrys, Moogles, Chocobos, Cactuars, Magic Pots or Cait Sith.  Assistance from friends is also possible, and heightened emotions increases the chances of using them.

Emotions play a huge part in this game, and the dating scenes between Zack an Aerith are fun to watch and take part in.  Those who have already played Final Fantasy VII (that is the recommended order) will know how this tale will end and the ending is very bloody and touching at the same time.  Like many gamers before me, I actually shed a few tears.  Besides the blood, the only other things worth noting is the minor swearing and that Tifa was still well endowed back then too.  In Nibelheim, Tifa is wearing an interesting cowgirl outfit. Some other female characters are seen in bikinis. 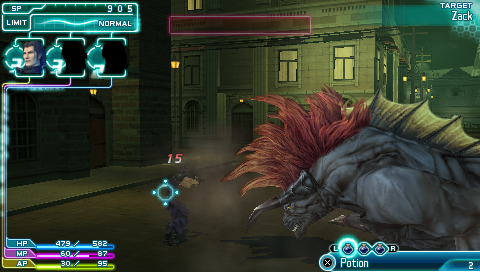 Besides Tifa, the other character models are well detailed and the CGI animations are breathtaking to say the least.  The summons  are absolutely stunning and skip-able if you’ve already seen their attacks too many times.  For a PSP game, the graphics are fantastic. However, if you look closely, you’ll see some jagged edges. This mostly depends on the size of the screen and what model you’re playing it on.  While there is a fair amount of variety in the missions, some of the levels don’t match their descriptions.  For example, a mission will ask that you eliminate monsters in the slums but you are taken to an open field instead.

The missions themselves can be repetitive and rather restrictive when it comes to exploring.  Some exploring is encouraged and you’re typically rewarded with treasure chests for doing so.   Many levels have lots of enemies while others only have one to fight.  Overall there are three hundred missions to play and the majority are unlocked as you complete prior ones.

I only played about a third of the optional missions and clocked in close to thirty hours.  Compared to the epic storyline, the side missions were just not as much fun.  Another reason I progressed with the storyline was that my character was getting too overpowered.  I found the last area relatively easy for a mid-thirties level character.  Then again, I was used to playing Hard and Very Hard rated side missions.  Once the game is beat, Hard Mode becomes available.

With that said, there’s plenty of challenge and adventure if you've got the time and the drive to complete every mission.  I found the story and beautiful movie scenes rewarding enough, though I could have done without the blood or bikini clad ladies. Thankfully, the language was much milder than Final Fantasy VII.  I have seen Crisis Core on many top PSP game lists and can understand why it’s there.  I’m glad I've played it, even if it made me cry at the end.