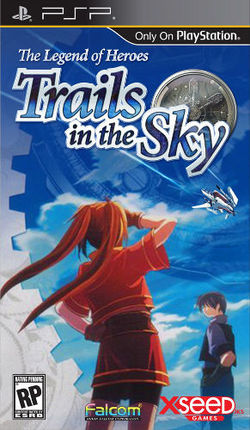 Ten years ago, Estelle lost her mother when her town was attacked in a war.  Her father was a high ranking commander in the war, but left the army to be with his family.  He later joined and advanced in the ranks of the Bracer’s Guild.  He’s often away on trips, and the game starts off five years ago when he comes home with a badly injured boy named Joshua, whom they adopt and treat as family.  Fast forward to the present day, where Estelle and Joshua are both sixteen and training to become Bracers.  Their father, Cassius, is leaving town for a Bracer job, and wishes his kids luck on becoming junior Bracers.

The Bracer’s guild is like an honorable mercenary group.  Available jobs are posted on a bulletin board, and completion of the jobs will earn them money (mira) and Bracer points to advance in rank.  The missions vary from exterminating dangerous monsters to helping those in need, or in danger.  Many of the jobs expire if you put them off too long.  The main storyline is so engrossing that I often got caught up in it and missed out on a few jobs.  Some job opportunities are not posted on the bulletin board, and you can discover them by exploring and talking to everyone in town.

Exploration is also rewarded by finding treasure chests scattered around the wilderness.  Many treasure chests contain healing potions, but others guarded by monsters contain enchanted artifacts.  Like many RPG’s, you can customize the armor and weapons of the characters.  The weapons are predetermined, but upgradable. 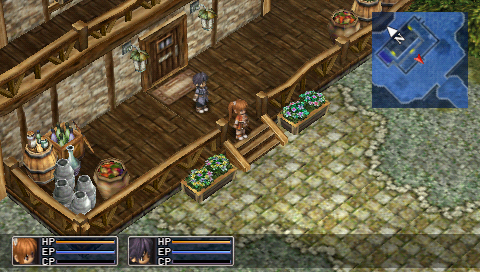 Estelle wields a staff and Joshua fights with two knives.  Other party members will use swords, guns, and whips.  When a party member attacks or is attacked, they will accumulate craft points (CP).  After one hundred CP is accumulated, a powerful S-Craft attack is unlocked.  The attack is even more powerful if you max out to 200 CP.

Besides these physical attacks, orbal magic is available and customizable for each character.  Every town has an orbal workshop where you can unlock slots and synthesize elemental orbal quartz crystals.  Each player has a limited number of slots and some of the slots only accept a certain element.  Each element offers unique abilities; for example, the water orb crystals enable healing and water based attacks.  Some of the crystals enhance the player’s stats by giving them more health or magic points, or speeding up their attacks.  While the orbal arts are powerful, their biggest drawback is that it takes time to cast the spell in battle.

The battles are fast paced and turn based.  The attack order is determined by how the battle was initiated.  If you’re attacked from behind, the enemy will have the first strike, and vice versa.  When it’s a character’s turn to fight, you can move, do a regular attack, a craft attack, orbal arts, or flee.  From my experience, the flee option has a 100% success rate.  If you do choose to fight, you’ll find that many but not all of the enemies have an elemental weakness.  The bosses have unique and powerful magic attacks including the ability to summon healing drones and split themselves apart (for more attacks to your party).  I was able to conquer most of the bosses on my first try when I had my CP maxed. 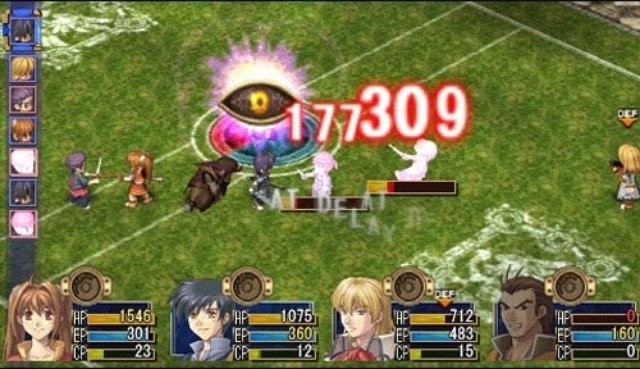 Recovering your health can be done by consuming healing balms or food.  When you eat food, you’ll learn the recipe and can make it, provided you have all of the ingredients.  Recipes come in two variants: sit-down meals, and snacks.  Meals will heal the whole party, and will be consumed right after you make it, where snacks can be eaten at any time and only heal one person.  Besides health points, many snacks heal ailments inflicted in battle, like sleep, faint, confusion, and paralysis.

The attacks are nicely animated and fun to watch.  The S-Craft attacks are very anime-like with the character taunting and attacking.  My favorite was watching Schera do her sadist whip attack and giggling, while saying “Someone’s been naughty!”; it made me smile every time.  The cut scenes are nicely animated.  Any anime lover will appreciate the artistic style in this game.  The orbal magic has a lot of eye candy with its fluid and colorful animations.

If you don’t like the taunts you can disable them.  I found the taunts humorous, but I couldn’t understand a couple of them.  For the most part, the background music is enjoyable.  Some of the battle songs seemed more fitting for an aerobic workout than a fight though.  When your character is low on health, the background music will speed up into a panic rhythm.  The tune that Joshua plays on his harmonica is very soothing and redeems the audible gaming experience. 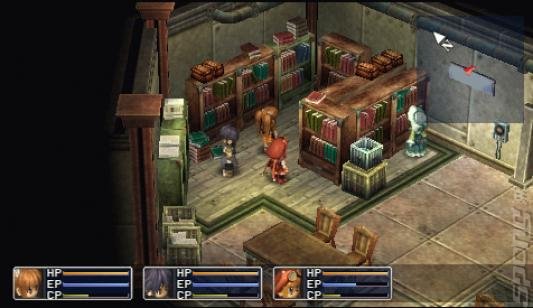 Joshua isn’t the only musically gifted character.  Later in the game your party will run into Oliver, a flirtatious bisexual traveling musician.  Even though he annoys Joshua and Estelle, you can’t knock his orbal art skills and gunmanship.  Schera is another interesting character.  She’s Joshua and Estelle’s mentor, and she’s known for her drinking habits.  She also invited the underage Joshua for a drink and to “break him in” in other ways.  ***spoiler alert*** Joshua refuses since there’s a blossoming romance between him and Estelle.  (I found this rather awkward since they are adopted siblings.) ***/spoiler alert***  Lastly, there is quite a bit of foul language in this game.  While there are no F-bombs, every other word is thrown in for good measure.

Legend of Heroes: Trails in the Sky is a blast to play, but it’s riddled with appropriateness issues that makes me hesitant to recommend it to everyone.  RPG lovers will enjoy the story, characters and battle system offered in this title.  The Legend of Heroes series has been around for a while and this is arguably the best of all of them.  I haven't played any of the others in the series but this game has the highest score on secular review sites. It’s a shame that the sequels may never hit the North American shores.  From a Christian perspective, perhaps it's best to pass on the sequels.