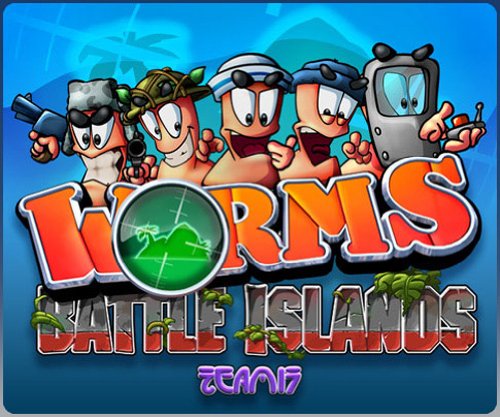 Thank you Team17 for giving us this game to review!

The Worms series has been around since 1995, and this is my third time playing a Worms game.  Battle Islands is very similar to Worms Reloaded which I reviewed not that long ago.  While there isn't really anything new added, I enjoyed the portability of the PSP version.

The objective is simple: you must annihilate the other team of worms before they wipe you out.  To defeat the other worms you have to drain their hit points with weapons or knock them into the water to drown them.  This is a turn based strategy game and you can't quick save, so make your turns count!  You do have the option to skip a turn if needed.  The winner is determined by being the last one standing or by having the most collective hit points before the level time is up.  By default you have twenty minutes per level and you get gold, silver or bronze medals by defeating all of the worms sooner. For those who like challenges, there are several optional time attack and puzzle levels available.

The weapon selection varies based on the campaign mission you are playing. The staples include bazookas, mines, dynamite, grenades, frag grenades, shot guns, ninja/grapple ropes, jet packs, parachutes and teleporters.  Pretty much all of the weapons are carried over from the previous games. The only exception is the ultimate weapon that you get to build by collecting blueprints.  All in all there are over thirty weapons to dabble with and try out.  Some of the more powerful weapons include the Holy Hand Grenade, Armageddon, Air Strike and Bunker Busters.  Exploding sheep and buffalo add even more variety. 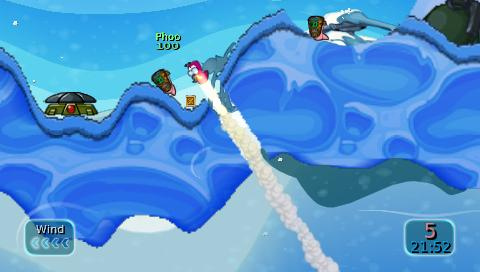 Many of the weapons are pretty straightforward to use.  For example, dropping a mine or a dynamite stick on a foe doesn’t take much skill. However, some of the other weapons are a bit more complex.  When you're using the bazooka or throwing a grenade, you have to consider the trajectory and the strength and direction of wind (which changes every turn).  The shotguns are easy as they have a line of sight but the uzis are hard to aim since the recoil is nasty.

The single player campaign has thirty missions divided by six different themed islands to conquer.  Each island has four levels with a boss/challenge level to conquer before you can play the next island.  Every level has an optional blueprint that you can collect to build an ultimate weapon.  These blueprints can be destroyed; fortunately you can go back and replay the levels if you’re a perfectionist (I’m not).  Besides blueprints, you can unlock new hats for your worms to wear, victory dances, skin colors, grave stones for when they die, and voices.  Most of the levels pit you against an opposing team of worms but an occasional puzzle challenge is sprinkled in for variety.

Multiplayer is a blast and you can play locally, online, or against the A.I.  Since my PSP isn't compatible with our wireless network, I can't comment on how easy or hard it is to find other players.  There are several multiplayer modes including Deathmatch, Ninja Rope Racing, Forts, Tactics, and Triathlon (best of three matches).  You can have up to four players in a match.  The Tactics mode is just like the campaign where your goal is to take over the island and you can use tactics including recon the landscape, stealing weapons, calling an early air strike, and so on. 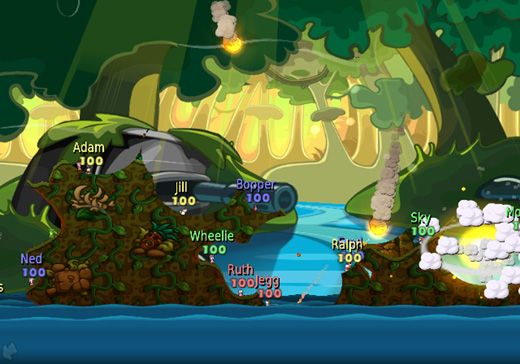 The voice acting is top notch with a wide variety of built in personalities including crazed war veterans, ditsy blondes, secret agents and George W. Bush.  They’re bound to say something funny every turn, but the phrases are limited and get old after a while. The screams the worms make when a mine is placed on them still cracks me up though.  The weapon sound effects are fitting and the explosions are spot on.  While I remember the menu music I don't recall the background music, so if it’s there, its forgettable.

The 2D graphics are extremely well done. The various themed backdrops are colorful, funny, and captivating.  Some of the themes include desert, jungle, and a nuclear power power plant.  The worms have various looks and expressions that make them likable.  The physics seem pretty accurate and the aim bots are deadly with their precision.  They occasionally mess up by missing or friendly fire (including themselves), but don't count on it!

While the bright colorful backgrounds and funny voices lure my kids to my PSP while I play the game, I would exercise caution before buying this game for a child.  It's obviously violent but in a cartoon fashion not much different than you would find on TV cartoons.  Whenever there is an explosion you'll see a comic book "Boom!" or "POW!" and so on.

With that said, this is an extremely fun turn based strategy game that has tons of replay value.   It’s a great pick up and play game.  Multiplayer is bound to bring endless hours of enjoyment and with an asking price of $20 this game is well worth the money.