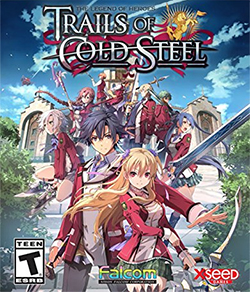 Thank you XSEED Games for sending us this game to review on both PS3 and PS Vita!

Trails of Cold Steel takes place concurrently with the fourth and fifth games, and the story is independent enough such that this is a decent place for new players to start.  Having played Trails in the Sky FC and SC already, I did benefit from understanding additional lore, as well as background on characters and secret organizations that new players may not get.  Nevertheless, being the first game in a new trilogy, this is a decent place to start.  It is also by far the most modern entry, as The Legend of Heroes has come a long way since Trails in the Sky.

Trails of Cold Steel has you following the life of Rean Schwarzer, a new student at Thors Military Academy, and the de facto leader of Class VII.  This class is newly created this school year, using a different set of rules than the other classes.  Classes I and II are all noble students, while classes III – V are students of commoner background.  Class VII is different for a few reasons, and having mixed background students is only one of them.

These differences make for some interesting characters and interactions, as well as more than a few clashes.  But as these are dealt with, you get to see them become a very tight knit group, and grow as human beings.  Falcom has a knack for writing wonderful characters, and this game is certainly no exception.

Despite the somewhat anime trope-ish setting in what boils down to a high school, it's really hard to overstate how wonderful of a build up this game does in first introducing and making you fall in love with the characters, then slowly revealing the conflicts boiling just under the surface of the world, and then putting you into the middle of it all.  The world building and storytelling is simply masterful, and you just can't help but keep coming back for more once you start playing.  When I really like a game, I tend to be meticulous and make sure to talk to every NPC and get everything.  This was one of those cases.  It took me just over 135 hours to beat the game on my first playthrough, and I looked forward to every minute of it. 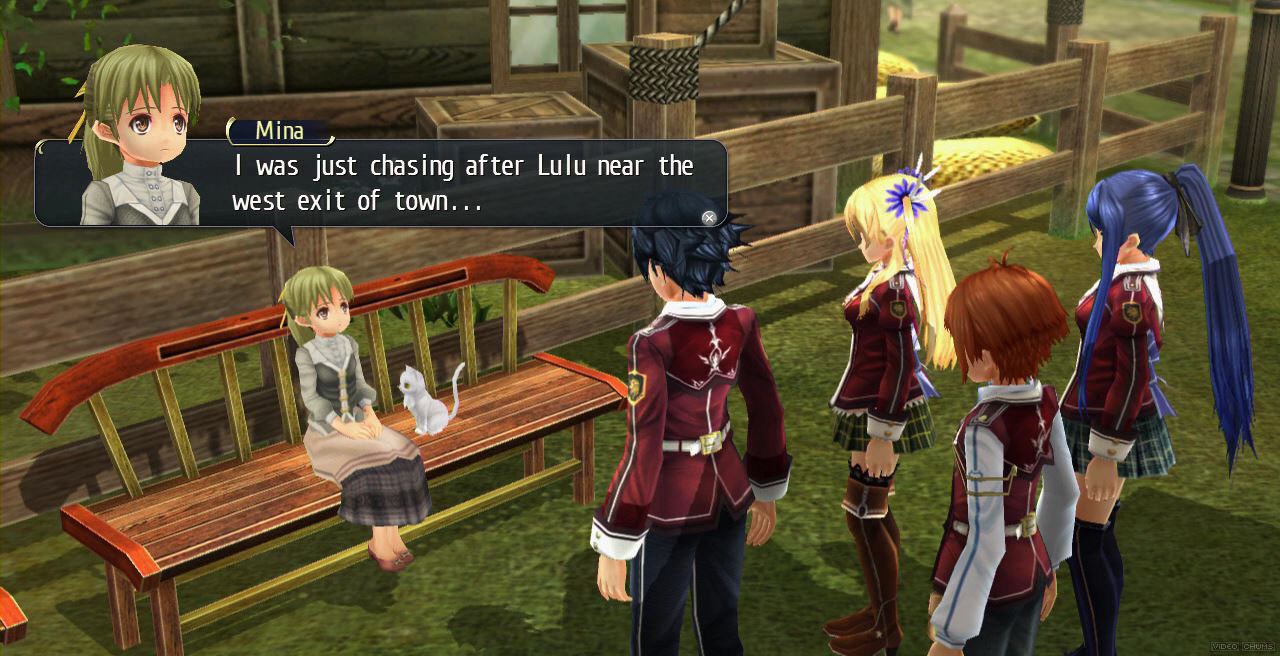 Strong Points: Fantastic world building, storyline, writing, voice acting, characters, and music; fun battle system; very long adventure; draws lore from previous games
Weak Points: Occasional frame rate drops, especially on the PS Vita version
Moral Warnings: Fantasy violence, with occasional blood; magic use, in the form of quasi-scientific orbments; heavy alcohol and tobacco use, including by role models; alcohol is offered to player (he turns it down); lots of conversation loaded with sexual innuendo or even upfront suggestive dialog (though no sex takes place); foul language, using words like 'd*mn', 'a*s', and 'sh*t'; several lesbian characters, including one who makes other girls feel uncomfortable with her directness, and is known to make boys sad with her skill at picking up girls; an older pervy grandpa is present; goddess Aidios is the main monotheistic deity, and other regional spiritual ideas are introduced, like the winds and spirits; vampires are present in a lore book

The game switches between more character focused school days, where you get to bond with your classmates, and talk to pretty much everyone on campus if you so choose, and field studies, where you get to go out into the world and solve problems for citizens as part of your course curriculum.  You also have the opportunity to investigate an old schoolhouse, as well as help and protect people, which leads to plenty of opportunities to put your new ARCUS to good use, fighting lots of enemies along the way.

The ARCUS is a new orbment system that differs significantly from how they worked in Trails in the Sky.  Each character also uses a unique weapon and crafts, which are special skills only usable by that character.  The ARCUS units allow you to use arts, which is similar to magic, and also use link attacks, where you and a partner can double attack (or more) each turn if you unbalance the opponent.  Honestly, while I would have preferred it if they had kept the quartz link system for spells (so you wouldn't have to choose if you wanted the stronger or weaker versions of spells because of extravagant EP costs), the new system works well.  It sometimes requires tough choices, as no one character can do everything, so each still has roles to fill.  Sometimes you may want to optimize for physical attack strength, magic attack strength, speed, or some other effects.  The ARCUS system allows you to do this, and more.

The battle system is fully turn based, with each character and opponent shown in a list on the left, with various bonuses or detriments that will happen on that turn when it's up.  If you don't like what is coming, there are plenty of ways to adjust the turn order, including casting arts, or simply using crafts that delay the opponent.  Some attacks and other abilities also target a specific range, so placement on the field can also be really important.  It's a system that works really well.  It's a good, straightforward improvement over Trails in the Sky's battle system, and the fully 3D rendered battles also look great.

The Legend of Heroes: Trails of Cold Steel, is in many ways an excellent evolution over what Trails in the Sky started ten years ago, in 2006.  But, just like that game, which pushed a few odd social paradigms (adopted siblings falling in love, bisexual characters), this one does as well.  And given the teenage characters involved, there is also a lot of suggestive language and situations.  Now, where to start, there is so much to talk about here…

It has to be said that the main character, Rean, is a perfect gentleman for the most part.  He does notice a few characters and their 'assets', but he makes efforts to get his mind onto other things and stay respectful.  But not all others, male or female, do the same.  There is everything from the stereotypical anime pervy old man, to the rather odd fascination some girls (and women) seem to have with romance novels about young boy lovers.  And of course, a sister has feelings for her adopted brother, though thankfully in this game those feelings are not returned.

There is plenty of suggestive dialog to go around.  From a flirty instructor who offers to kiss guys on the cheek, to a 'show dem t*tties' line to more ridiculous lines like 'does a large chest make it harder to climb ladders?'  There is a boy who's specialty is taking pictures of girls, and the old pervy grandpa commenting on the 'smoldering homeroom hotties'.  And that's only the beginning, for there is a ton of same sex stuff as well…

A vast majority of the same sex lines revolve around a particular character, Angelica.  She is a rather aggressive (and funny) second year student who is rather famous for breaking the hearts of the male population by building her own harem before the guys get a chance to get to them.  She's rather unorthodox in more ways than one, as she refuses to wear the girl school uniform and is always in full clad leather.  Some of the lines she says are admittedly very funny but… very inappropriate.  It ranges from stuff like wanting to get 'intimately acquainted' with the new first year girls, to crazy lines like 'It's not like I spend all my time on the prowl for beautiful maidens to deflower,' and 'I'd like to press my delicates onto that ironing board'.  She has also been known to take liberties with girls (like nuzzling against them) that guys would never be able to get away with. I can say this though: you can really tell the localization team had a great many laughs writing some of these lines. 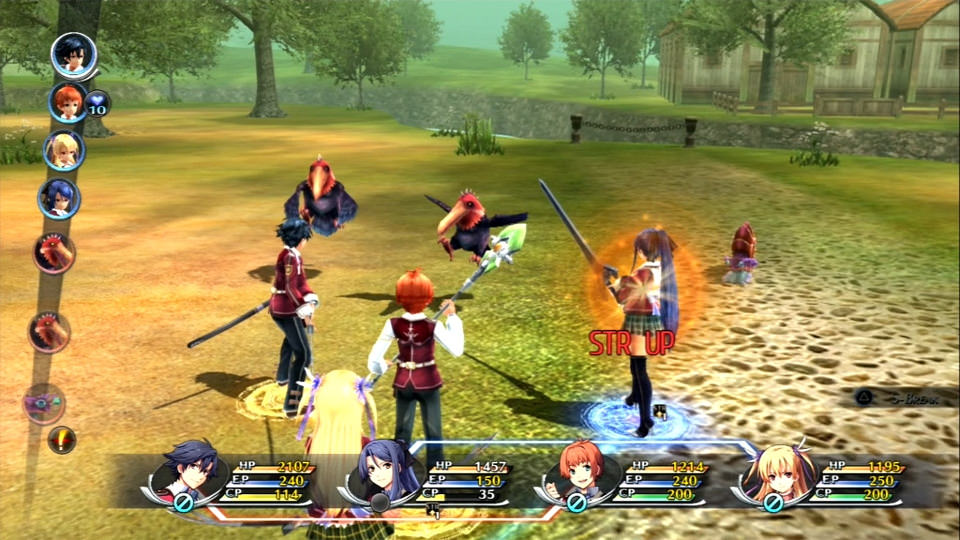 There are other characters who say some rather odd or outright homosexual things as well.  A good friend of Angelica says something like she 'took me for a ride the other day… on her bike, I mean'.  One guy says to Angelica that she should stop feeling up lady luck after a particularly lucky break.  A different girl also comments that she wants a handful of another girl's dynamite body.  The game also seems to follow the trope that strong women naturally attract other girls.  One of the main characters, Laura, is a very powerful warrior, and is the daughter of perhaps the nation's most famous swordsman.  The girls in the town are rather protective and jealous of her, and won't let any men get near her.  Another strong warrior girl has other girls wanting to stroke her hair, almost involuntarily.  One other thing I noted is that when a lady steps into the room of girls reading the boy on boy love books, they ask if the guy she is looking for is a 'pitcher or a catcher'.

Other suggestive or awkward situations also exist.  Some characters made a big deal out of mixed gender bedrooms in one case.  Honestly, there are so many lines that are loaded with innuendo that I simply stopped taking notes.  Now, it's not to say that they are constant, after all this is a very long game, but if it isn't already incredibly obvious, this game is not for children, or even teens in many cases.  If there is any uncertainty, just please don't.

There is a fair amount of PG-13 level language as well.  Words like 'd*mn', 'a*s', 'sh*t' are present.  There is some blood, but it is not common, and mostly used in cut scenes.  There is plenty of fantasy violence and magic.  Undead and various ghost-like things, including demon spirits, are present.  The Trails' world has a monotheistic goddess named Aidios, with many of the trappings that make it rather similar to the Catholic church.  Unlike previous games that I have played, this one explores other beliefs that exist outside of Aidios, like local animism to various regions.  Some regions believe in the 'wind', and others believe in the 'spirits'. They didn't go into too much more than that.  One of the animistic symbols looked a lot like a Celtic cross.

Now, on to more pleasant topics.  The graphics are good but not great.  It's a fully 3D rendered game world, and the resolution is a bit low, but it works.  Both the PS3 and PS Vita version experience framerate drops at times, but the Vita is far worse in that regard.  But it's nothing that greatly detracts from the experience.  I would say it's more than made up for by the really great soundtrack.  Falcom Sound Team jdk just can't make a bad soundtrack.  Every one that I have heard has been excellent.

The Legend of Heroes: Trails of Cold Steel is in many ways an excellent RPG.  It has wonderful characters, an interesting and engrossing world, and a very enjoyable battle system.  The voice acting is excellent (though it's only partial, not fully voice acted), and the writing and localization is of top quality.  It even has decent replay value, with a New Game+ mode.  The clear save data can also transfer to the eventual release of Cold Steel II.  It's a must play for Trails fans.  But it has to be said that the appropriateness issues are many, so please consider this carefully before making any purchasing decisions.  Do not buy this game for your children!